Back in the Bay Area, if someone had described to me a place where Bald Eagles huddled on every utility pole like pigeons or Starlings, I would have thought it must be Alaska … or somewhere along the Samuel Morse telegraph lines of the mid-1800s. I didn’t expect that just two hours north — through the Peace-Arch crossing into British Columbia, toward Vancouver — I’d have a one-eagle-per-pole morning.

I lived in Vancouver in the early 80s, for just a year, and don’t remember eagle calls overhead as I walked the Stanley Park Seawall each day. But on our most recent visit to the park, we counted six Bald Eagles in the first two miles of our walk — two of whom were [not so] politely escorted out of town by a group of crows and gulls.

These two were at the very far reach of my lens at sunset, chatting above the Seawall path. 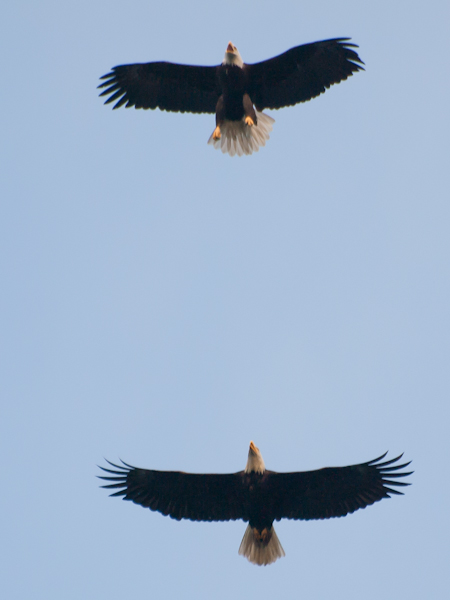 Bald Eagles nested and wintered in British Columbia at that time, of course, with large concentrations grouped around salmon spawning and eagle breeding grounds. But, the 1980s were also a time of significant population recoveries overall, with south-Coastal B.C. numbers quadrupling between the early 1980s and late 1990s.

According to Environment Canada, the wintering number of Bald Eagles in 1981, about the time of my residence, was just below 60. Compare that to the 1996 figure, peaking close to 180. The same report describes how salmon declines in the U.S. might have affected a redistribution of eagles northward.

On Fir Island and around La Conner in Washington — another great, winter viewing site for Bald Eagles — you’ll find the eagles clustered in trees and bathing in flooded field ditches. We saw trees full of eagles in B.C., as well: 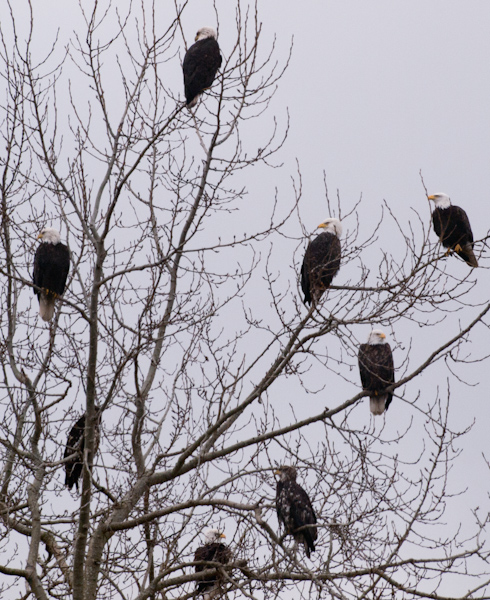 Occasionally, they swooped down to take [mostly] failed swipes at other birds. I talk to quite a few people who don’t realize how often raptors don’t catch their intended prey, as these eagles often miss the geese, gulls and ducks they’re after. High mortality and starvation are realities for birds of prey, especially first-year juveniles.

In looking for the B.C. stats above, I came upon this CBC article from 2011 … about Bald Eagles raiding trash and landfills in British Columbia, because they were starving for the weak chum salmon run.

Utility pole perches make sense, because the poles have large resting surfaces, and are handy overlooks to adjacent fields, where gulls rest and ducks dabble. We saw quite a few instances of eagles chasing, but never catching, the gulls who outfly them like little Jonny Dorrs. The eagles then land in the mud and sit among the gulls who ostensibly know that a sitting eagle is usually not a dangerous eagle.

I wish these were better images, shot with my old lens in Pacific Northwest rain and fog. Here’s my little collection of diffused-light, utility-pole eagles … with a tiny bit of sunshine thrown in. 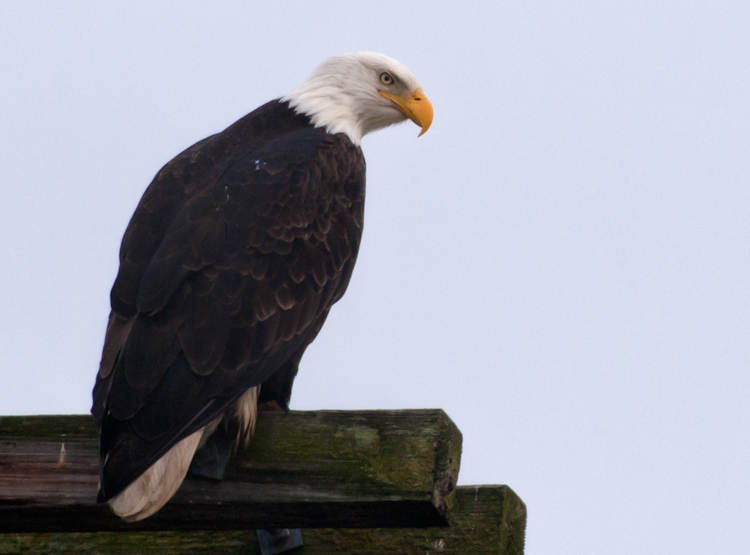 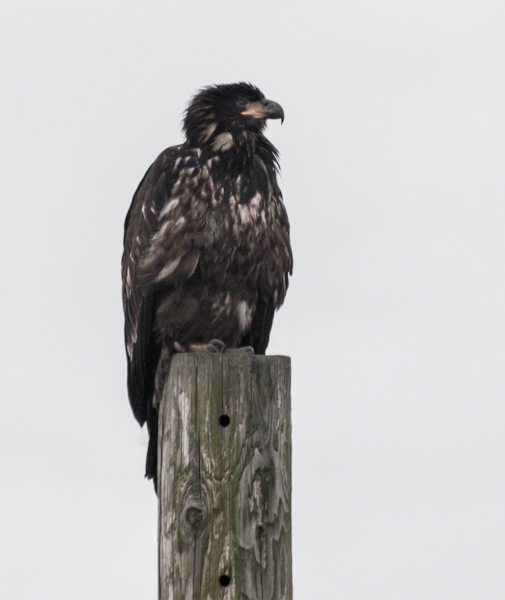 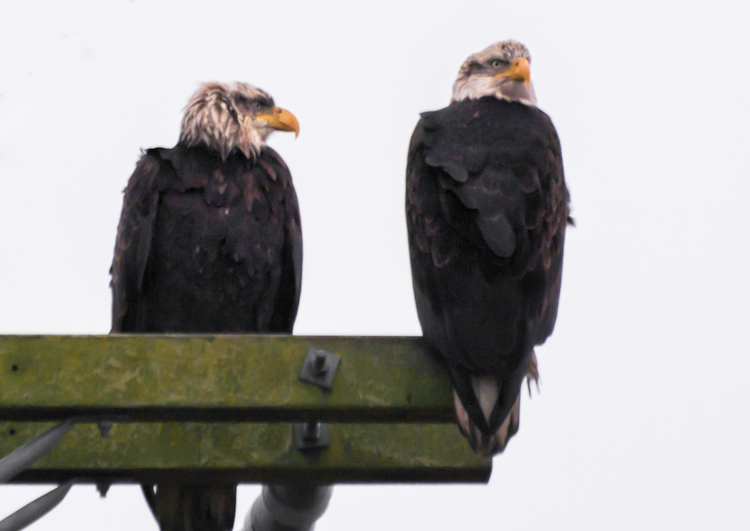 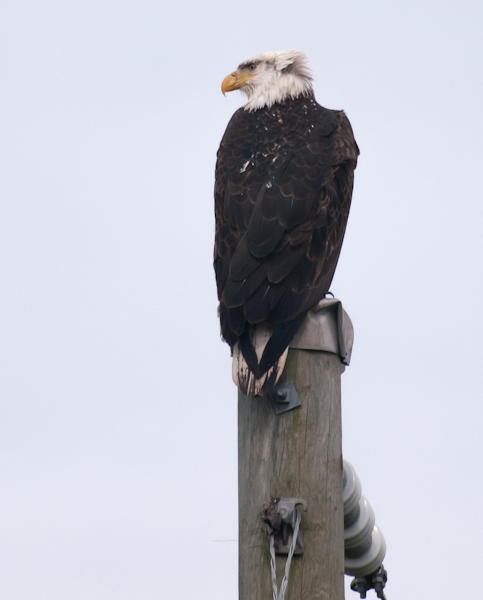 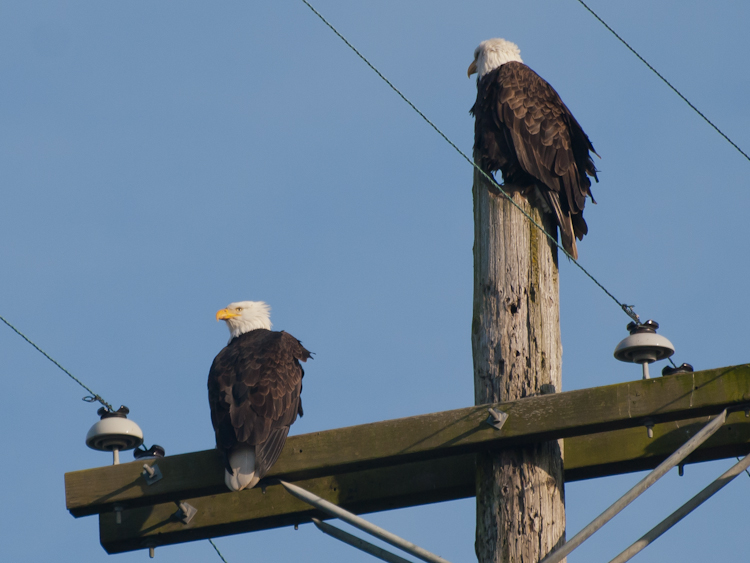 As I was looking for information on whether or not some of these utility poles have been retrofitted for Bald Eagle safety — to reduce electrocution accidents. 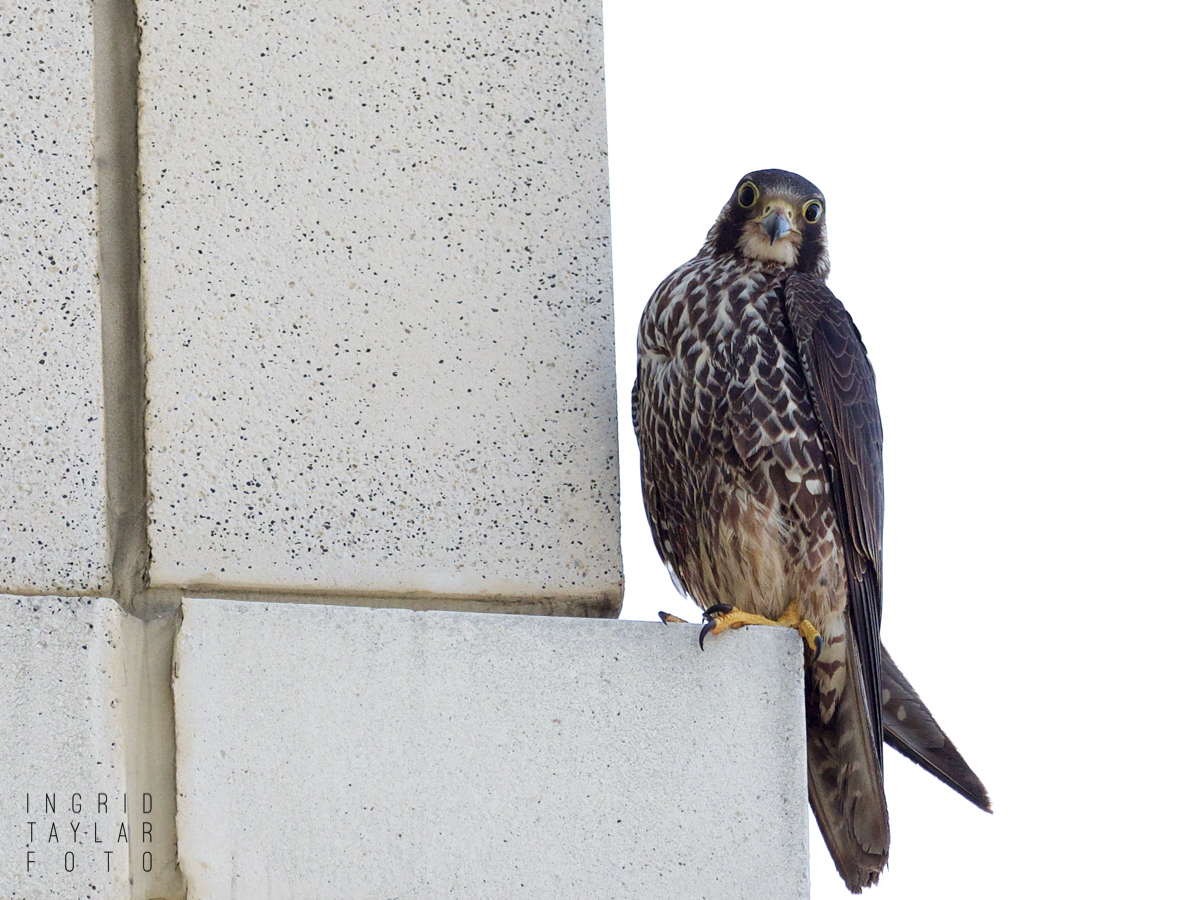 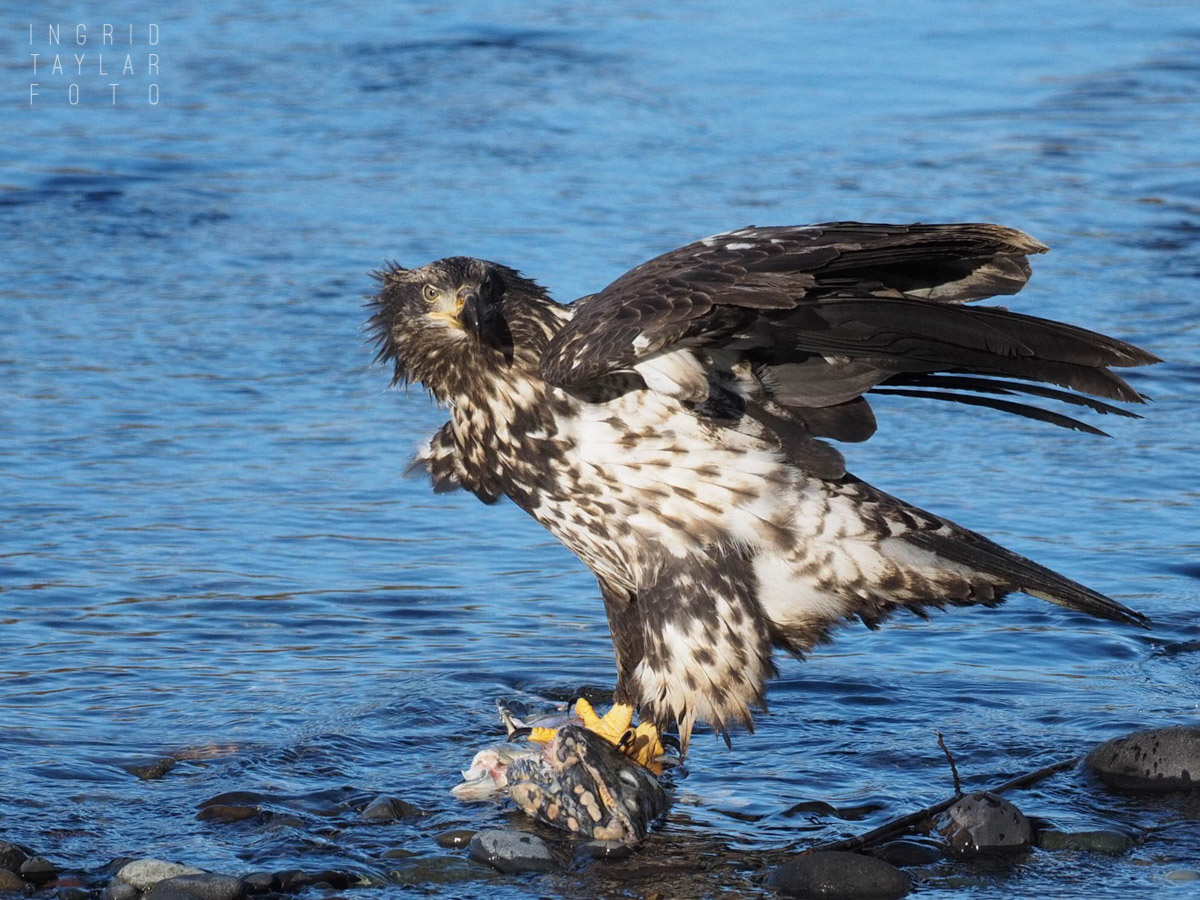 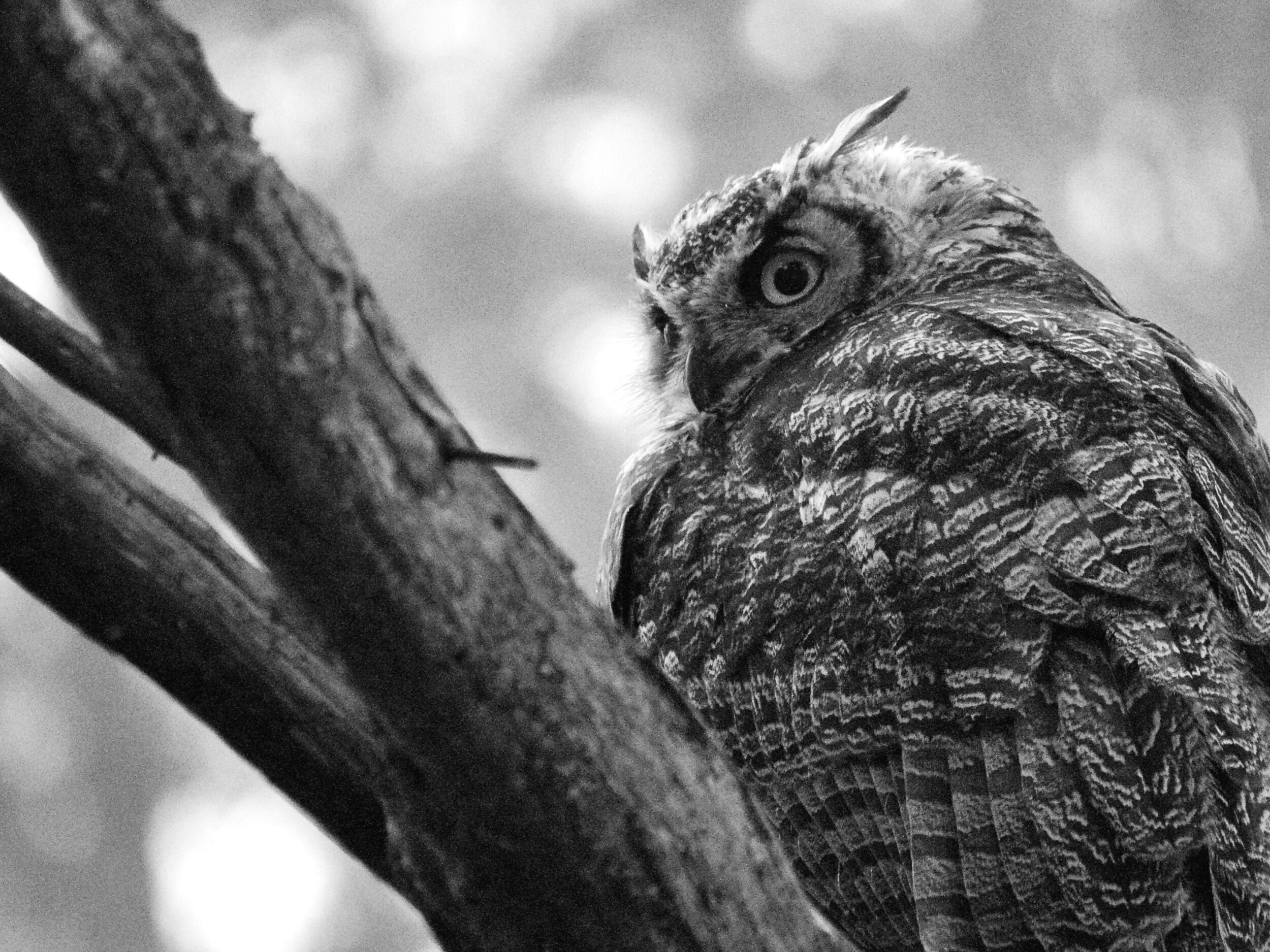