This is who we came to see in Beautiful British Columbia: 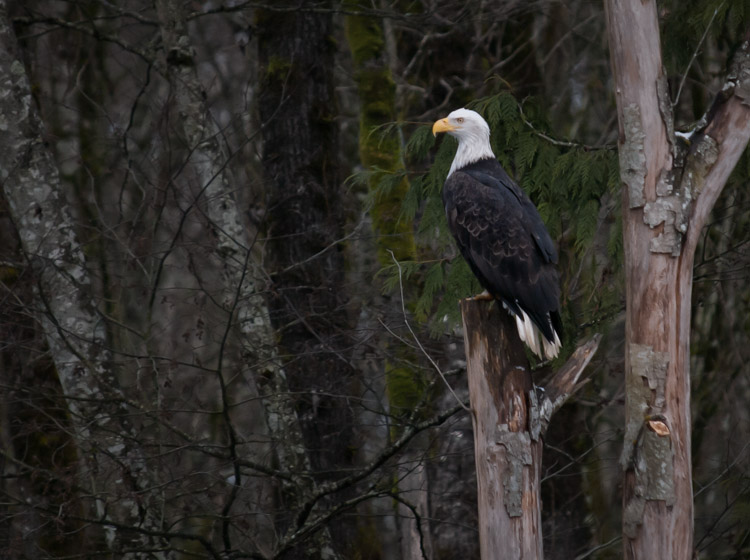 And this is what drew our eyes upward … to the gossamer-draped mountains: 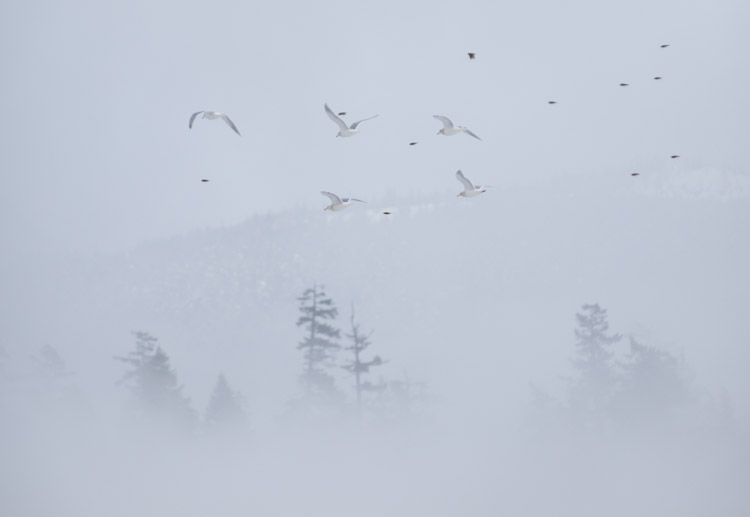 All morning, the gulls traversed the valley in regiments. First one troop would cross, then another, then a third, their numbers interspersed with sudden flushes of Starlings from the trees (the black dots you see in this frame). In the distance, we watched the gulls drop down together, on target. I was intrigued about their destination, but we had about three hours of dim daylight to meander along the Squamish River. And, the preordained event was watching Bald Eagles forage salmon carcasses from the shallows, then lumber along the shores in their wet pantaloons. 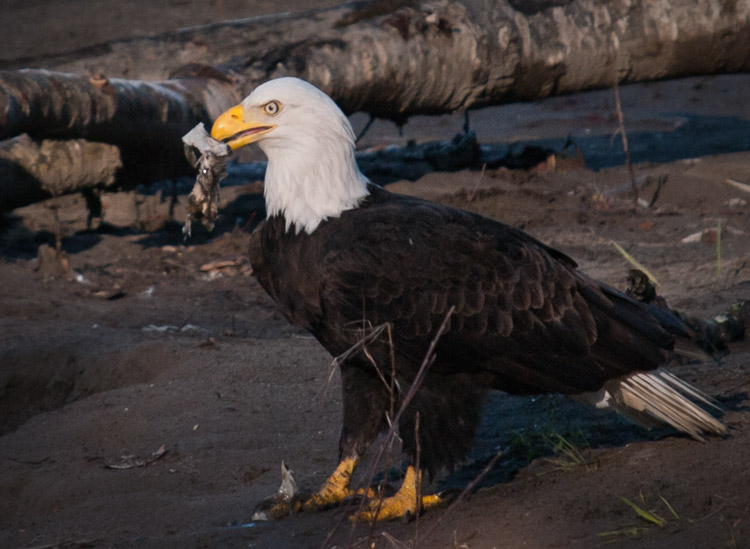 We stopped at the Provincial Park where, at the height of the salmon run, the river bed lays to rest the memories of spawned salmon, their eggs now in redds, their lives spent in a cyclical imperative to reproduce and recreate. In that act, they leave their young, insulated in sheaths with their own salmon dreams, and they leave their bodies, which then sustain as many as 137 species on the river, up the river and in the life and death cycle of this land.

On this day, the eagles weren’t fishing here. They were specks of white in wooded thickets, haunting the forest with a polyphony of chatter. 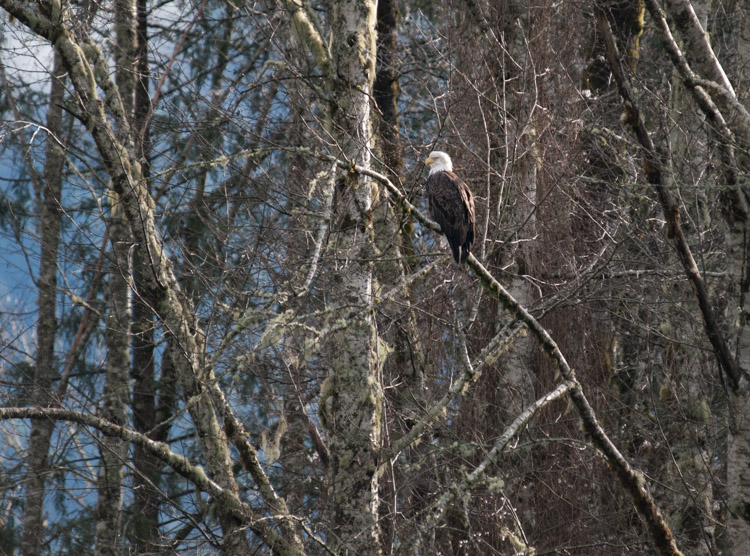 We headed north in rays of last light, and accidentally veered into a private moss grove. A faded “no trespassing” sign inspired a rapid U-turn and a change of course. 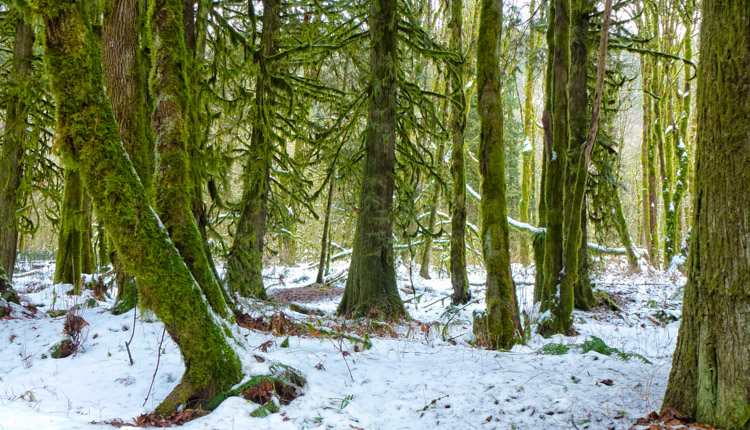 It was on this route back that we came upon Gull Central. The gulls from earlier in the day were still arriving in throngs, on target, descending like a gull party on the wires and grids of a power substation. 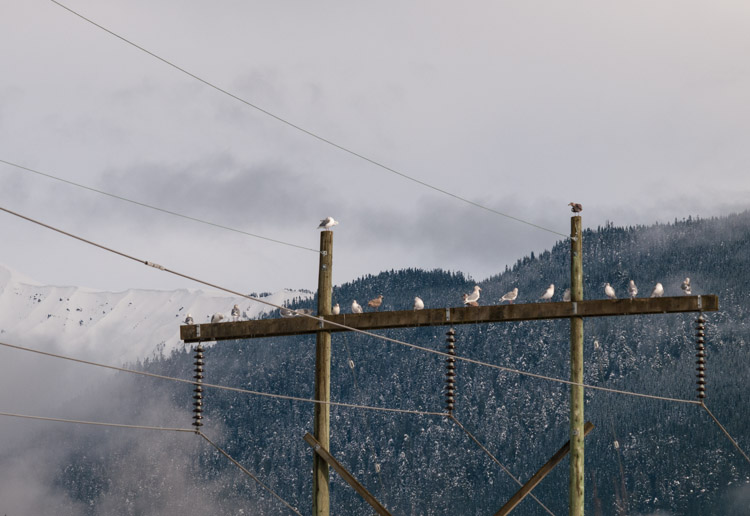 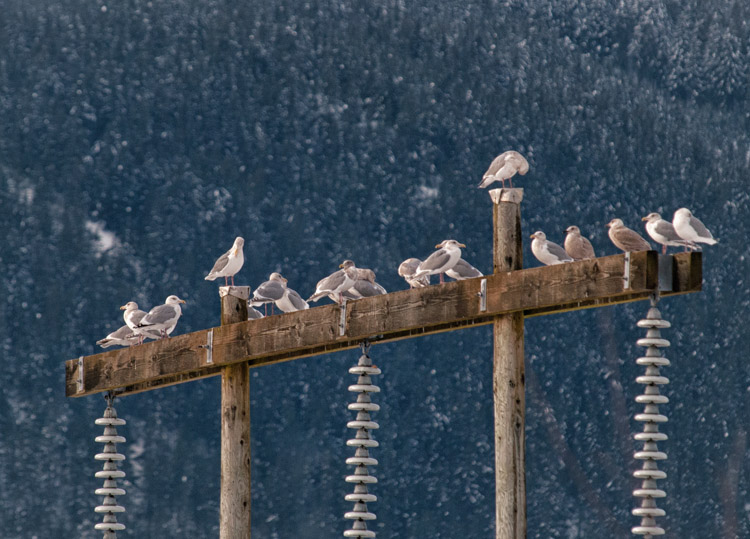 I was fascinated by the mass of gulls overtaking the grid. More flocks kept flying in for the night. When you see this many birds making a substation their roost, it’s hard not to think of the various implications, including the danger level for birds along the power trail. 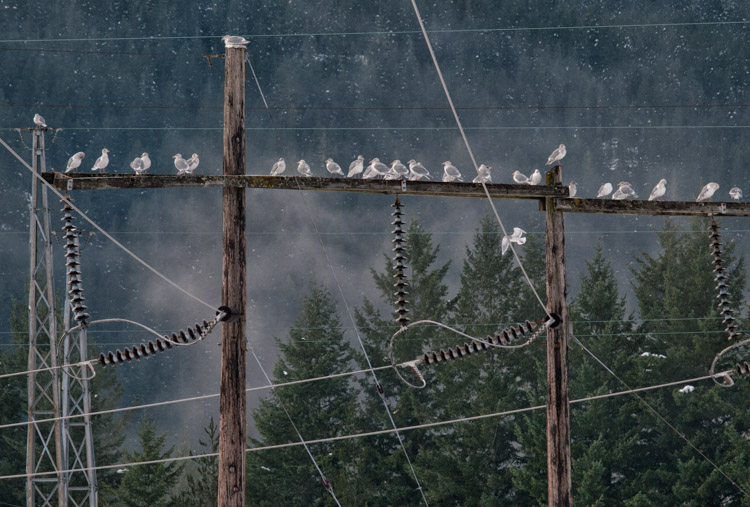 I wasn’t aware of this until I got home and researched it — you may already know — but there’s a voluntary program among utilities known as the Avian Protection Plan (APP), and also the Avian Power Line Interaction Committee (APLIC).

An Avian Protection Plan is a utility-specific document that delineates a program designed to reduce the operational and avian risks that result from avian interactions with electric utility facilities. Although each utility’s APP will be different, the overall goal of any APP should be to reduce avian mortality.

If you check your local utility website you may find they have one in place. A sample plan looks like this one from Alberta’s AltaLink. In 2008, California’s PG&E received an Audubon Corporate Achievement Award for its APP. 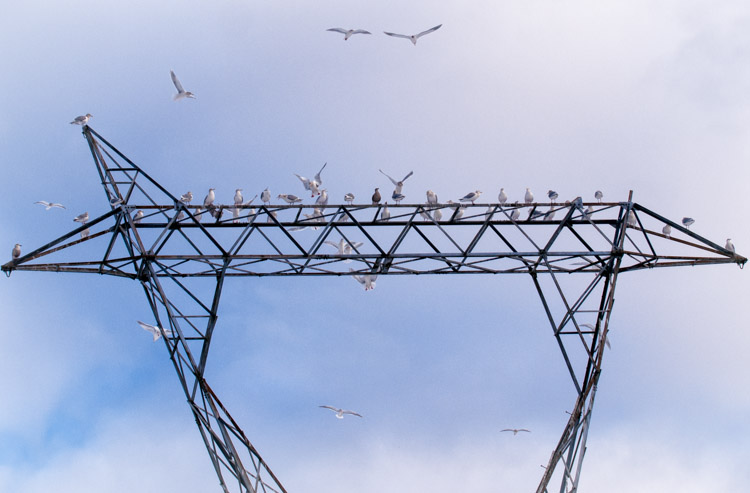 Common ways birds get into trouble around substations and lines are:

Bad weather and low visibility can increase the collision hazards. Large birds who can’t easily change flight path on short notice are most susceptible to this type of injury.

Testing is ongoing in terms of what works best to deter and protect birds, but these are among the measures tried and employed so far:

The PDFs related to birds and power lines were interesting reading for me. There’s information about the earliest bird-power collisions (Snow Geese were the first reported mortalities in Canada, Horned Larks in the U.S.), about engineering specs for wingspan spacing, perch guards and conductor safety, and also information about how the Migratory Bird Treaty Act fits into the picture of bird mortality along the power grid. The full documents are here:

I always give credit to gulls and other birds for adapting so well to our ecological intrusions — and to humans who are trying to mitigate the existing damage. It’s an imperfect adaptation, to be sure.