A few weeks ago, I walked by the Great Blue Heron rookery a short distance from our place at the Ballard Locks in Seattle. I expected to see the six or eight heron couples, draped over their nests in anticipation of egg hatching … or maybe even the first raspy calls of young chicks rustling in the alders.

Instead, this is who came my way. 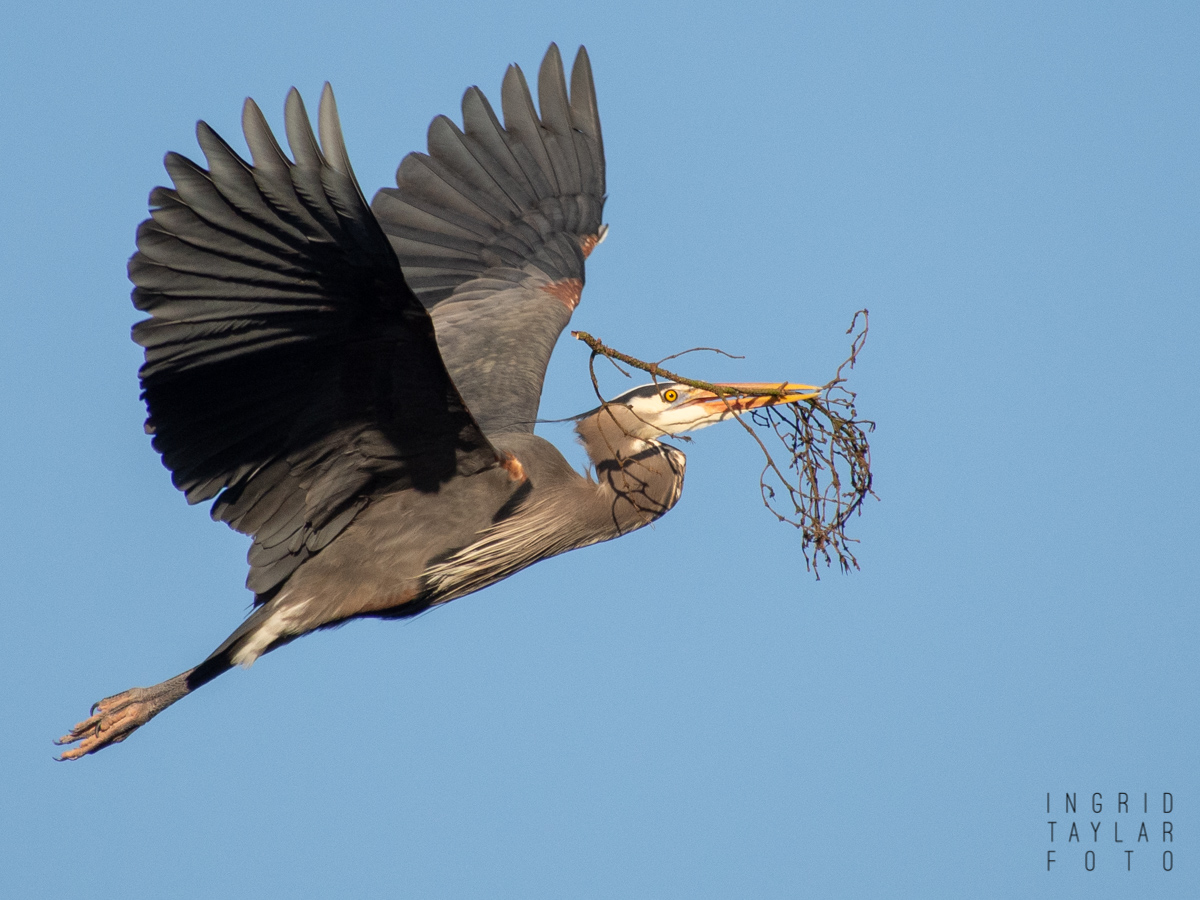 And then another Great Blue, bearing the sign of beginnings … not of hatchings. 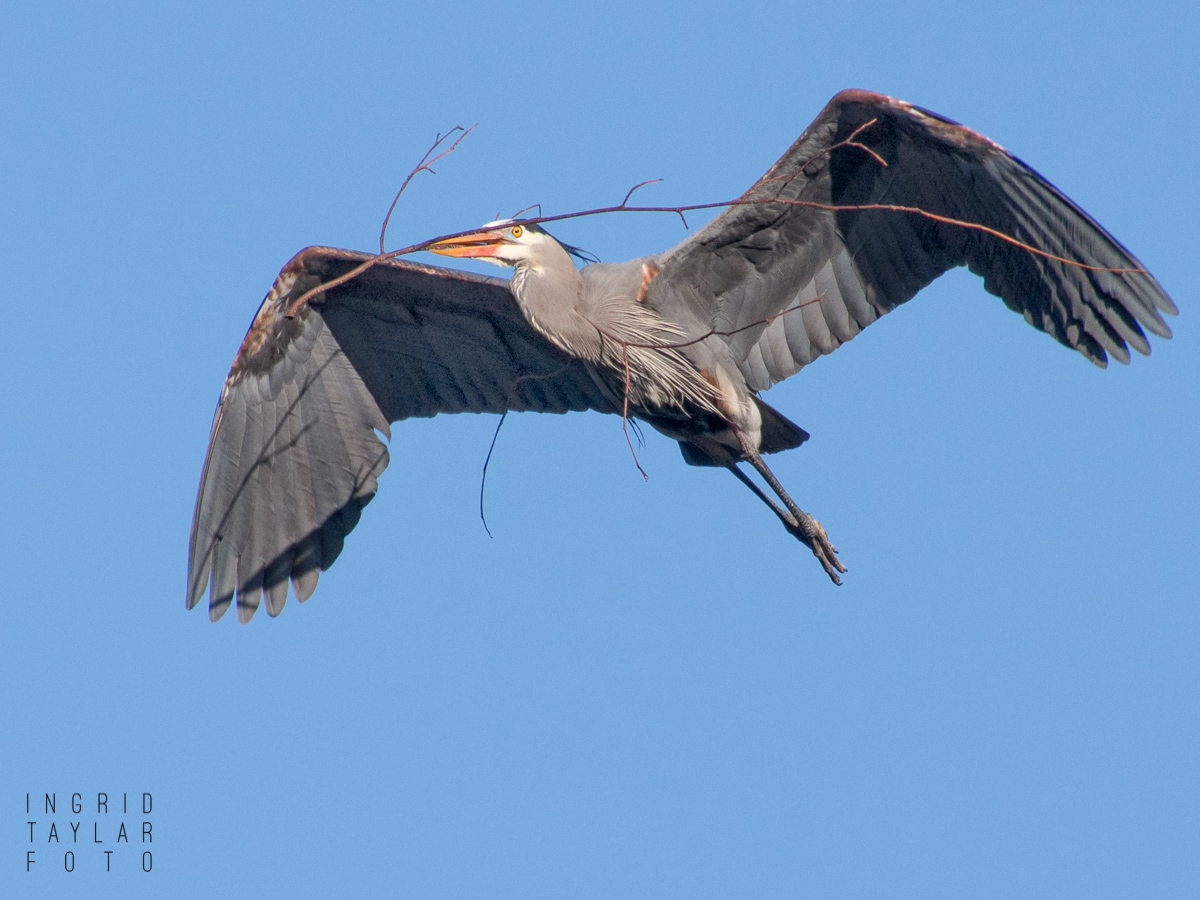 One after the other — herons flew toward their mother ship of a rookery, like birds caught in a tractor beam. 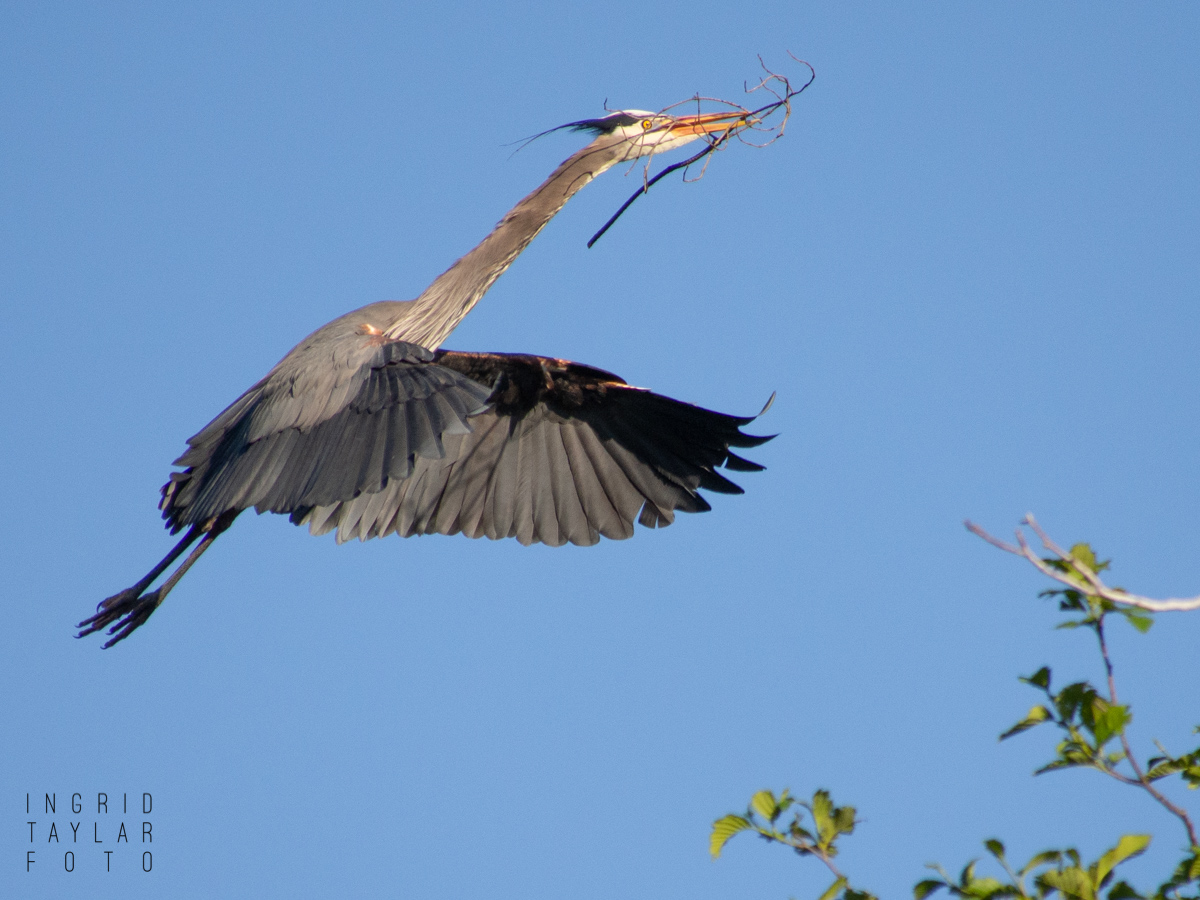 I couldn’t keep an accurate count with incoming, outgoing and circling traffic, but it was clear our intimate rookery over the promenade was quickly bursting at the leaves. 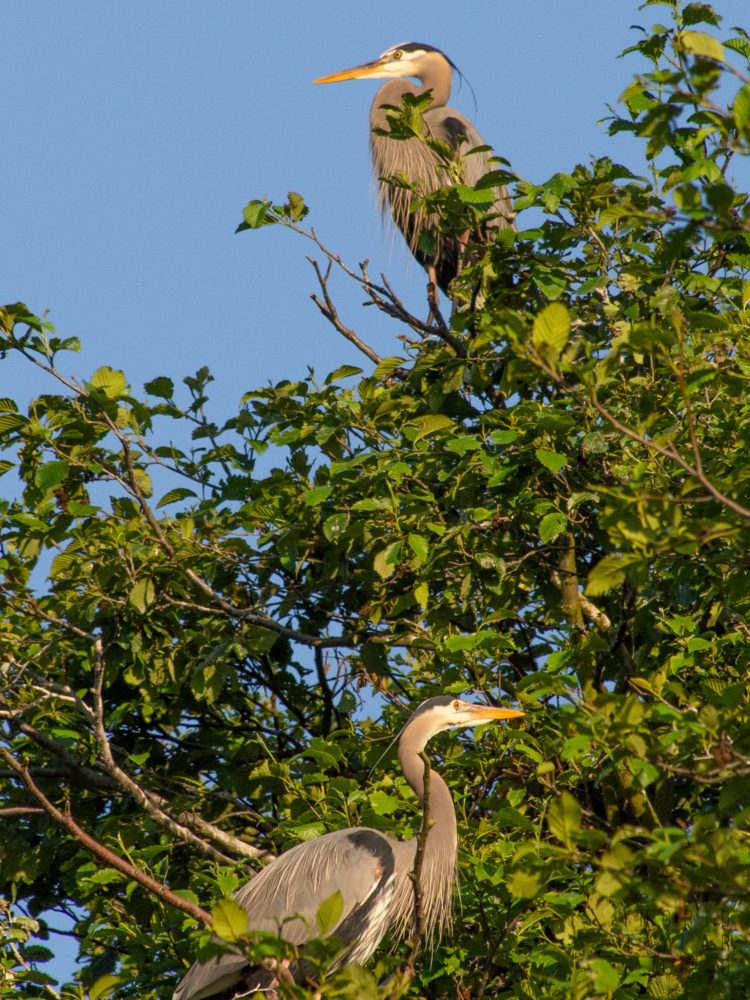 I knew something was amiss, but I didn’t know the extent of it … until I got home. I logged in with our local group, Heron Habitat Helpers and learned that the larger rookery uphill from our little public one had been disrupted by a juvenile Bald Eagle who was caught on webcam, eating some of the eggs. At the time of my checking, 70 of the 90 nests were destroyed.

My heart sank. This explained the influx of heron builders over the park promenade. 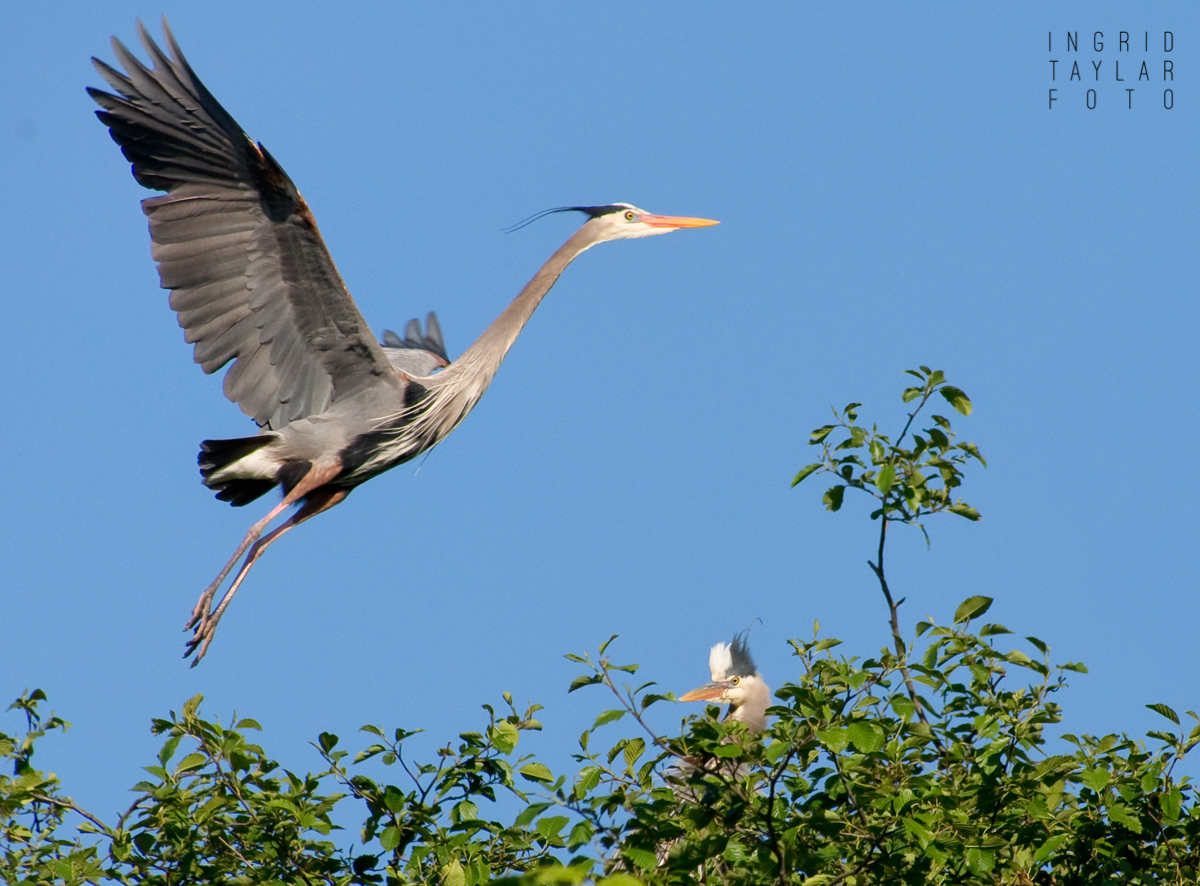 Bald-Eagle-Great-Blue interactions are not uncommon and can produce significant casualties for the herons who are mismatched, to their clear disadvantage. Other raids have occurred at this very rookery, before I moved to the neighborhood. A rookery south of Seattle in Renton was attacked by Bald Eagles after the eagles were pushed from their habitat by a development project.

Various factors contribute to increasing conflicts between these species, among them, a rise in Bald Eagle numbers combined with a reduction of suitable habitat for all wildlife, as in the case of the Renton eagles who were pushed out of their turf by a new apartment complex. Eagles are also known to be adaptable in terms of their food sources, relying more on terrestrial animals or birds when marine foods aren’t as readily available. All wild animals, including Bald Eagles, are doing their best to survive in the face of human expansion and, often, encroachment.

The issues of habitat preservation, restoration and resource depletion are the huge, overarching ones. But one heron-specific solution that’s been proposed is to place Osprey platforms near rookeries, since the presence of Ospreys can deter the eagles. Last year, I photographed this tenacious male Osprey who chased away two Bald Eagles from the cove near his nesting platform.

During the week after I first documented the branch-bearing herons, I returned to the park to watch the avian house builders again. I posted to my Facebook page that I stood for an hour that first day, mesmerized by this testament to renewal. In the end, there were 40+ new nests and trees full of heron chatter. 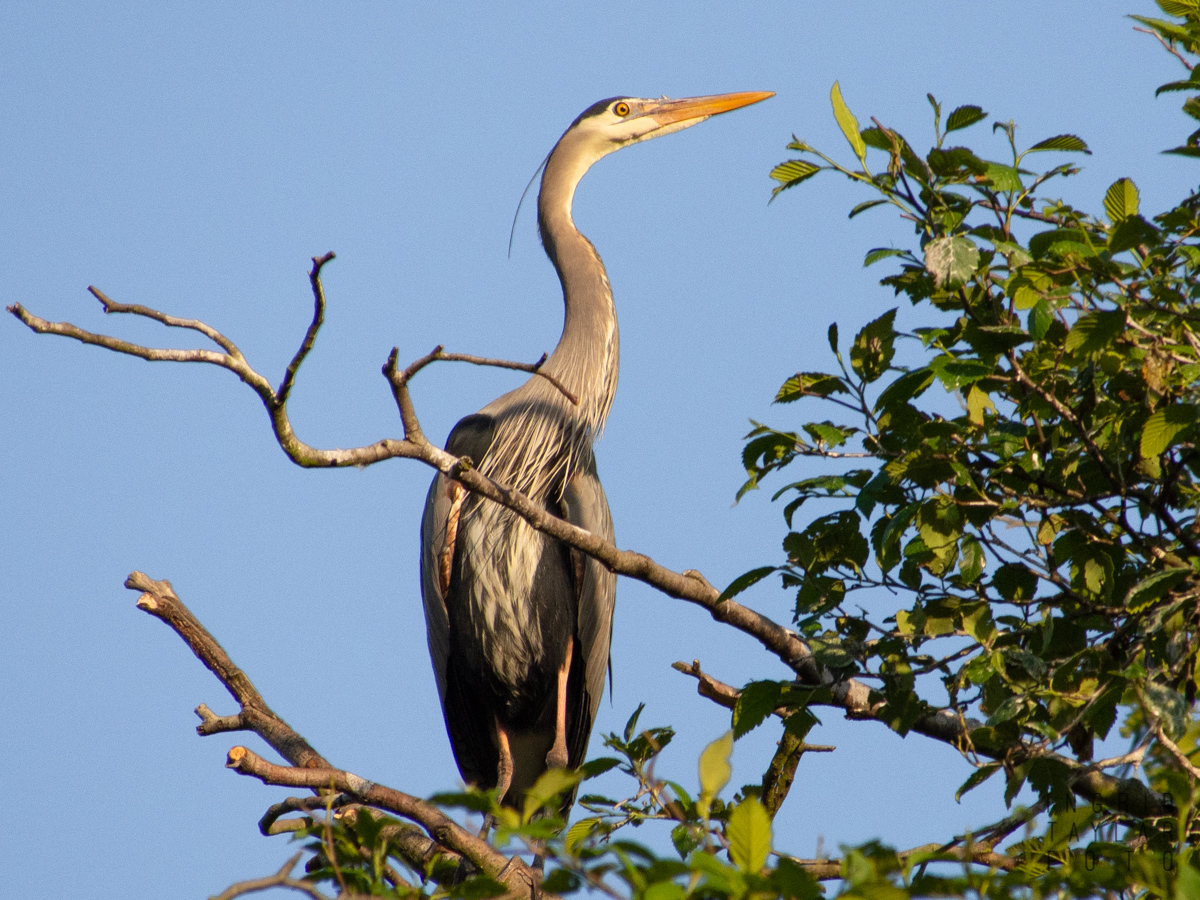 Some people will argue that animals can move forward in their lives after trauma because they don’t share our emotional complexity. I refuse to simplify their experience, even though we can never be sure what their psychological response is to stress. I ran into a gentleman who lives next to another small nesting area north of Seattle. He said there was an eagle incident at that site a few years prior, and his words to me were, “I never want to witness something like that again. The distress of the birds was difficult to bear.” The undeniable fact is that in the wild, there’s an imperative of immediacy: you move on because you have no choice.

Whatever their motivations and emotions might be, it’s often something as simple as a heron with a branch that reminds me to be resilient. I think the same thing when I see a gull or a pigeon foraging for supper with just one leg, the other leg either missing or limp. In those moments, although I’m reticent to compare, I do think they are better than I am … for the tenacity with which they endure and overcome life’s travails without much complaint or wavering. I’ve resolved at this point in my life, that they are clearly my teachers. It is definitely not the other way around.

All images photographed with the Olympus OM-D E-M5 + Lumix 100-300mm (micro four thirds). My Olympus E-3 workhorse is in the shop until I don’t know when.

EDITED TO ADD a few Great Blue Heron nesting images from the 2014 nesting season at the Ballard Locks and Commodore Park: 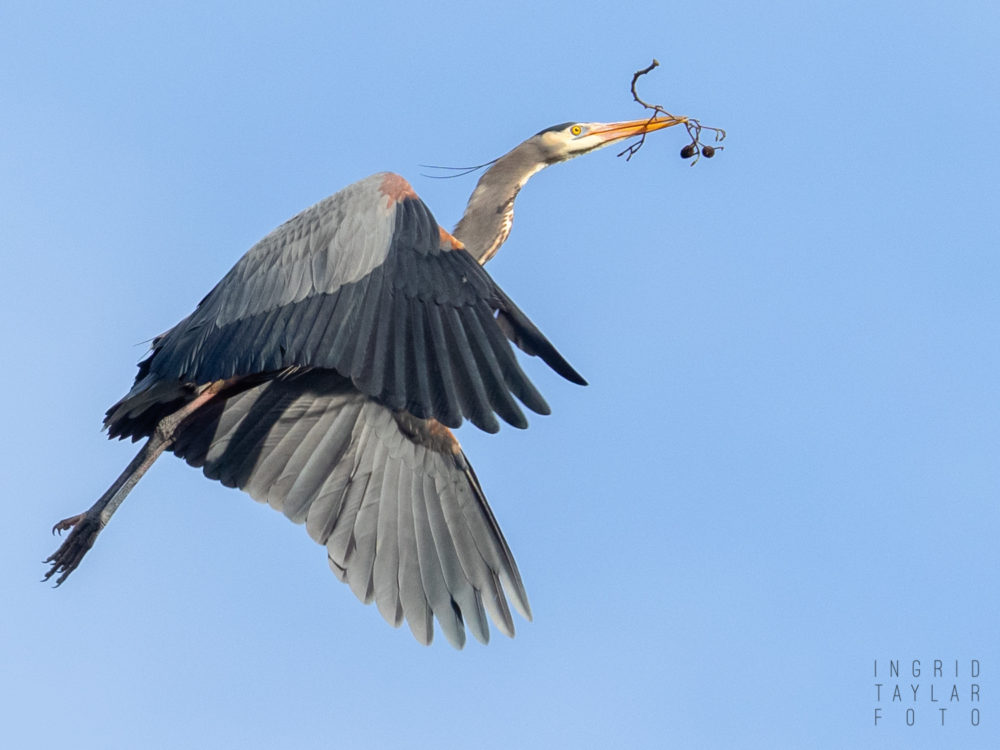 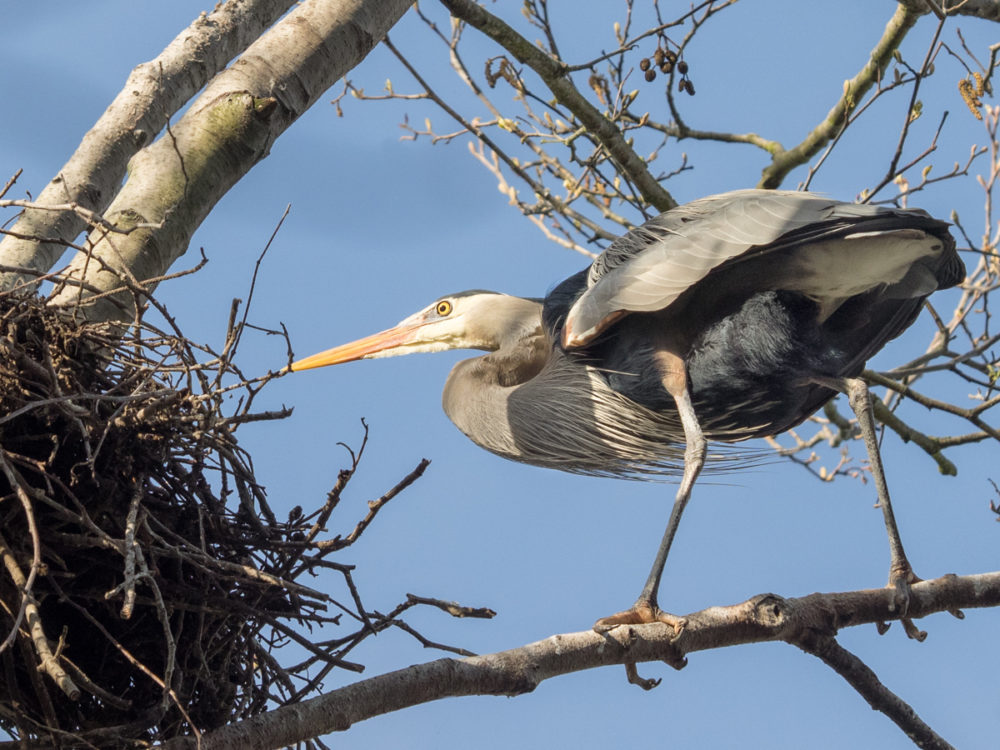 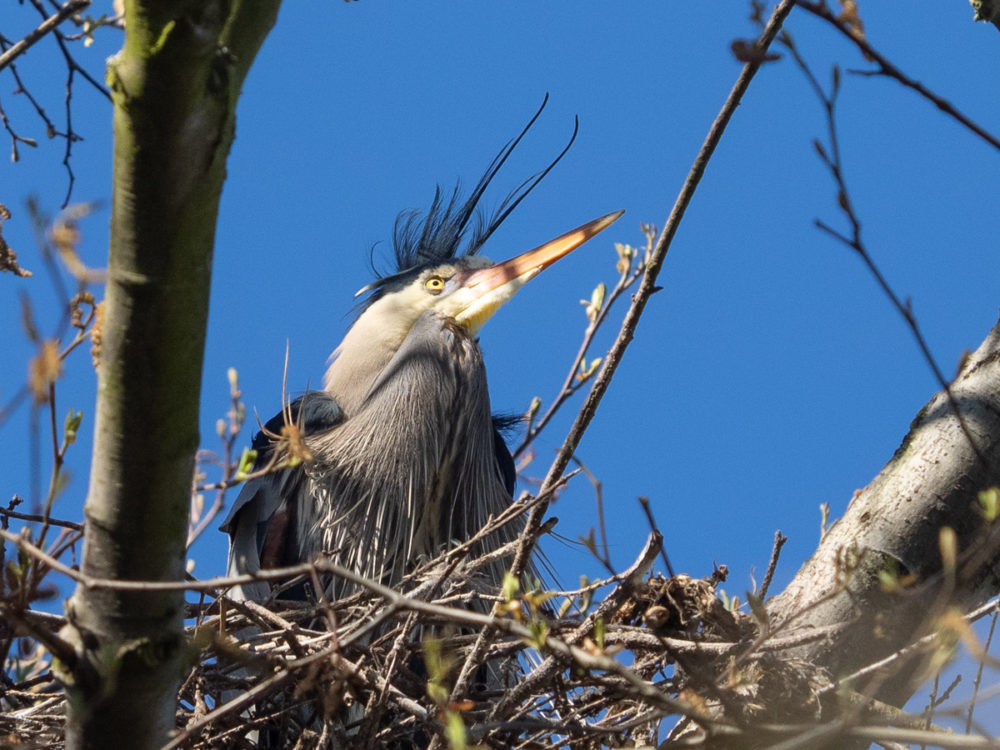 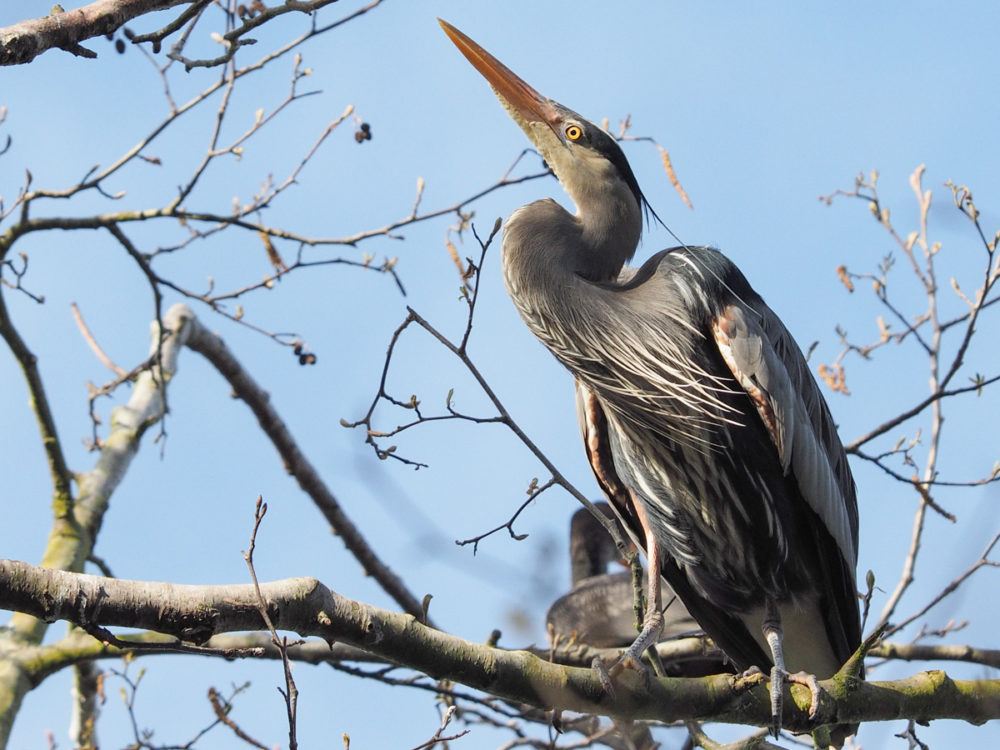 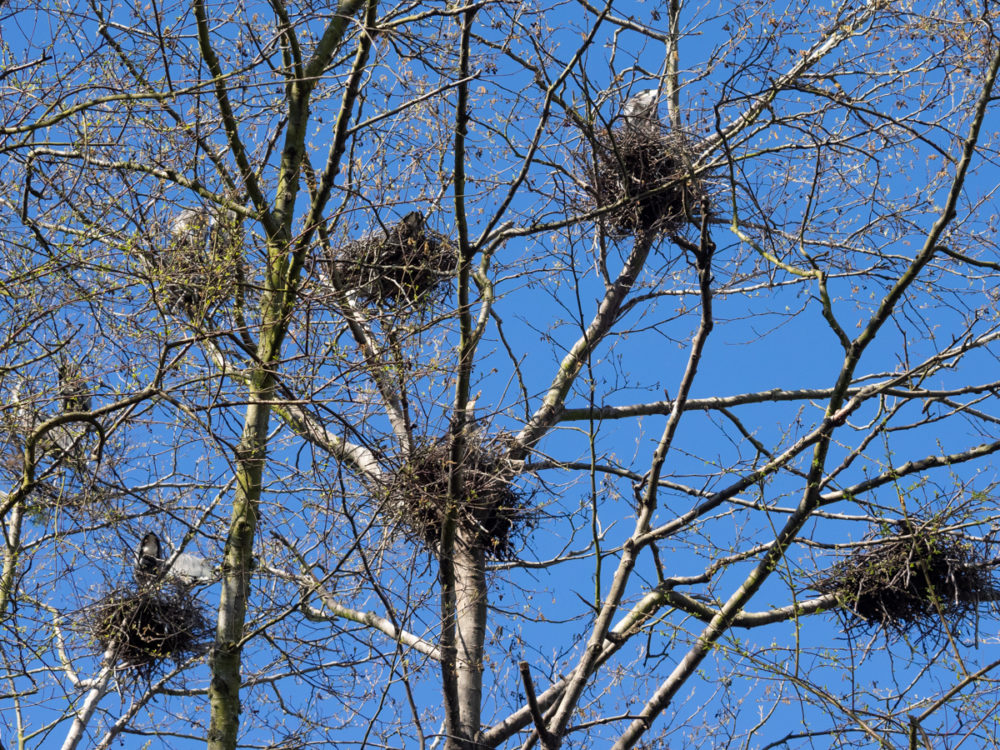