We barely saw this sub-adult Bald Eagle (Haliaeetus leucocephalus), hunkered down and camouflaged, in a tree above the trail at Union Bay Natural Area. I shot a few frames right before the sun fell below Husky Stadium to the south. At full extension, the eagle was still quite small in the frame, and the aggressive cropping shows the limitations of my lens. Still, it was another one of my favorite periphery surprises, where I note an anomaly in a tree, and it turns out to be something fantastic like an eagle. 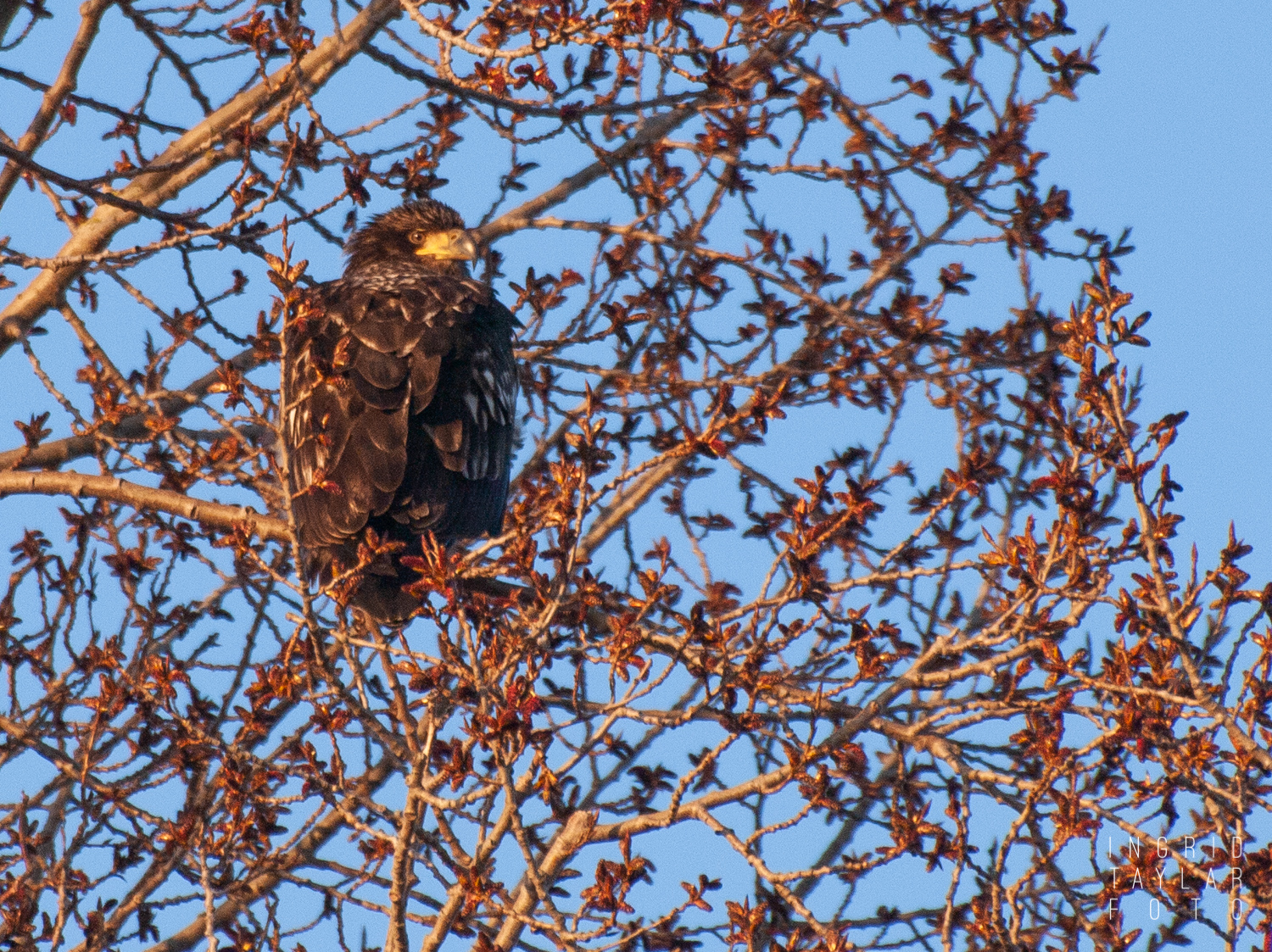 Union Bay is the same location where I shot the Bald-Eagle-crow interaction last year. It’s a reclaimed landfill, in continuous restoration, and it hosts a variety of wild birds throughout the year. This spot, along with several other I frequent around Seattle, is testament to the power of patchwork restoration. I call it “Field of Dreams” landscaping because, it’s true: if you build it, they will come. A success in restoration ecology, these 74 acres boast sightings of more than 200 bird species. 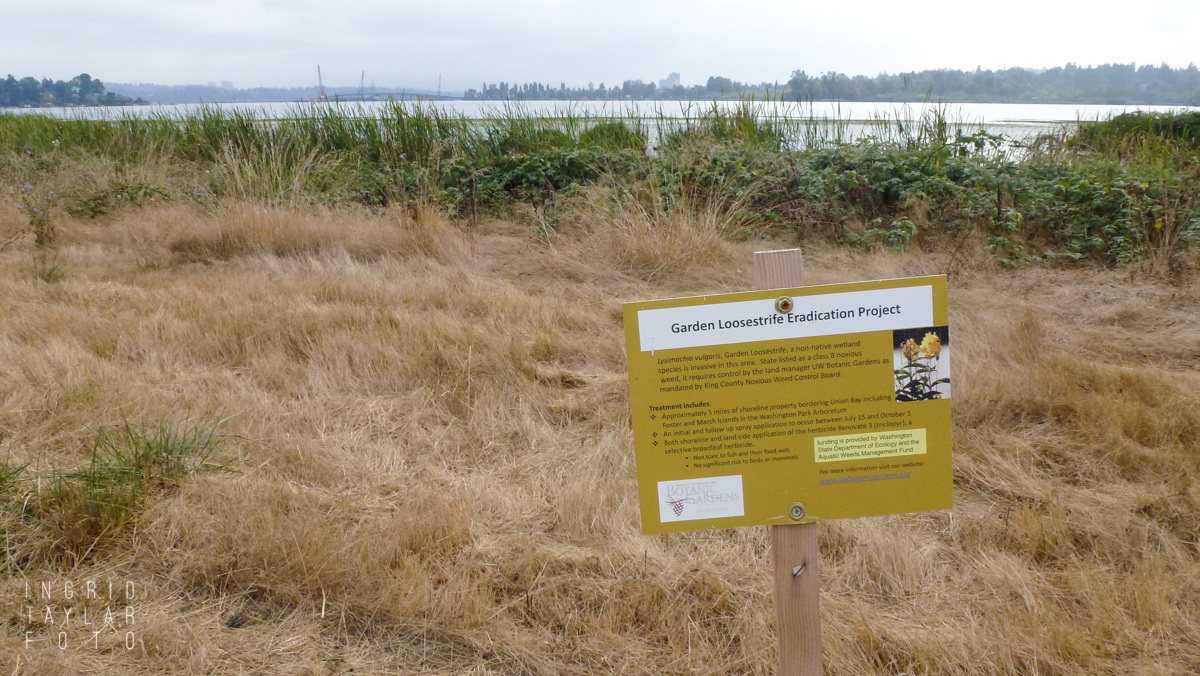 Compared to some of the wetland trails I roam around the Bay Area, Union Bay is actually small. But it’s nowhere near the smallness of a parcel Hugh and I worked on, not that long ago on San Francisco Bay. As part of a Golden Gate Audubon project, we helped with the Pier 94 habitat restoration project, cleaning up old tires and rubbish, and planting native foliage around this five-acre parcel. The transformation from industrial site to viable wildlife habitat was inspiring. The last time we were there, we counted at least 30 species of shorebirds, ducks and gulls, using the shoreline area to forage. The nearby Heron’s Head Park, at 25 acres, is yet another restored wetland, forming a chain of wildlife habitat and green space around San Francisco Bay. It’s that linkage — individual components creating larger wildlife corridors — that Caroline Fraser discusses in her book Rewilding the World:

“Rewilding is about making connections. Forging literal connections through corridors. Creating linkages across landscapes and responsible economic relationships between protected areas and people. Forging links between ourselves and the intact ecosystems we need to survive. These connections are not optional: we cannot live without them. Aside from moral or aesthetic considerations, biodiversity is compulsory.” 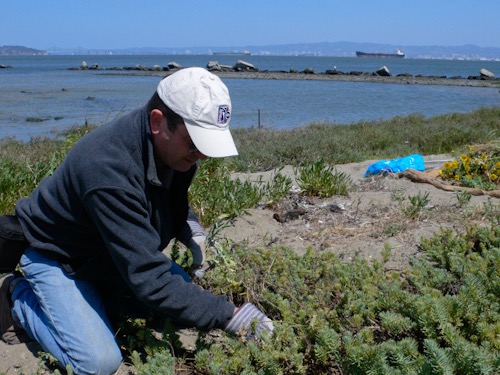 Volunteering at Pier 94 in San Francisco 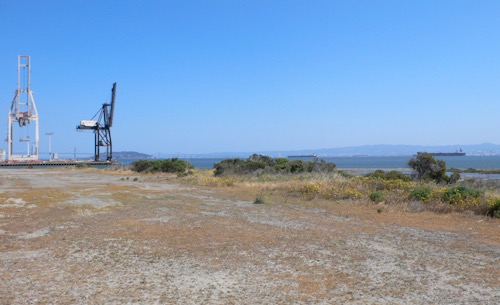 In the Pacific Northwest, the same parcel-by-parcel efforts are happening on the waterways and mountain greenways. At the center of these shoreline restoration projects is the declining and endangered salmon population. The complexity of restoring Puget Sound for salmon, for Orcas, for other wildlife, and for humans cannot be overstated. From the toxics cleanup on the Duwamish River to PCBs in Orca habitat, the efforts to restore are large-scale and long-term — as in decades-long. Fraser calls it “one of the most massive sustained ecological restoration projects in history.” The Puget Sound Partnership was formed in 2007 to map out the future of this endeavor.

Seattle doesn’t have the same elements the Bay Area does — the public shorelines and salt ponds and abandoned waterfront military installations — which allow for some of the more visible public restoration projects we see around the Bay. When I first moved to Seattle, I was distressed by this contrast in acreage. As I’ve become more educated on the ecology of the Northwest, however, I’ve come to appreciate the splendor of smallness — smallness, interconnected.

As one example, in our first Seattle neighborhood, we had access to a private beach park. The park covers about 15 acres of shoreline, wetlands, and forest. I photographed there for a year– herons, eagles, migrating ducks and river otters — and got to know the people who turned this land from a play park into thriving salmon habitat. The park, in its current state, is the culmination of twenty years of rolled up sleeves, intense study, engineering aptitude, and biological trial and error. This year, the park counted among its successes the return of more than 200 spawning salmon. It’s a transformation I’m now privileged to be recording with my camera for the local park association.

Salmon are also the reason the city of Seattle recently bought up a few lakefront homes — to aid in creek and waterfront restoration. When I look at the bulkheads and wildlife-unfriendly gardens around these areas of Lake Washington, I’m struck by the anthropocentric ethic that still prevails when issues of private property development come into play. Although I wish it were the norm that landowners landscaped in wildlife-friendly ways, I realize that attracting wildlife is the last outcome some urban or suburban dwellers want (although I could make a strong case for shorebirds). Add to that bureaucratic hurdles and paperwork, and restoration can take on dimensions that seem immense, even for small pieces of property.

I still hope for an emerging worldview that takes land-use needs (other than our own) into consideration. Sub-adult Bald Eagles deserve their sanctuaries as much as we do. In the last chapter of Rewilding the World, Fraser addresses our human-centric views and quotes Henry Beston, saying:

Perhaps most important, we need to reevaluate our place in the world. Home sapiens is not the only species that matters. The naturalist Henry Beston put it eloquently: “We need another and a wiser and perhaps a more mystical concept of animals …. We patronize them for their incompleteness, for their tragic fate of having taken form so far below ourselves. And therein we err, and greatly err. For the animal shall not be measured by man. In a world older and more complete than ours they move finished and complete, gifted with extensions of the senses we have lost or never attained, living by voices we shall never hear. They are not brethren, the are not underlings; they are other nations, caught with ourselves in the net of life and time, fellow prisoners of the splendor and travail of the earth.”

After posting this piece, I came upon an interesting article in Yale Environment 360 challenging the current conservation paradigm of non-native species eradication. In this blog post, my focus is on areas that would not have been otherwise viable as wildlife habitat. There are other issues involved when altering a wildlife landscape by removing invasives and changing the ecology with native plantings. And, in previous posts, I’ve talked about the sometimes misguided demonization of certain non-native animal species. The Bay Area blog Death of a Million Trees addresses the controversy of removing trees in the interest of nativist ideals. There are some great posts and comments there on this subject.