Our apartment sits above Interbay in Seattle — what used to be a thriving salt marsh and tidal flat, replete with shellfish, marine life and waterfowl. It was a foraging ground for Native Americans of the Shilshole tribe, who made their home in present-day Ballard, just north of Interbay.

At the turn of the century, the area’s marshlands were filled with garbage and with soil from Seattle’s regrade operations — a sadly common affair throughout our history. This destroyed the ecology of the marsh and turned Interbay into a land bridge. It’s an industrial hub and a rail conduit that connects Smith Cove and Elliott Bay in the south with Salmon Bay in the north.

To quote Joni Mitchell, they did, indeed, pave paradise and put up a parking lot … and a rail yard and cement bunkers for buildings. But despite the marsh’s tragic ecological history, wild animals still find viable niches in this ashen landscape. Some are human aided. For instance, at the southern terminus of Interbay, there is an Osprey nest on a platform provided by the Port of Seattle. There’s another Osprey nest on a towering light stand, smack-dab in the middle of Balmer Yard, the train depot. A colony of Caspian Terns has been trying for at least two years to nest on an Interbay warehouse rooftop (more on that in another post). Seals, sea lions, and river otters regularly meander into Smith Cove, twisting into racing turns as they butt up against the bulkheads.

Interbay is also on the local Bald Eagle flight path from Discovery Park. And … where there are eagles and other raptors, there is also a long entourage of gulls, terns and crows. In fact, I know precisely when the eagles are passing through by the cacophony of bird cries throughout the canyon. This is a regular, distant scene from our balcony: 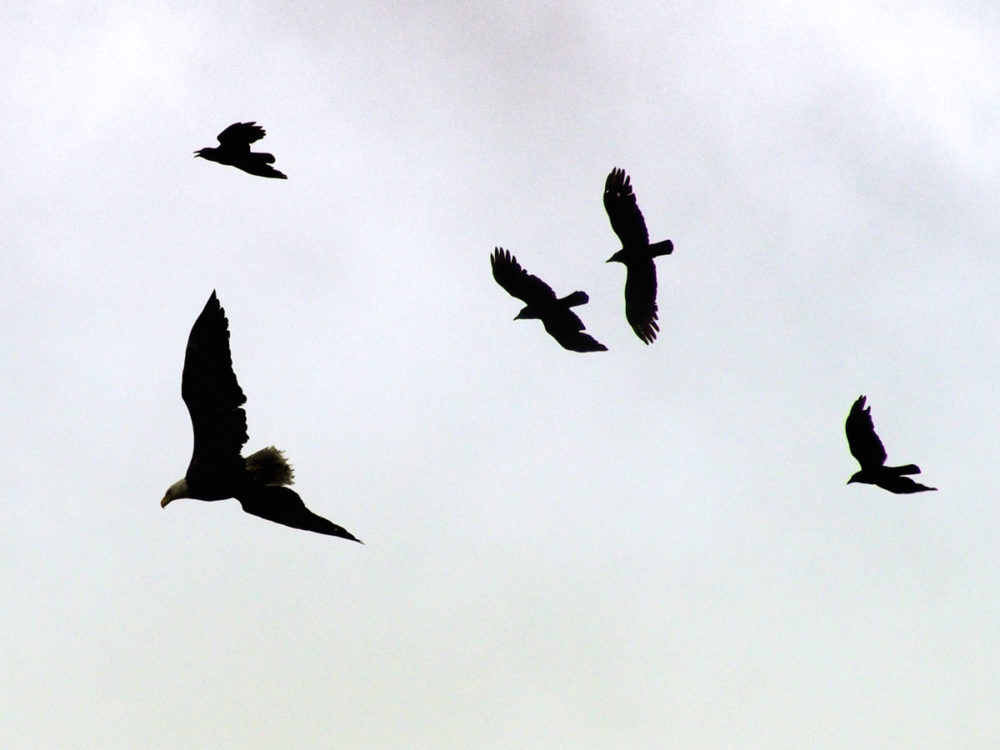 The mobbing behavior of corvids and blackbirds fascinates me. I recently posted a photo similar to the one above on Facebook, and at least one person marveled that a raptor as large as a Bald Eagle would be fazed by a crow mob. But, there are times I see 30 crows, a handful of gulls and sometimes a few terns taking a stab at the flying eagle, and in those numbers — even in numbers much smaller — eagles seem to understand the repercussions. In John Marzluff’s book, In the Company of Crows and Ravens, he describes mobbing effects this way:

“Dive-bombing potentially dangerous predators at first blush seems foolish, but it has a variety of benefits. Hawks, owls, eagles, raccoons, cats, foxes, coyotes, and even people are often the subjects of mob aggression by hysterical crows. To crows these are all predators, having at one time or another been caught by a crow in the act of preying on nestlings or older family members. While calling loudly, members of the mob orchestrate strafing runs at the potential predator, often striking it. Blows so delivered can cut people, knock small predators from their perches, and may even kill some predators.”

I’ve also seen enough Bald Eagles with birds in the talons, to understand why a crow’s vehemence would be unchecked when one of these predators swoops into view. I’ve commented previously that in my many observations of crows as sentries, they are always the first to note an overhead predator, warning other birds like my favorite winter pond Wigeon. And, crows are the last to leave the tail of the intruder as they push him or her out of their air space.

My favorite part of this interaction is what I call the crow “victory lap” at the end of a chase. The crows who leaped off their roost to chase the eagle, now return to the roost in waves, circling, calling to each other, and eventually re-congregating as the culture they are, on the limbs where they’ll have a perfect view for the next flight of the eagle.

These are but a few of the crow mobbing photos I’ve taken in the general vicinity of my home. And below that, a tribute to Joni Mitchell and the above referenced paved paradise. 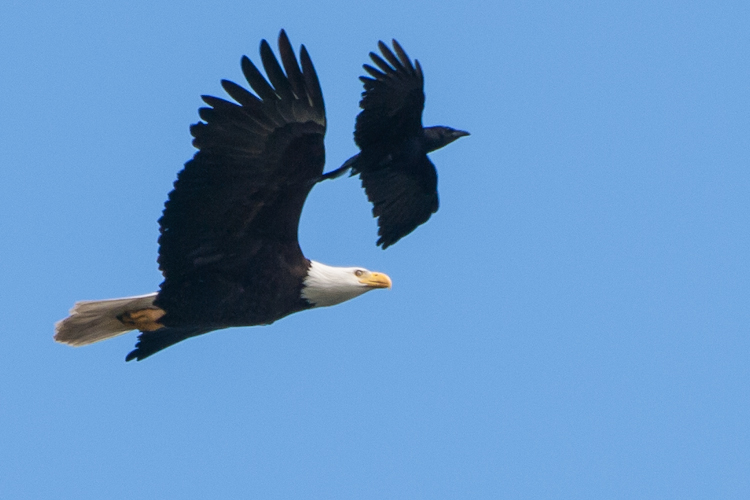 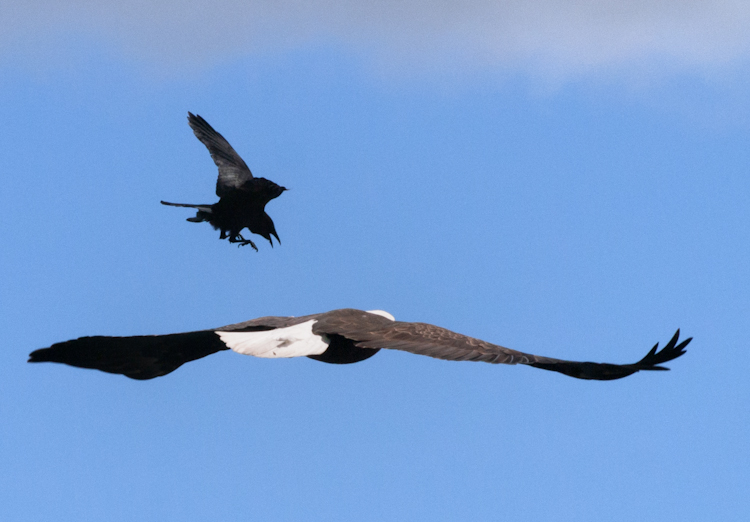 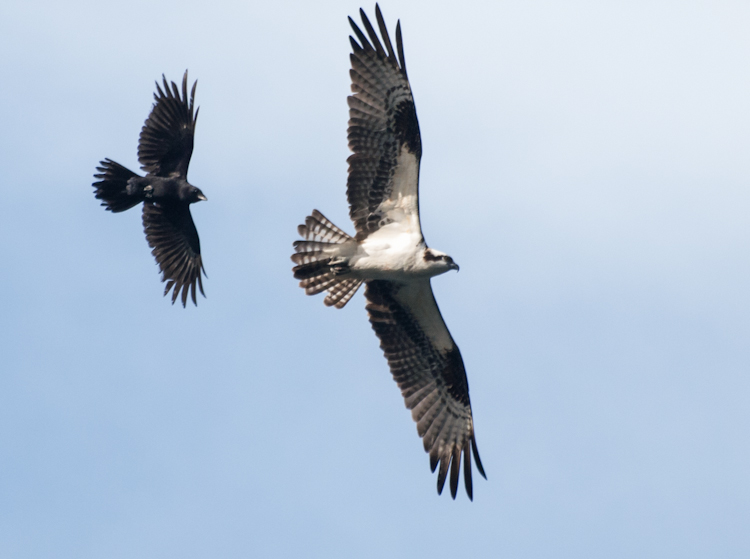 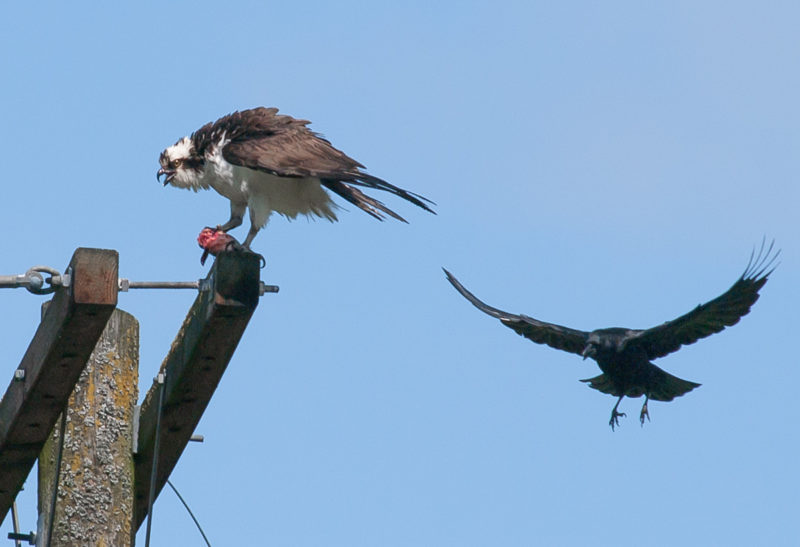