Patagial/Wing Tags on White Pelicans and Other Birds 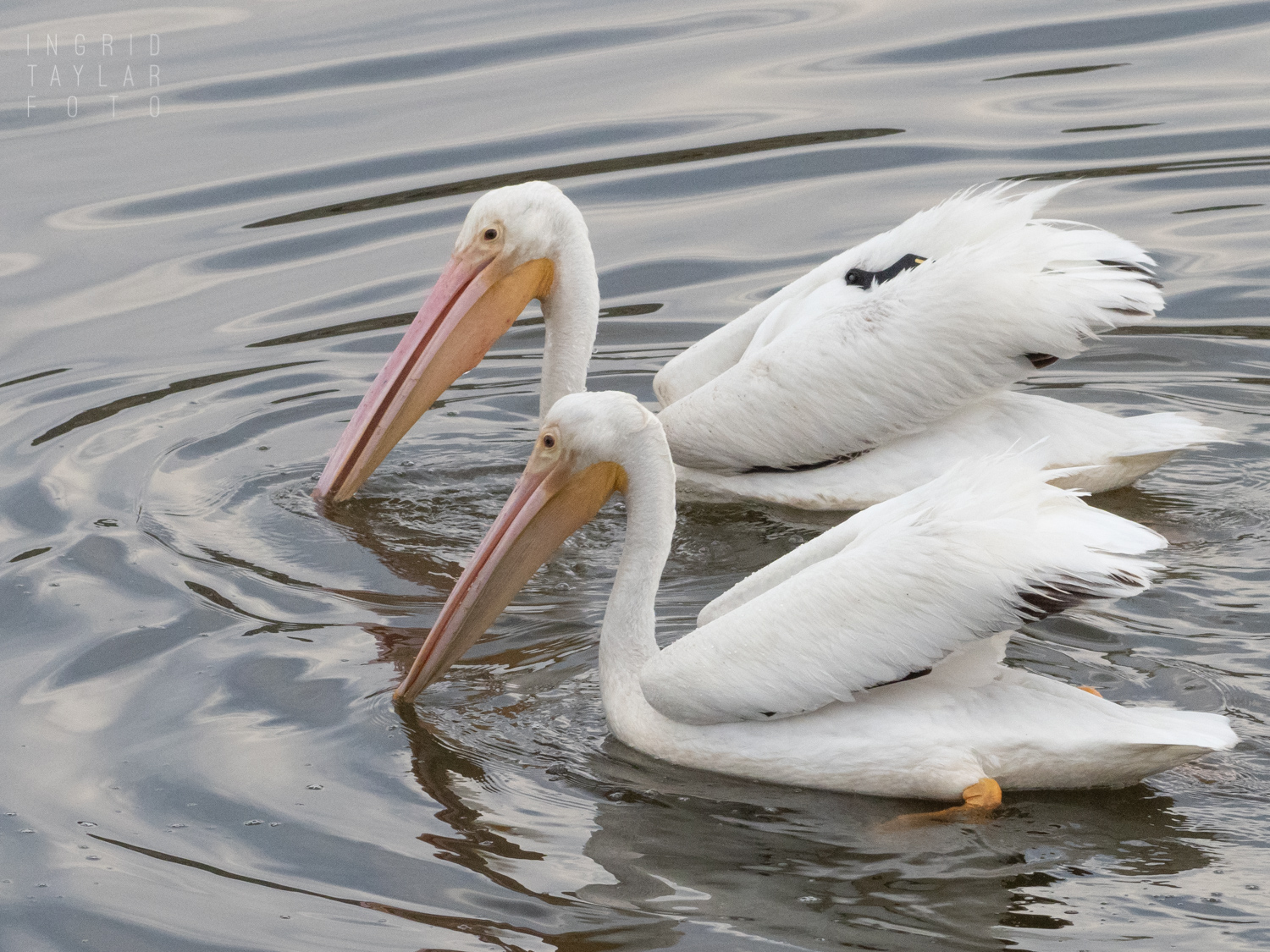 American White Pelican 02J, photographed from above, looking into the East Garden Grove Wintersburg Channel at Bolsa Chica. Normally, I like to get more of an eye level view if I can, but in this situation, I was just trying to read the number on the pelican’s patagial tags.

I’ve written a few times about how much I appreciate learning more of a bird’s story through his or her banding history. Sometimes, as in the case of a banded American Avocet I came upon at Palo Alto Badlands, the information is (for me) astounding: her older age was unusual enough that the banding agency required extra follow up for validation. In those cases, I’m overcome with respect and gratitude — respect for what it took this little bird to survive for 12+ years in our hazardous world, and gratitude for a life in which we get to share this planet with these marvels of existence and flight. 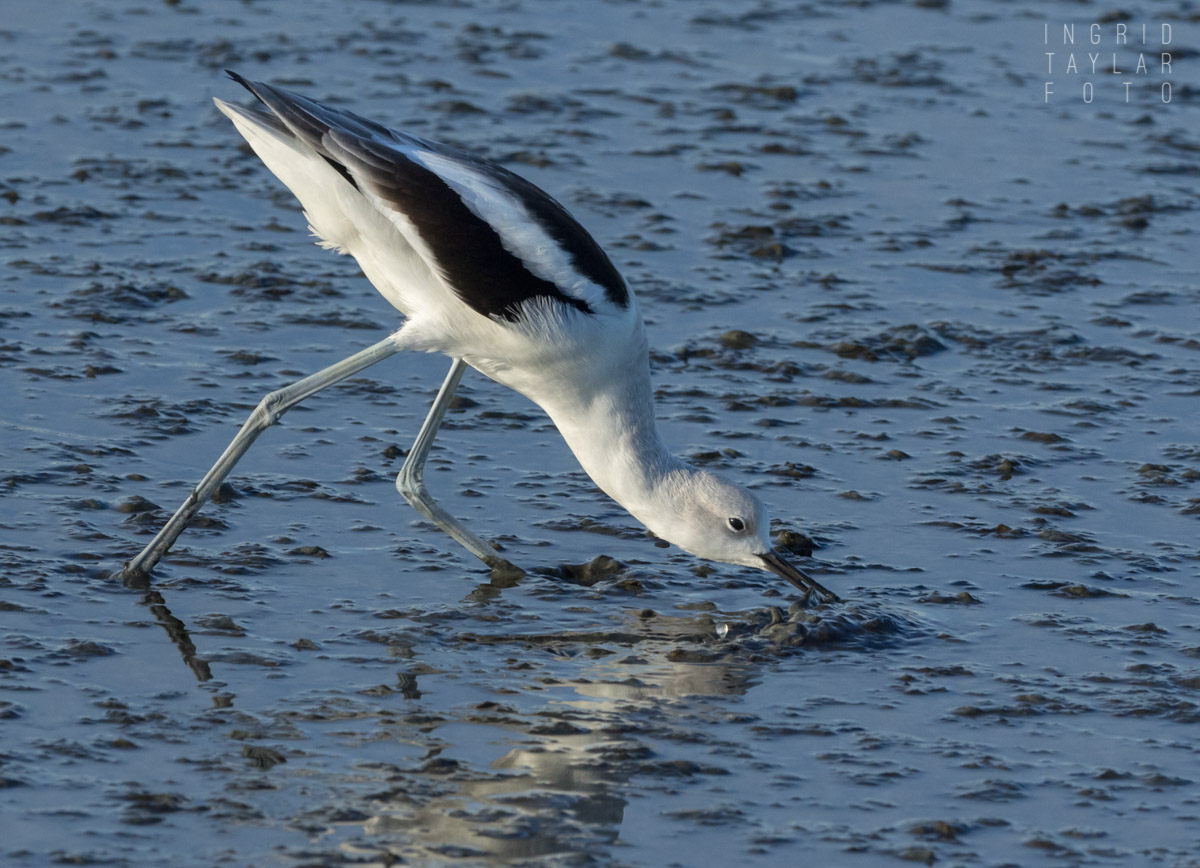 In other cases, I’m conflicted, when the tagging devices seem cumbersome … or, when they are so large as to completely mar the appearance of that animal. I wrote about those misgivings years ago after coming upon a Red-tailed Hawk with a vivid patagial tag.

I recently photographed a tagged female coyote in San Francisco, wearing a thick collar along with a large, bright ear tag. After chatting with a coyote researcher, my mixed feelings were somewhat substantiated when I learned that some of the best information on San Francisco’s resident coyotes came more from dedicated observation and documentation of the local population, than from tracking devices. 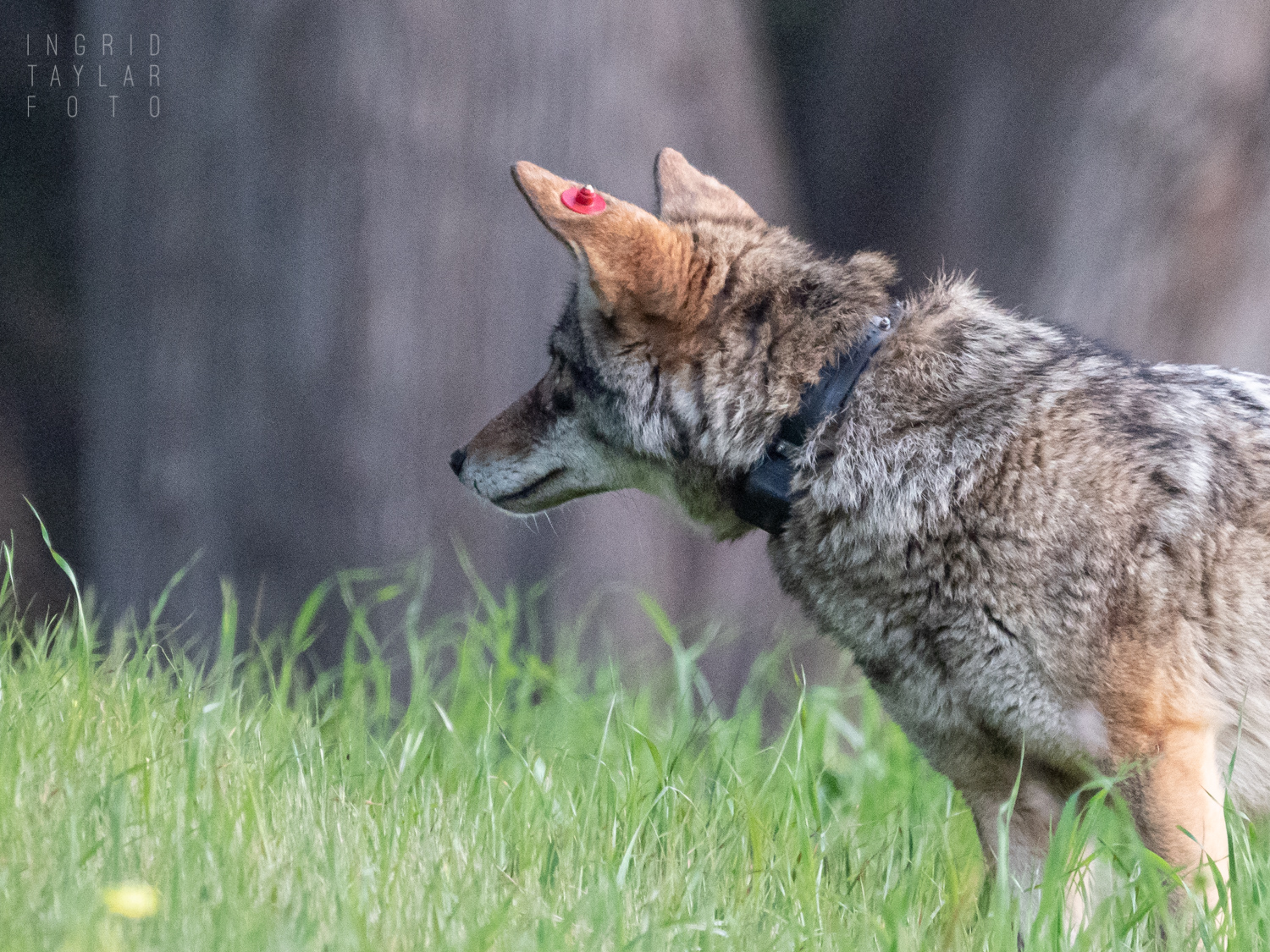 I’m speaking, however, as a photographer and wildlife advocate, not as a scientist. My visceral reaction is precisely that. Plain and simple, it’s difficult to see wild animals wearing these devices and tags when they are so significant and glaring, even understanding there are scientific benefits in many cases. It’s when I learn about cases where information might have been acquired through less invasive means, that it’s hard to reconcile the huge, human brands some animals wear for life.

There are some studies you can find online, pointing to the issues some birds face, bearing these tags, as with African Cape Vultures whose movements seemed impaired by patagial markers. The study does reference incorrectly placed markers:

Individuals equipped with patagial tags covered a  much smaller area in comparison to the leg band group. They were less likely to take flight and, when doing so, flew at lower ground speed compared to individuals wearing leg bands.

“Although we did not measure the effects of patagial tags on body condition or survival, our results strongly suggest that patagial tags have severe adverse effects on vultures’ flight performance,” says first author Teja Curk, a PhD student at the Max Planck Institute of Animal Behavior.

One Australian study compared the reduced return rate to breeding areas from wing-tagged versus leg-banded cockatoos. There’s been at least some scientific exploration on whether or not highly visible tags affect a bird’s safely level from predation.

All of that is a long introduction to American White Pelican 02J who I spotted at Bolsa Chica Ecological Reserve, bearing two patagial tags. I felt, again, those mixed feelings in seeing two large, bold, black wing markers on this gorgeous white bird. The young pelican was foraging and behaving normally in the moments I observed him fishing with another white pelican. White pelican 027 is a first-year pelican, banded last year in 2021 before he could fly.

I’m not sure if this particular pelican is connected to the white pelican-fish depredation studies in Idaho. This is the official document with the full scale of Idaho’s 10-year, white pelican plan.

The overall goal of this plan is to maintain viable breeding populations of pelicans in Idaho while reducing impacts to native fish and recreational fisheries. Emphasis is on reducing predation rates in fisheries in southern Idaho through a combination of management actions that include hazing of foraging birds, manipulation of nesting habitat, and/or directly limiting pelican production and recruitment.

When you photograph leg-banded birds, it can be a trial to get enough angles on the federal leg band to see the entire number, especially on older and worn tags. So, the visual advantage of seeing and reporting these wing-tagged birds is undeniable. Even with the patagial markers, it took some time before the pelican was in a position to reveal the entire tag number. In the photos, you can see the partial viewing I had until that big reveal.

Wishing 02J a beautiful, long, healthful, and safe life, flying and fishing free with his or her pelican mates. 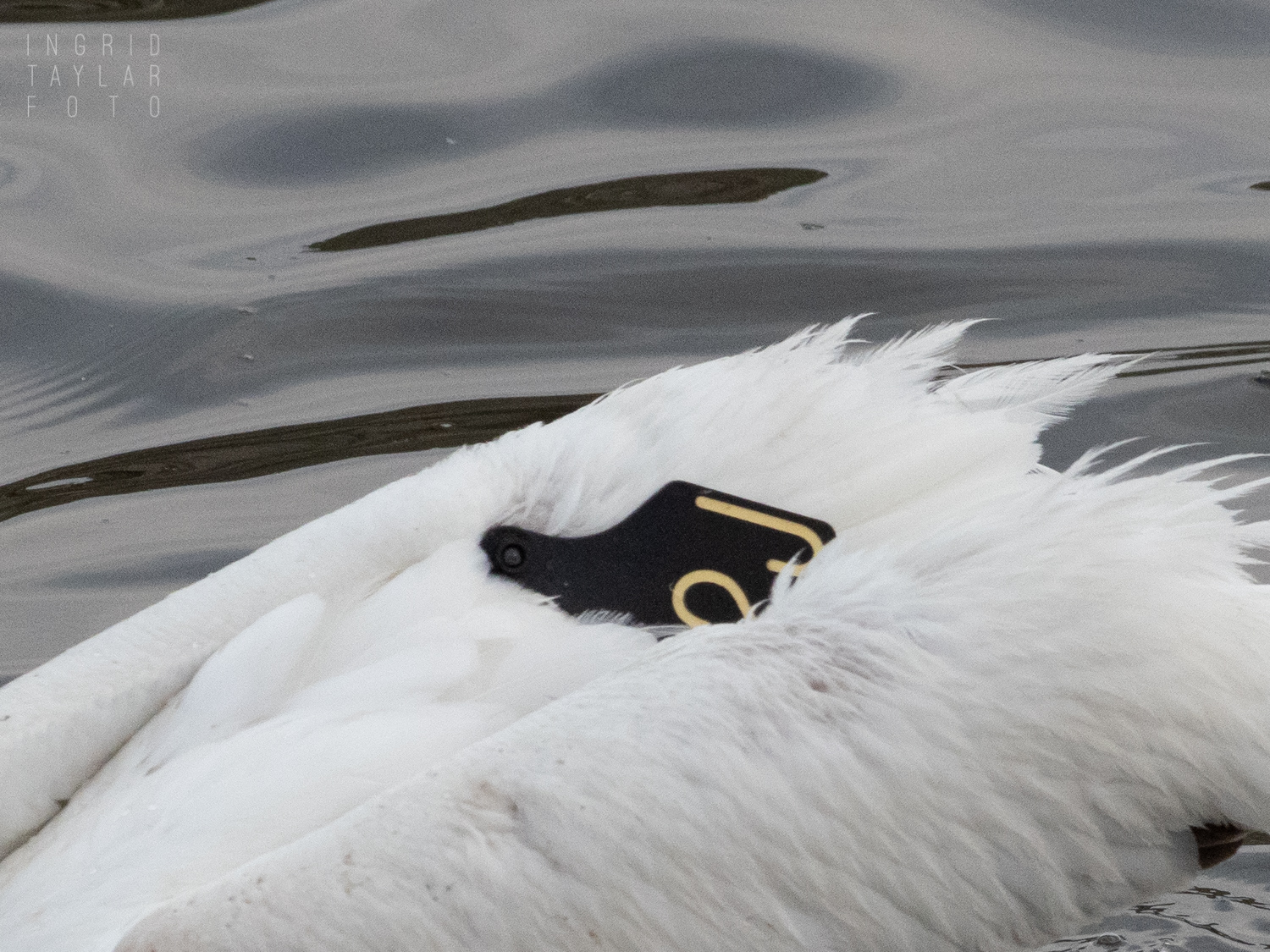 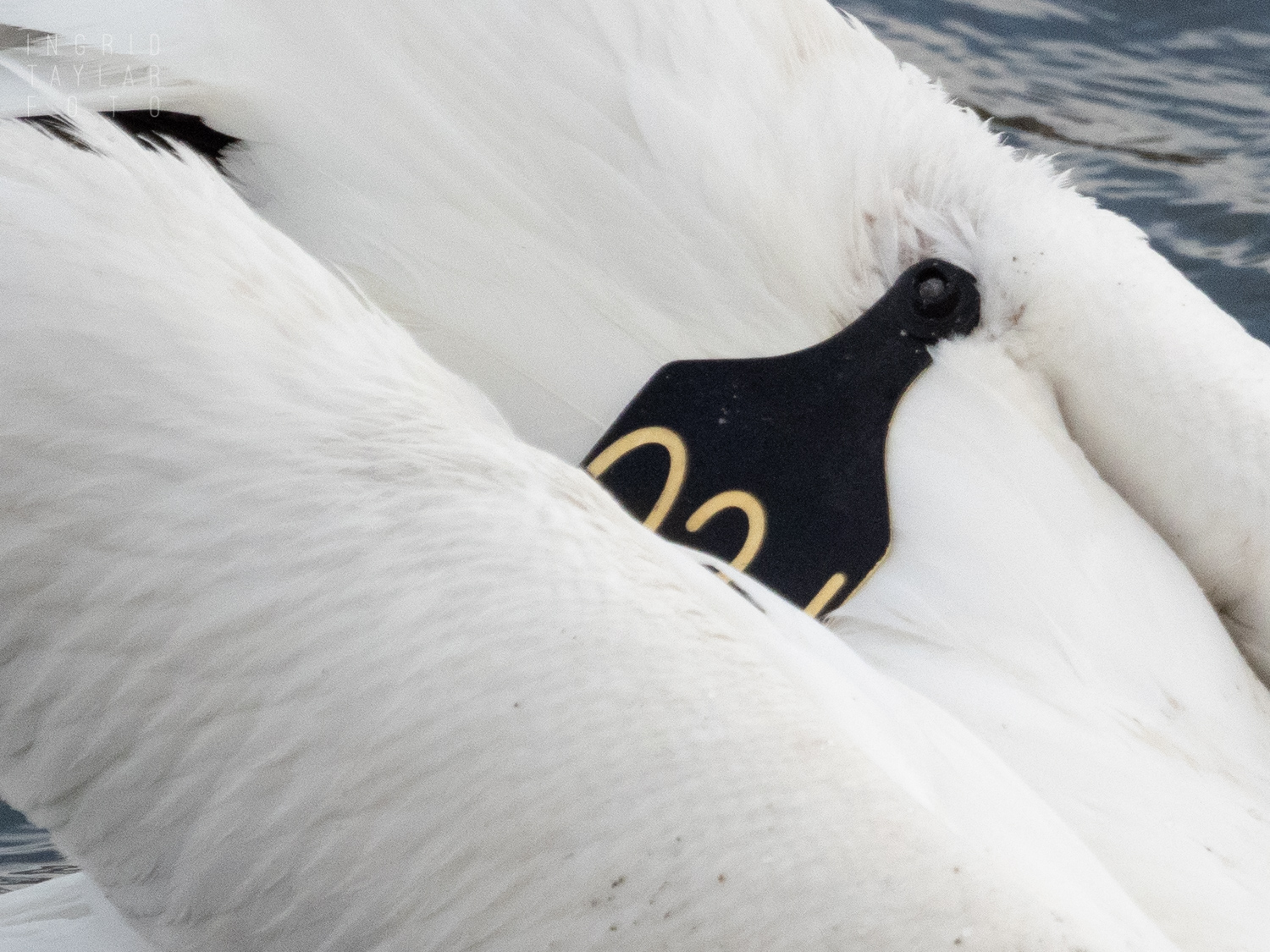 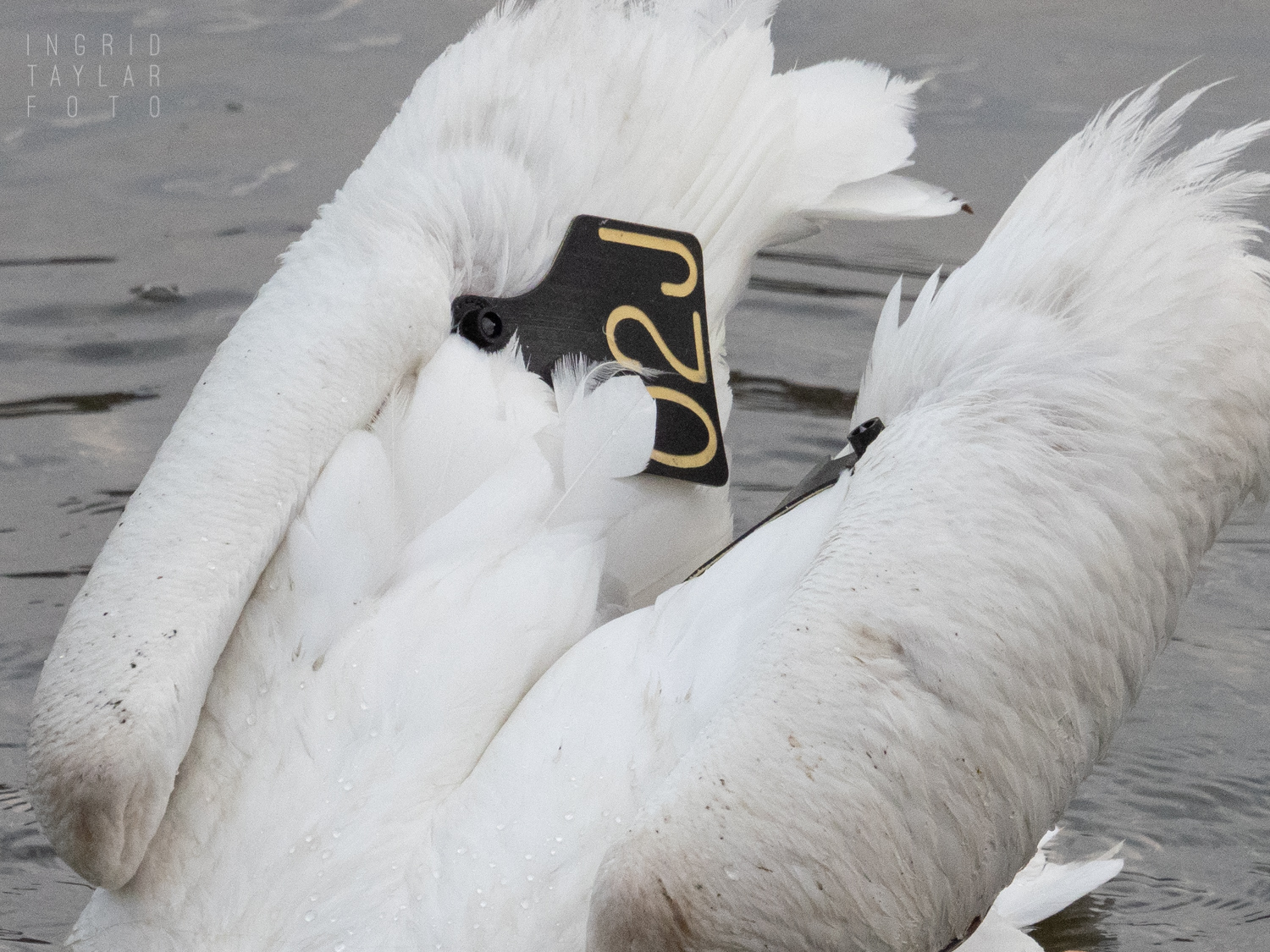 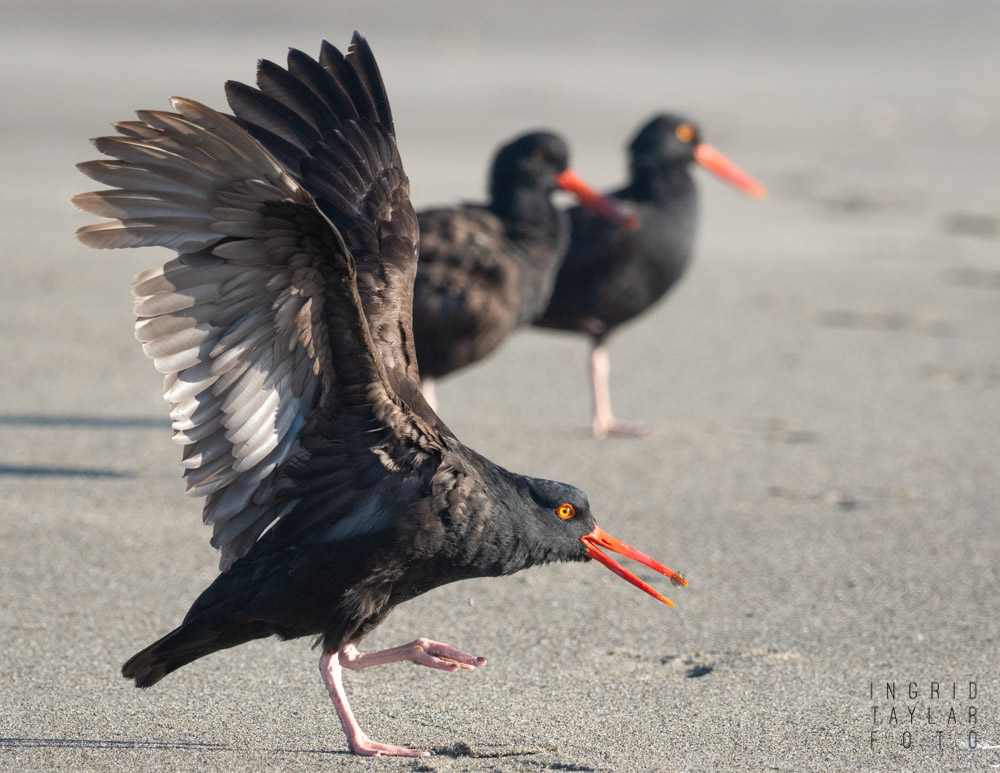 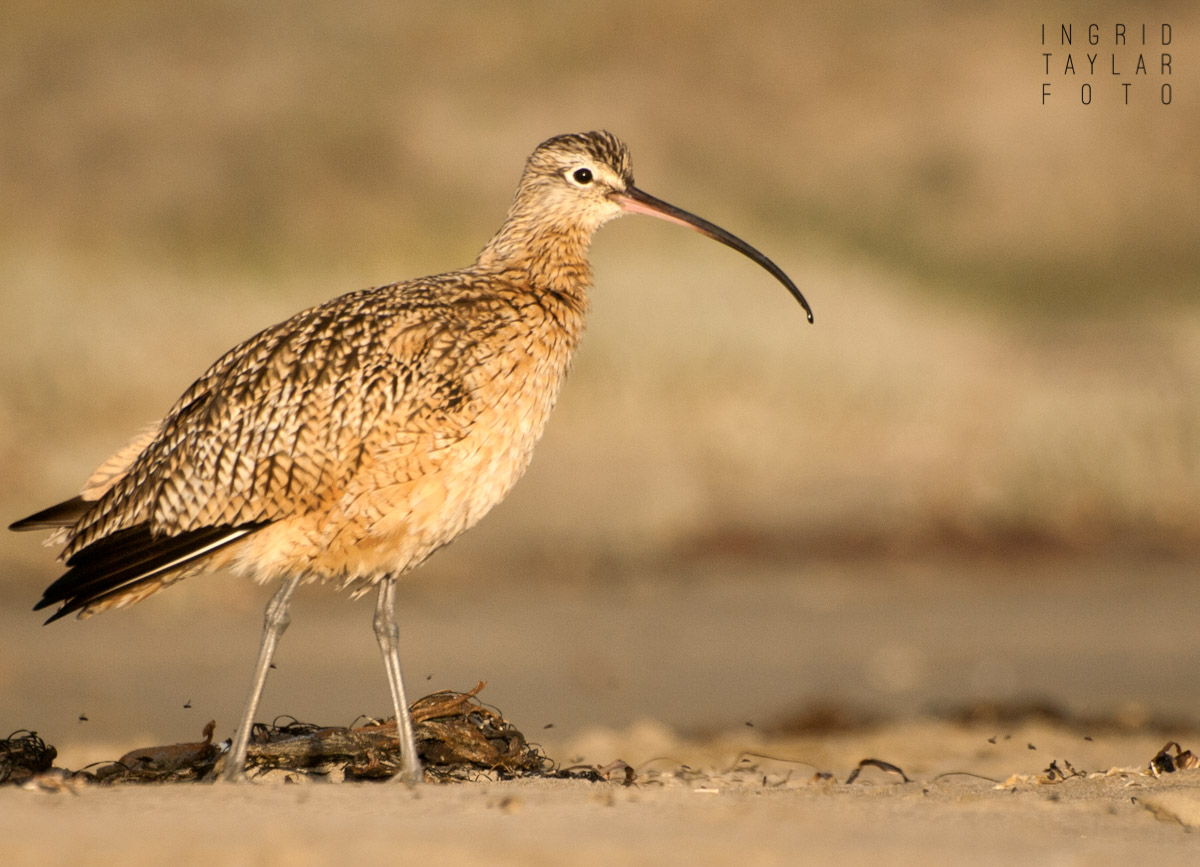 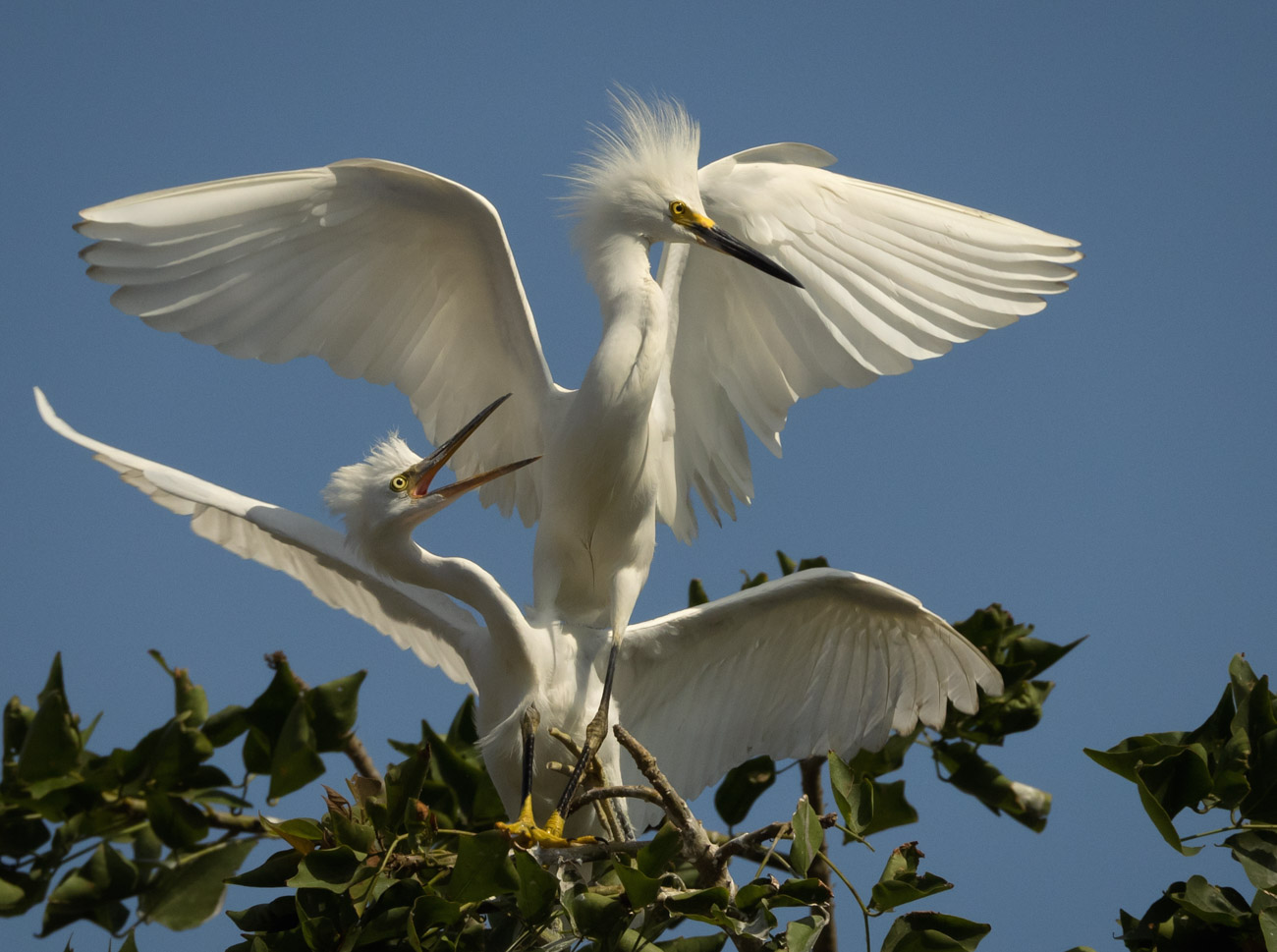 Up On the Roof

Sunday in the Park With Pelicans