Part 2: The No Hunting Stamp

Later, in Part 3 I discuss how birders, photographers and wildlife watchers can capitalize on their economic power.

Here in Part 2,  I interview photographer Marlin Greene on his concept of the refuge stamp and what “refuge” means to him. 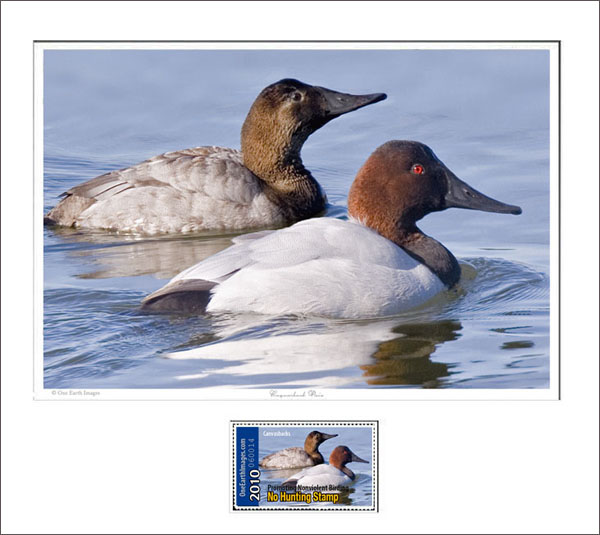 Q&A With Marlin Greene – Designer of the Stamp

Photographer Marlin Greene of One Earth Images created his first No Hunting Stamp in the fall of 2006 after being barred from one of his favorite trails. As he explains below, a sign on the trail said simply, “closed for maintenance.” After inquiring at the visitor center he was informed that this portion of the reserve was closed to all but duck hunters during waterfowl hunting season.

Since that time, he’s produced a No Hunting Stamp every year to raise awareness about the waterfowl hunting that takes place on National Wildlife Refuges. Through an online exchange, I asked Marlin about his original inspiration for the stamp and about his perspectives on refuge funding, refuge hunting and the future of refuge land-use priorities.

Part 2: The No Hunting Stamp

What was your original impetus in creating the No-Hunting Stamp? Was it a single incident or a succession of realizations?

“A succession of things and one thing in particular. I’m relatively new to ‘birding’ and photographing birds. I seriously started photographing birds about four years ago. One of the first places I went regularly was the National Wildlife Refuge at Nisqually, Washington. To my surprise, one day in the fall of 2006 I believe, I was barred from one of my favorite trails; a sign said simply, “closed for maintenance.” Upon inquiring at the visitor center I was informed that the back side of the reserve was closed to all but duck hunters as it was then waterfowl hunting season. I left perplexed and somewhat disturbed about how people could be killing ducks on a wildlife reserve. I began to do a little research and found that most of the National Wildlife Reserves not only allow hunting but encourage and assist in the ‘harvesting’ of wildlife. This was a sad but true revelation.

I discovered that the Fish & Wildlife folks who manage the reserves are funded in great part by hunting interests and from the sales of hunting licenses and stamps. It also became obvious that hunting was being underwritten unknowingly by attendance fees at National Wildlife Refuges (NWRs) and by Duck Stamps purchased by non-hunters. The income from hunting interest combined with non-hunters’ contributions was enabling the reserves to function as hunting clubs, to the exclusion of the general public, for several months of the year. This is happening despite the stated mission of all National Wildlife Reserves: ‘To administer a national network of lands and waters for the conservation, preservation and management, and where appropriate, restoration of the fish, wildlife, and plant resources.’

I wanted to do something to call this situation to the attention of people who, like myself, were unaware of the hunting going on at the National Wildlife Refuge. I also realize that an alternative way to fund the reserves is needed, one that allows non-hunters and people with no sympathy for killing wildlife to contribute to the system and have their contribution measured and considered when policy is being determined. The idea of a NO HUNTING STAMP was appealing, so I decide to design and print one in the hope that it might start some movement toward restoring the reserves as havens for wildlife, not the hunting clubs they have become. My first stamp was for 2006 and I have done one each year since.”

What sort of response have you had to your idea — from other readers, photographers, birders? How about hunters? Do you find people generally receptive to an alternative source of funding once they learn about it?

“It ranges from hostility to sympathy and understanding. The propaganda of Ducks Unlimited and the shotgun lobby influences the hunters, of course. One hunter told me if they didn’t hunt ducks they would overrun the country and destroy crops. He actually believed that the hunting was ‘keeping everything in balance.’ Even the Audubon Society in Seattle is sympathetic to the status quo, stating that Ducks Unlimited keeps expanding the reserves by buying new lands. They don’t mention that this is to insure more ducks for live target practice. At the other end of the cultural spectrum are the hikers, photographers, birders, and just the general attendees to the reserves, many of whom don’t even realize there is hunting going on there. They actually believe the ‘closed for maintenance’ sign, as I did until I started asking questions. Most of these people understand that alternative funding for the reserves is necessary and most like the stamp idea as a mechanism for that funding.”

When you’ve approached wildlife officials, what have the responses been like? Do you see any movement at all in the direction of alternative funding?

“I think generally no one who is being paid in part by hunters wants to rock the boat. Any change will come if they are forced to do it by public pressure.”

According to your understanding, the loophole — if you want to call it that — which allows hunting on refuges has to do with the term “management,” is that right?

“It is legally mandated and was instituted for funding because our congress failed to live up to the funding obligation of the original NWR creation act. Ducks Unlimited and others have donated money to purchase lands for expanding the NWR system with the provision that hunting must be allowed.”

How would you feel about a national tracking system for the current Migratory Waterfowl Stamp (Duck Stamp) as opposed to a separate stamp? That is, a stamp where funds from non-hunters would be clearly delineated as such with every purchase?

“The idea of a separate stamp is a clearer statement of purpose; there is no way to confuse the motive of someone who buys a NO HUNTING STAMP. As an educational tool, a separate stamp makes it much easier to start a conversation about the situation. It needs to be a separate focal point. A separate stamp would also give a separate group of creative people an opportunity to contribute to the process each year. I would like to see the NO HUNTING STAMP design incorporate photography as opposed to painting. Photographers have become a huge visitor base at the reserves. Allowing them to compete for a design would reflect their enthusiasm and affection for the reserves in a positive way.”

Was there a time when you purchased Migratory Waterfowl Stamps or felt differently about this issue?

“No. I have been vaguely aware of duck stamps only because of my interest in art. I’ve never fired a weapon at a duck and can’t imagine how anyone could. But those who like this sort of thing should not be doing it at the National Wildlife Refuge.”

What would your hope or expectation be, if a no-hunting duck stamp were implemented for refuge funding? How do you envision the outcome?

“My hope is that it would contribute to creating enough funding from the non-hunting public to eventually disrupt the financial hold the hunters and gun advocates have on the management of the reserves.

I think the trend in the next few years is going to be less interest in hunting in general. Australia points the way. Waterfowl hunting has been banned in much of Australia because the public was made aware of the unjustified brutality it promoted. I’m not hopeful that a general ban of waterfowl hunting will ever take place in America, but hunting on the National Wildlife Refuge is the right thing to challenge.”

What do you see as the biggest obstacles in realizing this idea?

“The NO HUNTING STAMP needs to be integrated into the waterfowl stamp promotional and sales framework as an alternative way for non-hunters to support the reserves. Getting this done will probably require an act of Congress – literally. I hope to find the right mechanism to take the idea to the next level.”

How would you feel if something like a No Hunting Stamp were to result, initially, in more equally-shared resources? For instance, what if it led to a shortened hunting season where it became clear that wildlife viewers contributed enough funds to warrant a change in policy?

“Exactly. A good model would be what I proposed to the California Fish and Game folks. During the waterfowl hunting season the reserves generally limit hunter access to three days a week, or I think in some cases to part of the month. I proposed that in the ‘no hunting’ days access could be allowed to photographers, birders, and any other people who would be willing to pay a comparable ‘day fee’ for access. It is the peak bird season after all and yet the only access given is for killing the birds.

I understand how we got here. It will take a lot of education and effort to get people to shell out American dollars to support this. That’s why I think a good start would be something like a real shared use during hunting season. The NO HUNTING STAMP would fit nicely as a voucher for access to the non-hunting public, and it would create a new revenue stream for the National Wildlife Refuges.”

Is there anything else you’d like to add to this discussion?

“Should the National Wildlife Refuge be a refuge for wildlife or a hunting club? May this lead to some discussion of this question.”

** As a final note, Marlin will donate profits from NO HUNTING STAMPS to “any nonprofit that initiates a meaningful plan to promote the idea of prohibiting waterfowl hunting at all National Wildlife Refuges.”

You can purchase a No Hunting Stamp and learn more about this project at the No Hunting Stamp page. There’s a corresponding movie and slideshow advocating for a stop to hunting on our National Wildlife Refuges.

About Marlin Greene: View Marlin’s photography and prints at One Earth Images and his website design and programming  at 3Hats Internet Services.