American Coots creep out of lakes like creatures of the bog, drawing up mud with their lobed toes as they march, single file, from the water to their feeding grounds. I once watched hundreds emerge, one by one, from the low-tide flats at San Leandro Marina in California, forming a line of black baubles from the shoreline to the golf green where they stopped to feed. Almost as suddenly as they appeared, they marched back across the fairway and into the coming tide. Because of this behavior, when I watch American Coots, I always imagine the old drawings of evolving fish, clawing their way out of the primordial soup. 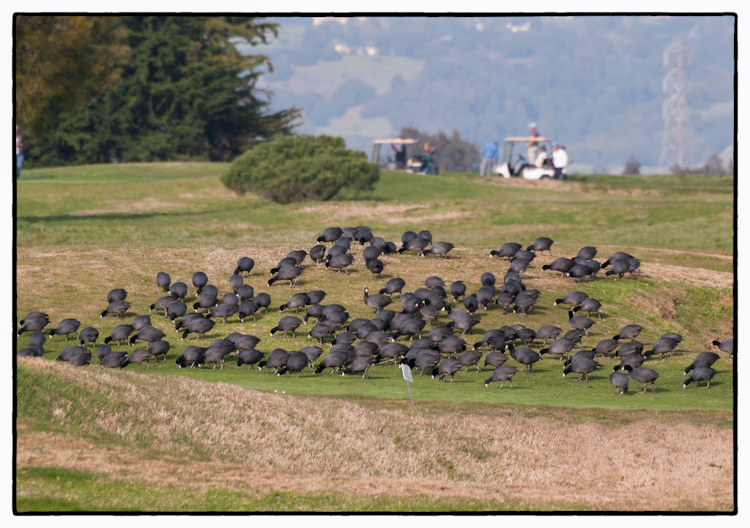 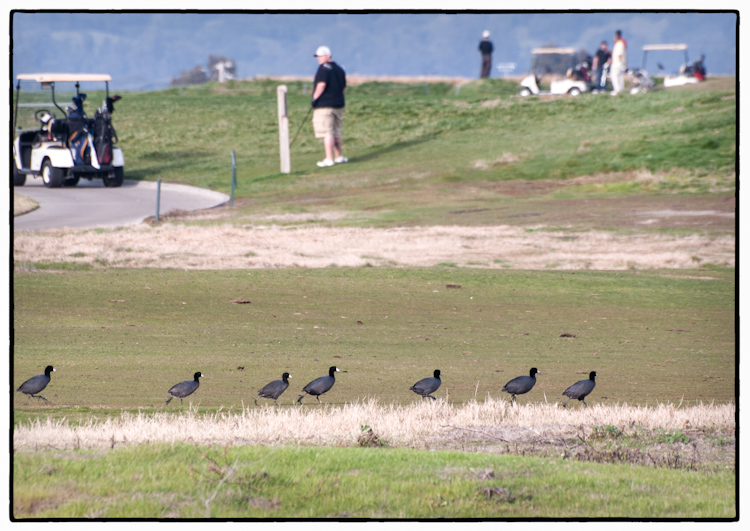 Coots are a species too often taken for granted, considering the fascinating displays they engage in … like the single-file march and like this territorial tussle I captured with my camera in San Francisco a few years ago. Kieran, at one of my favorite blogs, Next Door Nature, wrote a great post about American Coots and other birds that need a running start for take-off, another behavior that’s amazing to watch.

This afternoon, between downpours, I came upon a cover of coots, grazing along the pathways of Lake Union in Seattle — no tussles, no running takeoffs. I stopped and sat on the path, hoping they wouldn’t mind me and my camera. They didn’t. These birds are habituated to human feet and bikes. 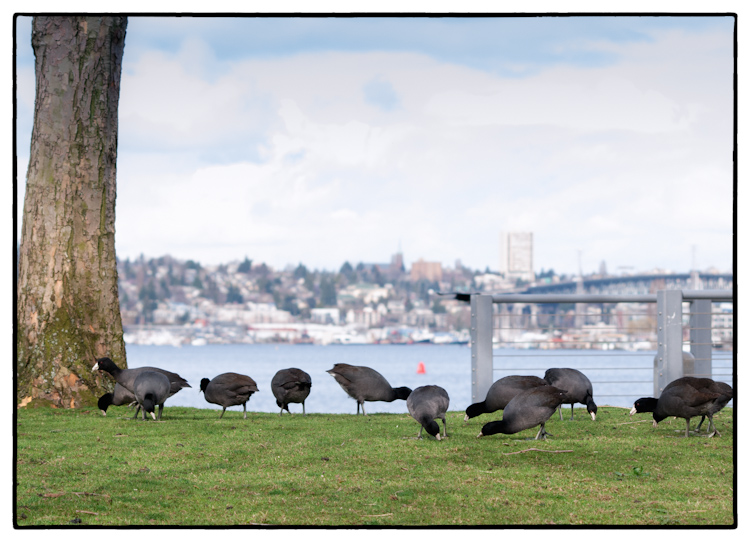 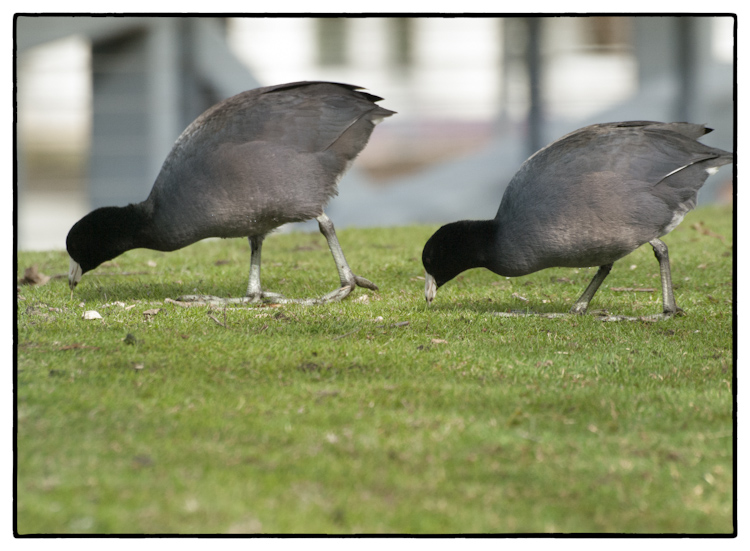 I’m not sure you can find a lake more urbanized than Lake Union. The shores are almost completely overtaken by marinas, house boats, commercial docks and various industries. Add to that, seaplane traffic from Kenmore Air on South Lake Union, plus heavy motor boat congestion, and I marvel that birds find any sustenance and solace in this part of town. But the waterfowl species I’ve seen on and around Lake Union so far include the coots, Canada Geese, Common Mergansers, American Wigeon, Cormorants, and Mallards. The new park at South Lake Union offers feeding, bathing and sunning grounds — if a little overpopulated by humans. 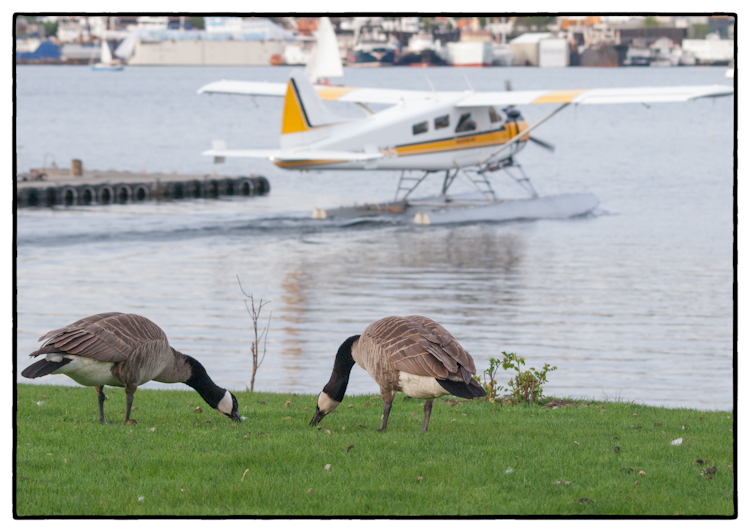 There’s an interesting interplay between bird species at this location, with the regulars — Canada Geese and American Crows — commanding the turf most often. At almost every location where crows reside, the crows serve as the best early warning system for predators. The geese are a close second, paying special attention to dogs and children coming down the path, their two most ardent nemeses at this location.

American Crow on alert above the park at South Lake Union 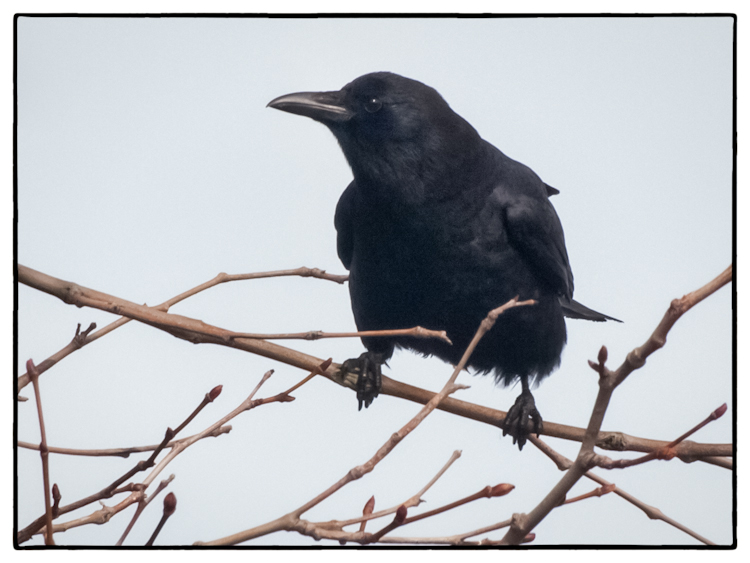 I can’t quite distinguish the calls yet, but the crow and goose call for “dog” is becoming more clear to me. Whether or not they can say to each other “dog at three-o-clock, retractable leash” I’m not sure. But if I’m sitting with my eye plastered against the viewfinder, I can almost determine — without looking up — the oncoming danger, by the way it’s expressed. The birds are also smart enough to know that a leash doesn’t mean a thing, given how many people give their dogs leeway to chase the geese and other birds.

So, it was in this environment I came upon the American Coots, so languid in their dining that half of them were lying on their bellies as they ate. 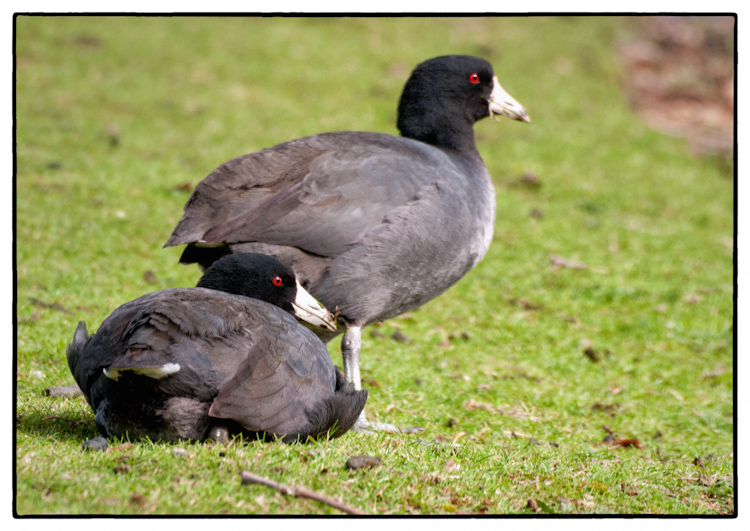 But, it is Lake Union, after all, and there are bound to be kids and dogs. So, at the first signaling of the crows, the coots raised up in alert and ran for the hills. Well, it’s one hill — a steep slope down bark and vegetation, to the lake below. A few of them fluttered halfway down instead of scraping their toes on the incline. 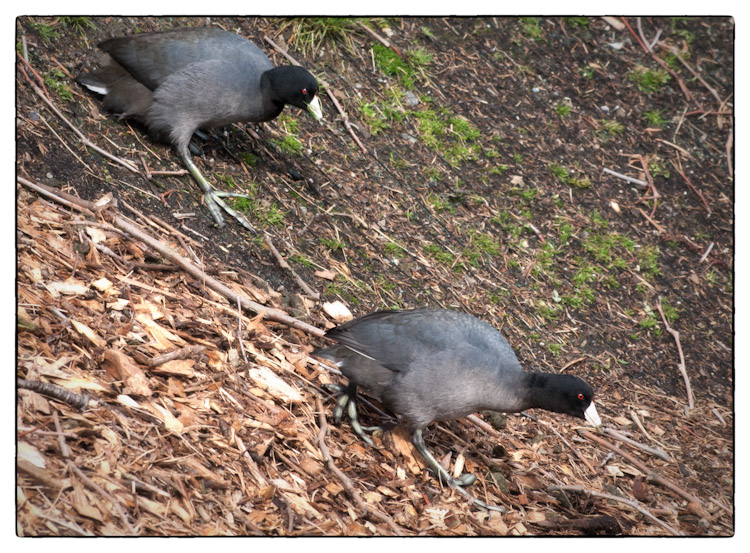 The group huddled and preened until the danger passed, then they all crept out of the mud, and back up the hill. 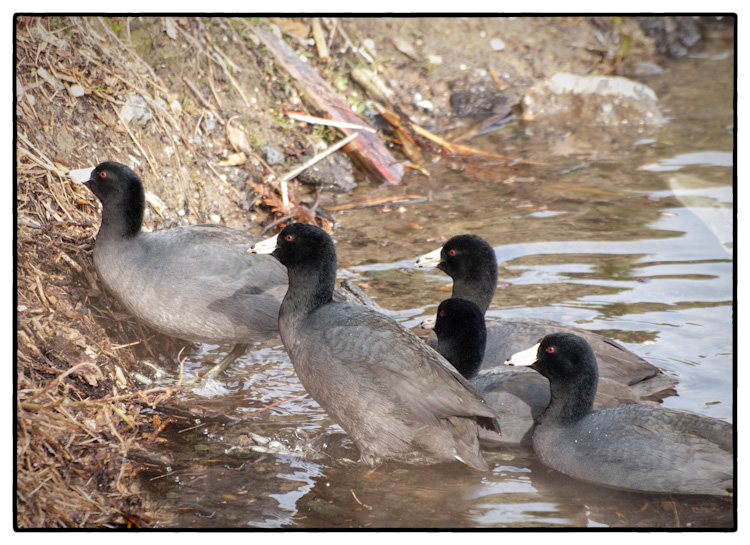 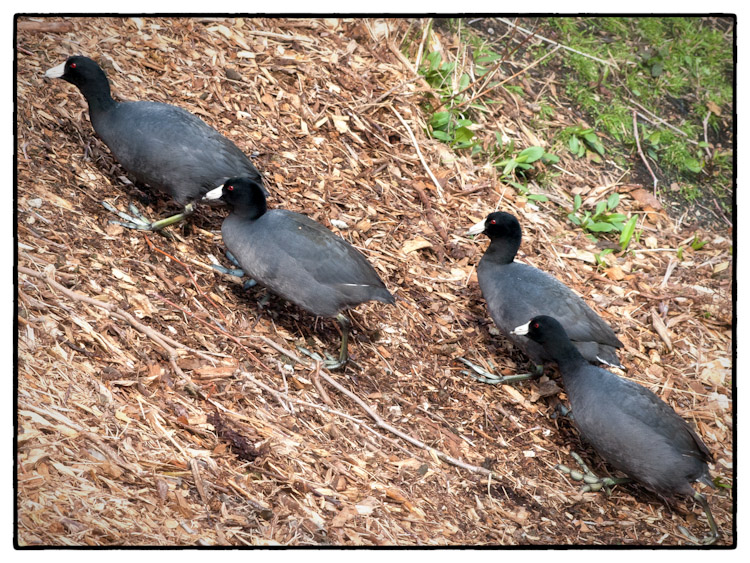 This happened a few times, and each time, the coots would just chill at the bottom of the hill until the coast was clear. Watching the energy expenditure — in the same way I saw shorebird flocks disperse as dogs and runners ran right into them on California beaches — it’s not surprising when you see studies that show how human and dog disruption affects feeding behavior and can even drive birds away from habitat. 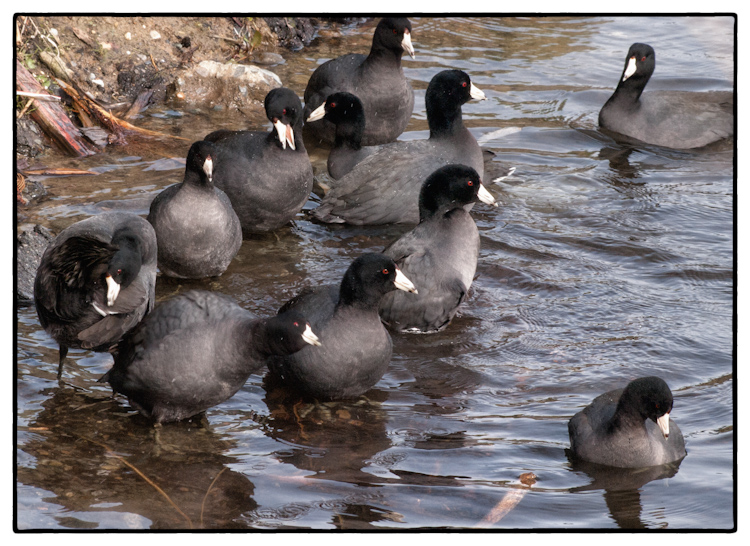 On the third or fourth trip back up, one of the crows decided that the cove where the coots were resting was perfect for his bath. And, he didn’t want anyone else around. So, each time the coots tried to climb the hill, this crow would buzz them, driving them back down and away from their launching point. Unfortunately, my lens hunted a bit too much against the busy background, so I was only able to grab a few frames of the crow at rest, enjoying solitude after harassing the coots. 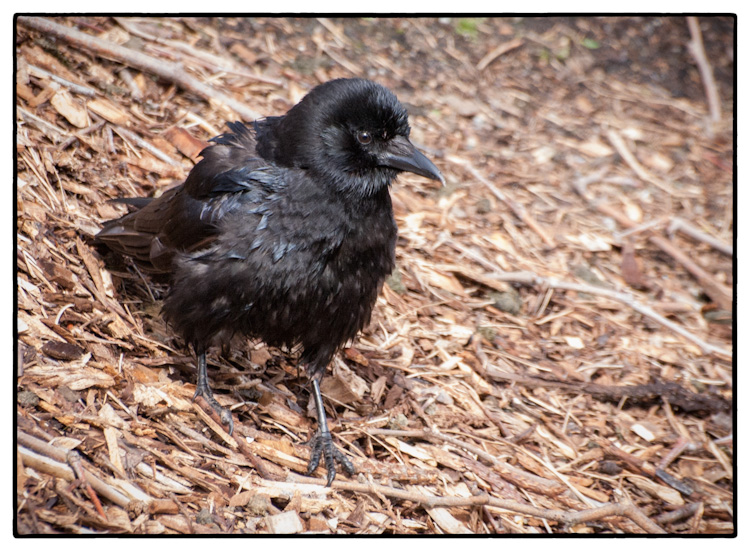 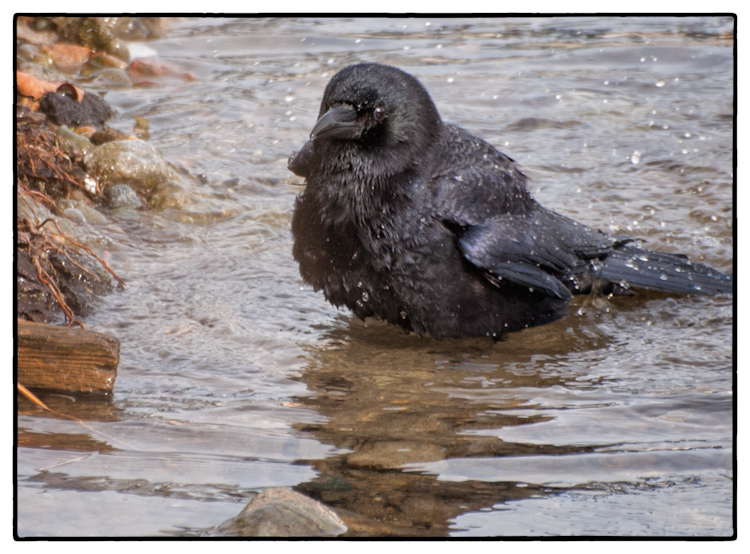 I can’t say I’ve seen a crow take on American Coots so aggressively. I’ve seen gulls buzz a raft of sleeping ducks, passing within inches of the ducks and waking them all up at once, before moving on. Is that gull humor?

The crow finally retreated to a branch for preening, and the coots noticed, big time. They all trudged up the hill, one after the other.

I left them at this point to take care of their business without me looking on — and to actually finish my walk and get some exercise, a goal that’s become much more difficult since I started carrying around a telephoto lens years ago. 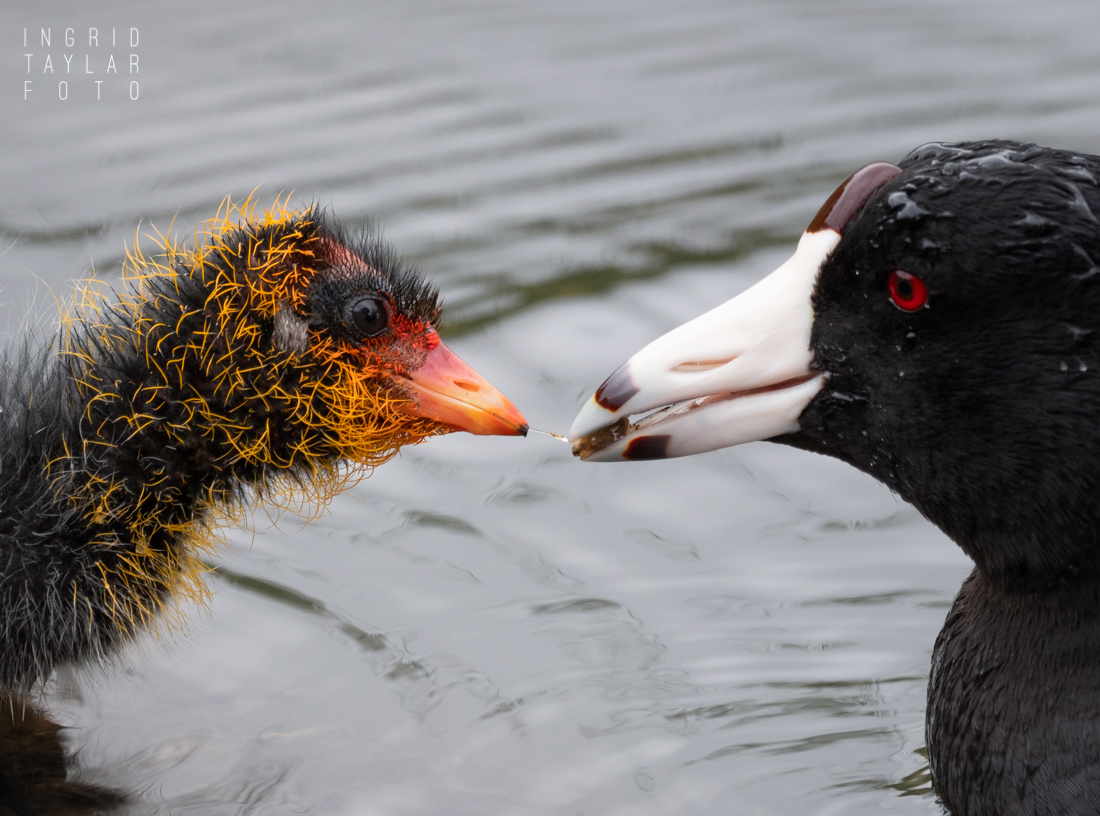 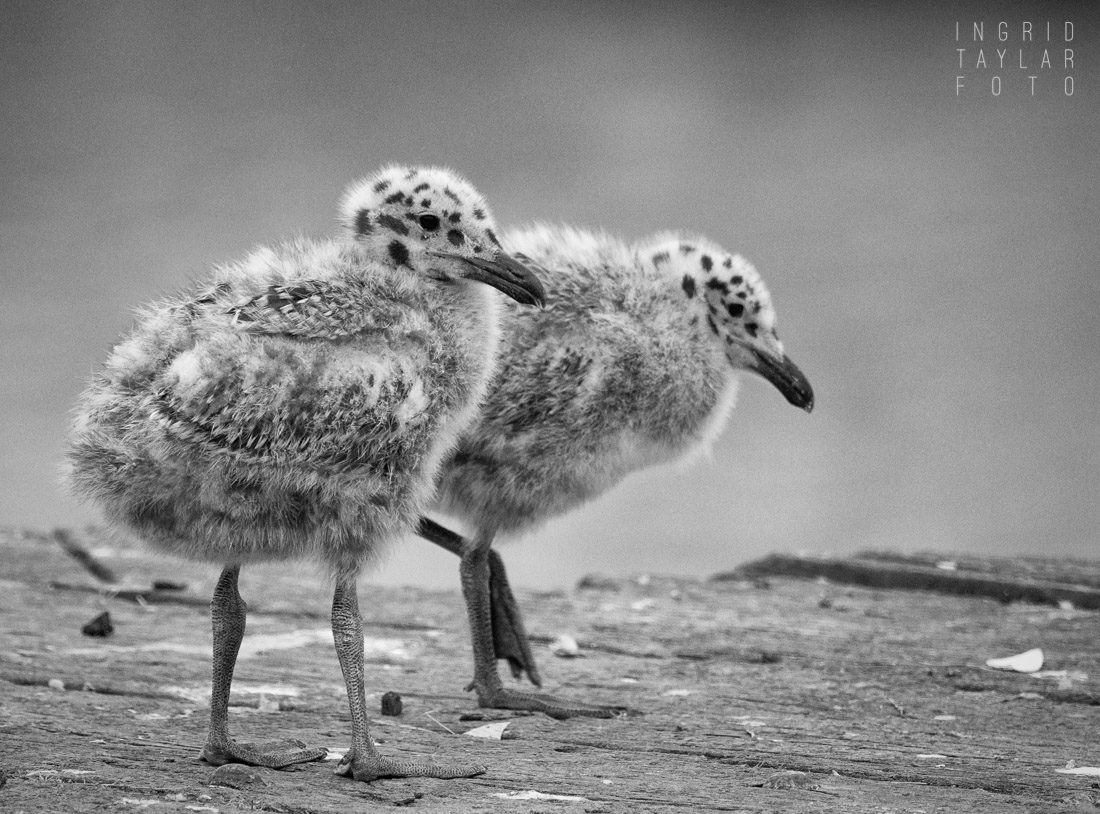