It seems like common sense … to slow or stop the car if you see an animal on the road. But, in recent weeks, I’ve had several incidents where birds were clearly in harm’s way and people refused to either stop or take even 30 seconds off their commute to let an animal exit the roadway.

The first was a situation of Canada Geese guiding their powder-puff goslings across a busy arterial. The crossing was slow and I could see trouble brewing, so I stopped to flag traffic in both directions — “tried” being the operative term. More than one person swerved around me instead of slowing, nearly crushing the goslings each time. The geese would jump back in time, but the misses were so close I would have busted a blood pressure gauge.

This went on for eight or nine cars when finally someone driving in the opposite direction noticed the situation and stopped, blocking the road. She waved down traffic on her side. The goose family made it across safely.

Not long after, Hugh and I saw some gawky teenage goslings and their parents attempting a similar stunt. This time, the bigger kids were easier to see, but again, we had to stop and yellow-flag the speed demons on the track. 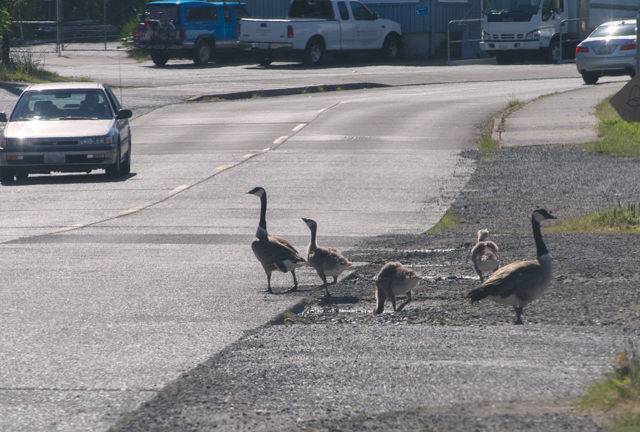 A couple of weeks later, Hugh and I were in a nearby neighborhood when four adult Mallards made a hard landing in the middle of a rush-hour intersection — a near ramp strike. They scampered left, then right, then left again, stunned by their landing. Some drivers didn’t see them. Others did — and still smoked the tires at the green light. In this case, it was pure luck that another pedestrian handled one side of the intersection, while we helped with the other, and the ducks made it to a sidewalk and closer to the lake where they should have been landing in the first place.

The last incident happened yesterday and smashed my heart up good. We were on our way to catch a morning ferry, passing through Seattle’s University District. On a well-traveled thoroughfare, we passed a crow flailing by the opposite side of the road, her beak agape, flapping weakly but unable to move. We swerved to the side and I ran back to grab her before another car could hit her. As I got to her, I saw she’d closed her beak and also her eyes. When I lifted her off the pavement, her neck was limp in my hands. I couldn’t see or feel any sign of remaining life.

As I carried her to a cushion of grass, away from the brutality of asphalt, I saw the feature so characteristic this time of year: the crow’s pink gape. It’s the fleshy, light-colored spot at the base of the beak, indicating this was a young crow. She would have had blue eyes, too, had her eyes been open and bright. Baby crows have the most vivid blue eyes which morph to black as they grow older and more seasoned in this world. 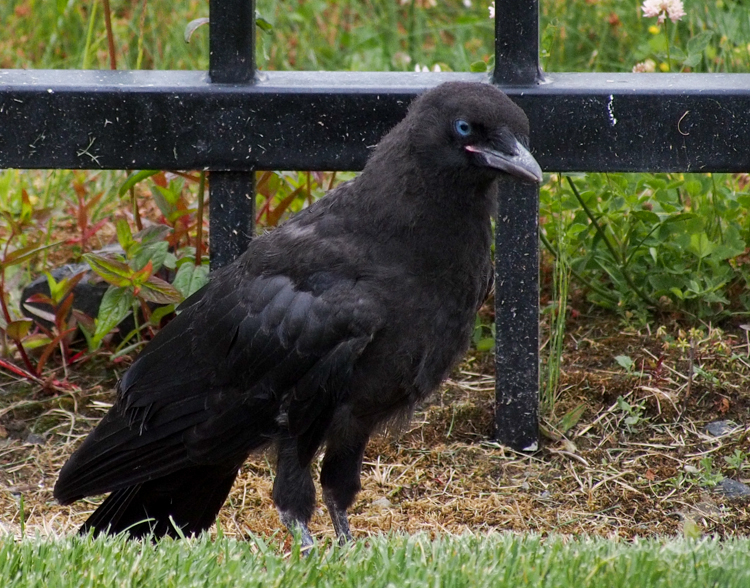 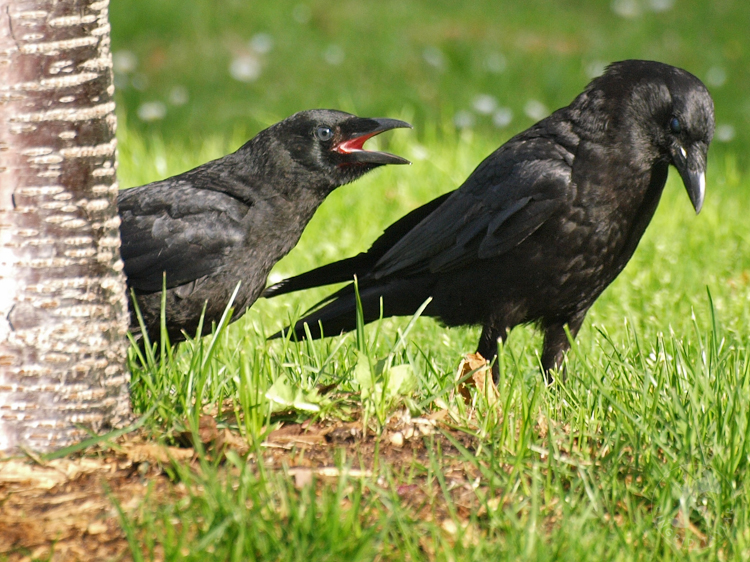 By this time, Hugh had parked the car and run over to see if he could help. A college girl walked by us on the sidewalk and said, “oh yeah, I drove by that bird when it was alive earlier on the road.”

Overhead the crow’s parents were in a fury. They dive bombed us, screeched at us, did everything they could to get us away from their baby. There was obviously nothing we could do to convince them that we intended no malice toward their fledgling. That was the most heart-crushing aspect of all.

When we were sure there was nothing we could do for the young crow, we left her in the grass, under a tree, and trudged back to the car. Not ten feet up, I saw another black, suspicious shape by the side of the road. Not another crow?!? I moved toward the shape. Yes, it was another young crow — the same age, with the same pink gape. Because of the proximity, I assumed it was a nest mate. This crow was clearly dead and had probably been hit earlier. I moved him, too, to the grass by the tree and choked back what felt like a cloudburst.

The crow parents followed us up the street, mobbing us and crying out. I could feel the whoosh of their wings swipe my hair. Although I told them how very sorry I was, I knew that it had no bearing on their experience.

As we eased our way up the road, one of the parents followed our car to the end of the block — flapping, frenzied, diving, calling out. And that’s when I lost it. I cried almost the full hour’s journey, and choked up intermittently throughout the day. These two diligent parents lost the two youngsters they’d cared for, protected, and kept well fed against all environmental odds … until the babies had the great misfortune of fledging alongside a road.

I used to think that with time, it would all get easier — that I would become more hardened. But, it doesn’t. And, I don’t. Encountering suffering is always difficult. The emotional dam buster for me this time was meeting the young woman who admitted she’d driven by the flapping, injured baby crow earlier and hadn’t even thought to stop.

I realize a lot of people don’t know what to do. Hugh and I have the benefit of some training, so the process of rescue is more comfortable for us than it would be for many other people. We are familiar with handling birds, a skill I didn’t always have either. And even then, you can’t always stop safely without jeopardizing yourself, other drivers and even the animals in question. There are caveats, as with everything in life.

But, there’s one thing that requires no training, no comfort zone, no expertise: a measure of awareness. People can easily slow or stop for birds when they see them on the road. We’re the ones who paved their paradise and put up a parking lot (and a freeway and an arterial). It doesn’t take much out of the day or from the drive home, to let a crow or a goose cross the road safely … to their home. 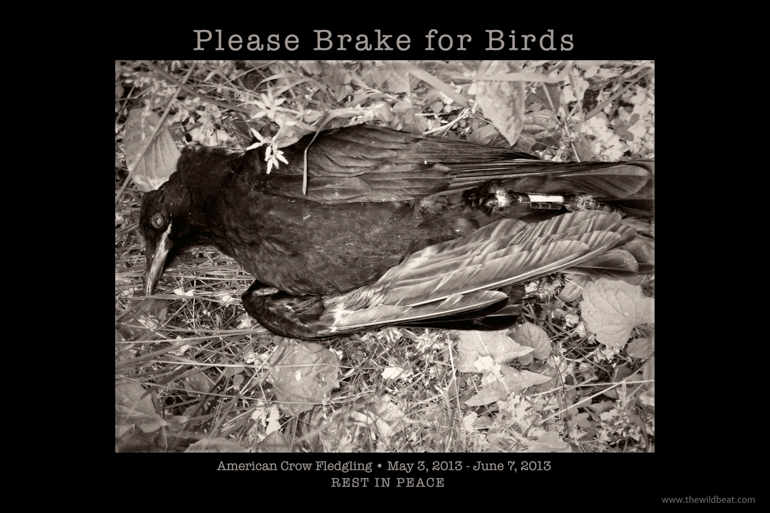