Home--->Blog--->Coexisting with the Rainbow Birds
Previous Next 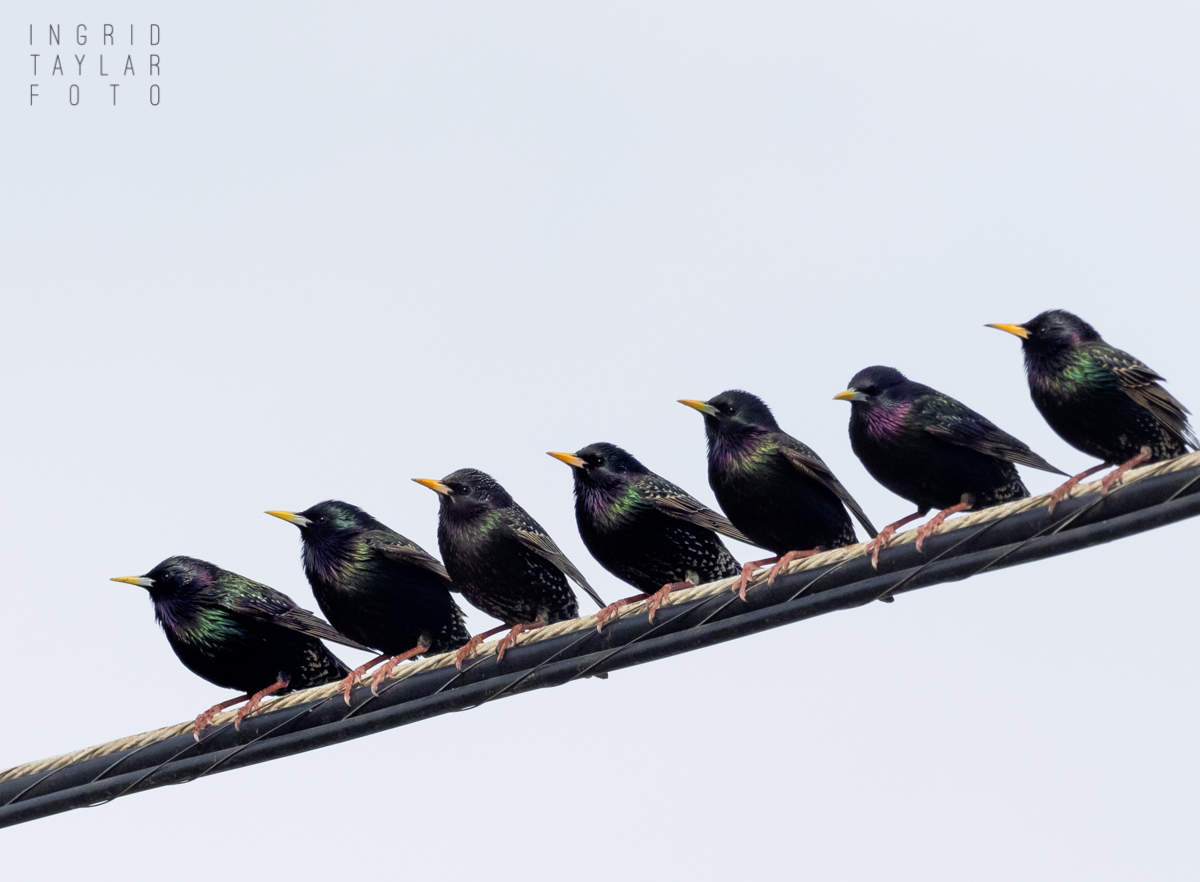 The unsung, rainbow beauty, the European Starling, non-native and maligned, is often hated in the States for its unchosen status. A star among the original alien birds, the starling is fiercely brilliant. And, because of that brilliance, like us, is able to survive through tenacity and, sometimes, encroachment. En masse, they are Vasarely in the sky, artists through undulations and murmurations and synchronized illusions. They are also feeders of grain and appropriators of bluebird boxes, and so hated and persecuted for that intractable force of survival. The hypocrisy of that hatred is evident every day as we, ourselves, pollute, propagate, develop, and destroy far beyond the bounds of any starling effects.

As photographers, we witness the complex interplay of native and non-native species when they’re in relative balance, like goldfinches padding their autumn stores on thistle, Monarch butterflies roosting in leaves of eucalyptus. We also come to know and love the animals as individuals, like the determined starling pair I watched run relays of food to growing chicks under the corrugated loops of an urban grain chute.

We also see the imbalance. Those same fields where I used to photograph goldfinches and baby bluebirds by the dozen, perching on their first thistles — those thistles, with their stubborn roots, spread beyond tolerance and are now quiet, wiped clean with herbicide, no native seeds to take their place. An imbalance rectified by further imbalance, in the hope of ultimate balance.

I understand the reasons behind nature nativism, given the sometimes disastrous effects introduced species can have. But I’m not given to blanket assessments as a rule in life. The purity standard has led to many an unjust and sometimes horrific outcome in this world. It’s true that an invasive takeover, wiping out all native species at a clip is not nuanced. But some situations are … and I appreciate those in the field who are willing to view the effects of non-native plants and animals on a case-by-case basis rather than in the aggregate. i.e. how is it affecting this particular area or ecosystem?

In a paper on nativism in biology, Jonah Peretti poses this question, relating to non-native species: “If peaceful coexistence in a multicultural society is a good goal for humans, why not for other species? The idea of purity is central to current debates in environmental science, politics, and values. What sort of nature should environmentalists admire, protect, and value?”

For today, through my lens, for this starling crew on a wire, with Myna bird chatter in full bloom, fields of wild grass seed below, I chose a snapshot of admiration and peaceful coexistence.