On the surface, Brant Geese — in this case, Pacific Brant or Black Brant or Branta bernicla — are a marvel to behold. That’s but a superficial observation. There’s a lot more to a Brant than her aesthetic, but let’s face it, aesthetics form our first impressions.

Clustered together like Tribbles, they call out in staccato, a sound sometimes described as “throaty” or “crackling,” but which to me is the tuning of an orchestra horn section. (Click here to hear it.)

I saw my first 2012 Brant earlier this year after following that distinctive call through West Seattle, finally reaching this particular expanse of Puget Sound. Pictured here is the shoreline of West Seattle, with some Brant Geese dotting the foreground. 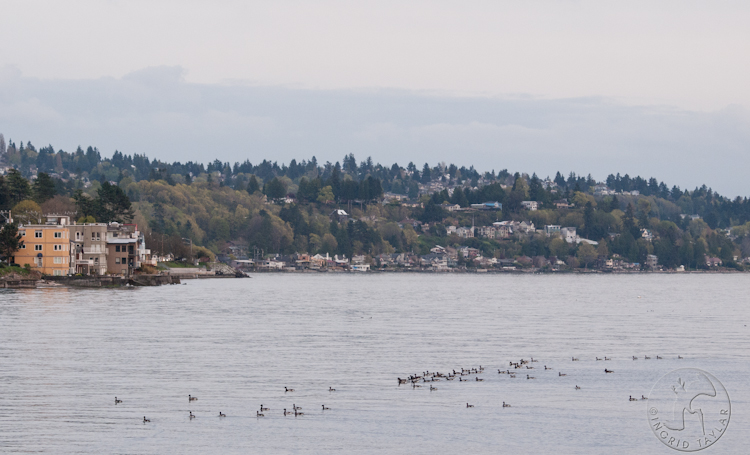 A few weeks later, Hugh and I stopped by Point Robinson Lighthouse on Vashon Island, a quick ferry ride from Seattle. Between rain soaks, we saw (and heard) this spectacle in the distance: a Brant and rainbow intersection on Puget Sound; and, a distant flock of Brant combing the shoreline for edible grasses. 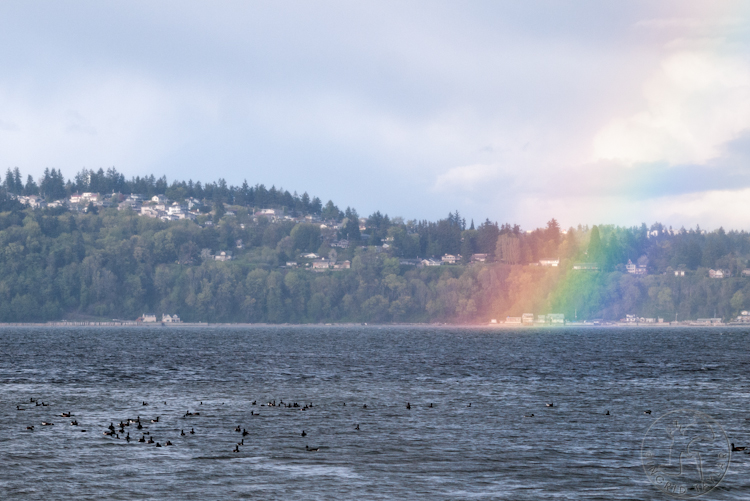 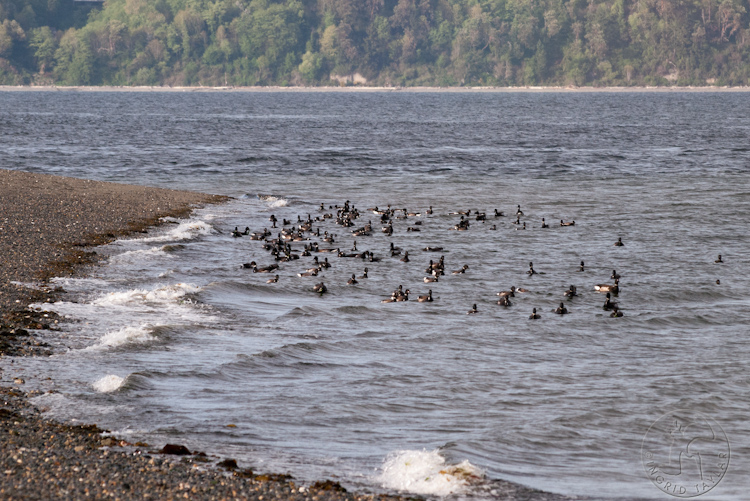 Not wanting to disturb their foraging, we planted ourselves on driftwood at the farthest end of the beach … me, of course, hoping they might swim by. We chose a spot that didn’t block their passage, but which would give us some shots if they foraged at the tide line. I wasn’t sure how they’d feel about a photographer planted on a log, but they didn’t seem to mind. They kept coming. I counted at least 100 Brant, possibly as many as 150, as they swam by in single-file formation. 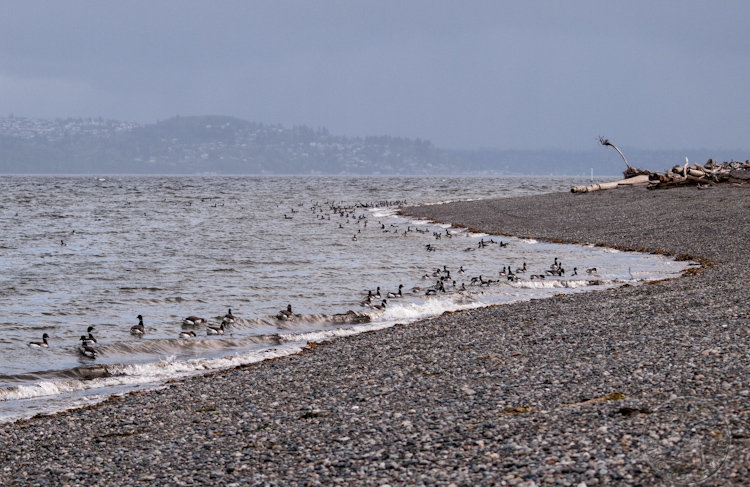 As almost always happens to me when I’m suddenly photographing a huge flock, I get too excited and don’t know where in the heck to point my lens. That’s a slight exaggeration, but anyone who photographs knows the feeling of that fleeting bounty — in another second it will be gone, and the opportunity lost. What I wanted to capture was Brant riding the surf and chowing on what I believe to be sea lettuce, two behaviors identified with these particular geese. They forage at the nearshore for their favorite foods, and the super-low tide exposed the growth of greens the shallows. 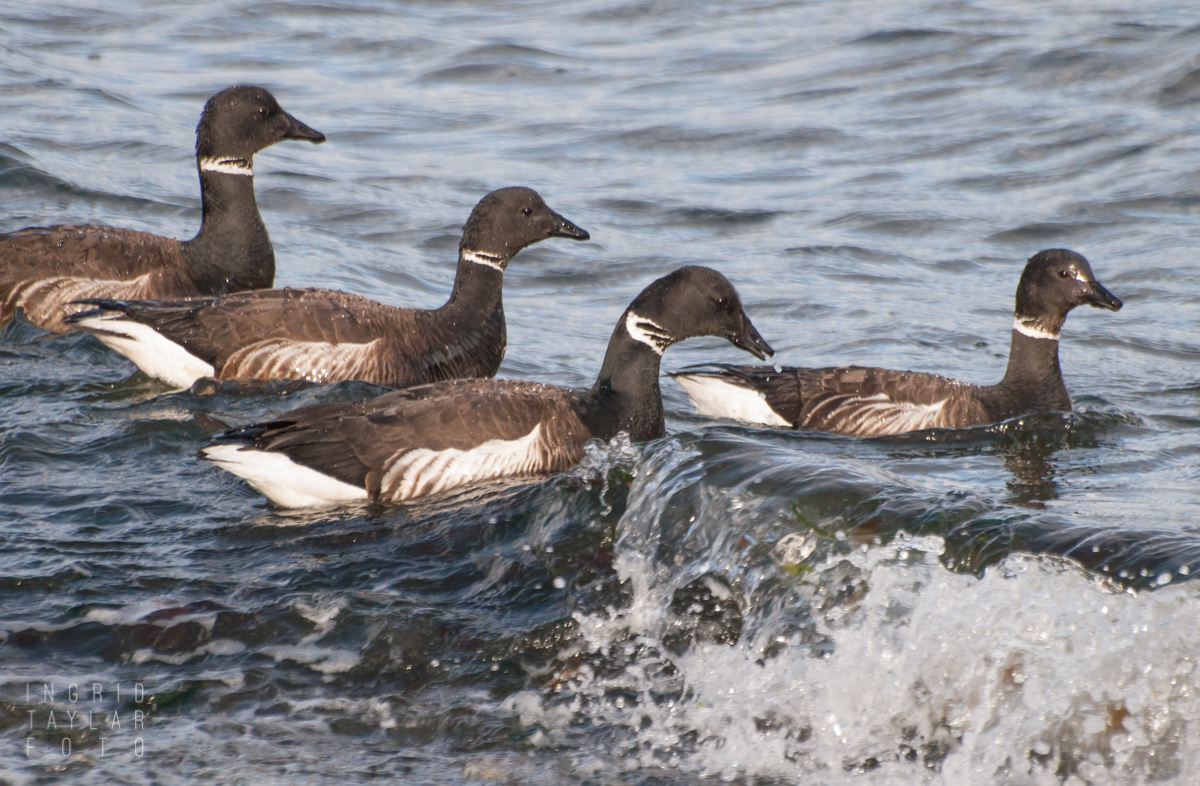 The light was almost too dim. And, forming on my lens were the warning droplets of the next downpour. There was, however, a single ray of sun, losing its life in the dark folds of nimbostratus sky. I snapped a few shots as the sun faded away. 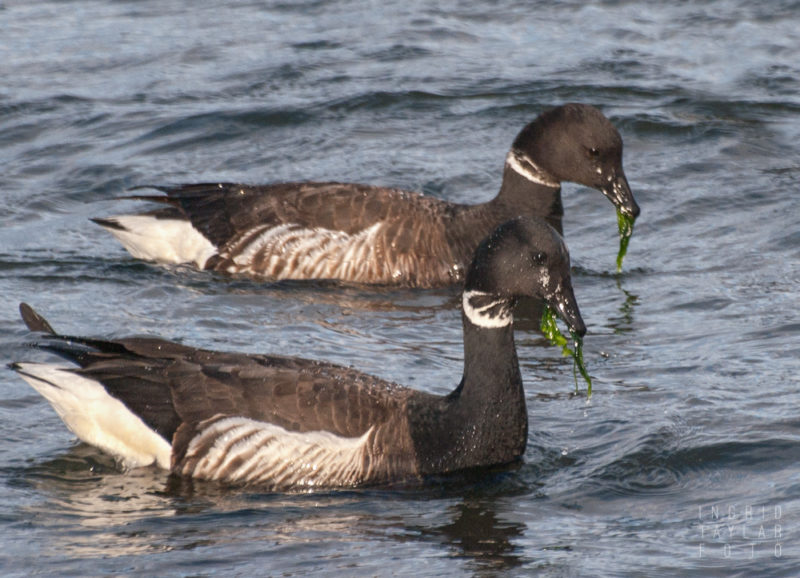 Brant Geese favor eelgrass which hints at the complexity of the Brant to which I referred earlier. Brant are dependent upon and sensitive to ecological changes that disturb these precise food sources. They also appear to be indicators of climate change and warming, with many more Brant now wintering in Alaska, where Mexico used to be their migration destination. There’s a great, in-depth piece at the Cornell Lab of Ornithology, which discusses the sensitivity of Arctic bird habitat, and the effects of oil exploration on species like Brant. 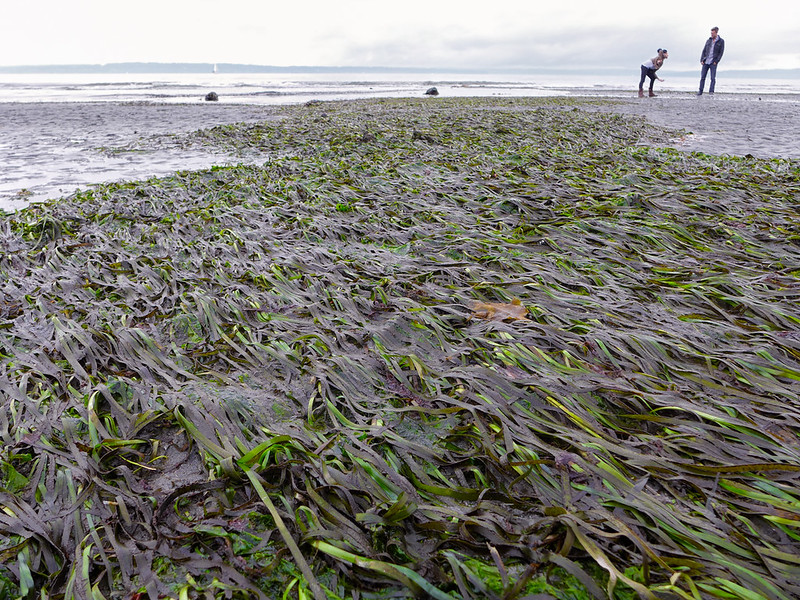 The Brant are tied to this cycle in tenuous ways, given the loss of estuarine habitat and the intrusion of human activity into spaces formerly silent and sacred for these Pacific Brant geese.

This precise interdependence brought to mind an article I just read in the most recent Bay Nature Magazine: The Forager’s Dilemma: What’s Right and Wrong With Gathering Wild Foods. It’s material for a separate post, but the article discusses the potential effects on ecosystems and wildlife, created by the recent popularity of foraging. I’ve wondered about the growing craze for personally-foraged seaweeds and grasses, as well as the increased harvest of forest lettuces and mushrooms — and how those quantities, multiplied, might factor into resource depletion for wildlife, especially animals like Brant who depend on a specific food and cycle of replenishment.

As I say, that’s another post altogether and a digression. But, if this facet of ecology were better understood by more people, there might be less resistance to curbing our own development, for the sake of another species. Because obviously, it never is just a single species in question. Brant and eelgrass go together like … well, Brant and eelgrass. It’s a singular, viable, and beautiful relationship, and one I hope we can help them sustain in spite of our populous selves. 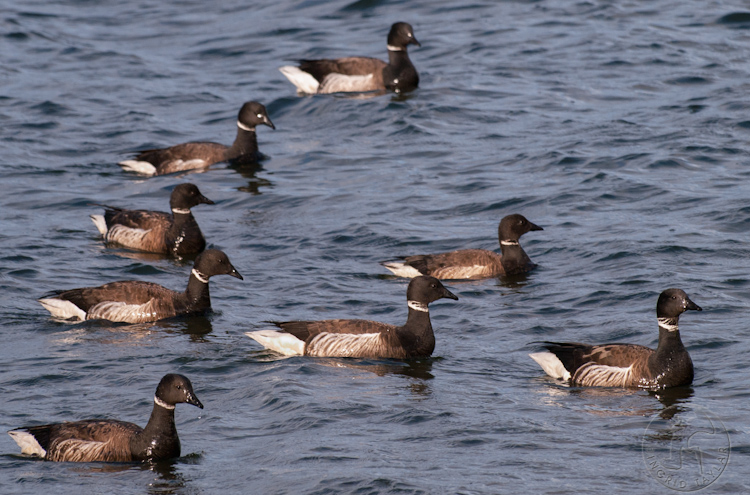