If you work with or care about animals, the nonhuman ones, eventually, someone will say something like, “shouldn’t you care more about what happens to people?” That question doesn’t faze me anymore. Given our predominantly anthropocentric world view, I’d actually be surprised if people didn’t ask it. I have plenty of answers for why it’s a good thing to care about species besides our own. But my top four [anthropocentric] ones are:

So, I have those pat answers. What I struggle with is how, as a photographer and writer, to actually help alter the model through which humans view the natural world. What is the best way to translate what I see and experience, into something visceral and tangible that might crack the veneer of that prejudice? And how do you take what, to many, is an abstract concept of a feathered animal, and infuse it with the richness and complexity we know is that animal’s existence?

I don’t have any absolute answers. But, those questions color everything from the subject and compositional choices I make, to my field experience, and how I represent for wildlife in public. In this context, anthropomorphism has beneficial components in bridging that chasm. It’s an imperfect tool in the context of an anthropocentric model. You know the adage … people will protect what they care about. Sometimes getting people to care is as simple as making an emotional connection between our experience and the experience of another.

Here’s an example. The other day, I was photographing an Osprey from a public walking trail near Seattle. 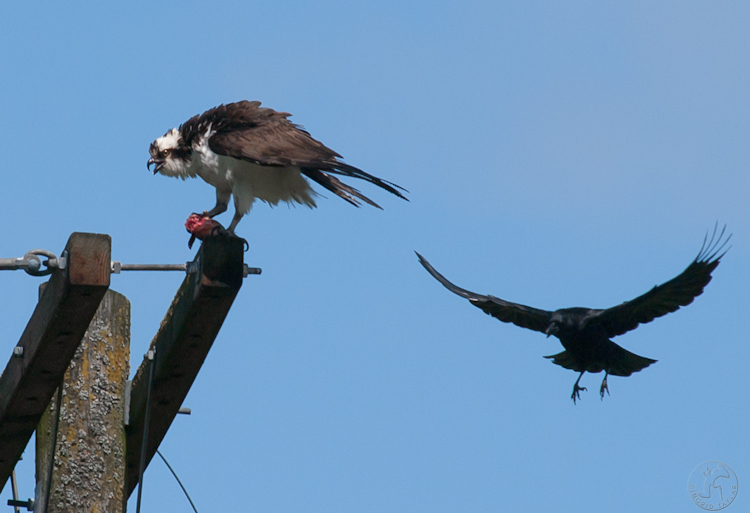 The male Osprey was eating his fish on a utility pole, where a hungry crow decided to perch beside the Osprey for a handout. After the crow arrived, the Osprey sat on that fish, without eating, for almost a half hour, as weather changed from blue to gray and blue again. 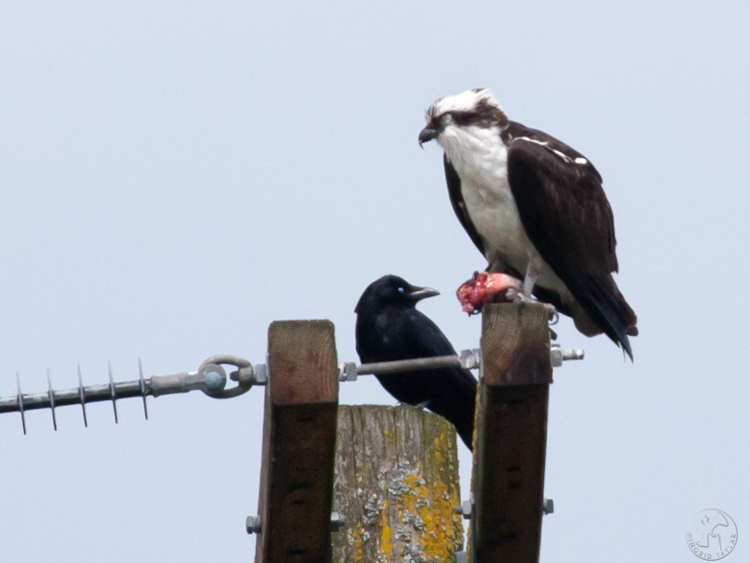 Meanwhile, the hungry female Osprey called incessantly from the nearby nesting platform. (The poor female waited almost an hour before the male finally flew over with the remnants of the tail, which she swallowed whole, mumbling the entire time.) 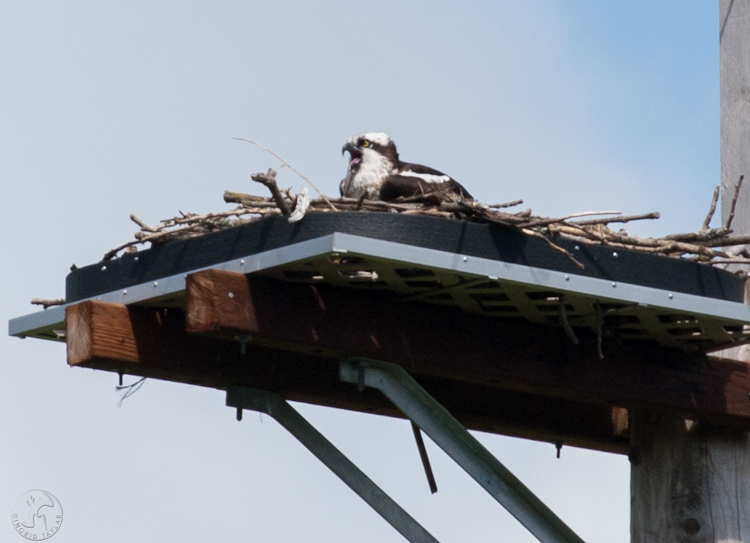 A camera tends to be a magnet for conversation … which is one of the reasons I don’t advertise sensitive wildlife areas by planting myself with a tripod in front of, say, a vulnerable nest. With these Osprey, I was shooting across a river at 600mm equivalent, and the images are heavily cropped. The Osprey are at a safe distance for viewing.

The area around the nesting platform is surrounded by office parks and secure business installations. So, nearly everyone walking by was wearing a credential or lanyard. And, I would say 99 percent of them stopped to ask me questions about the Osprey. The first question was usually, “are those eagles?” The next most popular question was, “is that a baby crying in the nest?”

I’m no Osprey expert, but I explained what I’d been watching in terms of interaction — and how the female was crying out from the nest for the male who had the food. More than one guy said, “so, they have domestic issues just like everyone,” or “just wait ’til the kids come.”

Okay, in some circles, this would be red-alert anthropomorphism. I mean, I was trained to say “aesthetically pleasing” instead of “cute” when referring to abjectly cute animals. And clearly, I realize that an Osprey’s home life doesn’t come close to mine — except for the fact that we each live in small apartments.

But, I also believe that when those guys walk by on their lunch hour now, they will be looking at the Osprey through a different filter. They won’t be looking at the silhouette of bird with no personality. They’ll be extrapolating some of what we talked about, onto that distant form calling out from the nesting platform. They’ll see the Osprey unit as a family — not as a wildlife resource (which is obviously a lot easier to objectify).

I understand why cautions about anthropomorphism exist. It’s as inaccurate to apply our preferences onto another species as it is to deny that species their full social and emotional lives. As I note on my ethics page, “I don’t believe in stripping an animal of its individuality and personality simply because he or she is not human. We share some traits with non-human animals, and I respect that similarity as well as an animal’s unique and rightful entitlement on this planet. I love biologist Marc Bekoff’s term deep ethology: ‘Respecting all animals, appreciating all animals, showing compassion for all animals, and feeling for all animals from one’s heart.'”

I’m not sure how one comes to feel “from one’s heart” without some degree of personal association and empathy. It’s difficult, at times, to create that association through a two-dimensional image. But I think the stories we can tell through those images and around those images go a long way toward breaking down the damaging “us versus them” methodology of species interaction.