The Tenacity of Spiders

The Tenacity of Spiders

This is a re-post from September 2010. We’re coming upon spider and web season in Seattle, and I haven’t captured another video of web building since I shot this one. At the time, we were staying with friends who have a lush, Northwest garden — ample habitat for garden spiders, Northern Flickers, chipmunks and the other species who first welcomed us to Seattle.

I’ve seen the spiders, and they are us. Actually, they are better than us in their tenacity to rebuild after every assault. When you consider that a wave of a hand, a cloud burst, a wing swooping through the maze of silk can destroy hours of labor, it’s inspirational to watch their pure pragmatism in motion — no value judgments, no whining. Just the claw of the spider, hooking each line from the silk gland, wrapping it around the last thread, and repeating the cycle whenever the silks fray or fall.

I shot this with my Panasonic FZ50 (bridge camera), fitted with my Raynox DCR-150 for macro effect. The toughest part about using this lens is the tiny sweet spot. Hand held, it’s an exercise in isometrics, holding still and focused enough to keep the spider from moving into blur. I took the video this morning, after rain. 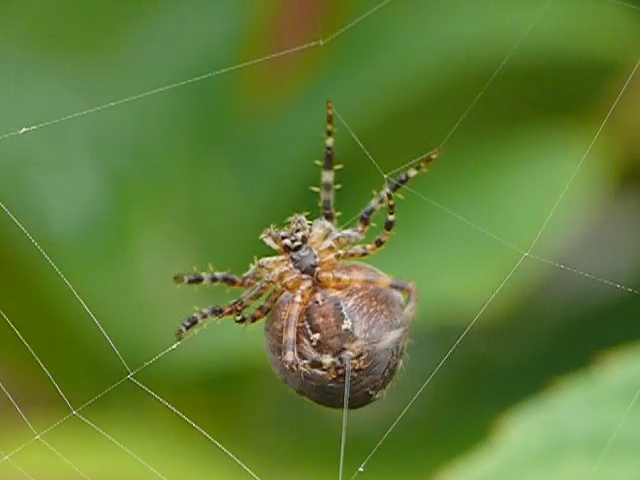 Spider silk is a multi-use protein fiber which starts out as a liquid in the spider’s abdomen. It’s used for webs, for protecting young, for wrapping prey, for ballooning, for draglines. And, it’s a substance we’ve been unable to synthesize, stronger than Kevlar. It is the alignment of glycine and alanine that accounts for the spider silk’s strength.