Until the esteemed Brewer’s Blackbird Sir Swoops made a name for himself by dive-bombing pedestrians, there’s a good chance he was just one of many birds in black, hopping along the sidewalks of San Francisco without much notice.

On first glance, blackbirds and black-colored birds may seem visually ordinary. But closer inspection always renders a more lively characterization. The birds below are not all technically “blackbirds.” Their commonality lies in color, so this is not a scientific designation by any stretch, just a short primer on why the simple use of “blackbird” is actually a misnomer in most cases.

The Brewer’s Blackbird below is one species of blackbird commonly found in the Bay Area (Swoops is a male Brewer’s). You’ll find them mingling with urban pigeons, sparrows and Starlings for human handouts, bathing in city fountains, and nesting in parks. If you’re not a bird watcher or nature photographer, you may not have noticed his citrine eyes — or the purple, blue and green iridescence that ripples across his feathers when light strikes.

Red-winged Blackbirds, another species, produce a distinctive song — a call that’s not quite a whistle, not quite dual toned or atonal, not quite a song. You can’t miss it once you know it. I hear it most commonly across fields where the males perch (like this one) calling out across their domain. Until you see him launch across the field, the crimson and yellow patches on his shoulders (or just crimson, in the case of a Bicolored Blackbirds) aren’t always visible. Females are variations of brown, lacking the striking blacks and contrasting colors.

American Crows are so common they don’t inspire much interest from the average person — except, maybe, for those who perceive crows to be a nuisance. And those, like me, who love and respect these brilliant animals. A huge flock of crows has driven a neighbor down my street to near madness with the sound fest they bring a few nights a week.

Thankfully, the Migratory Bird Treaty Act helps protect wild birds like crows in regulating if and when anyone can legally harass or hunt a bird. Legally, you can’t harm them. But we’ve seen guys out there like Ruprecht, banging pots and pans in an effort to drive the flock away. I like hearing their crow conversation during happy hour. And they settle in once dusk descends. I’m more annoyed by the banging pans.

Baby crows have vivid blue eyes. Until I fed the young birds at the hospital, I didn’t realize the youngsters’ eye color is a true baby blue. The eyes morph into a darker brown as the crow ages.

©ingridtaylar – It’s difficult to see in this image (click for full size) but the juvenile crow (left) has gray-blue eyes. 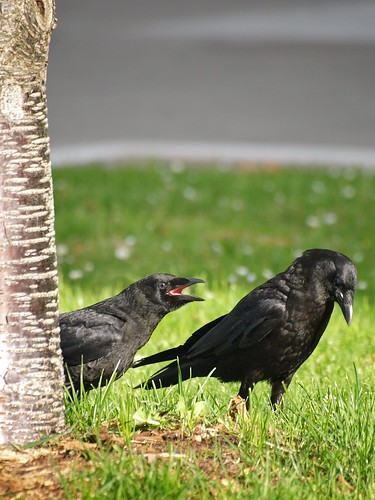 Corvids (crows, jays, ravens) are among the most clever birds. They are known to use tools. You may have seen this video of a crow bending a wire to use as a food acquisition tool:

Starlings, about whom I recently posted, are much maligned, often harmed, not necessarily appreciated. People might confuse Starlings with blackbirds and vice versa. The distinction is important beyond personal interest (again, provisions of the Migratory Bird Treaty Act).

Related to mynas, Starlings are excellent mimics and they can learn numerous songs and sounds. They are quick studies and one research program found they are adept at understanding human facial cues.

They are also beautiful. If people can put aside their sometimes-negative perceptions of Starlings, they will find extraordinary color iridescence like Brewer’s Blackbirds . . . and plumage variations throughout the year as with most birds (juvenile, molting, breeding, etc.).

More about black birds from the Cornell Lab of Ornithology: