I snapped this on the weekend before national t.v. crews showed up to fuel the celebrity of Swoops the Blackbird. (Click on the image for the larger Flickr version.) 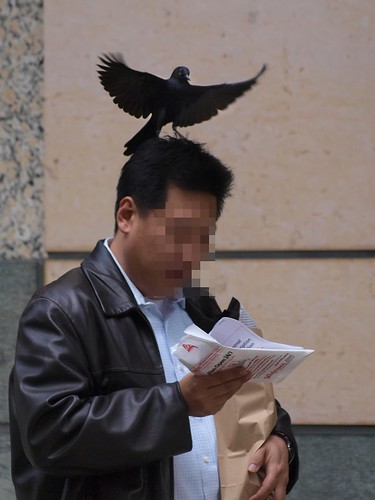 Swoops, a Brewer’s Blackbird with a nest of young to protect, perches on the awnings overlooking his brood and buzzes pedestrians who venture too close to his nest.

This behavior — known as mobbing — is typical of certain birds during nesting season. But the convergence of location and avian purpose has turned Swoops’s ordinary blackbird life into a paparazzi-fueled exploit. He might be the only Brewer’s Blackbird with a blog and an international fan base — this year, at least.

The good news: Swoops now has a daily crowd looking out for him and his nestlings as he does his blackbird thing. The not-as-good news: a few knuckleheads have been seen antagonizing Swoops for a bit of publicity of their own. FYI: It is illegal to harass or harm these birds or their nests. 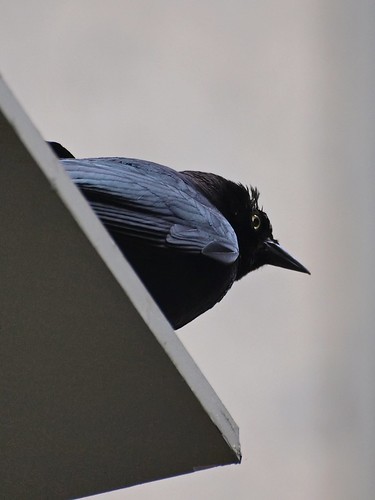 If you’ve been around active nests or ground-bound fledglings, you’ve probably been dive-bombed by a bird. We had barn swallows who nested each year in our garage. My parents left the garage door open for the season to help out the swallow parents. But, of course, the swallows didn’t realize this accommodation meant we were all bird-friendly humans. Buzzing and grazing were regular homecoming rituals for us. You can’t blame a bird for its vigilance in this mean old world.

We attended the Memorial Day celebration at the Presidio this year. The influx of people at the cemetery was utter chaos for the local blackbirds tending to their young in the path of ceremony attendees. You could almost hear the collective gasp in the trees. They regularly swooped and chattered to divert danger from their babies. We were among the last to leave and made sure that the fledglings we saw were all accounted for. It’s an amazing testament to bird survival — that nesting, fledging and growing up to be a big bird can, indeed, happen in the midst of general mayhem.

This female Brewer’s Blackbird heralded the last of the spectators as she returned to tending her nest and her single fledgling**. (Note the coloration differences between this female and Swoops, a male Brewer’s.)

** Fledglings, young birds fully feathered but still cared for by parents, should not be “rescued” unless they are injured or both parents have been killed. If a fledgling is in a path of immediate danger — cars, cats or other hazards — it’s okay to gently move the young bird to a safer spot in the nearby area. Parents will find them and continue to feed them. They do not reject their young if humans have touched them, contrary to popular belief. If you do need to exercise this type of emergency intervention — or need help with any wild animal you think might be in trouble — I posted some information and links to local wildlife orgs: Bay Area Wildlife Resouces