A Kind Turn for Local Gulls

A Kind Turn for Local Gulls

A couple of months went by and one day Hugh was coming home by way of the warehouse and said, “hey, did you see that the gull is gone? And, they put up flags on the deterrent wires?” I hadn’t seen that. But it was, in fact, true. The tenants of the building put up flashing tape and took a few other measures to deter gulls from the fate of the gull we found there months previously. I don’t see gulls loafing in that area anymore, suggesting that the new installation is working better than the old. 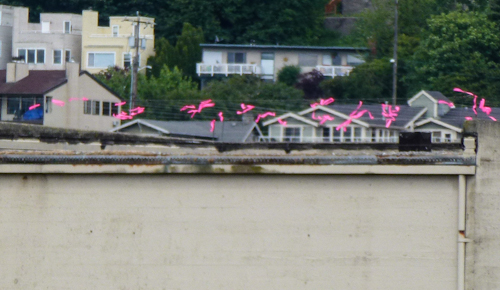 Although gulls are obviously legally protected, I’m still surprised — and always grateful — when organizations take humane action on behalf of birds that are not popular with building managers and maintenance. I’ve seen similar requests relegated to very low priority. I didn’t name the company, in the interest of discretion, but my heartfelt thanks go out to them, and to all who care enough to do even a single, kind deed for the birds.

Now, I have one more deterrent-wire situation to address, and if I can get some action on my request, I think that will take care of the worst roof wires in our neighborhood.

In general, I don’t relish posting about the issues that are difficult to witness and to address — like entanglements and injuries, and malice. I would venture that most wildlife photographers loathe coming upon these scenes, and have mixed feelings when writing about them. But I do — we do — because if a few words or photos can inspire even one person to care just a bit more, for me, the discomfort over the reality seems a small price for a tiny change of heart.