Edited to add: Originally, I posted the location of where we hiked to see the Snowy Owls. It’s fairly common knowledge around Washington, but I suffered post-blogging pangs about revealing the location of a popular species like a Snowy Owl. After chatting with a wildlife photographer I dearly respect, I’ve decided to remove those references. Last year, I witnessed the frenzy and ethical breaches surrounding the Snowy Owl irruption, and my general policy is to not reveal locations, especially of sensitive species and nesting areas. So — even though this information is probably familiar to many who come here or who live in Washington or who recognize my shots — I’ve removed the precise location of where I took these photos.

——————-
I don’t know if the verdict is in for this season of owls. Is it another irruption of Snowy Owls (eBird)? Or, an “echo” year, following an irruption? An anomaly in Snowy Owl migrations or a climate change signal that portends of more Snowies in years to come?

What I do know is that the frenzy of last year’s sightings has all but disappeared. In fact, the local birding list has just occasional mentions of Snowy Owl locations, owing to the now common sight of owls on rooftops and owls on driftwood perches.

I thought this lull might be a good time, on a weekday off, to take a hike where Snowies are known to camp out. I avoided this area last year precisely because of the rare-bird frenzy. It was also my ulterior motive to walk the threshold of the ocean , a body of water that used to be a short MUNI ride from home, but which is now a three-hour road trip and a special affair.

At dawn, the weather report said sunny with zero percent chance of rain. Good day for a beach walk and photos, I thought.

Thirty miles out, this was the vision through the windshield … all fog and frost, not a hint of sun.

A few miles away from our destination, we rounded a bend and it might as well have been a scene from Brigadoon, with clouds splitting into blue sky and ocean song. I half expected a Lerner & Loewe score as we left the fog of the road and moor behind. 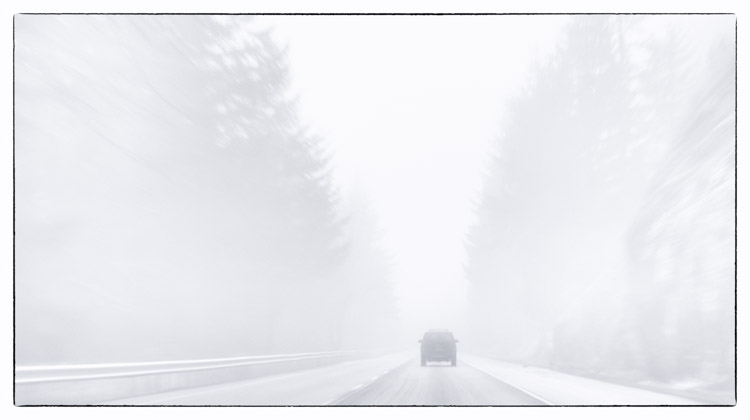 As you might be able to deduce from Hugh’s chapeau and ear flaps, it was beachy … but biting cold. 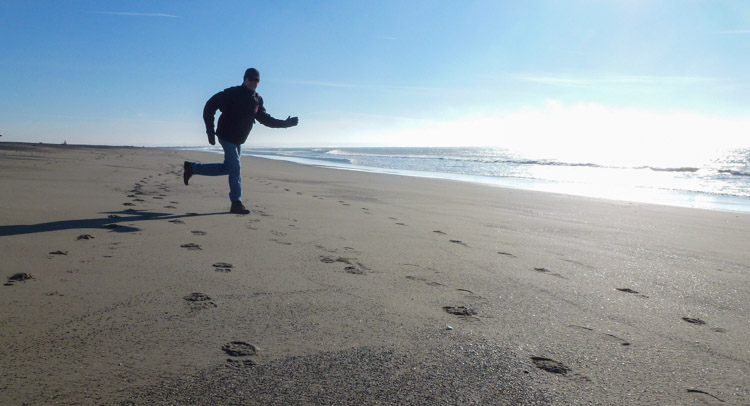 We arrived at 11:30am and walked a mile before seeing an owl hunkered down, far away, in ecru waves of grass. 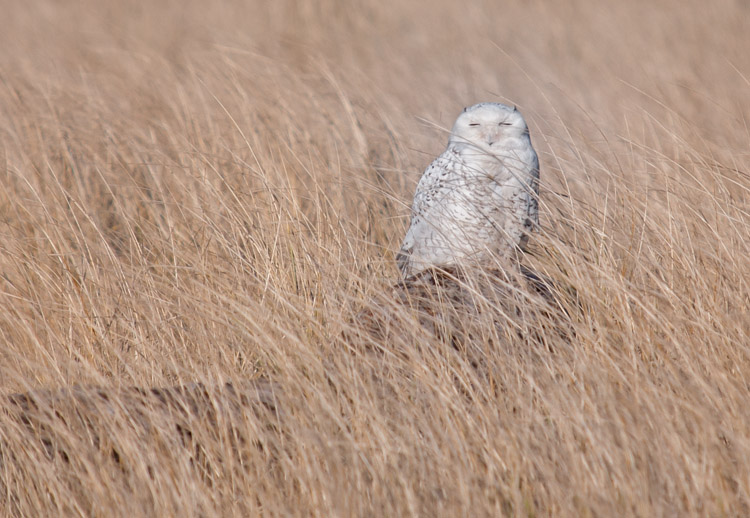 A few photographers were set up at this spot, so we opted to leave the owl alone and explore the tide line for shells and inanimate macro ops.

Along the way, I had a life-bird sighting, even though I’ve never kept anything close to a life list. A cluster of Horned Larks was foraging, almost undetectable, in the sand, their brown backs a perfect match for the substrate. It wasn’t until I got eye level with them that I noticed the coloration on their faces.

Crouching in a sand pit, I didn’t see Hugh signaling to me. The larks suddenly flushed … and I saw why. A Snowy Owl glided right above my head and toward a distant nub of driftwood. Hugh had seen the owl come over the trees and swoop toward the birds and he was trying, silently, to clue me into a photo op. I failed the teamwork method a few times on this excursion. I had a series of similar photo misses.

I know an owl in flight is a coveted shot, so much so that some people live-bait or lure owls for photos. Those are practices I will never engage. The way I rationalize my lack of in-flight shots from Ocean Shores — despite several opportunities — is by telling myself that a sitting, preening owl is possibly content, whereas the flying owls I missed might have been flushed owls from another location. 🙂

We meandered the trails of the spit just for fun, and it wasn’t until we were on our way back to the car that Snowy Owls started showing up, materializing instantly and magically on driftwood logs like Endora from Bewitched.

We were told the owls might huddle lower on windy days, rising up to their perches as the sun warms the afternoon. We sat distant on the frigid sand, watching their eyes catch the glint off the water. There were just a few photographers milling about, and all seemed conscientious of the human-owl ethics barrier. Accidental interaction occurs because of the trails that wend through the grassland areas. Once in a while, someone comes upon an owl without noticing — and is literally on top of the owl before he realizes it. One such incident is pictured here. The owl sussed out the situation with the wayward human, then resumed preening. 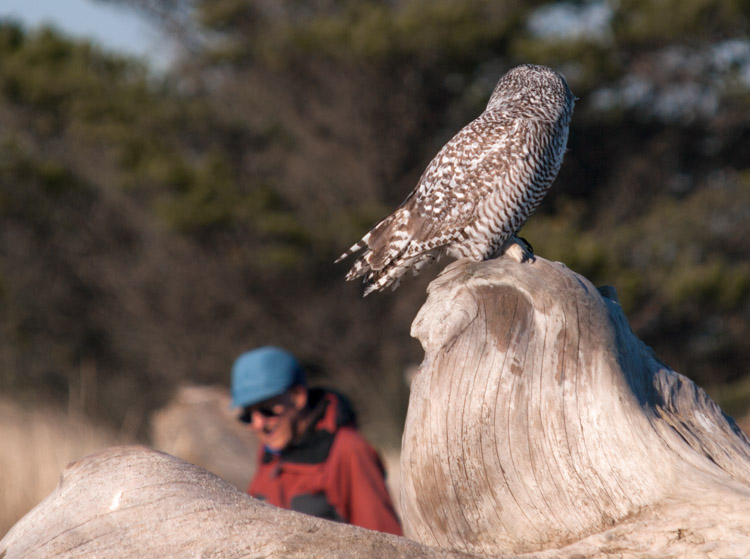 My favorite of the shots below is the Snowy Owl fluffed like a powder puff, ruffling feathers during a preening session. I call that one “Shake a Tail Feather.”

Thanks, John, for the inspiration to finally make it out there … for the owls and for a therapeutic winter hike. 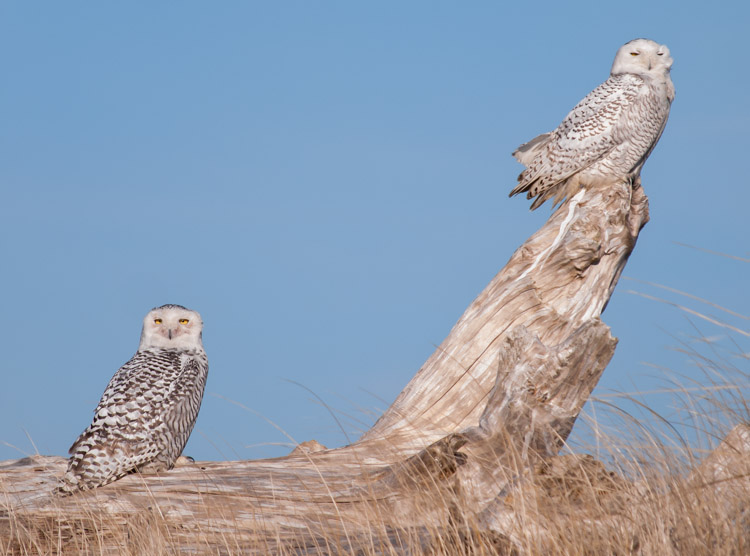 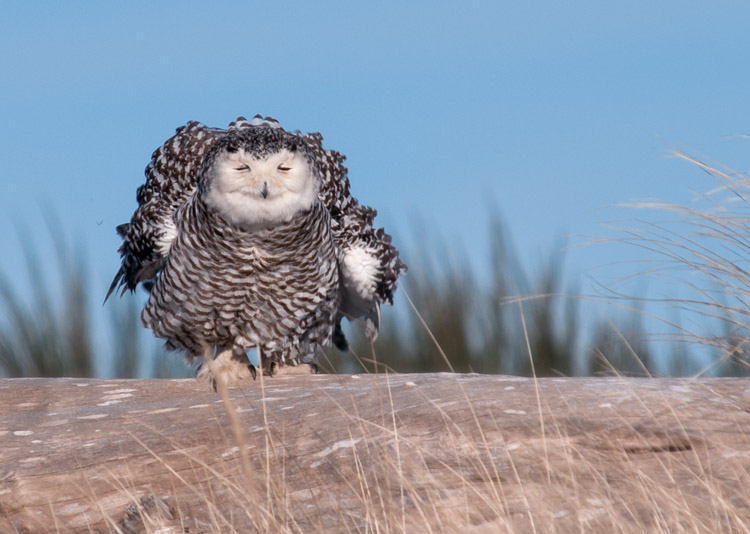 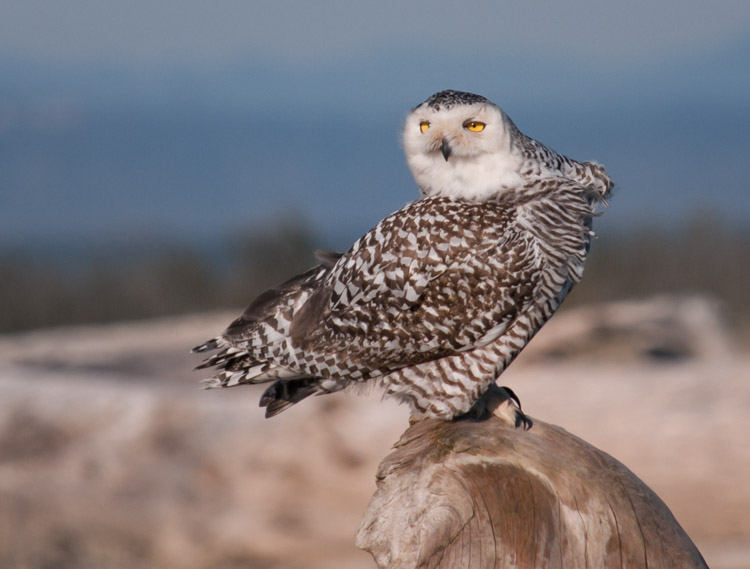 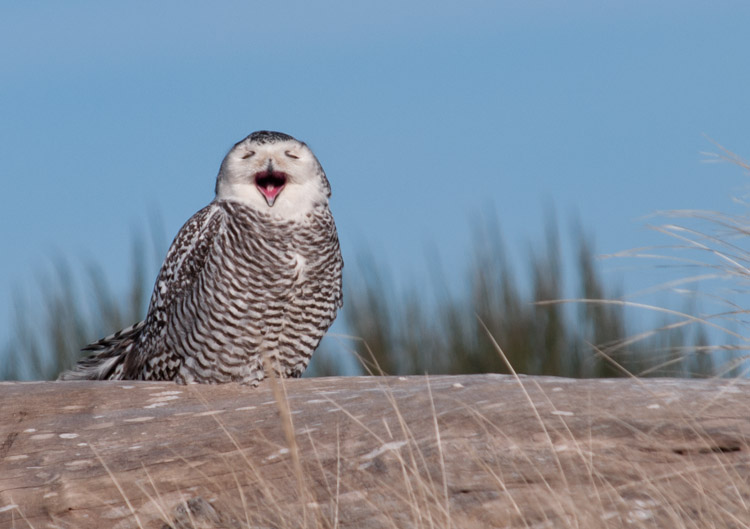 From the movie, What’s Love Got to Do With It