I’ve heard it in the chillest land –
And on the strangest Sea –
Yet, never, in Extremity,
It asked a crumb — of Me.

Here’s a routine that’s caused me a thousand arrhythmias in the past few days:

Scores of American Robins descend on berry shrubs that line the main route through our neighborhood. The robins cram as many berries as possible into their crops. And then, whenever a truck, bus or SUV rumbles toward the shrubs, they flush right into the road, right in the path of the vehicles over-driving the speed limit. The birds do this all at once … so the scene is one of chaos … of robins banking left right and every which way as they use updrafts to [barely] avoid the vehicles.

[Note the background sound of a truck on approach, as the robin in this video ditches out.]

To photograph these robins, I’ve been using my car as a blind, parked across the street from a stand of what I believe are pyracantha berries. Last year, I shot my robin-berry images after a snowstorm when people were sledding, not driving. This year, it’s become a harrowing event for a bird lover like myself, so much so that I stopped shooting and kept vigil for a while, making sure none of the robins were hit or injured. A few robins got a light grazing before swinging up to the trees to recover. Noting those incidents, Hugh and I now comb the area at the end of each day to make sure there’s no one left behind with an injury. 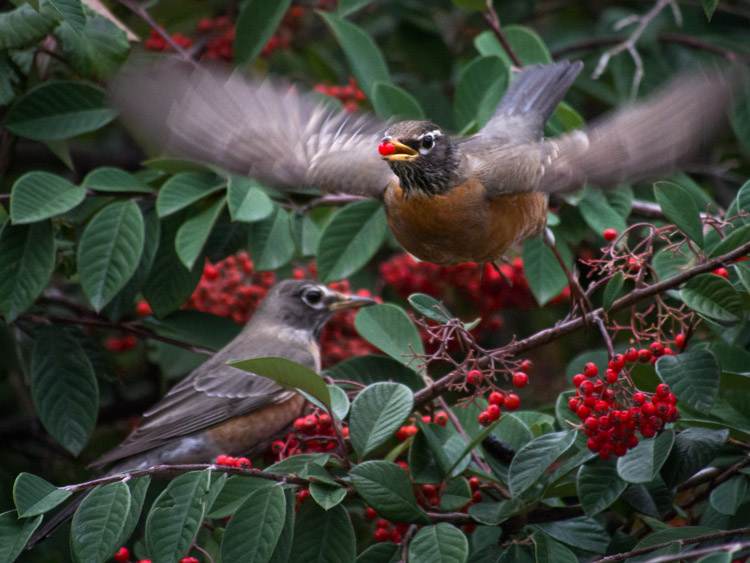 Road hazards notwithstanding, I love the bird-berry rituals each winter. In Oakland, it was the Cedar Waxwings who heralded the official start of winter when they raided our holly and pyracantha trees. Here, it’s huge flocks of American Robins, interspersed with Starlings and an occasional Cedar Waxwing. It’s the joy I perceive in these frenzies that draws me in. It looks like bird bliss when they discover these troves of red treasures. 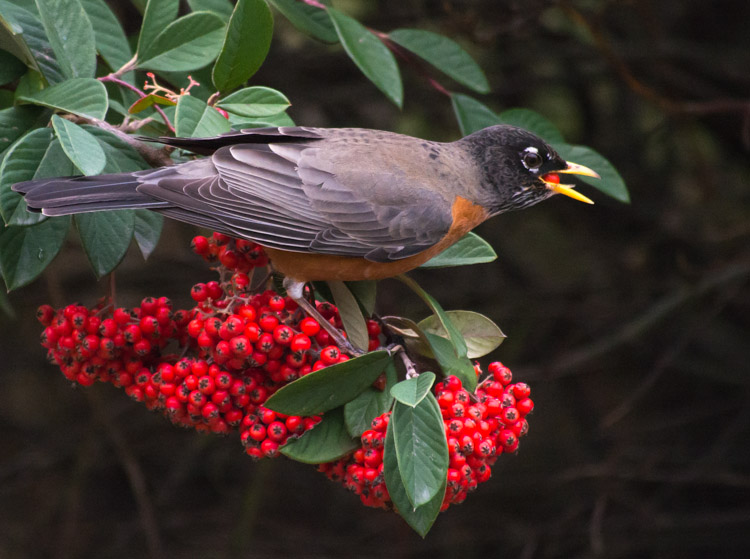 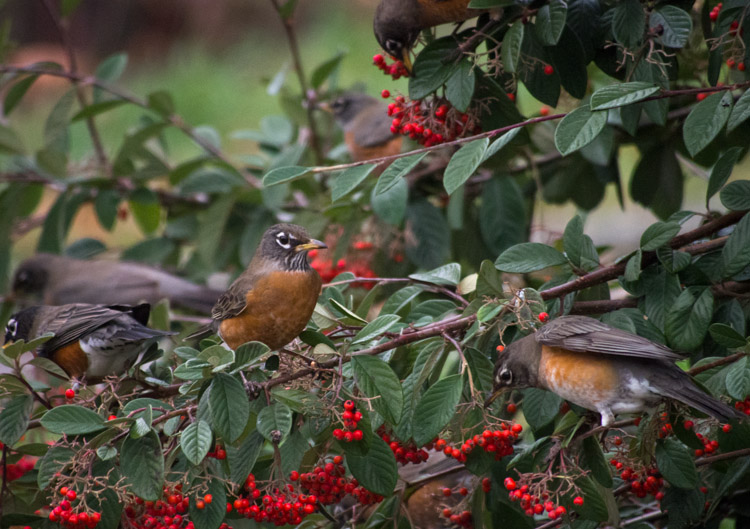 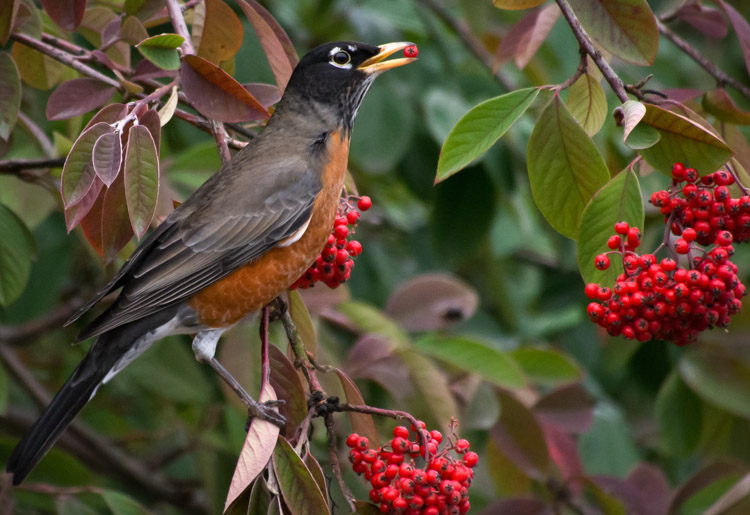 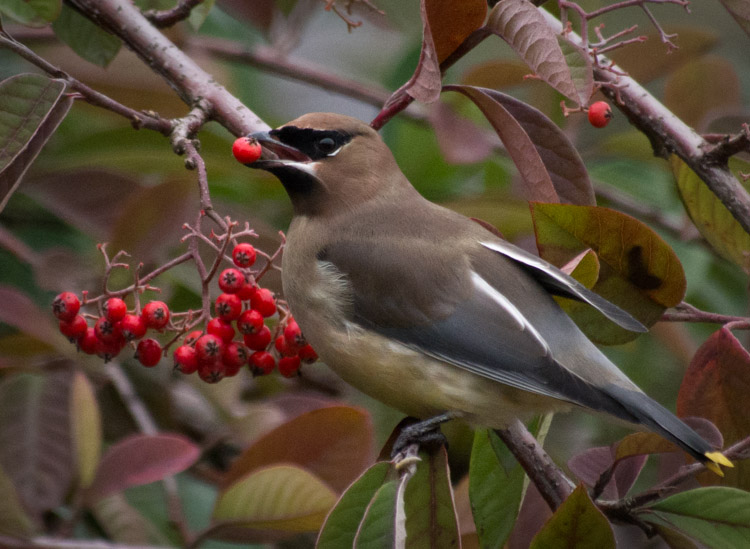 The main diet for wintering robins is fruit-based. Berries like pyracantha, hawthorn, holly, and juniper meet digestive juices in the stomach’s proventriculus at the front end, then transport their seeds through the bird’s system for deposit and germination later. 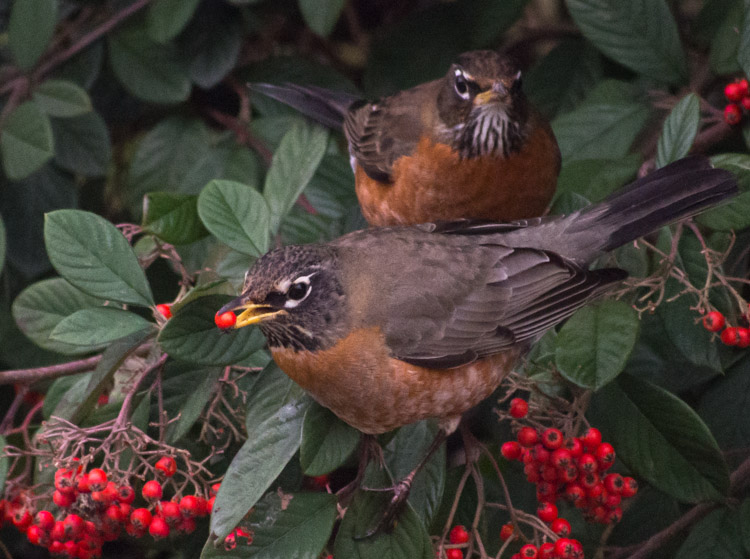 Once the soil thaws in the north, bringing worms up from their wintering burrows, American Robins signal spring as they follow migrations northward along the 37 degree isotherm (that is, zones where the average temperature is 37 degrees F). They exploit the snow melts and rains which flood the worm holes and bring their spring and summer protein sources to the surface.

Then, throughout spring they feed their youngsters insects, worms and other small invertebrates … until autumn when the soil grows cold and impenetrable again. Next year, as every year, January will bring flocks of American Robins scanning the neighborhood for the red nourishment that ripens on the same timetable that drives their own travels and toils.

These photos were shot with the Olympus OM-D E-M5 and a Lumix 100-300mm lens. The days have been dark so the ISO on many of these images is 2000+, with a bit of NR applied in post processing. 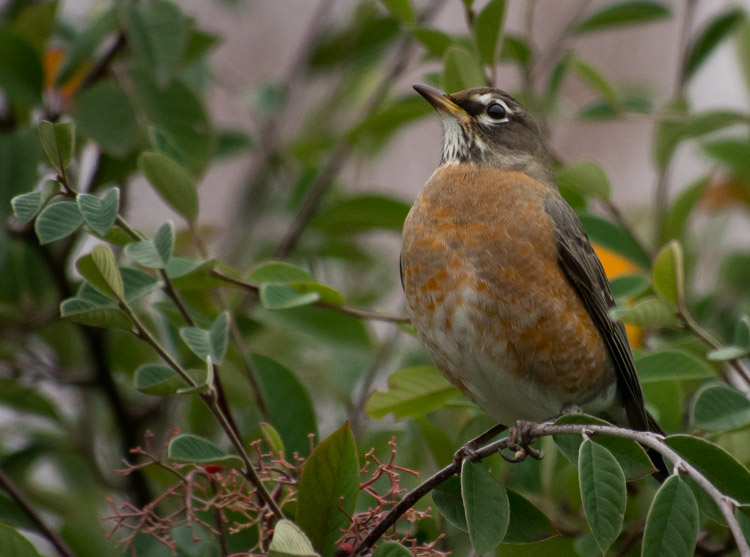