With starlings, I am often an outlier, even among people who share my conservation ethics and love for wildlife. That’s because I appreciate starlings in a way that defies conventional dislike for the species in the United States. I wrote about this in a 2009 post about European Starlings and their introduction to the U.S. in the late 19th century:

“Starlings are related to Mynahs, both in the family Sturnidae. They’re exceptional mimics. In a 2007 piece in the New York Times, Jonathan Rosen mentions Mozart’s pet starling who could ‘sing a few bars of his piano concerto in G major.’ Another New York Times piece cites a study done with starlings where they were able to recognize sophisticated language patterns, a capability previously not recognized by scientists.

For all their innate brilliance, however, starlings are much maligned for their invasive status — the fact that they were introduced, grew and survived in such numbers. They’ve been blamed for everything from songbird decline to massive crop destruction. Despite nearly every human effort to eradicate starlings, they bounce back in healthy numbers.”

I cited a 2003 study by Walter D. Koenig in Conservation Biology (vol. 17) where he concluded that …

“… these results call into question our ability to predict the effects of exotic species on native species. Despite their rapid spread, striking abundance, and aggressive nature, starlings appear thus far to have had little negative affect on the native cavity-nesting bird species with which they are known to interfere.”

For me, those elements cast reasonable doubt on the overarching criminal guilt of starlings. I understand the complexity of their ecological interaction, but I don’t condemn them, particularly in the face of  greater environmental sins by humans.

Starlings are common residents in my city landscape. In appearance they are kaleidoscopic, polychromatic, iridescent, resplendent. In song, they are whistles, chants, murmurs and twitters. Every spring, they find ways to reconfigure urban structures into sanctuaries for their nests — structures like this corrugated metal framework. 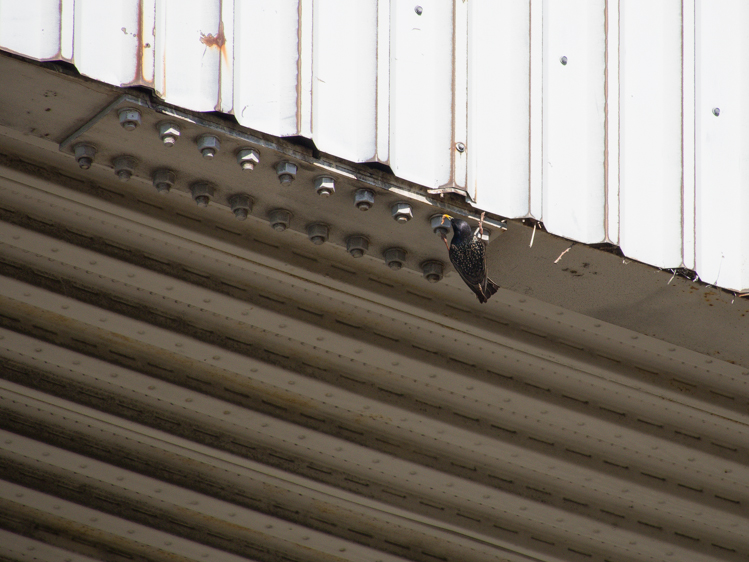 They comb the nearby grasses and low tides for grubs, beetles, marine worms, and mollusks to nourish their nestlings with a high protein mix. 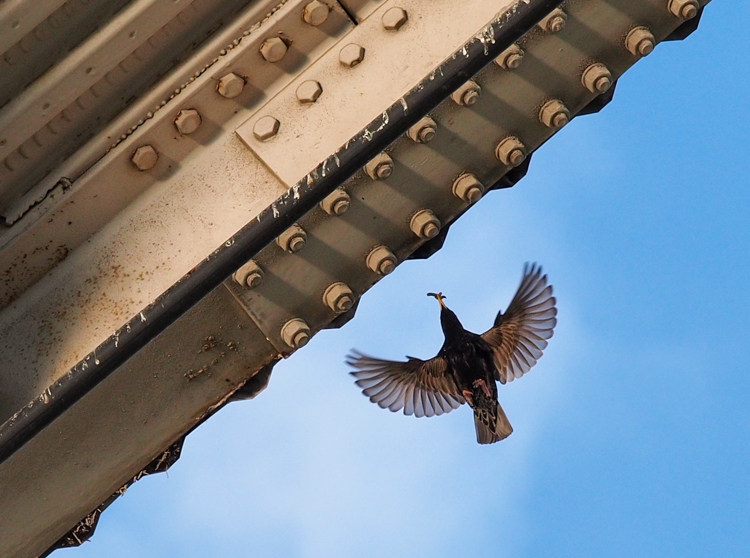 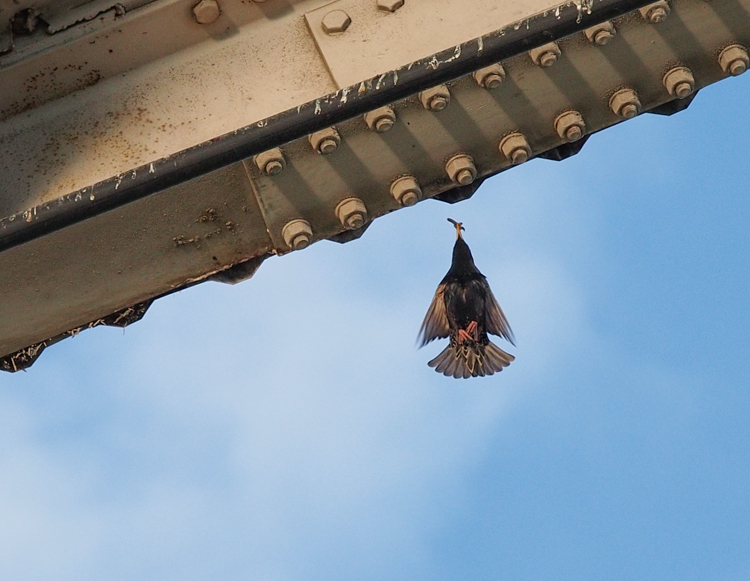 Last year, as fledging time drew near, I’d zoom in and see these faces reaching for a parent’s familiar beak. 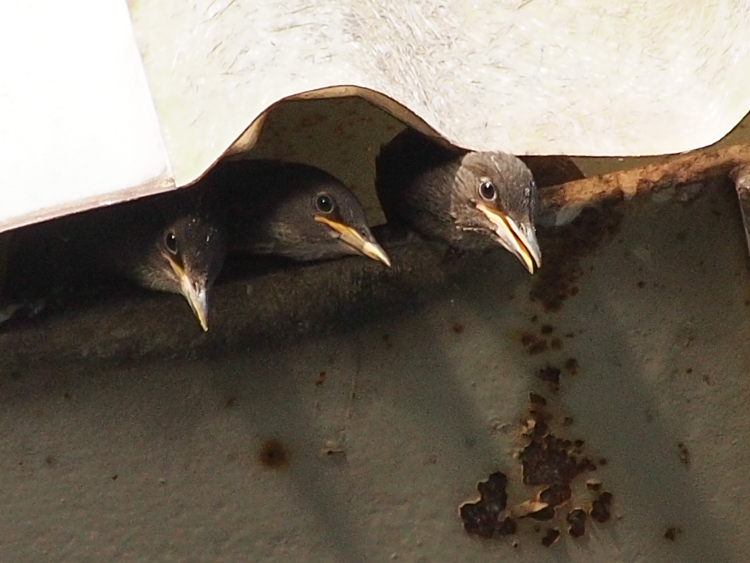 The parent birds brought meal after meal in short succession, as do all good avian parents. They’d hover within reach of their nestlings and deliver the goods. 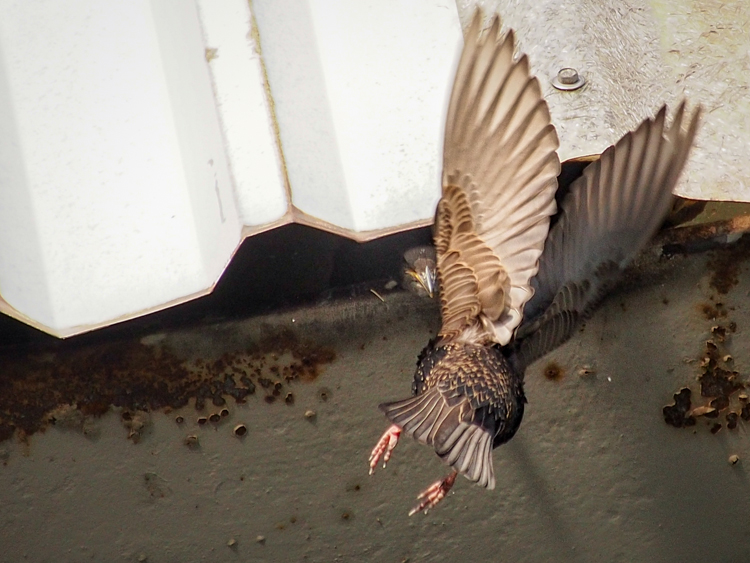 A few days ago, I stopped by this location and snapped a few more images. When I looked more closely at home, I noticed that the parent starling in one of the photographs adopted a clever means of clinging to the bolts and nesting twigs as a way to stabilize herself for entry into the nest. Be sure to click on the full-sized image to take a look at the footwork. Click once to enlarge, then one more time to expand full size.

This year’s group hasn’t fledged yet — but last year, they emerged from their cubbies with such exuberance, we named them the Class of 2012. They were the excited youngsters of both starlings and crows who got their spring wings and understanding of freedom. 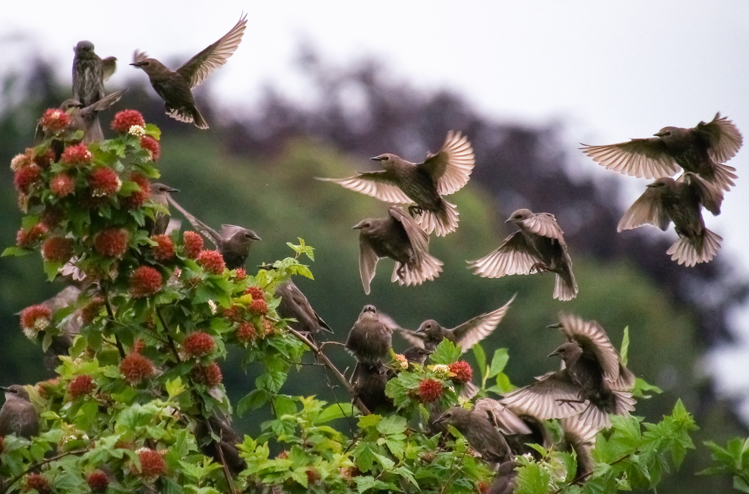 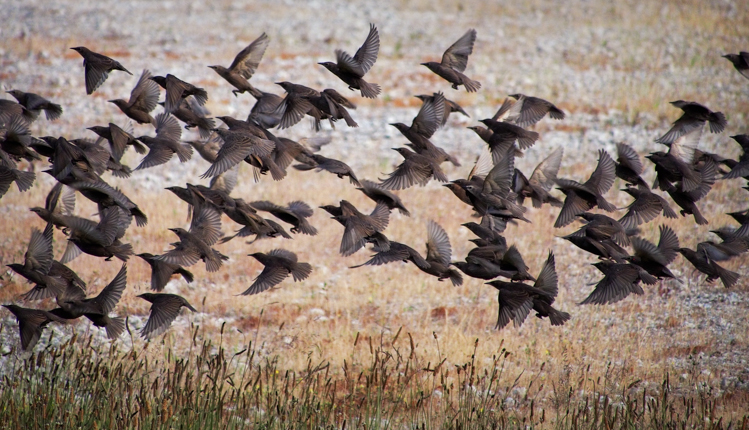 Later in the season, I came upon a flock in the same area — adults and juveniles, transitional plumage emerging, all sharing a few big puddles after a September deluge. 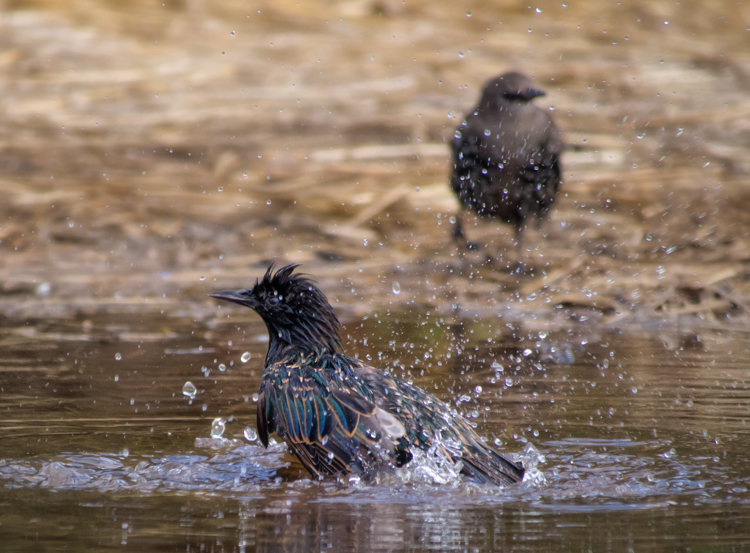 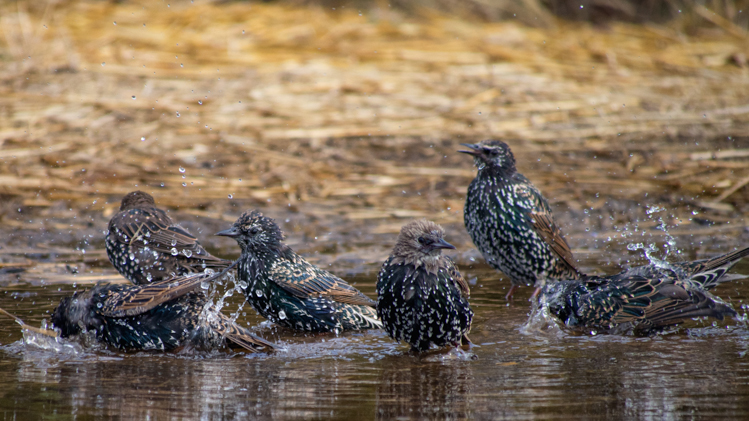 At this phase of feathering, youngsters acquire their spots and adults move away from their sleek breeding plumage toward their own spots, which will characterize their non-breeding months. 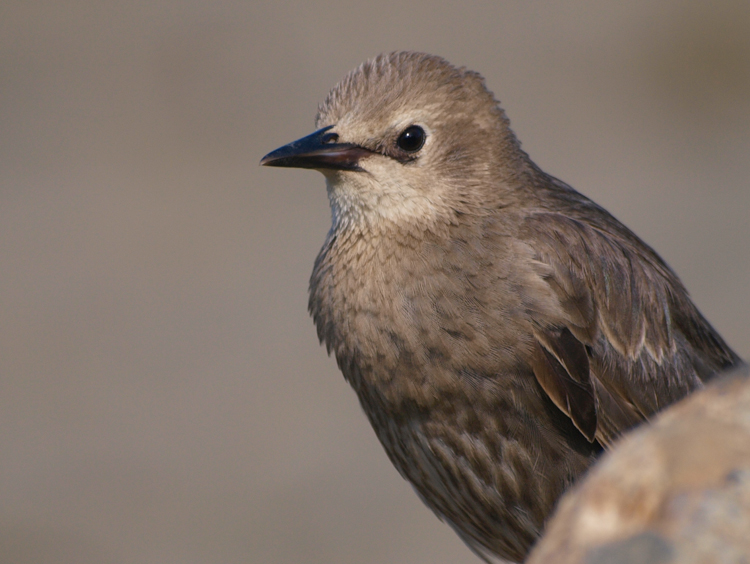 I’m looking forward to the Class of 2013. There are fewer nests this year. I wonder if some of them were destroyed. People do all manner of things to Starlings and their nests because they can — the birds have no legal protection. This month and next will show the outcome of the Starling parents’ toil, and I hope to be photographing a few flyovers once the new babies get their own wings.

One parting note for people who are still on the fence about starlings and other non-native species, from the New York Times: Noble Eagles, Nasty Pigeons, Biased Humans

We always have a story to justify our most aggressive attempts at unwanted-animal control. The animal is an invasive species like the European starling, and it doesn’t belong here. Or it’s a native species like the cowbird but its range has been unnaturally extended through deforestation. Or it likes our garbage and our raggedy parks and thus has an unfair advantage over fussier creatures. Whatever the self-exculpatory particulars, said Marc Bekoff, author of The Emotional Lives of Animals and emeritus professor of biology at the University of Colorado, ‘I see it as a double cross that we create a situation where cowbirds spread, or red foxes eat endangered birds, and then we decide, well, now we’ve got to go out and kill the cowbirds and the foxes.’”