This isn’t the first time I’ve seen an Osprey napping with a fish in his talons. Last year, while observing the platform way across Seattle’s long-abused-but-recovering Duwamish River I watched a male Osprey land on a utility pole, clutching a half-eaten meal. A crow who’d been tailing the Osprey, landed alongside. The Osprey perched, adjusted — then appeared to doze off. The crow who’d been haranguing him for some leftovers seemed to be in the same frame of mind. He nodded off, with nictitating membrane covering the eye as the Oprey’s eyelids also drooped shut. 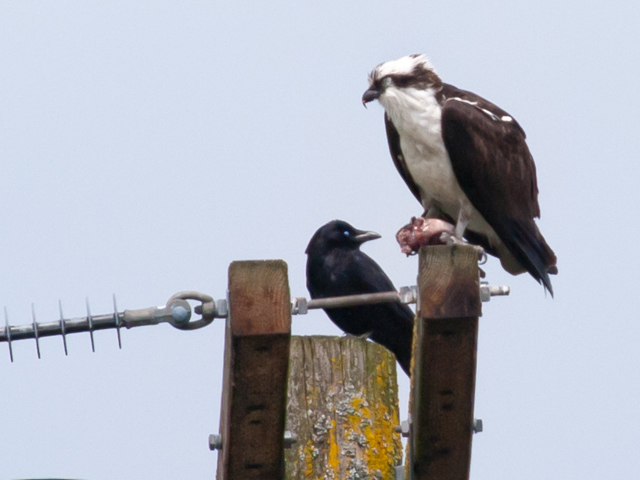 The Osprey’s mate called out to no avail as he dozed off. 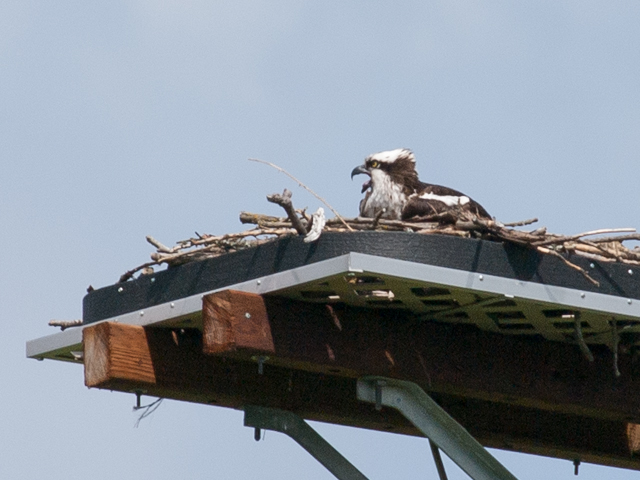 I was curious about how long he would stay in that position, so I planted myself on the pavement of a walking trail across the river. After 15 minutes of repose, the Osprey finally woke up and flew the fish over to his girl. She flapped to the perch above the nest and ate her share of the meal. 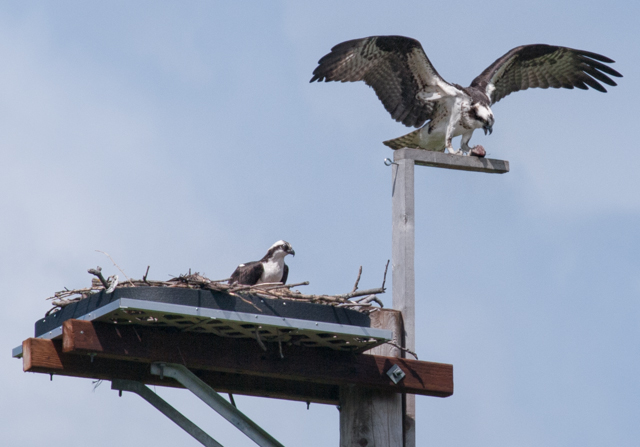 A few days ago, I stopped by one of our local Osprey nesting platforms to check on the progress of the eggs and incubation — trying to discern if any chicks were present. I saw the female perched above the nest, calling out to her phantom mate. She sees him long before I do, so when I hear her distinctive, sharp messages[1], I know he’ll be circling within a few minutes. 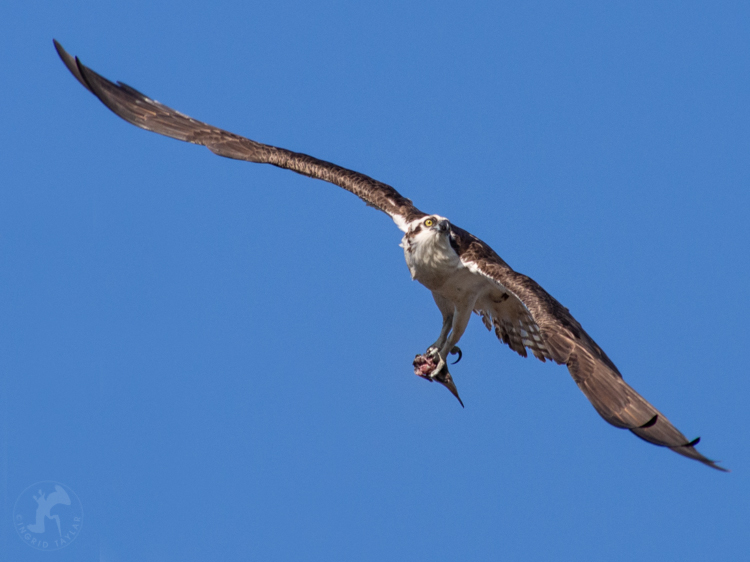 When the male appeared, he didn’t stop at the nest to drop off the food, as he often does. He retreated to the working railroad bridge, adjacent to the nesting platform. 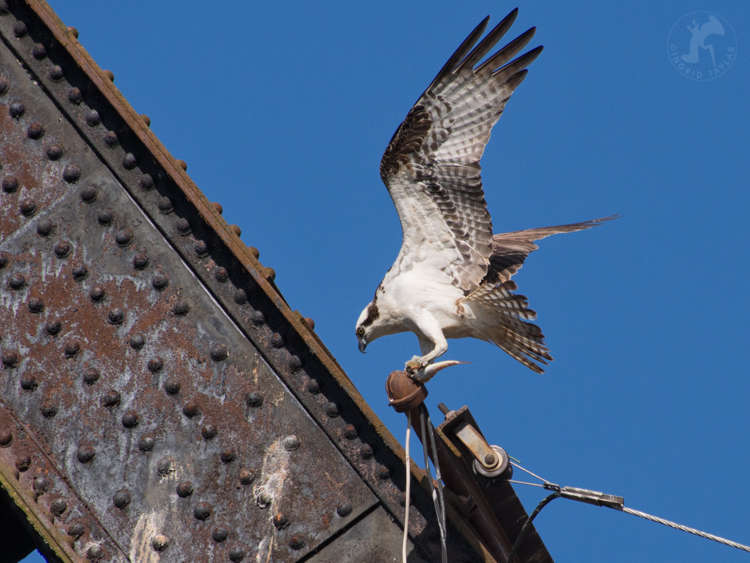 Then, after making a few comfort adjustments … … just like the Duwamish Osprey, he appeared to doze off, talons wrapped around the partly-eaten fish. (Ospreys have barb-like structures on their feet called spicules which, along with the clasp of the talons, will ensure a tight grip on their catch.) 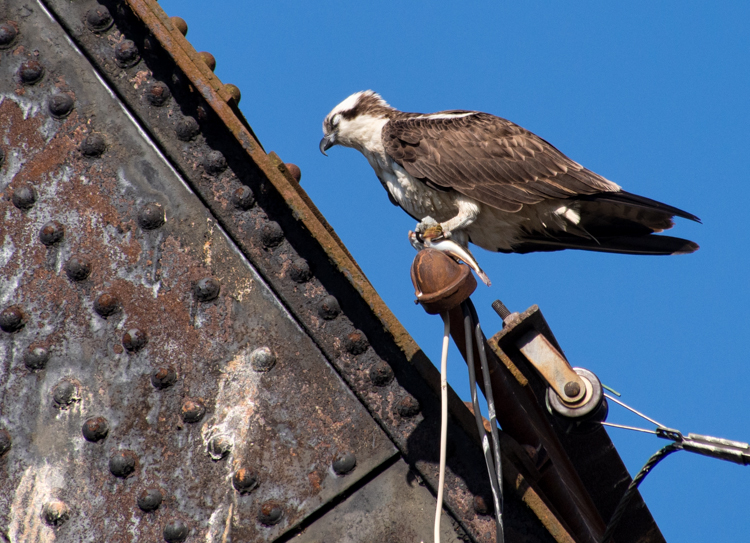 He stayed fixed in that position, barely opening his eyes even when the commuter train rumbled below his perch.

His mate regularly called out from the platform. She was stuck — incubating, hungry. And there he was, sleeping with a fish on the railroad bridge. I got her point. 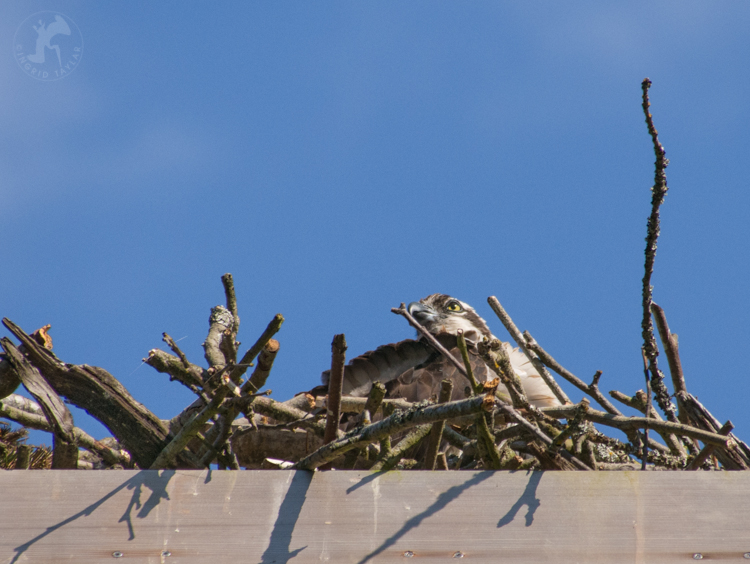 I took a seat on the park bench, just to see how long he’d sit with the fish. Finally, after 20 minutes or so, he roused himself from slumber, and got to the business of eating.

When his mate called out one more time, he did a quick twist of the neck, away from the fish and toward her … as if he were hearing her for the first time. He took a few more bites, then flew over to her with the rest of the catch. 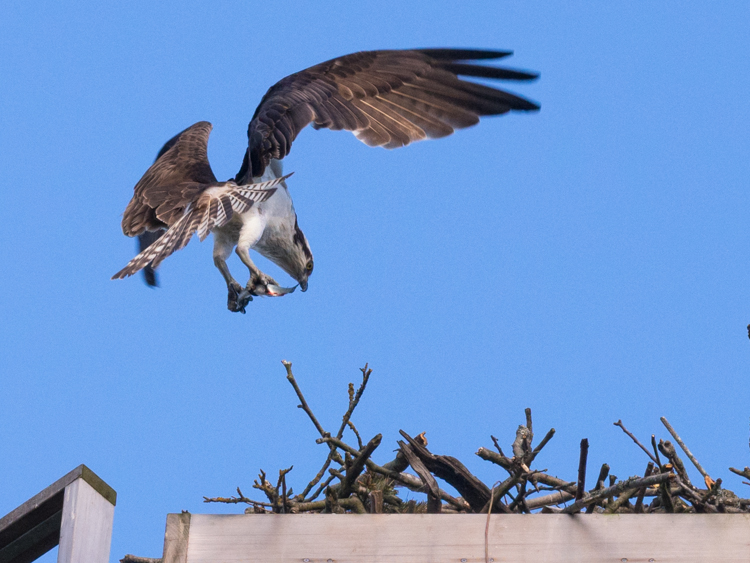 So, is what I’m seeing post-fishing fatigue? Or am I misinterpreting another behavior? I’ve looked for substantiation of “osprey • sleeping • fish” but haven’t found comparable events. I did read this, in a study Energetic Expenditure of Male Ospreys Provisioning Natural and Manipulated Broods (David J. Green & Ronald C. Ydenberg):

Male Ospreys provisioning nestlings in this study spent only 1.34h/day flight-hunting and were inactive for approximately 13 of the 16 hours of daylight. …The longest a male was observed to flight hunt during 82 days of observation was 4.7 hours, 31 percent of the active day.”

The study goes on to say that males didn’t appear to either increase their food delivery nor decrease their food intake, even as their brood size increased, whereas females “have been found to reduce their food consumption and suffer increased mass loss when provisioning experimentally enlarged broods.”

So what’s going on with these dozey boys? Is the act of fishing so intensive a sprint for the male that he requires a post-catch rest period? And does he remain away from the nest to ensure he gets his share of nutrition and energy? Is it just a natural part of those 13-to-16 hours spent resting, outside of active foraging? If you know, I’d like to know.

[1]I’ve wondered if some of the chirps used at pedestrian crossing signals were based on the Osprey call. Some of those sounds are developed so as to distinguish the crossing signal from the calls of nearby chirping birds. In some places, the report is a definite, two-syllable “cuckoo.” But the single, shrill beebs at some lights always make me think “Osprey.”