Note: I use male/female pronouns for wild animals even when I can’t discern the sex. I don’t like to depersonalize a living being as an “it.” In this case, I did not know the sex of this gull.

In my previous post, I mentioned a Western Gull I managed to rescue … by true luck. Here’s that story.

We were in Los Angeles all of January and part of February, and in the context of a chaotic month, I stole an hour to go strolling on the beach.

On my walk over through Redondo Beach, I saw two Black Phoebes (Sayornis nigricans), one who preferred automobile side mirrors as perches. She’d flutter down for an insect grab, then return to her station. 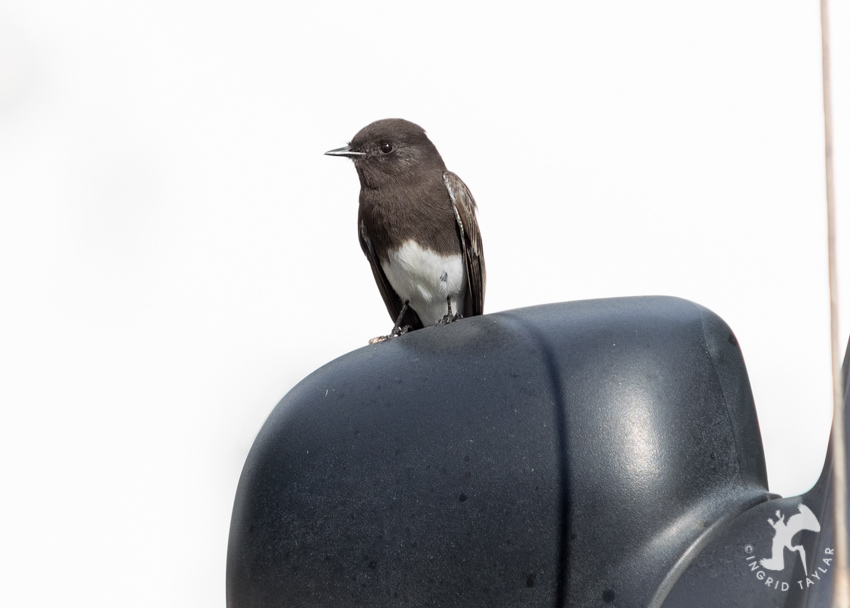 The other phoebe preferred signs and posts. 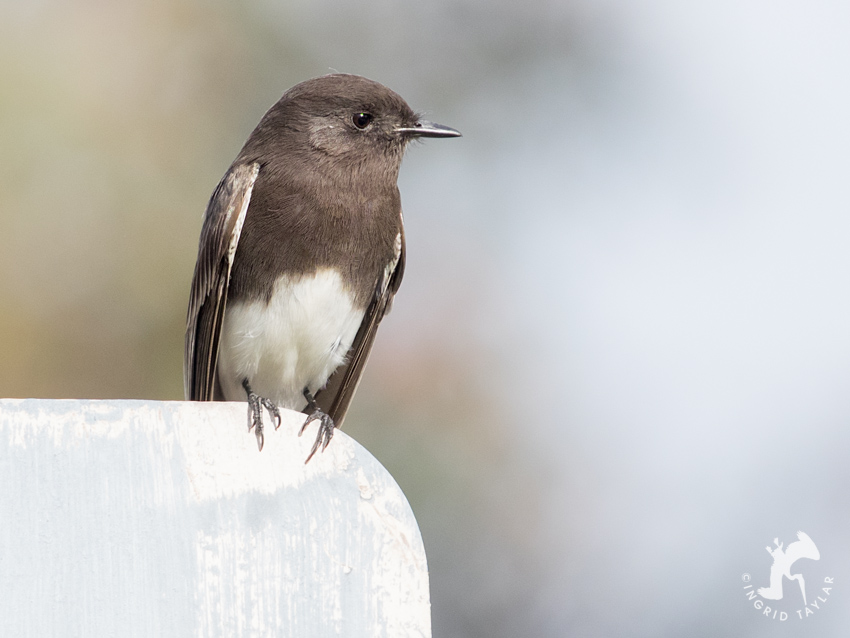 Black Phoebes love water environments so I wasn’t surprised to see these two just blocks from the Pacific. Their methodology is to perch, as pictured here, then snatch their insect prey on the ground or from the air.

I left the phoebes to their business and hopped down some stairs to the sand — getting my first whiff of briny air and my first earful of the surf, tumbling on shore like crash cymbals. Home! Happy. I dropped to my belly to photograph a few of the Heermann’s gulls, sitting zazen in their formal blacks and whites. 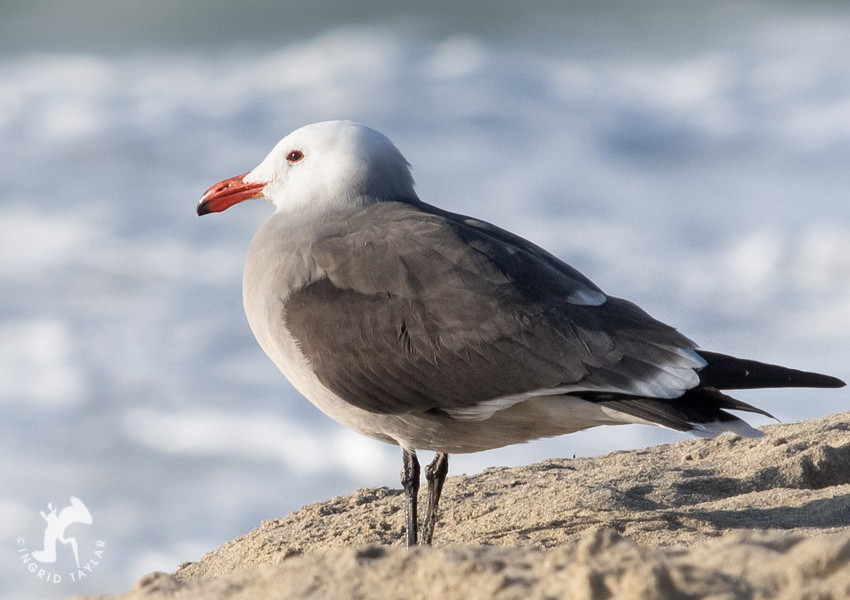 I scanned the flock to see which other gull species were loafing on the beach, and that’s when I saw it … that thing I don’t want to see but which I often encounter. It was an anomalous shape in my periphery, something clearly out of sorts. When you photograph the “normal,” the eye gets trained to see the abnormal on the tableau. In this case, it was a gull, sitting away from his flock mates, lying neck deep in a sand divot. A Redondo Beach patrol vehicle passed within feet and the gull didn’t even move.

I ran over to check on the bird. The truck tracks missed him by a tire’s width or two. He looked bedraggled and ill, and I knew he needed help. But, capturing a bird like this, by myself, without rescue gear is always a challenge if he can run and fly. The only tools I had on me were my jacket and a pair of scissors I threw in my camera bag at the last minute … just in case. I almost always find fishing line on beaches and bring scissors to cut it up.

My plan was to slowly sidle up to the bird and see how close I could get, throw my jacket over him and quickly grab him in a body lock. As soon as I got within jacket-tossing distance though, he got up and moved just out of reach, eyeing me constantly, obviously not wanting me close. I didn’t want to stress him, so I backed off to observe from a distance. After a few minutes, the gull decided to join his flock, skimming the sand in a compromised flight pattern.

As he stood on the high berm with his mates, I felt better that he was safe from beach patrol vehicles. I decided to stay close by to see if another chance at capture might present itself. I snapped this photo which revealed to me the problem: fishing monofilament, sadly, not a surprise in this fishing-intensive area and pier. 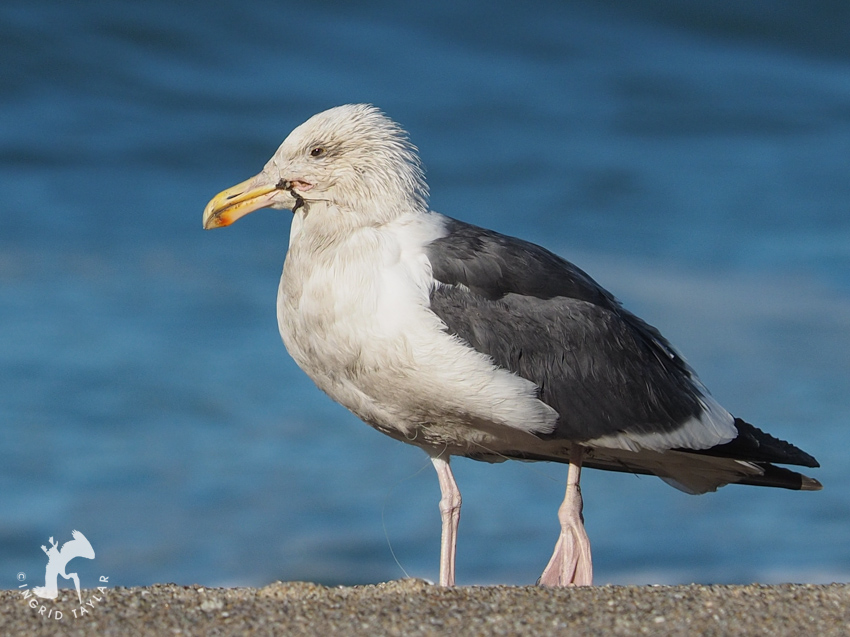 The fishing line was wrapped around the base of his bill and also trailing from his feet. It looked to be stuck under his wing, as well. 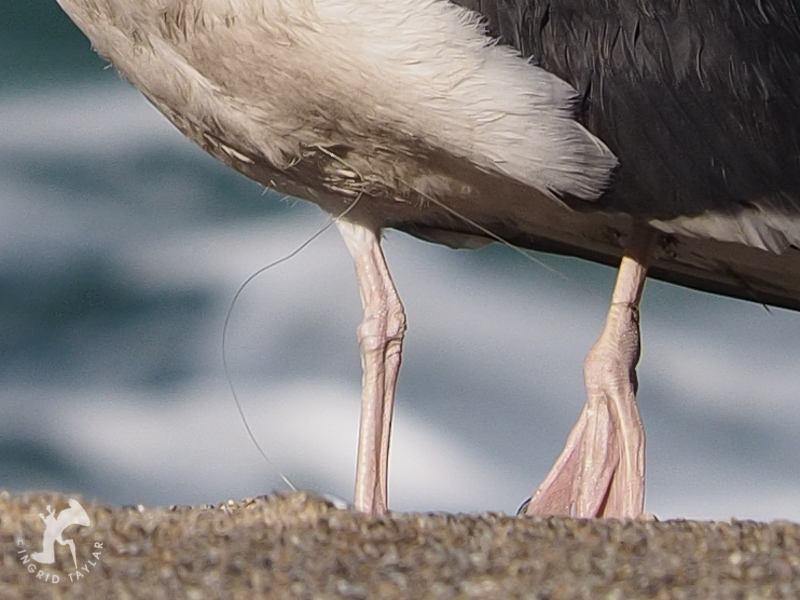 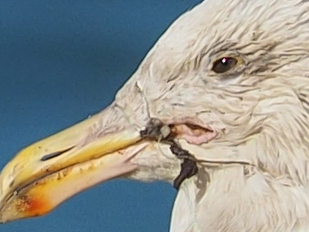 As the gull shut his eyes, resting, I turned away for just a moment to snap this shot of a Willet (Tringa semipalmata) skipping through the surf, hunting for crustaceans and worms. 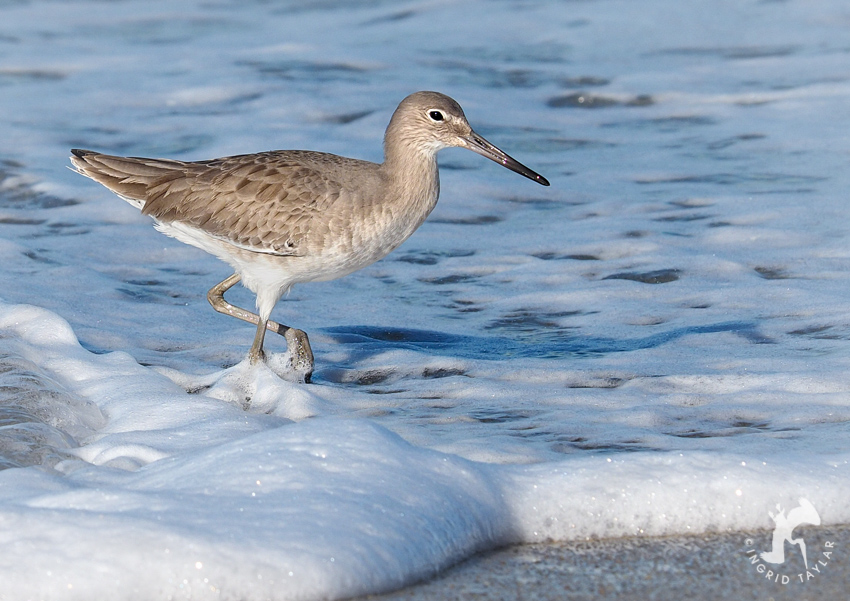 It seemed like a mere instant that I looked away, but when I turned back I caught a near calamity out of the corner of my eye. A white shape was bobbing in the surf and I knew instantly it was him. He must have been taken out by a particularly big wave, and was so debilitated, he was bobbing in the water like a marionette.

I had no time to stash my camera, I just slung it on my back like a messenger bag and ran over to the location. It looked hopeless. I had just a split second to figure it out when, in a move I couldn’t believe — one serendipitous gesture by nature — a huge wave pushed the gull back toward the beach. He was flattened against the sand and struggling as the undertow pulled him back. But, it was just enough time for me to grab him around the wings and tuck them against his side. As I did so, my camera swung around my back and it was just an instinctive block by my elbow that kept it from becoming a lethal device.

I emerged from the surf like the creature from the bog, me and the discombobulated gull, soaked, salty and sandy. I wandered over to the boardwalk and rested for a minute, pondering my next move. I was unprepared, except for the scissors in my bag which I couldn’t reach without losing a grip on the gull.

This gull must have had a guardian angel because just as we sat down, a woman came up, saw the situation. I asked if she’d ever cut monofilament off a bird before. She had. She was a veterinarian. She found my scissors and snapped the fishing line off the gull’s bill first, then discovered that same line was also wrapped around his neck. At this point the poor bird regurgitated on me.

The vet next clipped the line around the gull’s legs, discovering the worst part: a hook deeply embedded in his foot. From this hook the line twisted around his legs and then like a tourniquet around his wing joint. The wing was not broken or visibly damaged, thankfully. But she found another hook embedded underneath the wing. The next step was getting him to a wildlife rehab where the hooks could be removed with anesthetic.

We had several blocks to walk to my car, so this was our routine for the next many minutes, waiting at stoplights, gull reaching out to find another place to bite me. The bites don’t hurt that much unless they get your face — an injury I was trained to avoid. I snapped this with my iPhone, the Western Gull tucked in my jacket having knocked the hood off once again. 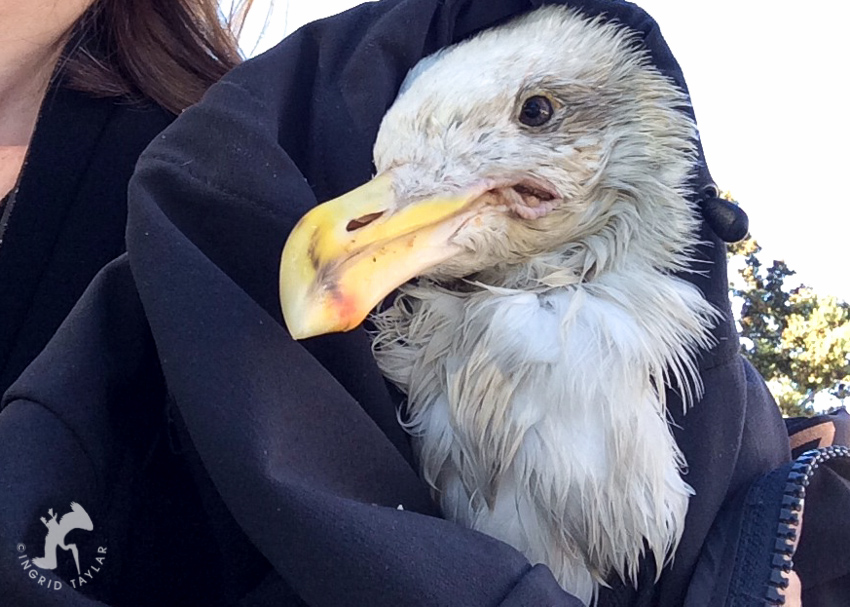 In another stroke of good fortune, International Bird Rescue had a hospital in San Pedro, about a half hour from where I was. They handle seabirds and gulls. So, after getting the gull into a carrier (I keep a portable one in my car), this Western Gull was finally on the road, literally, to healing. I was never so glad to be in the good hands of professional rehabilitators.

My wildlife skills have a serious limit, I was a part-time volunteer. So, like everyone else, I rely on the medical expertise of places like International Bird Rescue when situations like this arise. So often, wild animals go without this type of aid because there is nowhere to take them.

If you have a wildlife center near you, please consider donating. They rely on public support for these types of cases. When you see the effort that goes into rescuing or rehabilitating one small gull, it’s monumental what these organizations accomplish across species, time and circumstance. If you don’t have a wildlife rescue near you, you can make donations to facilities like International Bird Rescue or the Marine Mammal Center, among other organizations.  Those are two of our west coast wildlife orgs. Their reach goes far beyond the local and into global disaster situations like oil spills.

On a related note …

My fellow blogger and colleague at the Wildlife Conservation Stamp Project, Larry Jordan, wrote a fantastic, illustrated piece on International Bird Rescue and the work they do. That piece is here:

Disclaimer: I have put in volunteer time at International Bird Rescue during a spill event, so I’ve had some personal affiliation.