… at Lake Merritt in Oakland, California

I originally named this portrait “Standing Room Only.” I’d never seen a Black-crowned Night Heron (Nycticorax nycticorax) creep chest-high into a pool — then just stand there forever like a Japanese snow monkey. This pose made me laugh as I watched the heron soak up the swirls of his own private day spa. One of my Facebook friends wrote, “what is this lil man doing?” That comment captured the humor I saw in this stance. What *was* he doing? 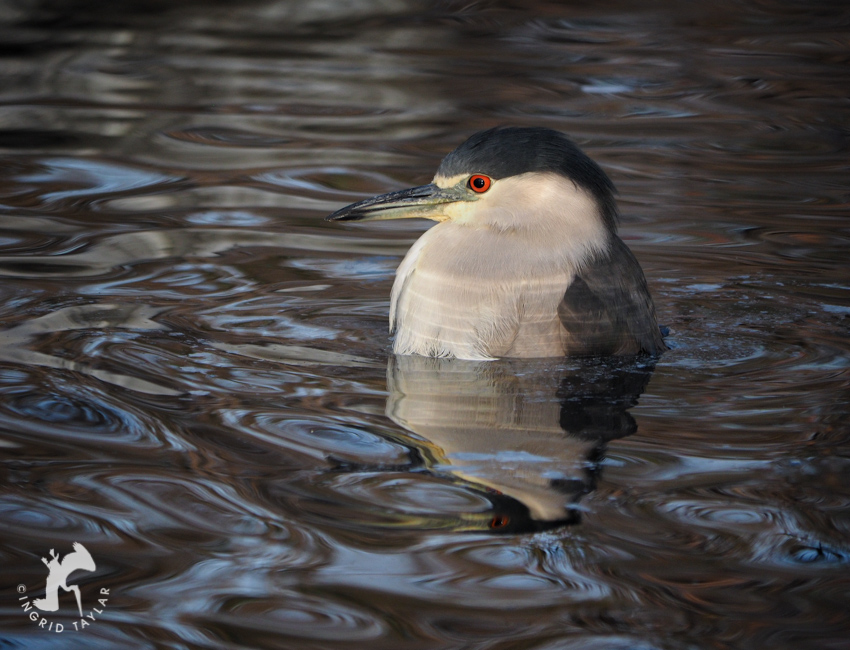 When I first saw him creep into the ripples, I thought his intent was to bathe or fish.

He stood for a time, reflected in his own stillness as the ripples turned to velvet. 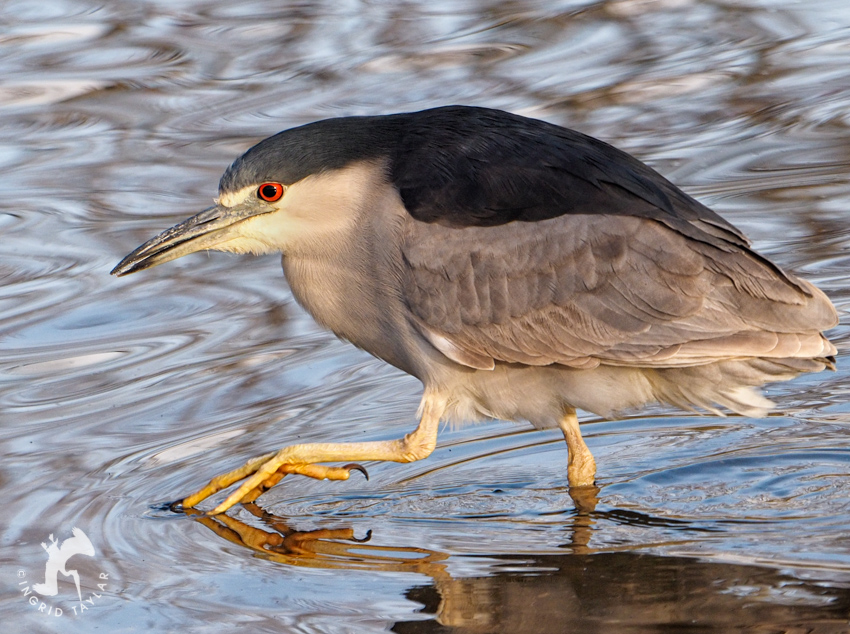 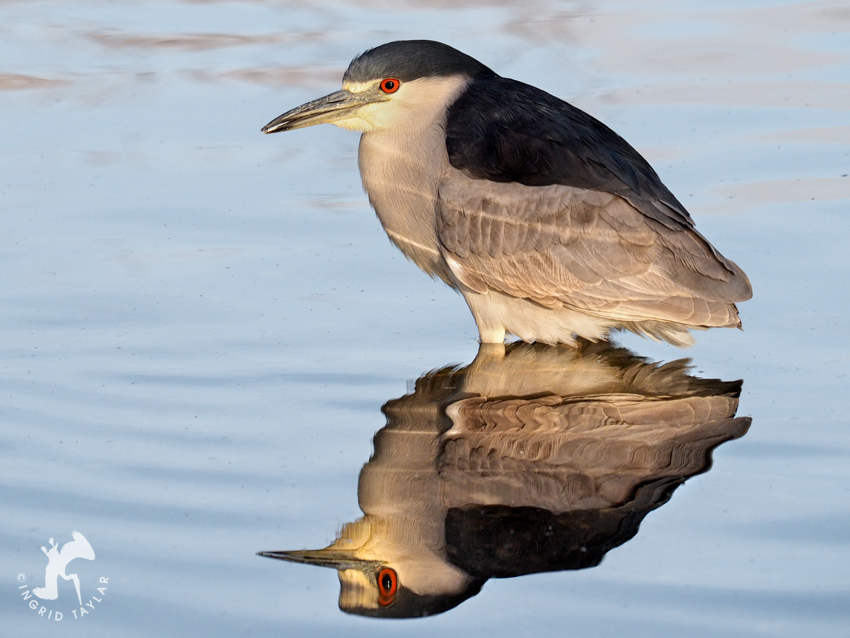 Then he moved into a shaded soak and did nothing but pivot … for minutes, then minutes again … turning 180 degrees right and left as the clouds passed over and mottled the light. 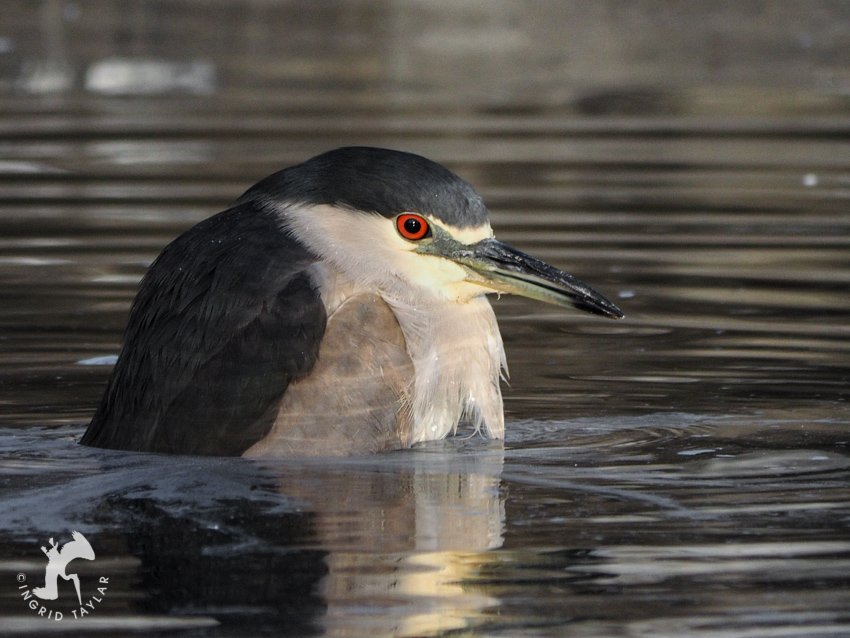 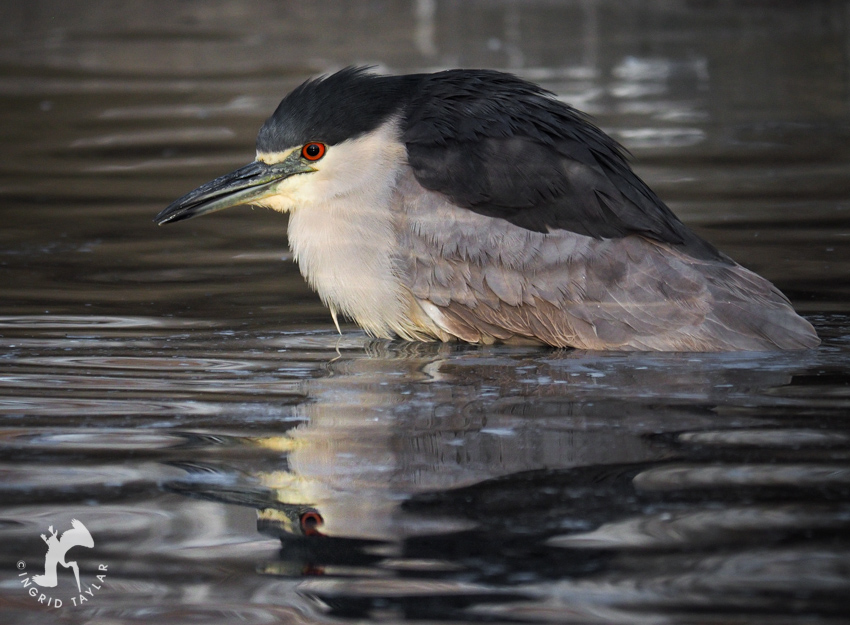 After pointing his bill in one direction for a while, he’d twist around again, capturing the glint of early evening in his crimson eyes.

Finally, the motive: He dipped his bill. It’s a bird’s poker tell — a bath about to break loose. 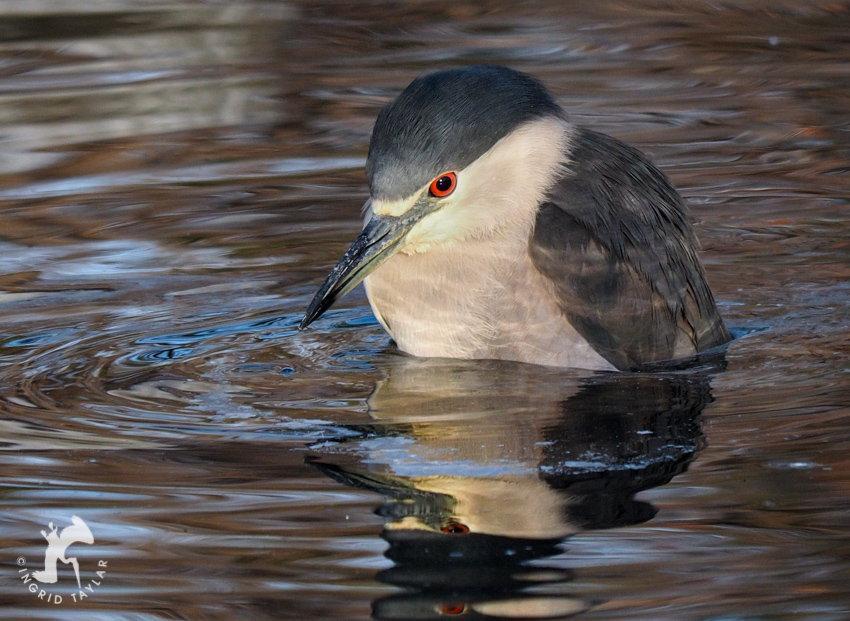 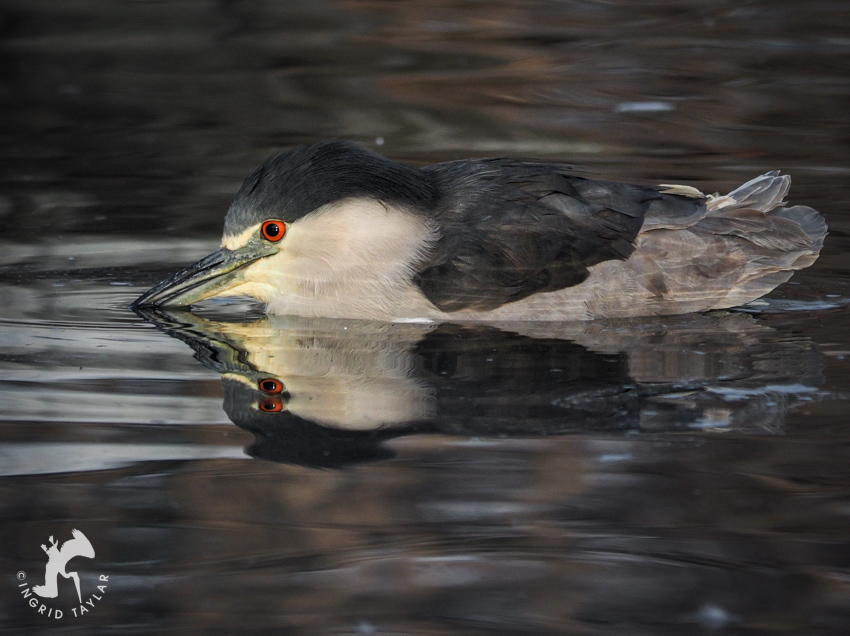 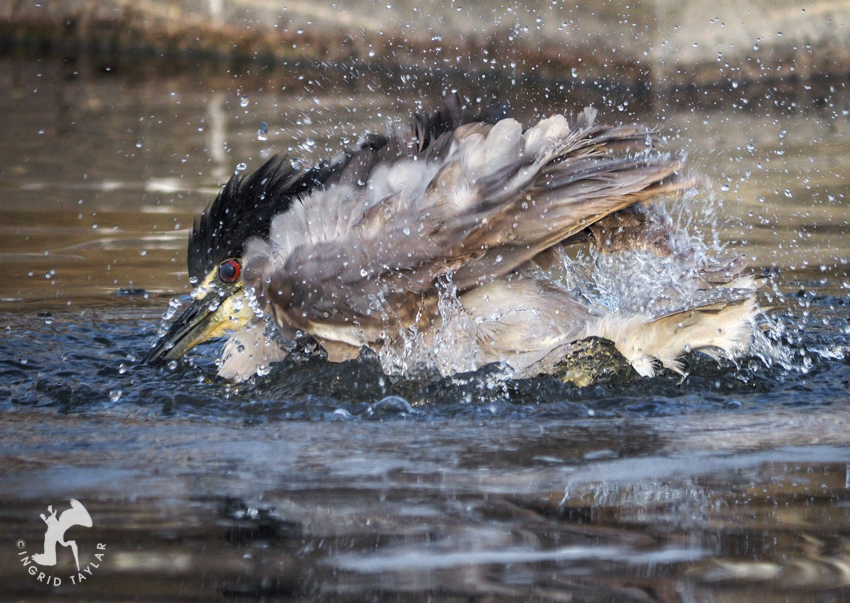 … leaving Sir Night Heron Snow Monkey with a red-carpet upsweep of a hairdo. 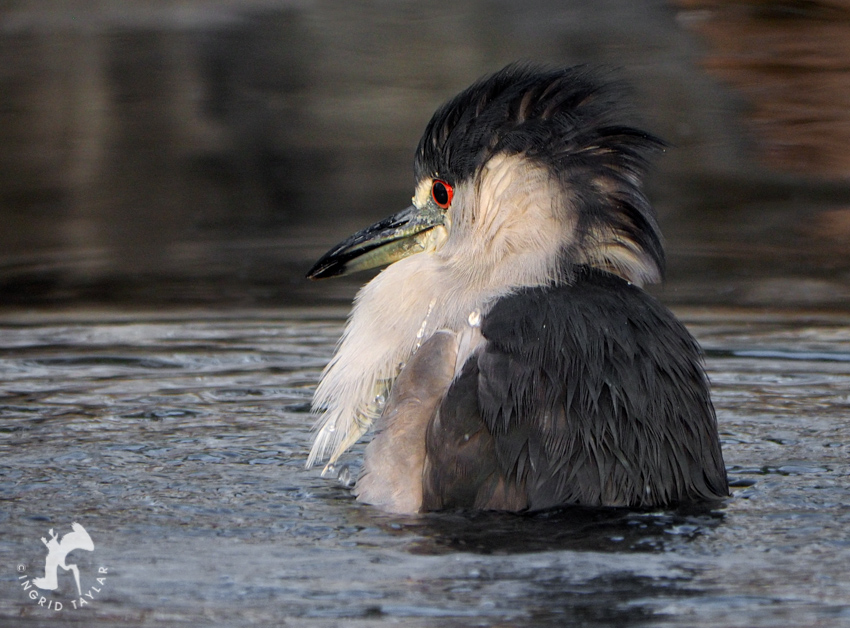 If it’s unfair to say “he” when he could be a she, it’s because Black-crowned Night Herons remind me of wizards, two feet tall and always in a low crouch — as if clutching alchemy vials in their  claws.

[In response to Larry’s comment below, note the white head plume visible in breeding season. Both adult herons were photographed on the same day, at the same location.] 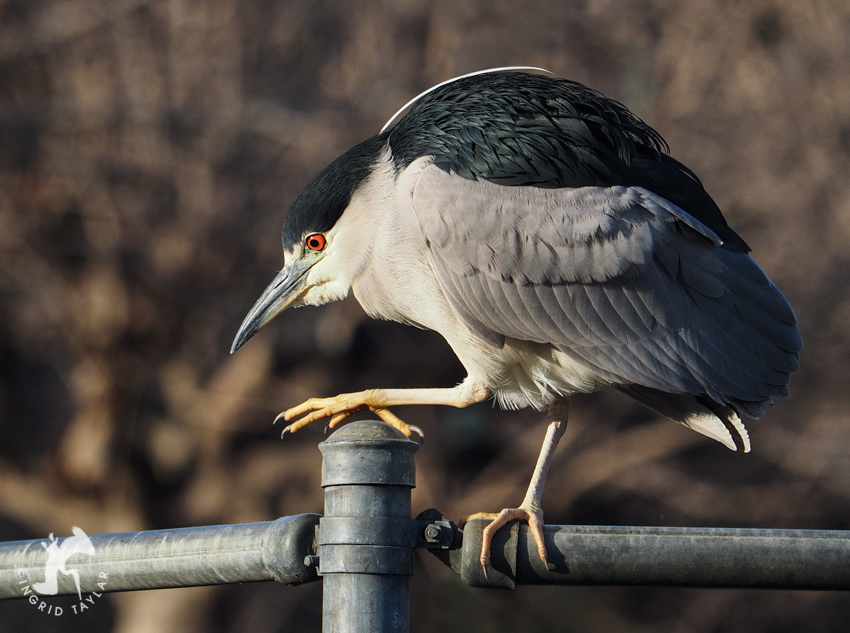 There’s also parity among the sexes, where both night heron parents are monogamous, share in incubating the eggs and then both regurgitate nutrients for their growing young ones to eat. The difference between male and female is a slight disparity in size, so although he isn’t she — nor vice versa — the ambiguity in identification might be understandable.

Black-crowned Night Herons exist on every continent except Australia and Antarctica. In the San Francisco Bay Area where I photographed this bathing bird, Black-crowned Night Herons become urban birds where their habitat overlaps the matrix of traffic and grit. The first night heron I saw after moving to the area was perched on a recycling bin in the middle of the night, in the middle of an Oakland sidewalk.

I photographed this heron below, one overcast morning a few years ago, enjoying some R&R on my car. 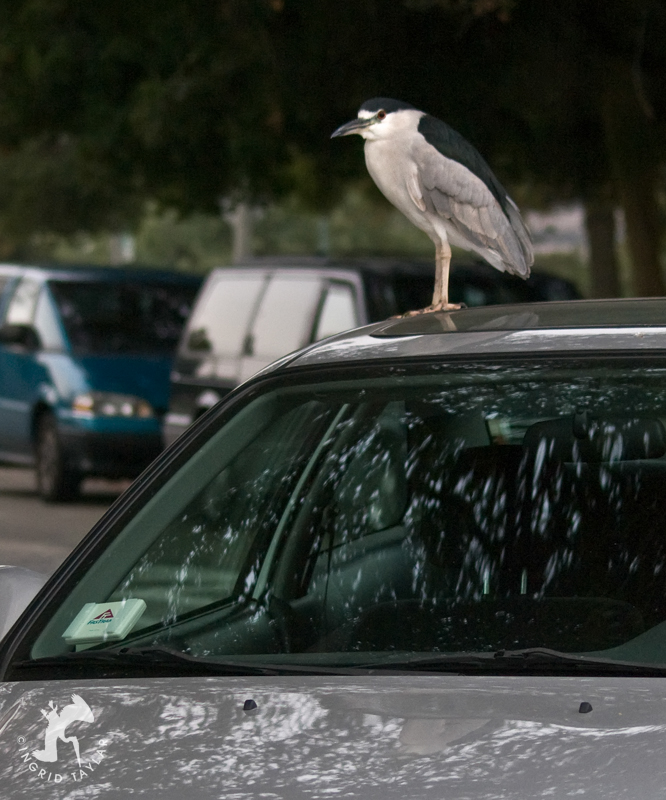 But you’ll just as often find them lurking in natural settings, foraging, resting and nesting in the green patches that encircle San Francisco Bay. 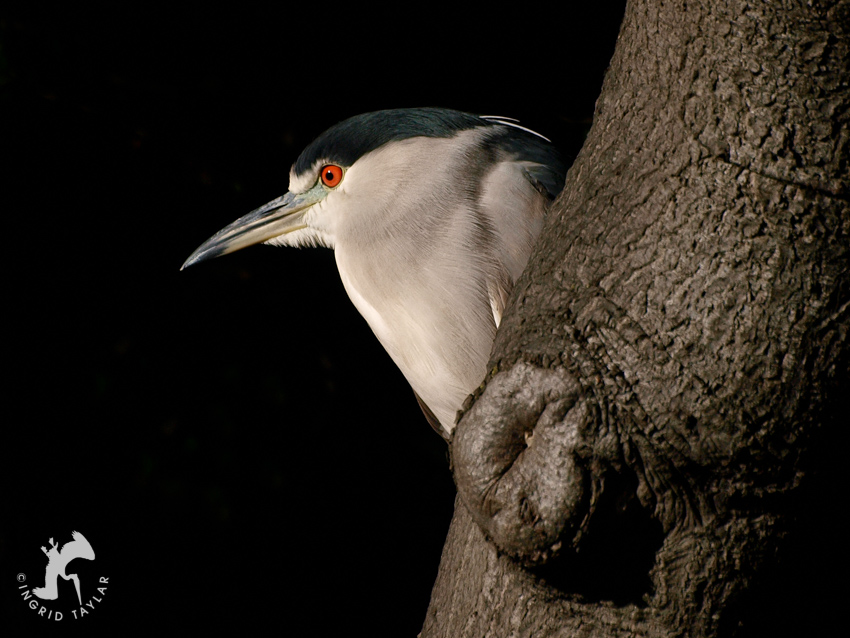 Juvenile night herons grow into their adult plumage over the span of three years. Their coloration is dramatically different with yellow and orange eyes accenting their brown and buffy fluff — which sometimes leads to identify confusion with other birds, like Yellow-crowned Night Herons. 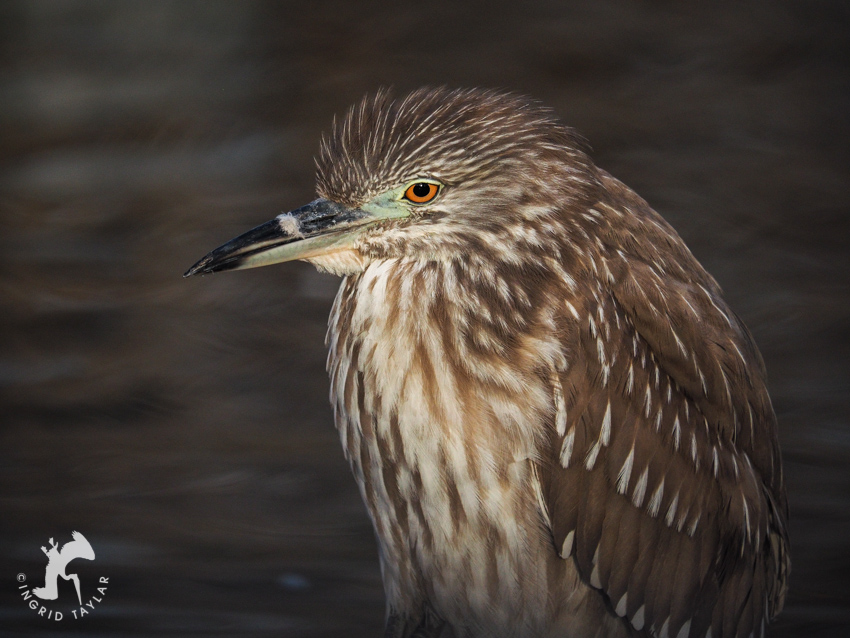 They’ll vibrate their bills to attract fish through disturbance, then dissolve even food as tough as bones in the potent acids of their digestive system. Although I often see night herons in the dusky dark hours as their name suggests, in full daylight I love watching them as I do other herons, retracted in silence like statues until the impulse to fish, bathe or soak like a snow monkey takes precedence.