ingrid2022-04-18T21:46:23+00:00December 12th, 2016|0 Comments
I shoot many of my wildlife images in or near urban environments. That’s been my own habitat, where I live, work and take my camera out on coffee breaks. Hugh and I developed an affinity for the wild animals living alongside us. They face the same stresses that city people face: crowds, traffic, pollution, crime, noise, housing shortages. They have the added pressure of often being unwelcome, when their needs for food and shelter clash with humans who don’t want them around.
There’s usually enough nature in the city for traditional, clean images of wild animals. But the photo ops I most enjoy are the documentary shots, the ones that don’t look quite as beautiful on the surface. They include gritty industrial backgrounds, electrical fixtures, concertina wire, and rain gutters. I’m drawn to these urban-wildlife juxtapositions because there’s a story in each one:
• the Ospreys who return each year to nest under a flight path
• the raccoon mothers who depend on neighborhood trash to feed their kids
• the pigeons who walk the right of way after the grain cars move through
They’re all stories of tenacity. These are species that have lost their natural habitats and are findings ways to coexist in ours, using our tools and structures. There’s a unique aesthetic in those intersections and imperfections.
These are just a few of the urban scenarios I’ve come upon in my explorations.

Osprey pair in Seattle that returns to this nesting platform each year, under the flight path (but not so close to the airport that their nest is destroyed by officials): 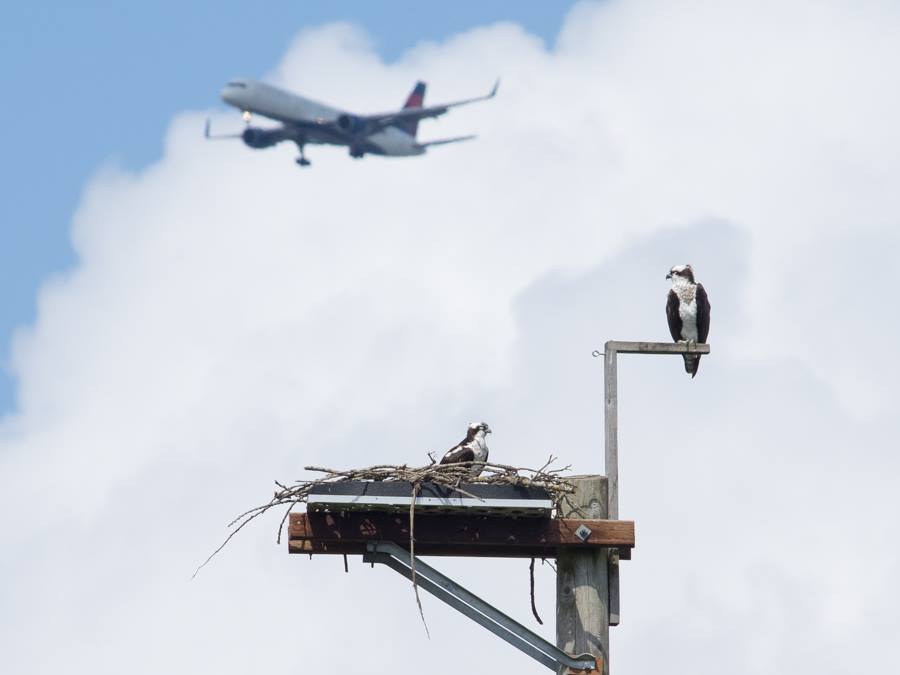 Local raccoon mama trying to feed herself during baby season. A few weeks later, I saw her with three growing kits: 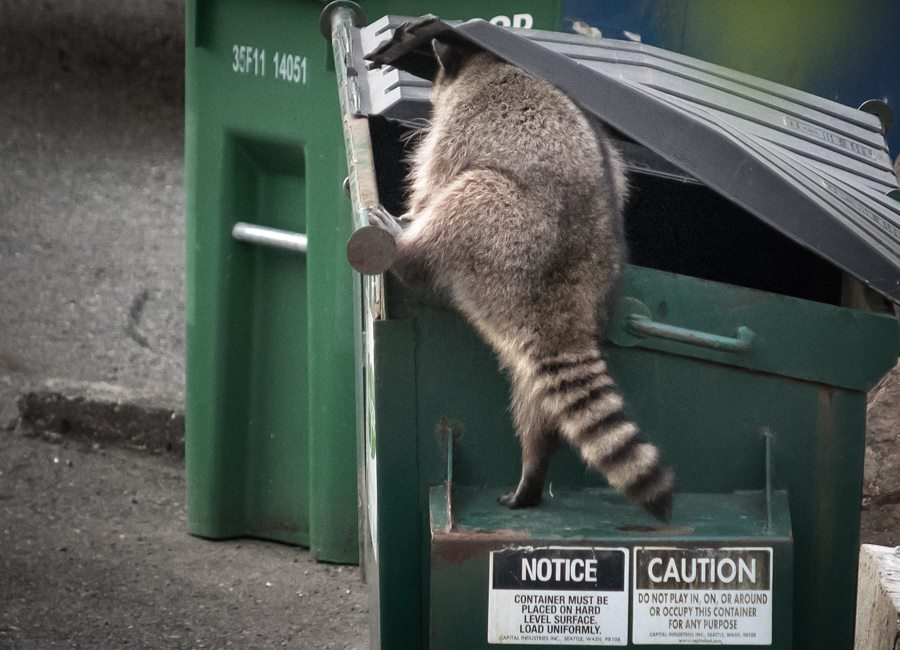 Pigeon on a railroad track in Seattle. The pigeons sometimes ride the grain cars, or scour for grain in the tracks once the trains move through: 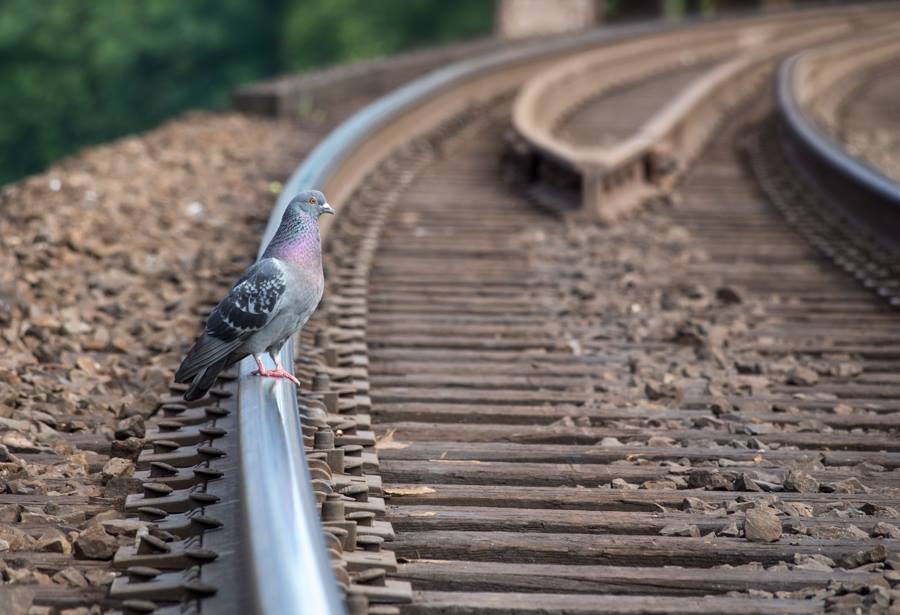 One of the wild parrots of San Francisco, taking charge of a traffic light (Red-masked Parakeets): 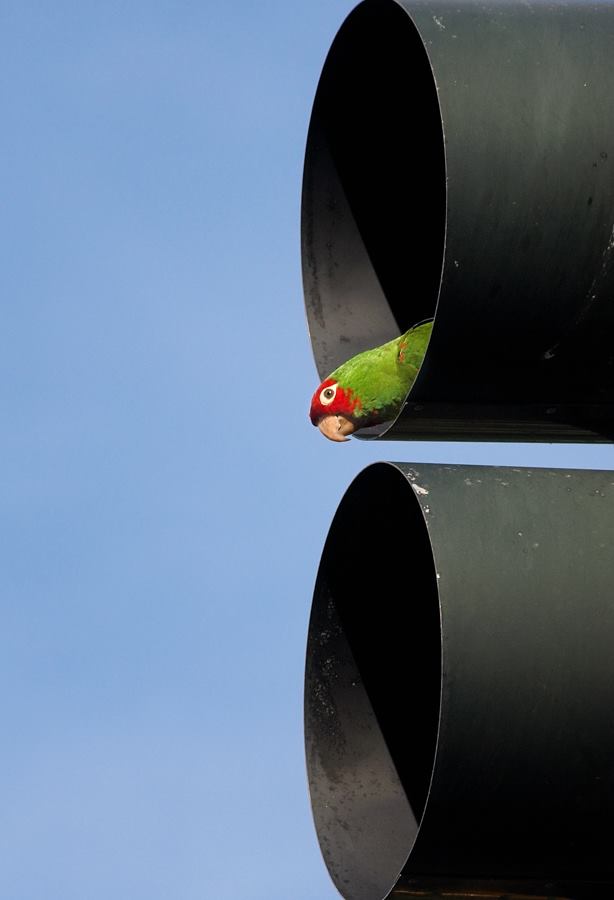 Bald Eagle on a favorite perch in our Seattle neighborhood: 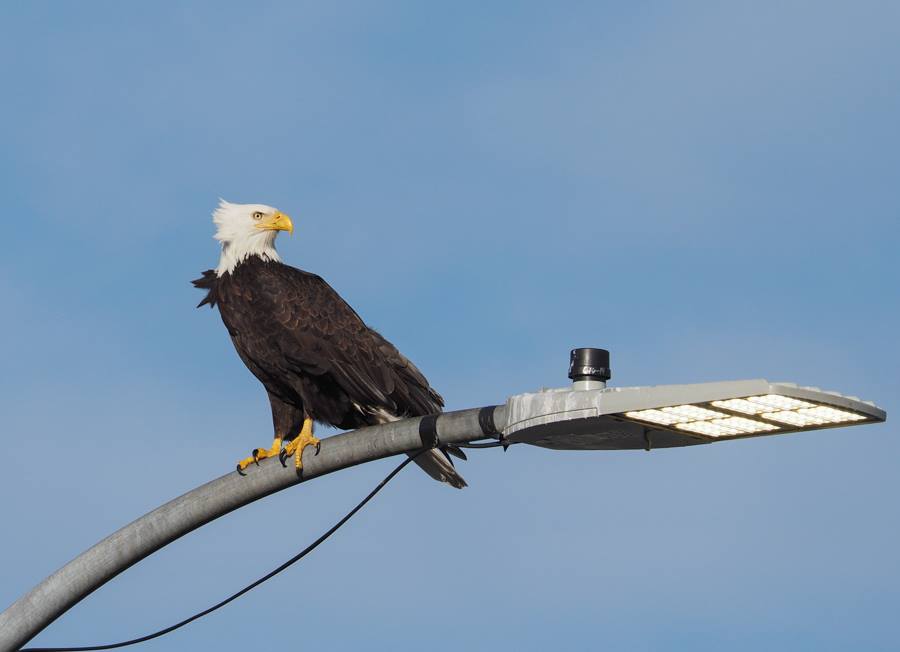 A gull chick blending in with the industrial roof that serves as a city nest. This was a small group of Glaucous-winged gulls raising their chicks in downtown Seattle: 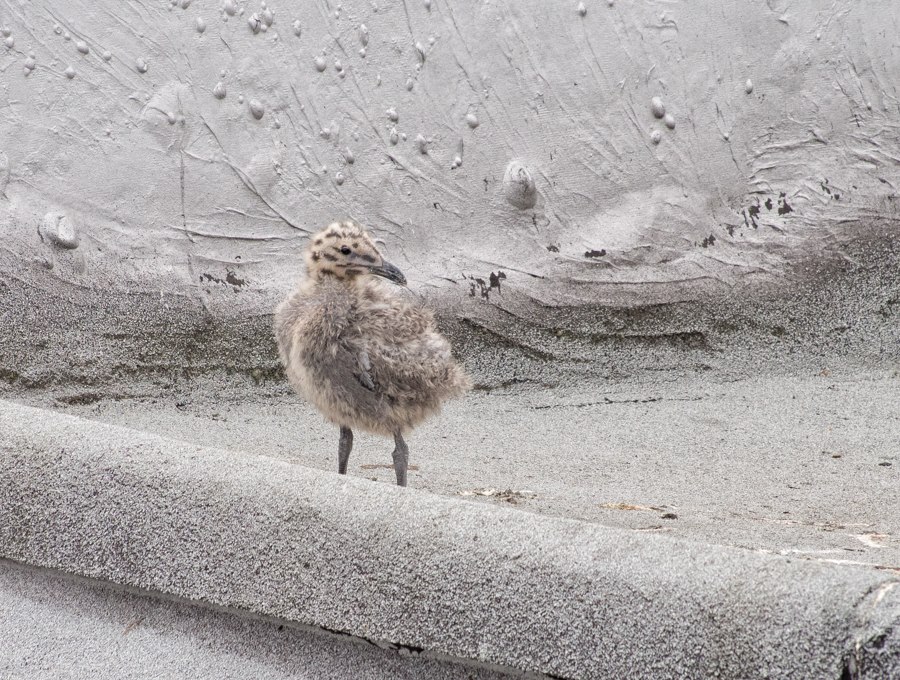 A Great Egret near Sacramento, taking advantage of protected wetlands habitat near the city, ag and industry: 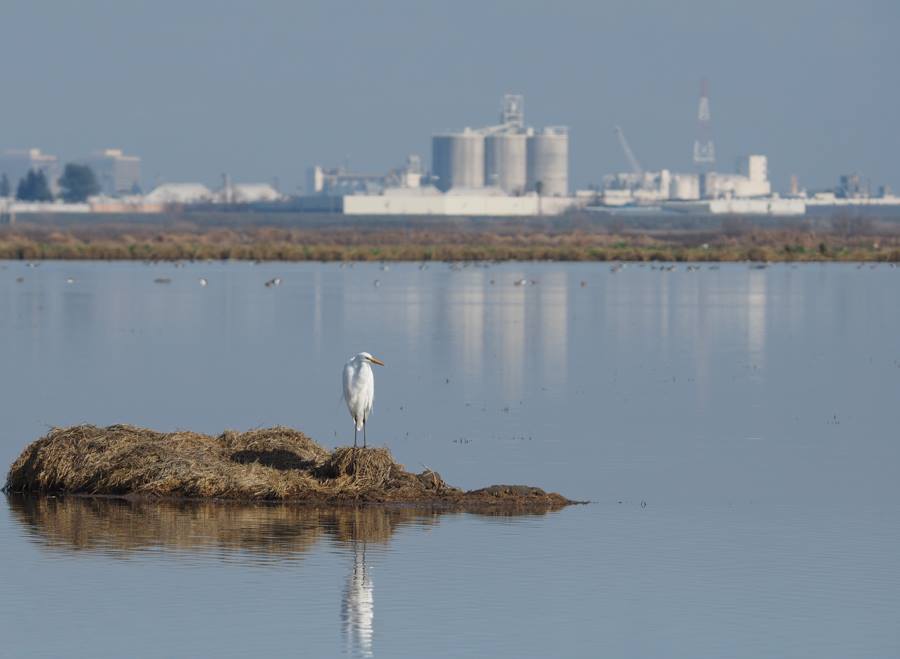 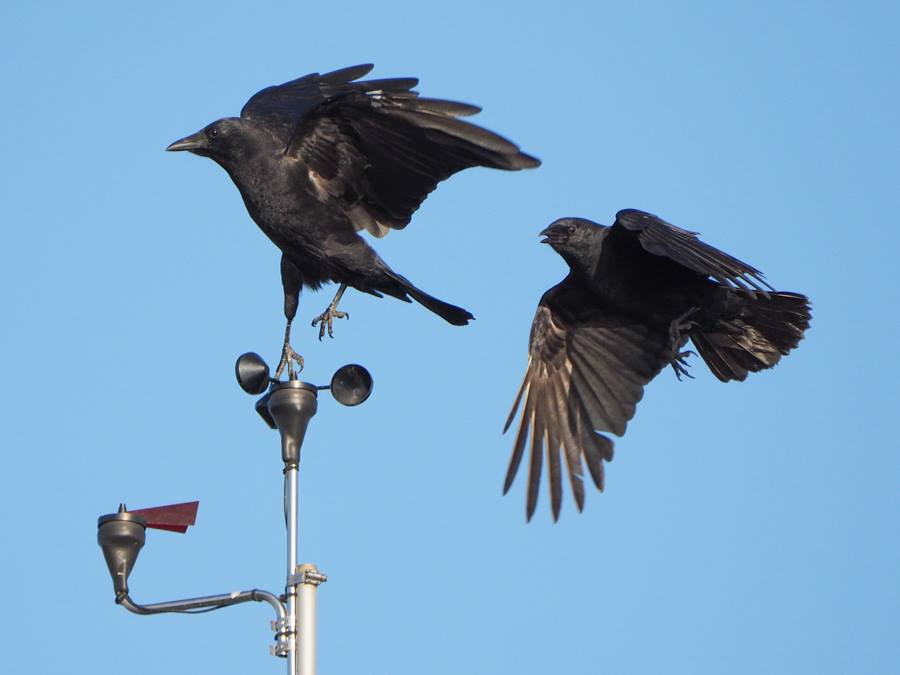 A Snowy Owl sheltering near a house chimney in the Ballard area of Seattle during an “irruption” year — when the Snowies travel farther south to cities like Seattle: 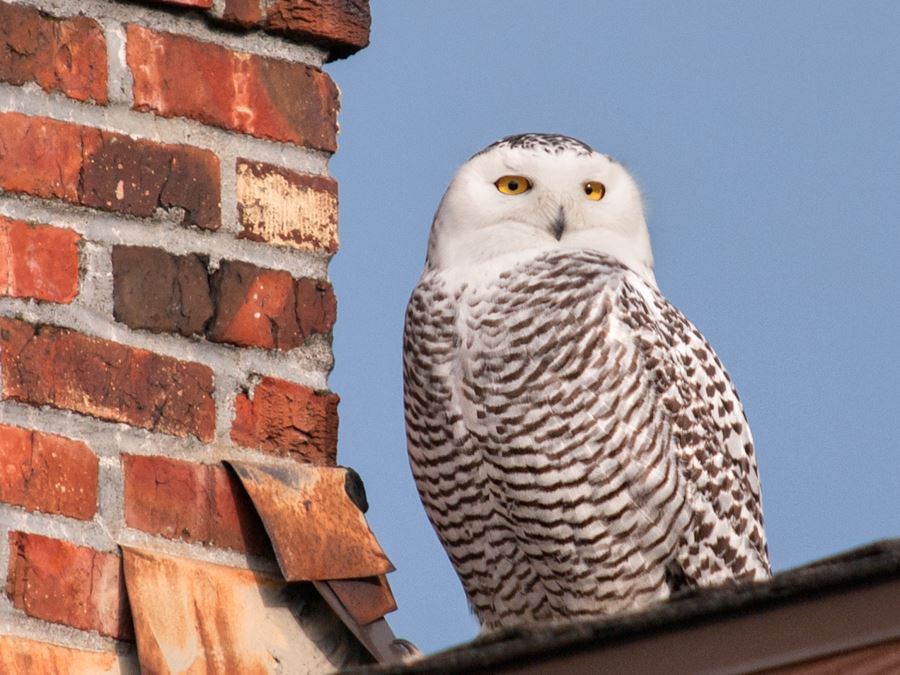 There are actually wild animals in this shot, but I went wide to show the scene. Cormorants and seals haul out in this part of Tacoma in Washington. The contrasts in images like this are always kind of disturbing, of wildlife eking out an existence the midst of industry and pollution: 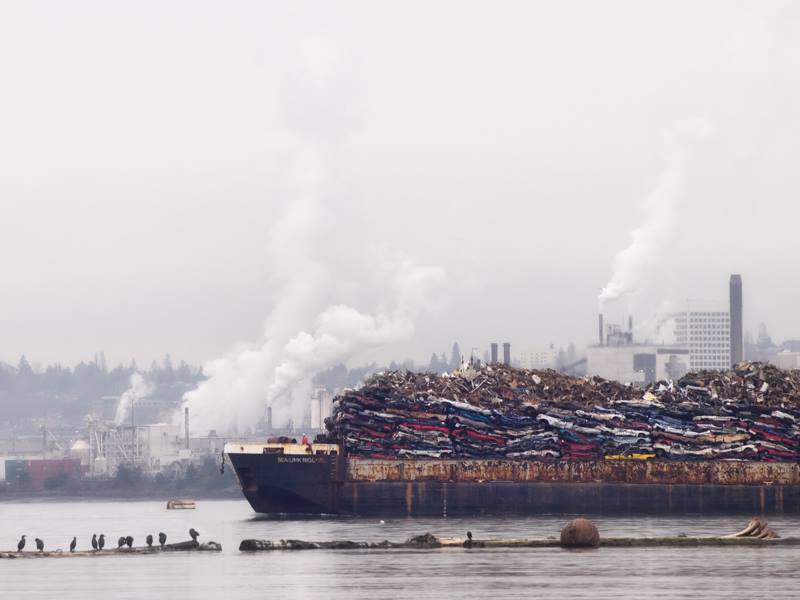 A European Starling taking food to her three babies, nesting in the corrugated siding of this overpass: 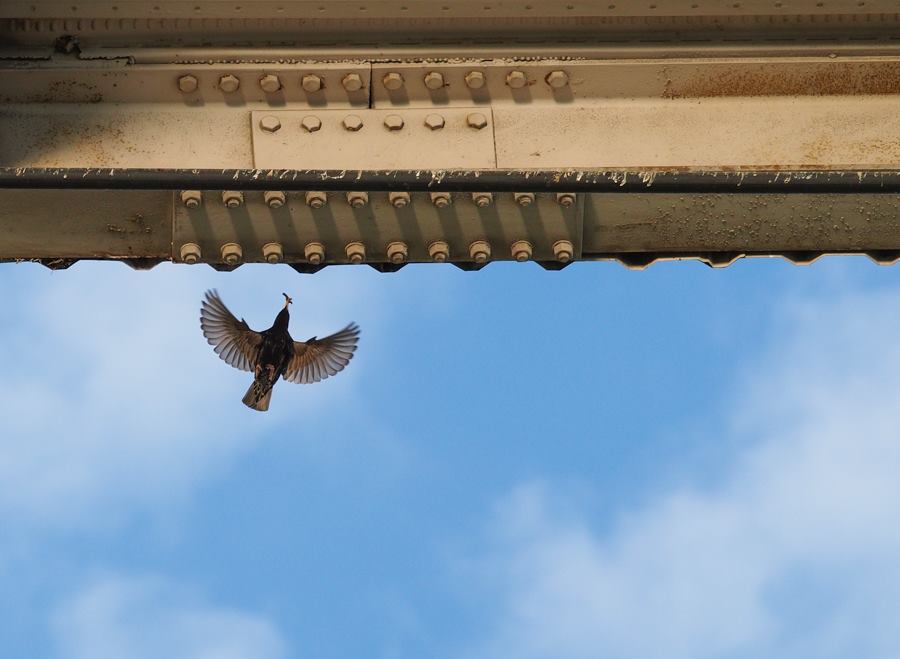