These Are Not Leaves

These Are Not Leaves

My loose homage to Rene Magritte.

They were so quiet, fluttering in the wind just like the leaves. Not even the softest Starling whistle came from that tree. When you’ve birded or photographed enough, or sometimes even just a bit, it’s wonderful how the slightest anomaly then draws the eye. This was more than slight, but the Starlings were in silhouette, and it wasn’t until I did a double take, that I saw just how many birds commanded this tree.

I’ve written about Starlings often, but not for a while. So, I thought I’d re-post one of my early commentaries on why I admire Starlings, despite their many foibles, detractors and non-native complications. Originally posted in June of 2009.
—————————

How Starlings Colonized the United States (and Other Stories)

William Shakespeare gets a bad rap for all of the Starlings. The story (or some say rumor) goes that some Victorian-era Shakespeare fans — misguided to be sure — hatched a plan to colonize, on U.S. soil, every bird species featured in Shakespeare’s plays.

According to this Scientific American article a group known as the American Acclimatization Society is responsible for bringing not just Starlings but also House Sparrows to our shores. One of their members, Eugene Schieffelin, released 100 or so Starlings in New York’s Central Park. It didn’t take long for Shakespeare’s birds to cross this fair land and establish themselves in every part of the United States. The irony seems to be that Shakespeare makes just one mention of Starlings throughout his works. So this one cameo resulted in the huge populations we see today.

Starlings are related to Mynahs, both in the family Sturnidae. They’re exceptional mimics. In a 2007 piece in the New York Times, Jonathan Rosen mentions Mozart’s pet Starling who could “sing a few bars of his piano concerto in G major.” Another New York Times piece cites a study done with Starlings where they were able to recognize sophisticated language patterns, a capability previously not recognized by scientists.

For all their innate brilliance, however, Starlings are much maligned for their invasive status — the fact that they were introduced, grew and survived in such numbers. They are, indeed, super-competitive with native birds. And they’ve been blamed for everything from songbird decline to crop decimation. Despite nearly every human effort to eradicate Starlings, they bounce back in healthy numbers.

The Truth About Starlings

The truth about Starlings is somewhere in the murky middle. According to the above-mentioned Scientific American piece, one species — sapsuckers — seems to have suffered declines for the Starlings’ presence. The article cites a 2003 study, suggesting that the wholesale species decimation attributed to the Starling isn’t warranted. Although the study isn’t specifically referenced, it most likely is this one published in Conservation Biology in 2003. Walter D. Koenig concludes the article with this comment:

. . . these results call into question our ability to predict the effects of exotic species on native species. Despite their rapid spread, striking abundance, and aggressive nature, starlings appear thus far to have had little negative effect on the native cavity-nesting bird species with which they are known to interfere.

He adds the caveat:

Although my results unexpectedly exonerate starlings from the charge of significantly causing declines in native cavity-nesting birds, it does so only provisionally. Additional studies, at both continental and population levels will be necessary to confirm this conclusion.

Why Starlings Matter to Me

Why does any of this matter to me? Well, first, because I’ve always been fond of Starlings. When I was a girl, my neighbors rescued two orphaned Starling nestlings and raised them through adulthood. They were named “Star” and “Ling” and enjoyed the amenities of an animal-loving home and the warmth of family life . . . including sitting on shoulders while dinner was prepared, or learning words and songs the family children taught them. The brilliance, beauty and sensitivity of those birds formed my opinions and helped me become the animal person I became.

Starlings are a significant reason why I volunteer with wildlife today. I’ve heard other stories of non-native species being the “gateway” animals to those who later pursue animal rescue or wildlife rehabilitation. It makes sense. Non-native species like Starlings, House Sparrows, and feral pigeons are accessible to most of us who live in city or suburban settings. The likelihood of one of these birds being the first rescue for a well-meaning person is high. These birds also allow for a human-to-wildlife bond that might otherwise be missing in crowded urban contexts.

A number of wildlife rehabilitation facilities, including ours, take only “native” species. Thus, I sometimes find myself trying to find secure placement for Starlings or pigeons or other “non-natives.” For better or worse, Hugh and I simply cannot make the native/non-native distinctions viscerally. That’s admittedly an emotional perspective, not a biologically informed one. So we try to work with the biological imperatives and do our best for all parties involved. From our earliest years — long before we ever worked with wildlife — we rescued any injured or needy creature that crossed our paths. Those habits (again, for better or worse) are not easily broken. In most cases, for the two of us, it comes down to a decision about whether or not to help an individual animal. And then abide by proper considerations for placement of that animal, depending on his or her species and status.

The issue of how to handle non-native species across the board can be a divisive one, especially among those involved with wildlife or birding exploits, going even beyond the legal restraints governing non-natives. That’s why I mention the above facts — to suggest that mistaken characterizations often follow the label of “non-native” and further exacerbate the sometimes cruel actions perpetrated against these animals as they acquire negative designations. That’s not to say that a massive flock of Starlings can’t decimate a crop or invade a native bird’s habitat. But merely to suggest that hyperbole can often taint the image beyond realistic bounds.

In the end, when you look at wildlife studies, counts, endangered species concerns, the biggest threat to any native species is our own voracious appetite for development, which reduces viable habitat for all species to a point where competition becomes exacerbated. It’s easy to single out a species as a nuisance, when the most critical factor in conservation is almost always human activity and our growing global population. As Jonathan Rosen in the New York Times piece referenced above: ““It isn’t their fault that they treated an open continent much as we ourselves did.”

That’s my reasonable defense of Starlings as individuals. I’m sticking to it.

Found an injured or orphaned Starling? Check out Starling Talk for information on how to care for the bird or where to find help. The site also deals with help for House Sparrows, another non-native bird species. Some local facilities will accept non-native birds, it varies from facility to facility. Call your ahead to find out. Even those hospitals that don’t accept non-native animals can often give you advice for how to care for the animal you’ve rescued. Here are a few San Francisco Bay Area wildlife facilities.

The California Department of Fish and Game prohibits release of animals not native to California, without written permission from DFG. If you’re interested in the more precise DFG  rules on restricted species, you can peruse the Restricted Species Laws and Regulations (pdf). Birds like baby Starlings can be rehabilitated and kept by individuals. 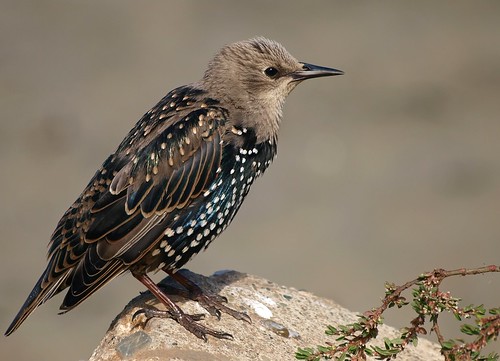