Note: Taking into account my title … no sea lions were harmed in the deployment of these “seal bombs.” There is, however, one dead salmon — a sea lion’s meal.

I’m a relatively new witness to the conflicts in the Pacific Northwest between humans, sea lions, salmon, tribes, dams, fish ladders, and fisher people. As such, this was my first experience watching explosive sea lion deterrents in use at the Ballard Locks … ATF-regulated “seal control” devices most often known as “seal bombs.”

I was leaning on the rail, snapping a few shots of a California Sea Lion eating a Chinook salmon it caught near the fish ladder. I was downstream from a large group of tourists watching the spectacle of the sea lion fishing. Sea lions generally kill the salmon quickly, but afterwards, they break the carcass into edible pieces by skimming it across the water. This, in turn, attracts gulls who go after the scattered fish fragments.

I caught the last few minutes of the scene: 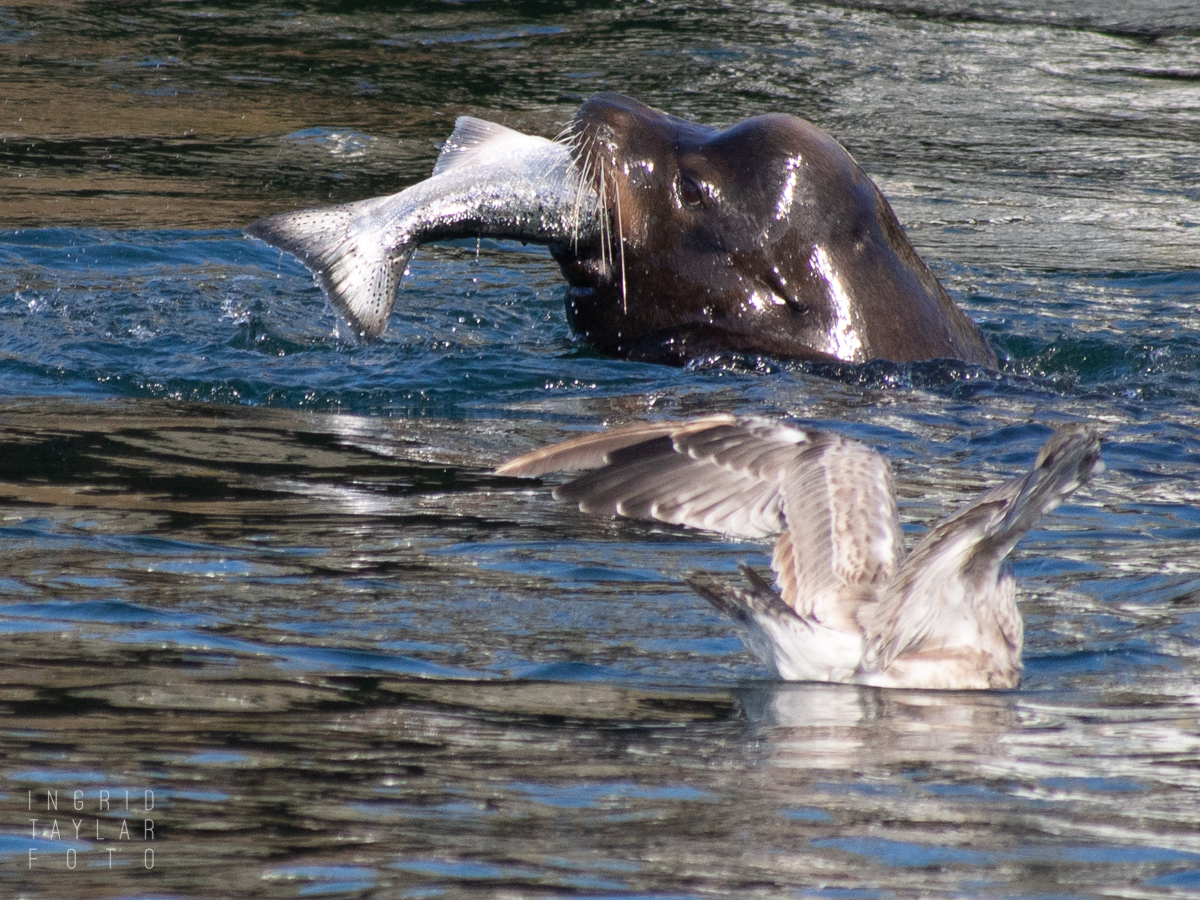 The sea lion then submerged below the spillway and didn’t surface for a while. In my periphery, I saw an orange object tossed from the deck where the tourists congregated. I thought someone had stupidly thrown a toy ball into the water. I wasn’t even thinking “seal bomb” until the percussive effect of the firecracker, tossed right against retaining wall, rattled my feet and shook the railing. It was jarring and unexpected.

In response to the explosive, the California Sea Lion bolted westward toward Puget Sound. He didn’t surface again for many minutes. They can stay submerged for up to 10 minutes, although they usually don’t stay down that long. Finally, I saw a sea lion head emerge, skimming the water hundreds of yards away at the boat lock entrance. Sea lions tend to get wise to these hazing tactics over time. 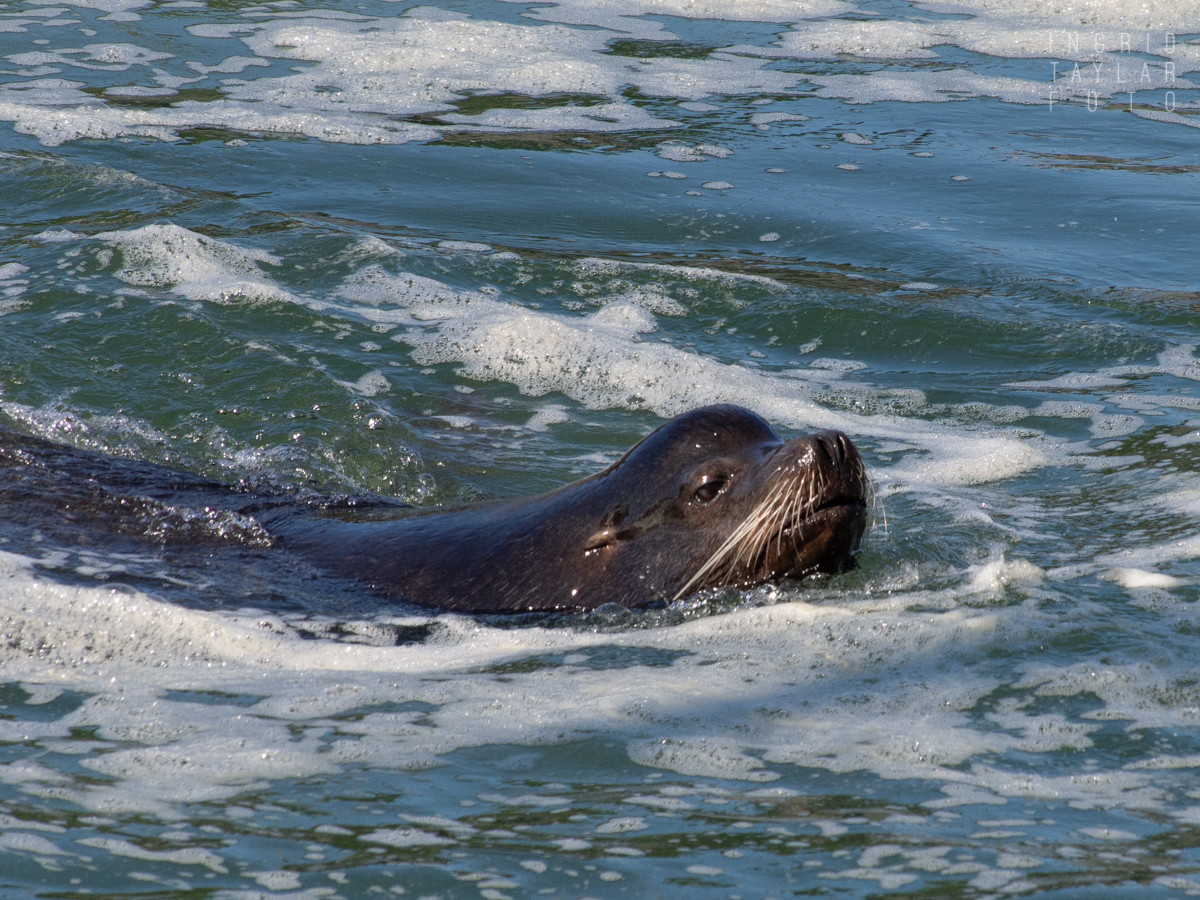 The official who threw the seal bomb works with the salmon tagging operation that tracks some salmon stats as the fish move upstream. He walked a short distance past me before igniting and throwing two more seal bombs over the railing. I don’t know what the prescribed distance is for deploying seal bombs in public situations, and couldn’t find that info at the ATF website. The force is often described as similar to an M80, although the construction of the firecracker is different for water usage. In this photo, the distance is visually compressed by the telephoto lens. 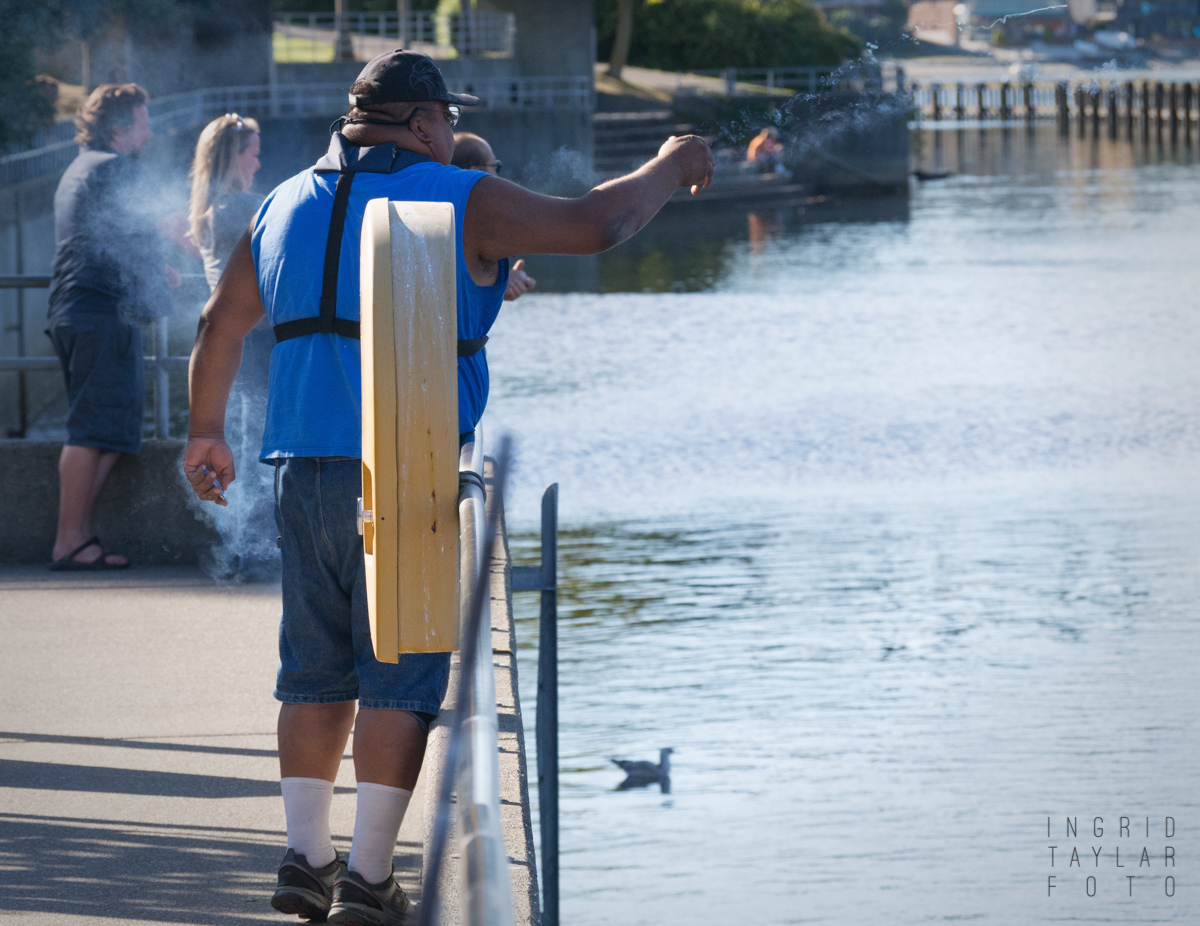 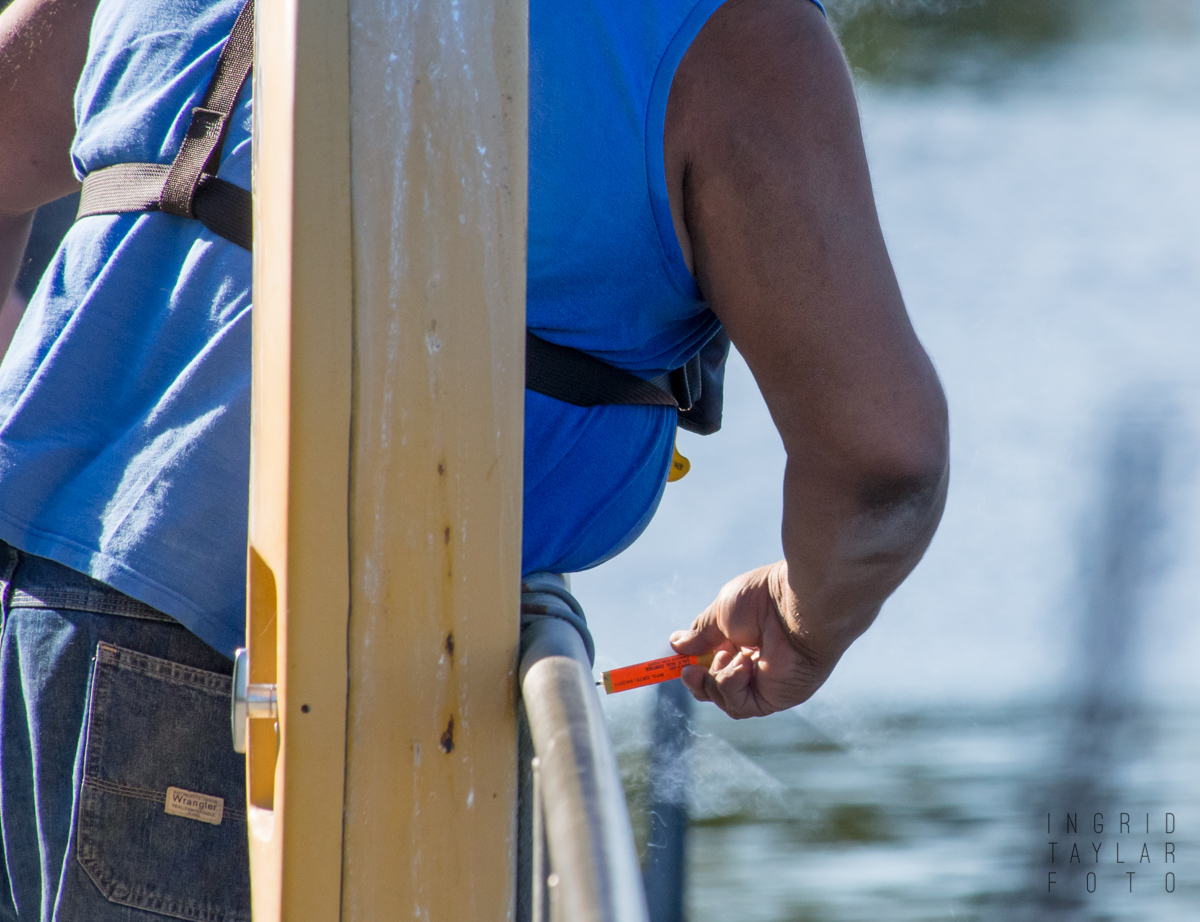 As I wandered toward the crowd, I overheard one of the taggers explaining to the tourists that the sea lion was spooking the salmon away from the ladder entrance. It’s true. The entrance to the fish ladder is a bottleneck and the massive shadow of the sea lion is enough to give salmon pause. That explanation is still but a tip of a very large iceberg as it concerns sea lions in the Pacific Northwest.

Sea lions, like the famous Herschel, are regularly hazed, and also trapped and killed, in the perpetual conflict that exists between us and them. It all revolves around the salmon — and it’s complex enough that I will refrain from expounding on my own unscientific views on the sea-lion-salmon conundrum. In the bigger picture, salmon face hurdles at every level, harmed by habitat destruction, pollution, dams, human fisheries, intentionally-introduced, sport-fishing species like Walleye. Thankfully, there’s growing awareness for how all of these factors play into their survival. It’s worth researching the issue from all sides before accepting any wildlife practices without question. I’ve provided a few links below on various aspects of the Pacific Northwest salmon and sea lion issue, if you’d like to do more reading.

In terms of sea lion “control,” I appreciate the use of non-lethal deterrents, as opposed to the lethal trapping operations happening at the Bonneville Dam this year. It’s still tough for me, personally, to witness wildlife hazing in any form. In the case of California Sea Lions, you’re also often dealing with people who proudly parade their malice toward this species.

Read some fishing boards online and you’ll find threats and malicious intent toward these animals. The sea lions who wash up as gunshot victims are testament to this vitriol and illegal application of violence. Harsh methodologies are so often at the top of the toolbox when people are dealing with wildlife conflicts. Because marine mammals like California Sea Lions fall under the auspices of the Marine Mammal Protection Act, they at least get more official consideration than many species when it comes to actions deemed appropriate. But, that doesn’t change the perceptions of those who resent the competition for fish. 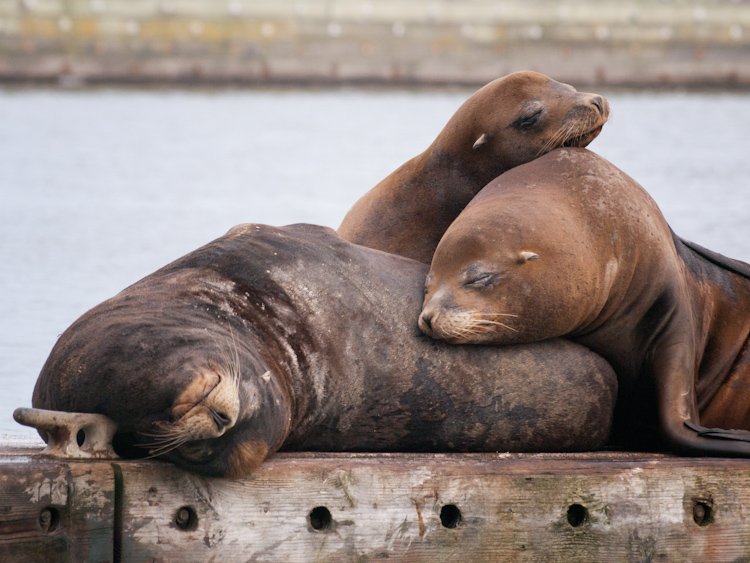 It’s my general contention that wildlife is too often scapegoated for the ecological sins of humans. In this case, there isn’t always consensus on the precise effect California Sea Lions are having on salmon runs, although there is some effect, of course, since sea lions are natural predators to the salmon we humans have pushed onto endangered lists.

You can read about the official stance at the Washington Department of Fish and Wildlife website: Q&A on Sea Lion Predation. At the other end of the controversy are groups like the Humane Society, who filed suit to stop the Bonneville Dam lethal control of sea lions. The HSUS suggests that the impact of Sea Lions on salmon is lower than stated, at least significantly lower than what the fisheries take. It’s also quite obvious that most of these problems exist at all because of our rampant over-development, habitat destruction, fishery exploitation, and other practices that account for most of our environmental imbalances. As such, it’s difficult for me, personally, to get behind wildlife control measures if they also ignore some of the overarching human-generated problems, and meaningful solutions to those problems.

If you have strong feelings about this issue one way or the other, I’d love to hear your perspectives.

I keep waiting for and working toward the day that we, as a species, migrate away from our damaging anthropocentric ideology, and begin to embrace a more circular and inclusive web of understanding when it comes to how we interact with all other species on the planet. I don’t see it as likely in my lifetime, but I refuse to see it as impossible.

I got this graphic from the Eco-Vision Sustainable Learning Center and have tried unsuccessfully to locate the original designer of this diagram. I’d like to give proper credit if possible. It’s been circulated widely on Facebook and in blogs, so you may have seen it previously in your social media wanderings. 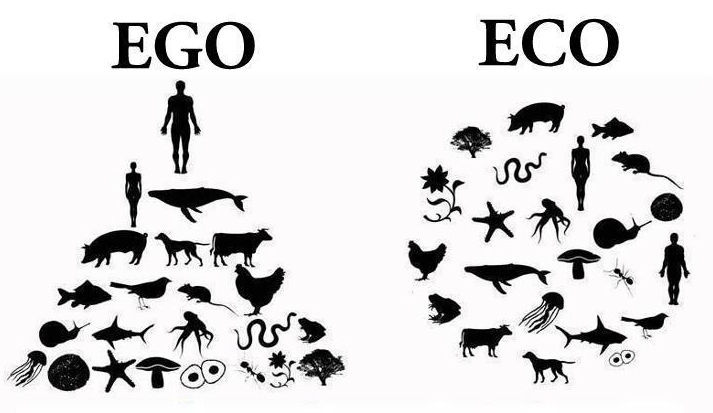 Information on the salmon + sea lion controversy in the Pacific Northwest:

Edited to add: While researching sea lion hazing and deterrents, I came upon this piece, featuring a fisherman who invented a device called the Orca-Stra. It broadcasts sounds of Orcas to drive sea lions away. I’m not sure if the device has been field tested since this piece ran back in February.