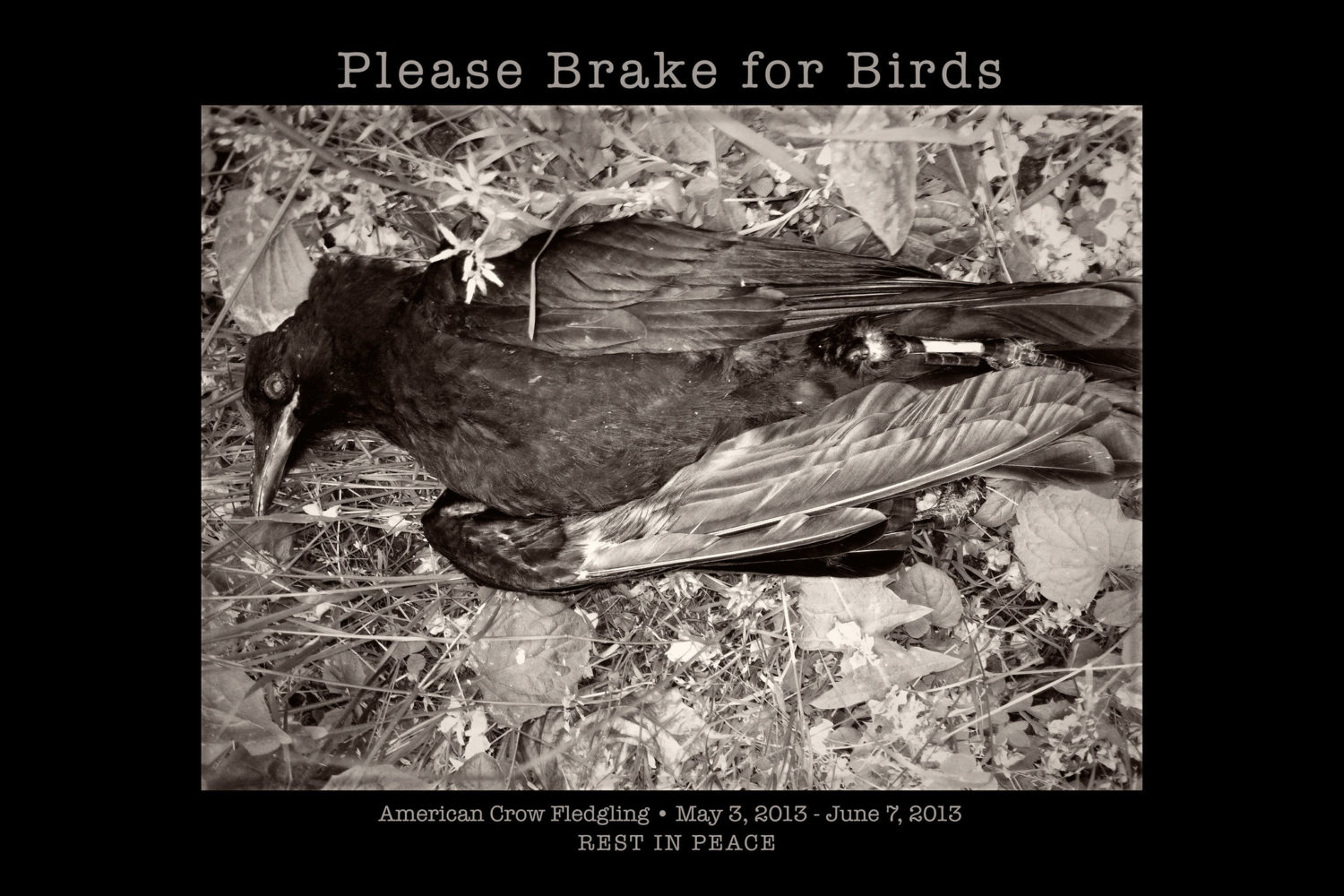 I took this photo in 2013, one of many birds or animals I’ve found struck by the side of the road or bike path. Today, I came upon another fledgling, dead alongside another path … a little bird whose story I witnessed from almost the moment he left the nest. I saw him exploring his world for the first time, and then found him struck dead this morning, probably by a bike along the well-traveled trail.

This is a reminder to please slow down and brake for animals, especially this time of year.

The story behind this photo:

Hugh and I were on our way to catch a morning ferry. We passed a crow flailing by the side of a residential road, her beak agape, flapping but unable to move. We swerved to the side and I ran back to grab her before another car could hit her.

As I got to her, I saw she’d closed her beak and also her eyes. When I lifted her off the pavement, her neck was limp in my hands. I couldn’t see or feel any sign of remaining life.

As I carried this little crow from the pavement to a cushion of grass, I noticed the pink gape. It’s the fleshy, light-colored spot at the base of the beak, indicating this was a young crow. She would have had blue eyes, too, had her eyes been open and bright. Baby crows have the most vivid blue eyes which morph to black as they grow older and more seasoned in this world.

Overhead the crow’s parents were in a fury. They dive-bombed us, screaming at us to get away from their baby.

We left the crow under a tree, and walked back to the car. Not ten feet up, I saw another black shape by the road. I was praying it wasn’t another crow. As got closer, though, I saw it was — the same age, with a pink gape. Also struck and killed. I moved this little one, too, under the tree and choked back what felt like a cloudburst.

The crow parents followed us up the street, mobbing us and crying out. I could feel the whoosh of their wings swipe my hair. I told them I was so sorry, obviously to no avail.

One of the parents followed our car to the end of the block, frenzied, diving. I cried almost the full hour’s ride back. These two diligent parents lost the two youngsters they’d cared for, protected, and worked so hard to raise, against all environmental and human odds. And then, the babies had the great misfortune to fledge too close to a road.

I used to think that with time, it would get easier — that I would become more hardened. But, it doesn’t. And, I don’t. Today, my heart broke into pieces again.

This time of year it’s particularly critical to slow down and notice, as young birds fledge, and baby animals learn about the dangers of a human-driven world for the first time. It doesn’t take much effort to look out for them, and give them a chance to survive. We owe them that much, for all we take away. ❤️