Of Lizards and Lichens and Land

Home--->Blog, Popular Posts--->Of Lizards and Lichens and Land
Previous Next

Of Lizards and Lichens and Land 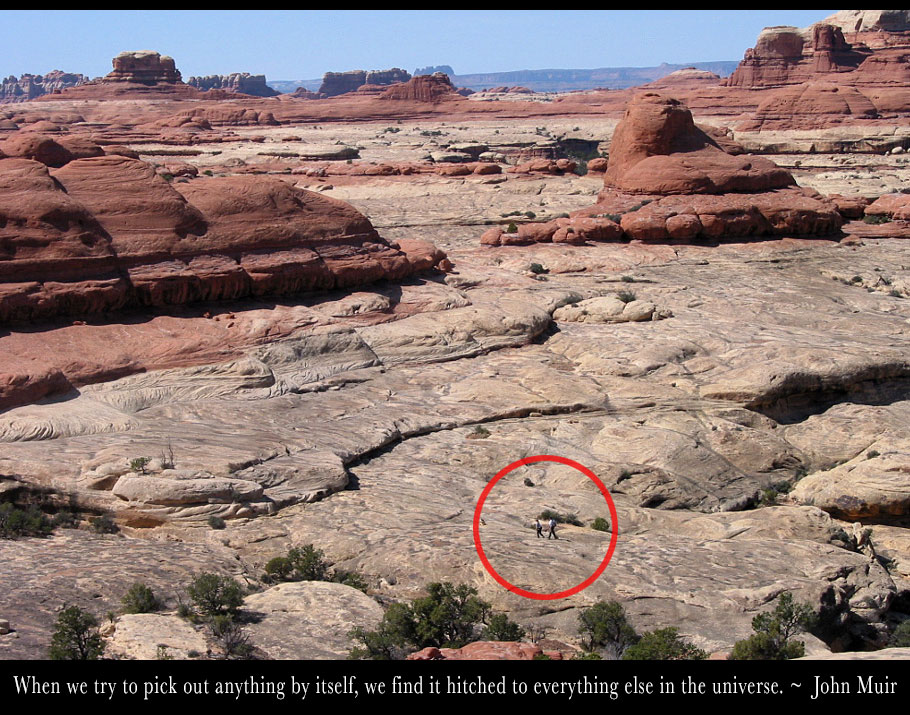 This photo was taken a number of years back by my mate’s cousin, to show the true perspective as we hiked atop the rock strata of Canyonlands in Utah. Here, the youngest layer of geologic deposits is a million years old — built upon shales, sandstones and clays in plateaus and stairsteps hundreds of millions of years old, some still imprinted with dinosaur tracks, some coated in living, cryptobiotic soil that nourishes and waters the grasslands and junipers of these vivid lands.
I look at this picture from time to time as a reminder of my place, our place in this enduring but also fragile universe. These geologic slabs survived epochs of winds, rains and the grit of sand erosion — yet a single human footstep or tire track on the cryptobiotic crust can crush and deplete that soil for five years, ten, sometimes forever, rendering this life force a lifeless dune.
We’re specks on this landscape but hold a disproportionate and, too often, an unfortunate power. I think about this most profoundly now as we all navigate the disparities in perspective that have so many of us distressed. At its most fundamental, we all share this mother earth. As such, we, and all of the other life dependent on our judgment, also share the risks and repercussions of not treating her well.
I’ve had this discussion with people who don’t share my perspective about our world and our environment. One said to me, “I guess the environment isn’t that important of an issue to me.” My response is always, the “environment” is actually not an “issue,” regardless of how corporate or political interests try to marginalize it as something far from relevant. It is the air we breathe, the water we drink, the food and fuel for every single being, and for the plants that hunger and thirst for the same. It is at the core of our most critical social justice issues, in the gaps between the affluent and the poor and the quality of life that results from that chasm. It is the tangible and intangible space around everything that constitutes life.
As this photo suggests in a literal and metaphorical sense, we humans are intertwined on the landscape with the lizards and lichens of the desert, so much so that the extinction of one, the absence of, say, a honey bee will mean the extinction of us, too. And this calls to mind the David Hume notion that “the life of man is of no greater importance to the universe than that of an oyster,” except for the fact that we have the power and choice to exert a bigger influence in the outcome for ourselves and for the oyster.
Every other life hinges on the human being’s ability to truly understand this, this interconnectivity and interdependence. No matter what we believe about each other and what hard feelings any of us bears — I obviously include myself in that web of emotion — I still wish, in the face of palpable doubt and hard experience that has made me cynical, that we could someday agree on this: that the planet which sustains us all is not a negotiable asset. That belief drives the fight in me personally and in my best mate Hugh, and I treasure everyone around me who continues to fight for the goodness they believe in, in this life.