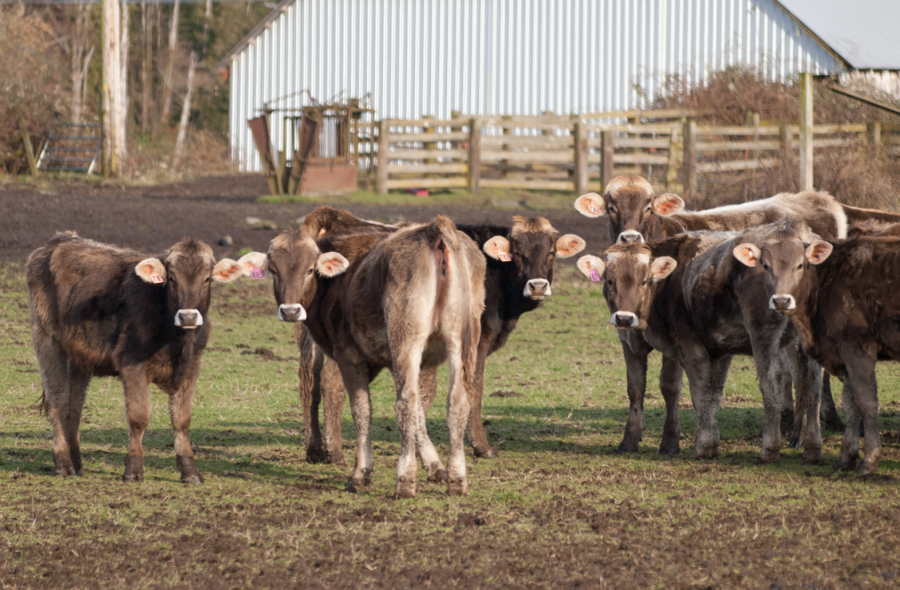 Edited 11/9/12: I received some additional links which expand the discussion here, concerning the findings of the FAO report I link to below. I’ve noted a few corrections in the actual text. But, you can read a good summary of the points in this New York Times piece, Measuring Livestock’s Long Shadow. In this article Robert Goodland, a retired environmental advisor with the World Bank, talks about how livestock’s contribution to greenhouse gases is closer to 51 percent than to the 18 percent cited by the FAO. At the conclusion of this piece Goodland writes: “replacing at least a quarter of today’s livestock products with better alternatives would both reduce emissions and allow forest to regenerate on a vast amount of land, which could then absorb excess atmospheric carbon to reduce it to a safe level. This may be the only pragmatic way to reverse climate change in the next five years as needed. Sufficient renewable energy infrastructure is projected to take at least 20 years and $18 trillion to develop.”

Additional articles on the subject of livestock and climate change can be found here: Chomping Climate Change

Read the rest of this post for an overview of how livestock production affects wildlife and wild lands, and be sure link out to the other articles, reports and documents provided for more thorough coverage of this issue.

This issue of livestock and wildlife sustainability has been on many minds here in Washington because of the recent slaughter of the Wedge wolf pack. The crux of it is that the protestations of one cattle rancher resulted in the killing of Washington’s pack of gray wolves. The Washington wildlife department made the decision to kill all members of the pack in response to a rancher who showed a clear anti-wolf agenda from the start. He was even offered free measures like ranch riders as non-lethal deterrents, but he refused. He was grazing his cattle, unattended, on public lands where predators were present.

In response to the Wedge Pack slaughter, Larry Jordan broke down the numbers and the flaws of our livestock public grazing model at his blog, The Birder’s Report: The Wedge Pack … Exterminated Because of One Arrogant Rancher. He presents an argument against subsidized grazing on our public lands. An excerpt from his piece:

In the eleven western states, 70 percent of the land area is grazed by livestock. In terms of the extent of area affected, other types of land use like logging, mining, and crop agriculture pale in comparison. Significantly, in the 1990s, the normally staid scientific community began to speak with a firmer voice. The American Fisheries Society, the Society for Conservation Biology, and the Wildlife Society all endorsed formal position statements on the nefarious biological consequences of grazing. “Livestock grazing . . . has a host of negative ecological repercussions. . . . Much of the ecological integrity of a variety of North American habitats is at risk,” intoned the conservation biologists. “The inherent productivity and ability to sustain fish, wildlife, and livestock is in jeopardy,” echoed the wildlife biologists.

Related to this issue of predator killing and livestock production is the article I wrote about a few months ago — the Sacramento Bee exposé on USDA’s Wildlife Services and their record of ruthless practices toward wild animals, often at the bidding of ranchers, some of whom run their cattle on public land. The three-part series is a difficult read because of the cruelty depicted, but it’s worthwhile to understand the full scope of the problem if you haven’t yet seen this investigative piece by Tom Knudsen.

The connection between all of these vignettes is that commercial livestock farming, particularly if done without any sensitivity for rotation grazing or the type of habitat, is responsible for various ecological problems that relate directly to the preservation of our wild lands and our wild animals. Livestock grazing can affect habitat, waterways, mammals, birds, fish, plants and climate. It’s an issue wildlife watchers, photographers and birders don’t always connect directly to the well-being of wildlife, often because livestock production such an entrenched facet of our system, with many industry and political mechanisms in place to obscure the truth of its real costs.

[I shot most of my cow photos, incidentally, on public lands and along hiking lands in California where such grazing is so common it’s almost invisible. I appreciate cows and their general nature, and I always greet them when we cross paths, even if it’s with a twinge of sadness over the bright yellow or orange ear tags, reminders of their status as commodities.]

The ecological effects of livestock grazing and production can include:

A 2006 report, Livestock’s Long Shadow, from the Farm and Agriculture Organization of the United Nations (FAO) counted livestock as a major threat to the environment and contributing about 18 percent of greenhouse gases. Elements of that report were challenged by animal scientist Frank Mitloehner of UC Davis. His conclusions were used by various members of the livestock industry — one example — to refute the stated impact of livestock production on climate change. In July of this year, Mitloehner was made chairman of a partnership between the FAO and livestock industry groups.

In the same 2006 report, the FAO supported intensification of livestock as the solution (page 36, Livestock’s Long Shadow). Robert Goodland and Jeff Anhang, with World Bank, suggest the FAO report underestimates livestock’s contribution to greenhouse gases, and say the answer lies in reducing livestock production and increasing reforestation. From Some Wise Words About Food Choice and Climate Change:

So the only pragmatic way left to reverse climate change before it’s too late, say World Bank environmental advisor Robert Goodland and his colleague Jeff Anhang, is through large-scale reforestation and regeneration of forest to absorb today’s excess atmospheric carbon –- combined with replacing at least 25% of today’s livestock products with better alternatives (notably, meat substitutes). That way, lots of greenhouse gas emissions attributable to livestock would be significantly reduced at the same time as new trees would sequester excess atmospheric carbon.

Environmental organization Worldwatch Institute published Goodland’s and Anhag’s findings and recommendations in the 2009 document Livestock and Climate Change. Worldwatch also published a summary about meat and the environment in a piece called Is Meat Sustainable? (pdf). One short excerpt:

Fresh water, like land, seemed inexhaustible for most of the first 10 millennia of civilization. So, it didn’t seem to matter how much a cow drank. But a few years ago, water experts calculated that we humans are now taking half the available fresh water on the planet—leaving the other half to be divided among a million or more species….If we break it down, species by species, we find that the heaviest water use is by the animals we raise for meat. One of the easiest ways to reduce demand for water is to reduce the amount of meat we eat.

The United Nations Environmental Programme (UNEP) had this to say in its 2009 report, Assessing the Environmental Impacts of Consumption and Production:

Impacts from agriculture are expected to increase substantially due to population growth, increasing consumption of animal products. Unlike fossil fuels, it is difficult to look for alternatives: people have to eat. A substantial reducation of impacts would only be possible with a substantial worldwide diet change, away from animal products.”

In my various readings, I came upon this talk (video below) given to the Northwest VEG organization by ecologist George Wuerthner who discusses grazing issues, with an admittedly anti-grazing bent. He covers a lot of ground with respect to the environmental costs of livestock production. He talks about the biodiversity and riparian area destruction. Wuerthner has photos to illustrate the contrast between grazed riparian areas and intact zones, some photographed just across a dividing fence line separating grazing from non-grazing areas. He also delves into pollution issues and the reality of predator control (coyotes, prairie dogs) which are all fueled by livestock interests. He shows the wasteland created on refuges when water is diverted away from important habitat and toward irrigation, much of it going to crops used as livestock feed, monocrops which in turn displaced biodiversity.

If my biologist, ecologist or farming friends here have anything to add, please feel free to leave comments. I am always interested in information that will further enhance my understanding of the issues. A number of Wuerthner’s points are reliable in terms of the environmental impact. Clearly, the direct effect on predators and “vermin” animals through ranching and farming depredation services is irrefutable.

As part of a growing chorus of citizens, environmentalists, biologists, wildlife advocates and others, I believe one of the strongest statements we can send in terms of ending these unsustainable practices, is to vote with the dollar and fork, and reduce the demand for products from industries that violate tenets of environmentalism and concern for wildlife and wildlife habitat.

Here’s one excerpt from the last paragraph of the Worldwatch article:

Albert Einstein, who was better known for his physics and math than for his interest in the living world, once said: “Nothing will benefit human health and increase chances of survival of life on Earth as much as the evolution to a vegetarian diet.” We don’t think he was just talking about nutrition. Notice that in this article we haven’t said much at all about the role of meat in nutrition, even though there’s a lot more to talk about than heart disease. Nor have we gone into the ethics of vegetarianism, or of animal rights. The purpose of those omissions is not to brush off those concerns, but to point out that on ecological and economic grounds alone, meat-eating is now a looming problem for humankind. You don’t have to have any conscience at all to know that the age of heavy meat-eating will soon be over as surely as will the age of oil.

Animal Agriculture and the Environment

Animal Agriculture and the Environment from NWVeg.org on Vimeo.