Edited to add (2/17/12): Since I posted this, I’ve had animated discussions with photographers who disagree with my stance on this owl/space/ethics issue. They’ve told me it’s acceptable for photographers to be out in the marshes, as long as they don’t flush the owls. I wanted to find out what the “official” policy was, irrespective of my personal feelings. So, I called the regional office to get their take. The person I spoke with said their policy is that they do not want anyone out there, despite lack of enforcement. The signs are their best effort to discourage this behavior. But, because the land is Provincial, they have no control over that section of habitat itself. The bottom line is — they do not want photographers in the marshes, for the owls’ sake and for the sake of the habitat. They want people to stay on the dike and trail only.

I loved meeting this year’s Snowy Owls. What a privilege to be part of their world for even a short time. In my next writings, I’ll post a few of the photos we took while watching the owls lounge on driftwood perches up at Boundary Bay in British Columbia.

I’m posting these cautionary signs first, so I can explain the situation up at Boundary Bay if you haven’t been. Tune out now if you don’t want to hear one more [minor] rant on wildlife photography. This relates to the video I posted the other day about photographers and Snowy Owls in this area.

Part of the reason it’s taken me this long to go see the Snowies is because I deliberated over whether or not to add myself to the fray of owl watchers. After talking to several people who had been up to Boundary Bay, it sounded like the initial frenzy had subsided and there was a decent balance between viewing the owls and the owls’ personal space. So, on the first predicted sunny day in a week, we mustered the 5am departure and headed for the Peace Arch border crossing.

Once at the park, there’s a dirt lot where you park, then an approach to a dike which overlooks a vast expanse of wetlands toward Boundary Bay. It is a dream of a habitat for shorebirds and for the Northern Harriers who skim the grasslands in search of voles. It’s also the spot some Snowy Owls chose for their wintering rest — part of the Snowy Owl irruption that hit the lower 48 this year.

The terrain reminds me a lot of the wetlands around San Francisco Bay — except for the presence of the 50 or so Bald Eagles we saw throughout the day who were often hunting (and missing) the gulls hanging out in farm trenches. The gulls, unless taken unawares, can outfly the eagles.

The gravel trail where you view the Snowy Owls gives wide berth to the habitat within. There is, however, a large section of driftwood perches and snags where a number of the owls choose to sit, preen and otherwise do Snowy Owl things close to the dike trail. This is the spot where most people hang out and enjoy the spectacle of this year’s irruption.

These two photos give you a sense of place. Hugh shot this first image, using me (bundled up, with hand warmers in my pockets) as foreground. In the second, I’ve pointed out some locations of Snowy Owls on the driftwood. 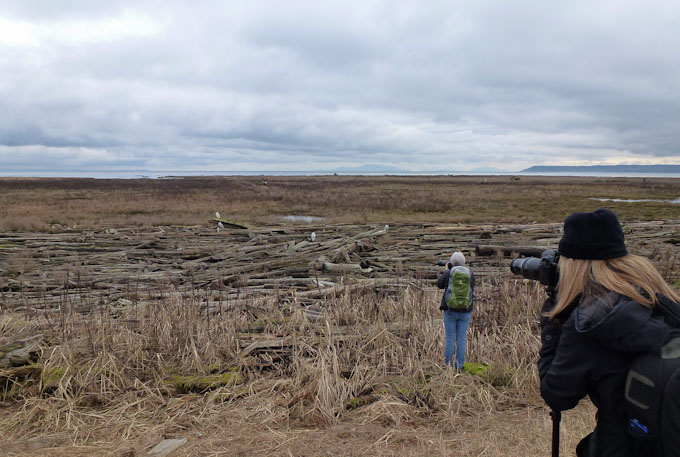 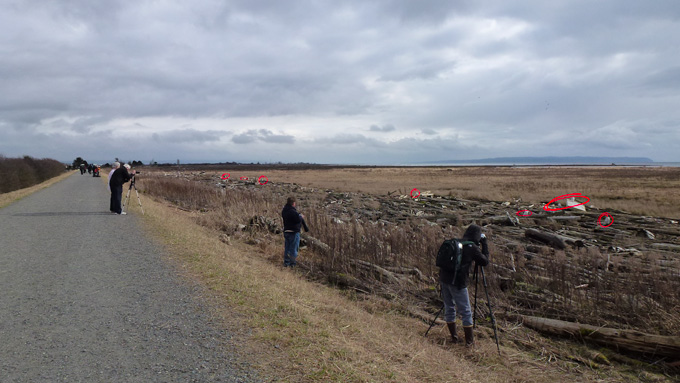 I’m not sure how it was back in December, but by now, the trail is clearly marked with various warnings about staying on the path to avoid harassing or approaching the owls. 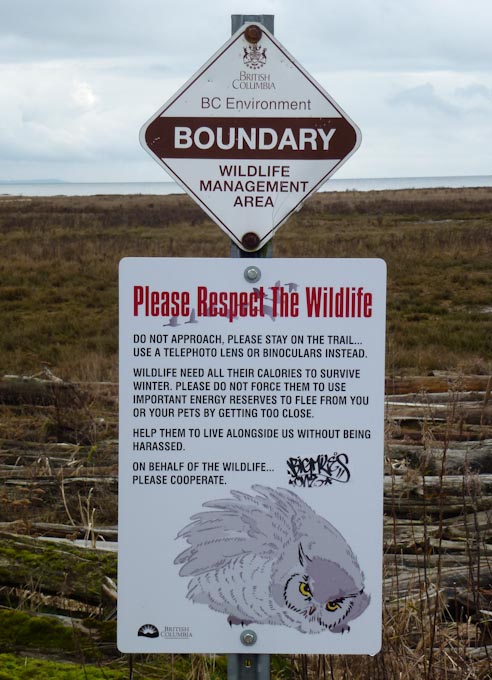 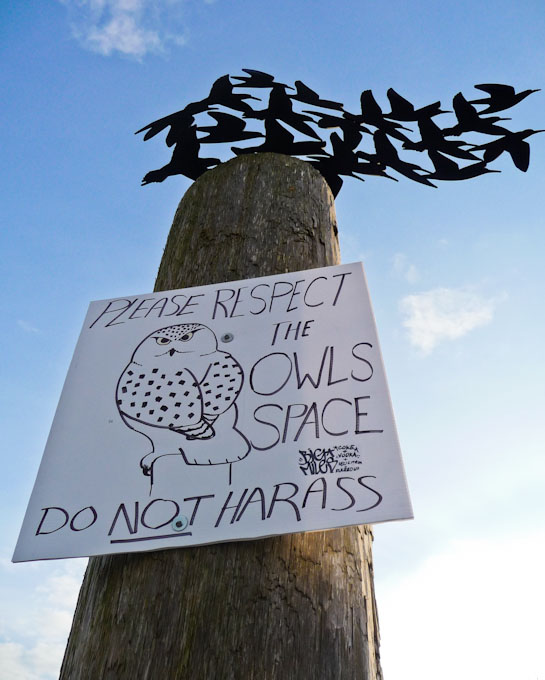 Although most of the amassed birders and photographers respectfully abided by the postings, there were still quite a few photographers out in the field/habitat area throughout the day, venturing closer to the owls for their shots.

Photog in the Marsh – ©ingridtaylar

One photographer (not pictured) flushed an owl while we were there. And when you watch the owls’ reaction through the tele, there are often subtle signs of alert, even if they don’t move in response.

The owls expect people on the paths — those are the normal noises of this world. And even though I understand human presence can cause stress in any context, even on designated pathways, I do believe it’s quite different when they have to respond to lurking threats from unexpected angles and approaches.

We talked with one photographer coming out of the field, reminding him how important it was to stay out of that area and let the owls rest, away from human intrusion. Two owls were recently brought into a nearby rehabilitation center, emaciated, and I was told it’s possible that constant interference is inhibiting their ability to build reserves for the migration home.

This guy said he knew full well that he wasn’t supposed to be out there but he wanted to be closer. Others were too far out into the marsh to reach without distressing the owls ourselves. So, it can feel like a bit of a helpless situation — when you see other photographers approaching too closely, putting the owls on continuous alert — but not being able to do anything about it for fear of causing the same disturbance.

What those photographers don’t realize is that they were also setting a bad example for people out walking who didn’t know any better. I heard one woman say to her husband — “why don’t you go out there for a closeup shot? Those other photographers are out there.” He was a carrying point-and-shoot with no zoom, and thought better of it. But throughout the afternoon, we saw several people with point-and-shoots, creep closer to where the big lenses were.

Most of the photographers in the field were hauling 500mm, 600mm and 800mm lenses, some with teleconverters. It’s not the same as having a birding scope, that’s true. The reach isn’t nearly as far. But they could have easily stayed on the path and still had some beautiful shots with their glass. Of course, the shots from the dike are the shots everyone else gets, so I understand why the photographers are out there. The backgrounds are better from the marsh, and the shots lend themselves to spreads on nature photography sites and in portfolios.

Those images are spectacular. But, I believe there’s another cost to be considered when padding the portfolio, and that is the duress of human pursuit from the wild animal’s perspective. That’s why I personally think the measure of any photograph must include a balance of personal acquisition versus the cost or benefit to the subject, particularly now that there are so many photographers with the gear and the motivation to get that shot. It gets crowded out there.

I’ve looked at some Snowy Owl photos online and there are quite a few which look to be shot in-field. At least one well-known pro took his field group into the marsh for a workshop. I came upon a few such images on Flickr, too, with multiple pages of comments from viewers. I’ve seen similar shots submitted to online birding magazines. Those are the photos that get published and the solution would be for magazines and venues to insist on an ethical standard or baseline when it comes to the images they choose. Short of that, it’s an element of education and respect for wildlife. There will always be people who engage wild animals in utilitarian fashion. But my hope is that as we gain greater proximity through our lenses, the moments themselves — of being, say, with the Snowies on a frost-glazed Canadian day — will be far more important and poignant than getting the representations of those moments on an SD card.