A group of young American Crows or Northwestern Crows (or American-Northwestern hybrid crows) foraged around these cairns along Seattle’s waterfront … like sentries in their own Norman towers. 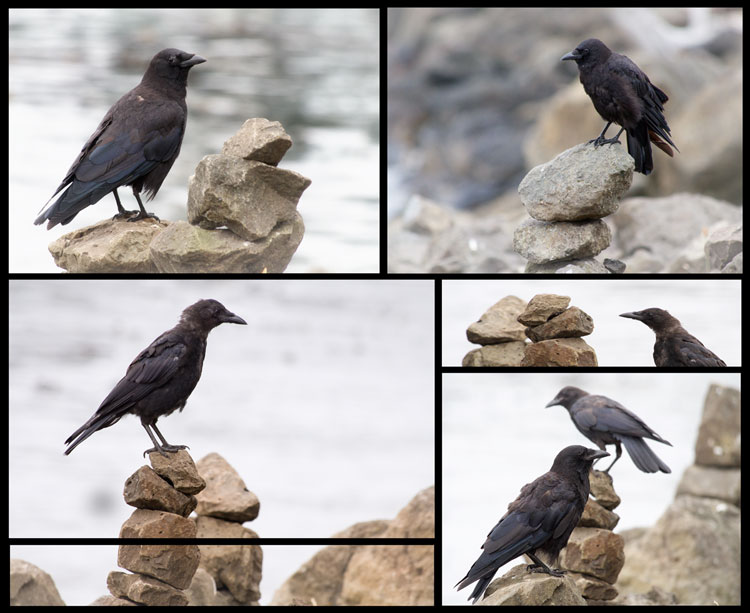 I don’t know if I’m looking at American or Northwestern Crows when I photograph these corvids in Seattle. The distinction for me — and apparently many others — is a bit hazy.

Corey at 10,000 Birds discusses this conundrum in his piece, Crows in the Pacific Northwest: Northwestern, American or Something In Between. He writes:

From the comments at that post, I found my way to this piece at Pacific NW Birder: The Bird That Shouldn’t Be. There, Greg Gilson writes:

… it is apparently only range that separates American Crows and Northwestern Crows. If you are in SE Alaska or the coastal slope of British Columbia and Queen Charlotte and Vancouver Islands, the crows are Northwestern. Inland in British Columbia and the rest of the West, including Oregon and California, they are American Crows. If you are in Puget Sound or on the Olympic Peninsula of Washington, well, then, I guess you can call them whatever you want.

John Marzluff, University of Washington professor and crow researcher, has this to say on the matter in his book In the Company of Crows and Ravens:

These purported differences are also not striking to us. We catch crows together that vary from 10 to 15 ounces … the range of both ‘species.’ We hear nasal and pure throaty calls from a single group of crows — sometimes even in rapid succession from the same individual crow. We have noticed separation of beach and inland crows, but these lines are continually blurred by human settlement and recreation in coastal areas.. … Therefore, our feeling is that although there may once have been a Northwestern Crow that was genetically distinct from the American Crow, that bird no longer exists.

You may recall when the artist Prince, in a record label dispute, changed his name to a symbol, sometimes referred to at that time as “male symbol/female symbol”:

The vague nature of the symbol and its interpretation led to the new moniker, “The artist formerly known as Prince.”

Prince also wrote the lyric, “I got a brand new dance and it’s called The Bird.” And — as a long-time vegetarian/vegan — Prince doesn’t eat anything that “has parents,” which would probably please all birds.

So, using utterly flawed, trickle-down reasoning, from now on I’ll be going with my own ID for these corvids. They’ll be: “The crows formerly known as — or possibly not — Northwestern Crows.”

Now, they just need a symbol.