The earliest spring flowers are like firstborn kids: they pose for photos:

Hugh and I found silence at Sobrante Ridge Regional Preserve, a pocket of an East Bay park, tucked in between subdivisions, under power lines, and with just enough acreage to support a thriving mini-system of plants, endangered Alameda Manzanita, hawks, and Western Bluebirds.

In the distance, you can see plumes of smoke which we later learned came from a huge lumberyard fire in Walnut Creek. A mere figment of smoke is what we saw the morning of the 1991 Oakland firestorm. So, as you might imagine, any plume merits scrutiny.

The Year of Getting Drenched — But It’s Still a Drought

I appreciate spring this year. I didn’t in 2009. Our California sod is parched from recent drought — and the whimsy of a winter that flitted through last year felt like hope lost. Where’s the rain? It hurts to go into another dry season with a deficit of water.

This year, we got rain . . . storms that culminated not only in slightly rising reservoirs, but also some photo ops at the beach. Short showers are still a reality of the life aquatic in California. The California Department of Water Resources predicts more shortages in 2010, based on the currently available stats through January. ** So, I’ve perfected my “Power Shower” and can be in and out in under a minute.

Still . . . all precip helps. At the very least, we’ll have a spectacular wildflower season softening the promise of summer — lollipops of color jutting out from the green. And it is green, every hillside draped in peacock velvet.

Why Poppies Remind Me of David Lynch

The early birds and buds are out, the most vivid being the California Poppy — orange missiles in silos of green that, when taken medicinally, will sedate you into a dreamscape. The sudden appearance of poppies in February always reminds me of an interview I saw with the awesome David Lynch (“awesome” as its meant to be defined) — and Elvis Mitchell, when Elvis had his IFC show. (I searched in vain for a video clip, alas, it’s been sucked into a secret archive.) Mitchell asked Lynch that question — the one artists and writers just love to be asked: so, where do you get your ideas? Lynch answered (I’m paraphrasing): one minute you’re sitting there without an idea. And the next minute, there’s an idea.

A perfect summation of an inexplicable process.

So, that’s how it is with me and the poppies. One day they’re not there. The next day they are. And all of the cellular machinations which brought them to be are incidental to the fact that they portend of more poppies and fields of lollipops . . . and deceptively serene suburban fields where one might just find a severed ear.

My hikes with Hugh are, as I’ve said before, not so much hikes as they are photographic expeditions — and not so much photographic expeditions as they are hikes with cameras. It’s a true crisis of purpose wherein the drive is to get exercise and a few salvageable RAW files. Hugh’s device of choice is the iPhone, facilitator of instant gratification and Schmapping. Here he is, stopping for an iPhone snap of a trail-side poppy. I don’t always know when he stops, and yesterday, I looked back to see him crumpled on the ground. “Oh my god, are you okay?” His typical response, “What? I’m just taking a macro.” Hugh will contort himself like a newt ball in order to get the shot. Then he said, “You’re just worried I’m dead and you’ll be living in a car with a cat and no wi-fi.” (I’m a writer, what can I say. There’s a pragmatism involved in being in one of the lowest paid professions.) 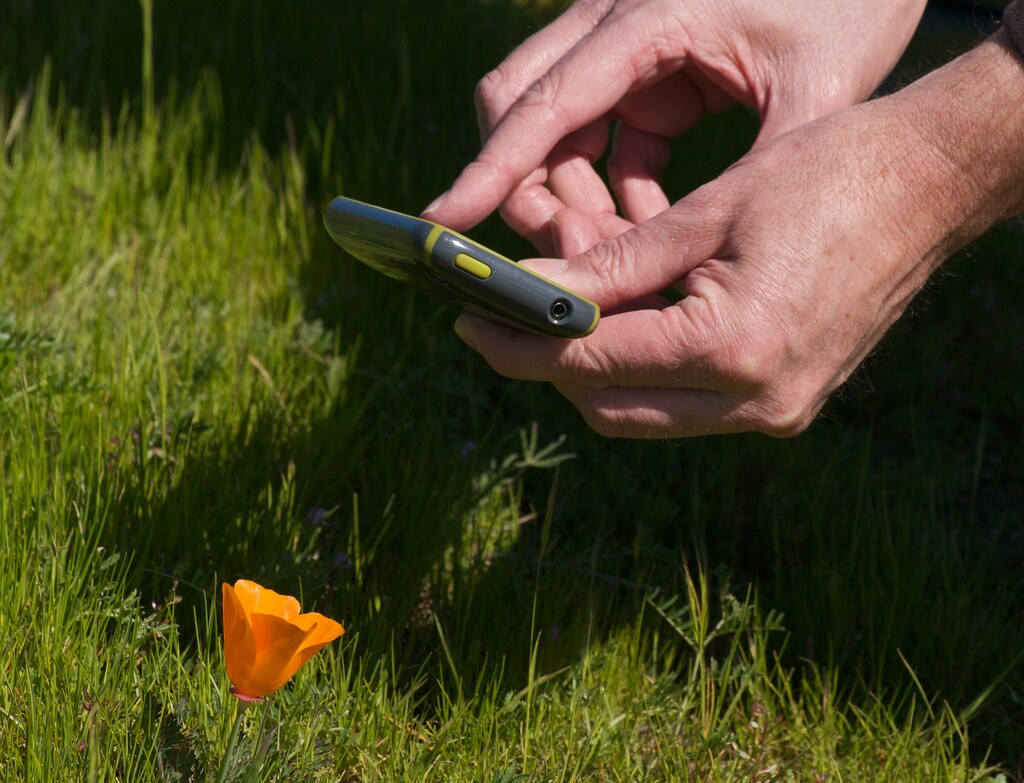 A few more poppy shots for the spring record:

Wish I knew which bug I’m documenting. If you know, drop me a line in the comments.

** (You can compare water levels from 2006, the year preceding the drought, by checking out the bar charts in California’s Drought Update (pdf)).

The Photos: We lucked out with the blue butterfly posing on the poppy. She wasn’t there for long — and she didn’t stick around to open her wings for a full view of coloration. I like the spears left behind when poppies lose their petals. And I happened to catch this Damselfly also admiring the post-petal anatomy.