I just received a record album in the mail. It’s an EP (German label) with this avian hipster on the cover … Clive the Racing Pigeon in his best Blue-Note-Records pose. 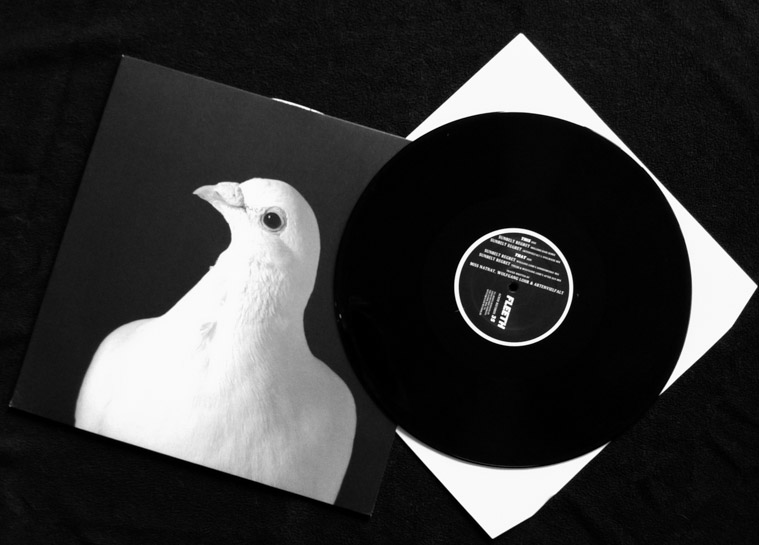 We cared for and loved little Clive — a lost and unwanted racing pigeon. Clive was in a local animal shelter with a flesh injury when we first met him. His cage label said “Snowflake” and his cage card detailed his his wound treatment and his meds. 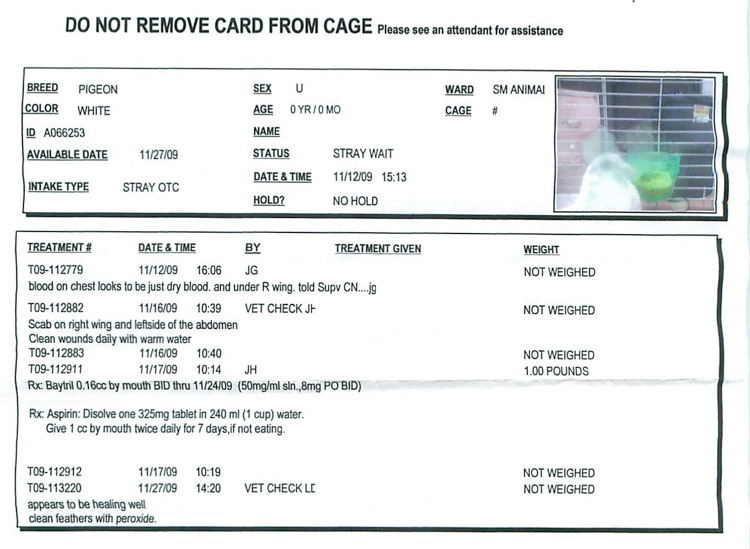 The shelter had contacted our friend at MickaCoo Pigeon and Dove Rescue in San Francisco, looking for possible rescue or placement. We picked up “Snowflake” from the shelter with the expectation that his owner wouldn’t want “damaged” and injured “goods” returned. That’s often the case in a sport where a hard, utilitarian ethic still persists. And here was Snowflake, who not only didn’t place in a race, he didn’t even make it home. He was a hawk-strike victim and a potential veterinary and financial liability.

When I tracked down the club through Snowflake’s band number and told the owner where the pigeon could be retrieved, the man told me, “no, it would cost me more to pick up that pigeon than he’s worth.” Had I offered to return the pigeon myself to a man who professed this lack of regard for the bird, Snowflake’s future would most likely have been sealed in a quick kill or cull. So, we took him into our humble, urban digs. (I later found a Craig’s List ad by this same owner, selling similar white racing pigeons for ten dollars.)

We hoped that Snowflake would befriend a 10-year-old racer we’d rescued a few months prior — Chauncey, so named after Chauncey Gardiner, our cinematic allusion to displacement. It took just a day for us to realize that Snowflake wasn’t a snowflake at all in temperament — he was robust and assertive, and we thought he’d be better suited to a manly designation. We started with Clyde for its rhythm (“Chauncey and Clyde”), but Clyde soon morphed into Clive. It also didn’t take long for Chauncey to reveal that “he” was a “she” — when she hooked up with this stunning white racer who was nine years her junior. 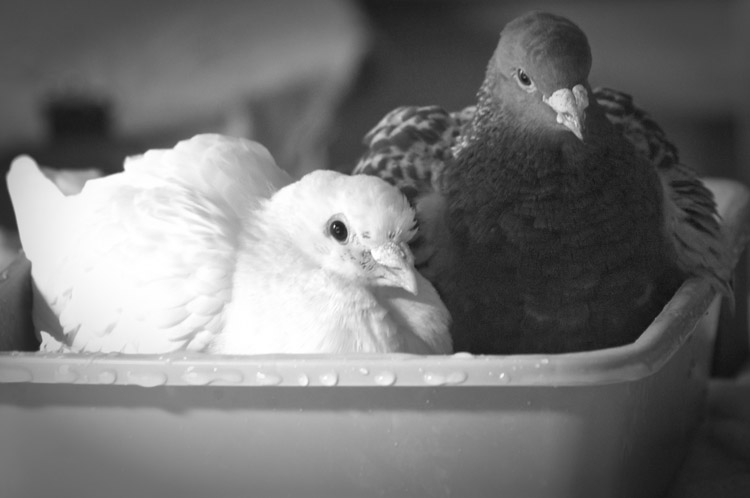 After some weeks, Clive’s hawk injury healed to perfection, with no visible disability or flight impairment. In fact, when we’d take Chauncey and Clive to the vet, the doctor always remarked on how beautiful and muscular both birds were. They were built to fly — fast and far. Young Clive had the energy of a thoroughbred. We had their racing bands removed and I swear, from all of the preening and leg lifting they did, it must have felt like the weight of a lifetime disappeared from their ankles.

Clive never left Chauncey’s side except to retrieve sticks for his nest building, an activity he undertook with fervor. These two birds remained bonded until Chauncey died from cancer earlier this year. 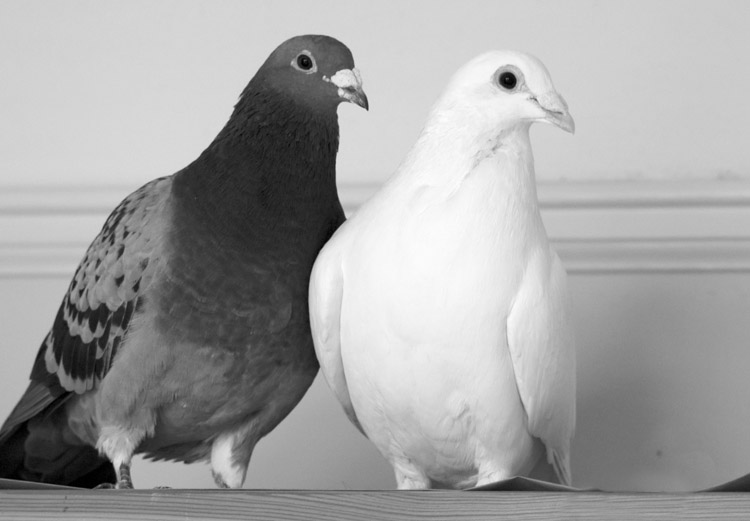 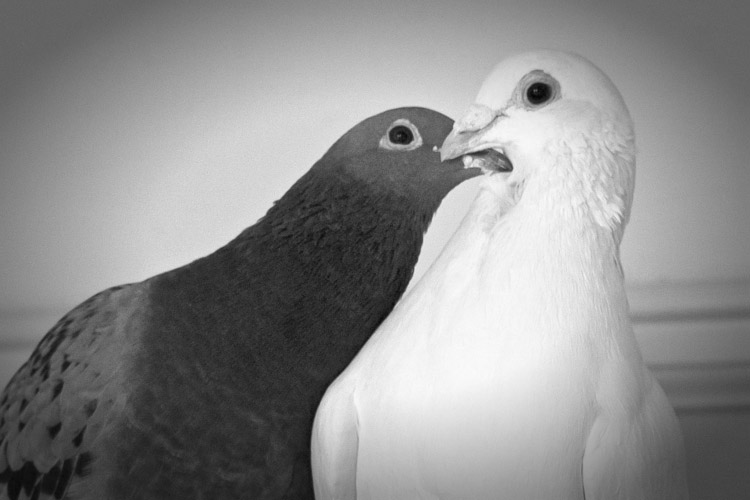 Someday, I will write the story of how profoundly altered I was by this association … how my life intertwined with theirs in such a way that I became a different human being — from my cells into my outward consciousness. And, then, how I dripped tears into my tea for weeks and months after we retired them to a gorgeous new home. It was a significant upgrade from their indoor life in our place, in a huge aviary that more resembled a magical forest than it did any enclosure.

My heart still aches a bit every time I look at photos of Chauncey and Clive, even though it seems like a long time ago now that I draped a black cloth behind Clive’s perch and photographed that catch light in his eye. I still miss them, even a few years later. I’d forgotten that Acker Records requested usage of this image for a music project. So, when I cut open this brown cardboard envelope, I had no idea what I would find inside. I was — honestly — overcome. I told Hugh this is probably the most interesting outcome of any photo I’ve sold or licensed. Each album in this series of dance/electronica music features black-and-white animal photos. And, Clive now graces the cover of the EP “Fleeth” with tracks by Miss Natnat, Wolfgang Lohr and Artenvielfalt … in pose and picture that made me think of old Blue Note Records covers. It made me glad we decided to name him Clive. “Snowflake” just wouldn’t be the same.

I cannot adequately express how lovely these birds are — domestic pigeons of all types. If you have the space and ever have the inclination to give a few rescued birds an aviary home, they will endear you with their gentleness, their intelligence and their beauty. MickaCoo Pigeon and Dove Rescue, a dedicated organization that literally saved us from desperation when we didn’t know how to care for these birds, always has pigeons and doves available for adoption. They always need foster homes and other assistance. In the interest of full disclosure … I’m now a member and supporter of MickaCoo, and we plan to someday permanently adopt more birds in need. But, my organizational affiliation has no bearing on my personal feelings about pigeons. That all comes from life with Chauncey and Clive, two of our Zen teachers.