I don’t usually ignore visual anomalies. They bring me to interesting things.

On this Berkeley day, something seemed out of place — that nagging oddity in my periphery. I turned and looked closer in the mud. Sure enough, there was an unusual outline in the creek bed.

As quickly as I noticed the frog, it dove into the mud. There is a frog in the photo below, concealed in the sludge:

I found a place to sit, behind some flowering Yarrow. After a few minutes, the frog peered out of its bath of mud. It was an American Bullfrog with its citrine eyes and green mug:

I posted the above image on Flickr and referred to the bullfrog as a “he,” offering the following distinction:

On female bullfrogs the tympanum (eardrum) is the same size or smaller than the eye socket. Male bullfrog tympanums are much larger filling most of the distance to their eyes.

So, this beautiful “she” watched me for a while. When I’d move my lens, her eyes followed. I set my camera down and just enjoyed the simplicity of the moment.

My head was, literally, framed by nectar plants, so honeybees and bumblebees scraped my cheek and hair.

This Buckeye Butterfly tolerated me for a few captures: 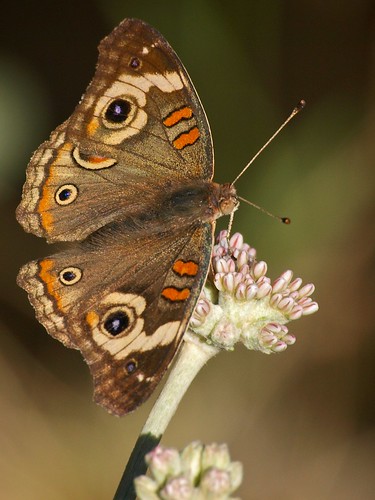 And then, perhaps satisfied that I was no threat — or maybe not thinking of me at all — the bullfrog emerged in full. 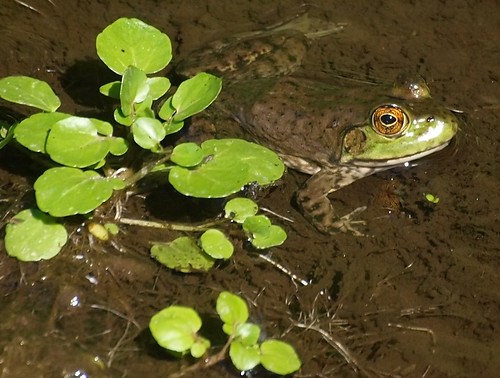 I left her alone to enjoy the last of the day’s solar heat.

And check out EcoSnake for some insights and information on the world’s reptiles and amphibians.