In springtime every year, Grays Harbor National Wildlife Refuge in Washington State becomes a haven for hundreds of thousands of shorebirds making their way north to breeding grounds. For a few weeks in late April and early May, enormous flocks settle on the mud flats of the Refuge, feeding and restoring themselves in the midst of their long migration.

The Grays Harbor Shorebird Festival celebrates the birds’ return every year, and gives Refuge visitors an opportunity to view, photograph, and learn about the shorebird migration with the help of onsite volunteers. Grays Harbor NWR is one of four major staging areas for shorebirds as they travel the flyways, with some birds winging distances as grand as 15,000 miles on a round trip. Shorebirds travel back south from July to September, but their departures are staggered so they don’t arrive at the Refuge in the same numbers during the Fall.

In April, I made my first visit to the Shorebird Festival, on a day when the sky was slate and a persistent mist speckled my lens. The Refuge is a two-hour drive southwest from Seattle toward the Pacific Ocean, on the western edge of Hoquiam — a town with long commercial ties to the area’s forests. Before the timber industry emerged in the region, Grays Harbor County was home to the indigenous peoples of the Hoquiam, Quinalt, Humptulips, Wynoochee and Chehalis tribes, all of whom found abundant sustenance on this land. Hoqiuam’s complex history is described in much more detail in this HistoryLink piece. You can also visit Polson Museum while you’re in Hoquiam, located on two acres of park with collections related Grays Harbor history. 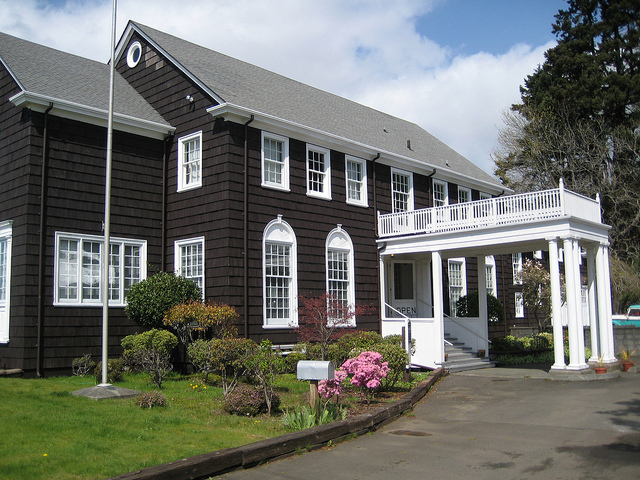 After passing through Hoquiam, we traveled Highway 109 for a little more than a mile before turning left on Paulson Road toward the Refuge. 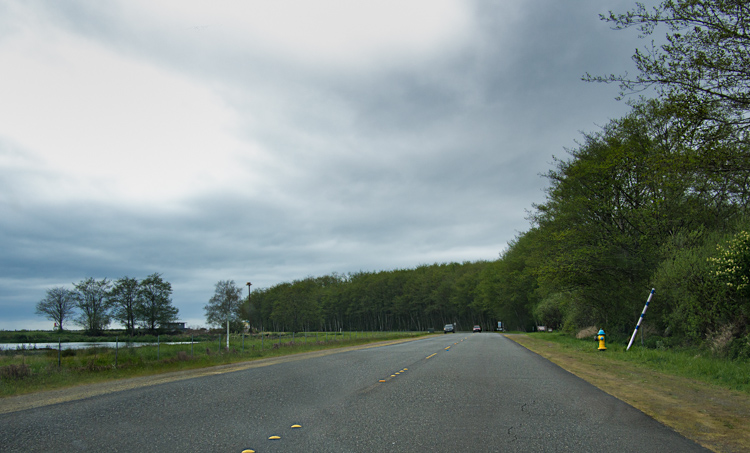 Before reaching the Refuge parking area, we passed the Hoquiam Sewage Treatment Ponds on the left. According to Grays Harbor Audubon Society, the winter species you can see at the ponds include Buffleheads, Ruddy Ducks, scaup, Ring-necked Ducks, Northern Shovelers, Canvasbacks, Mallards, Marsh Wrens, Canada Geese, and Rough-legged Hawks. On this sopping spring day (from the road) we saw gulls, scaup, swallows, Mallards, Gadwalls, and a colony of Caspian Terns, tiny in the distance, collected on the pond dikes. 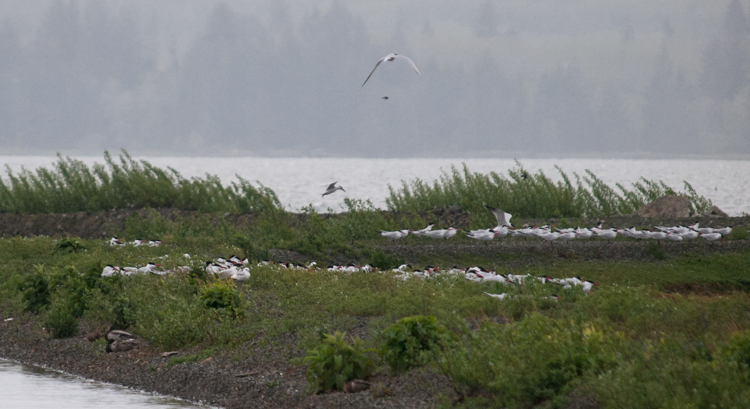 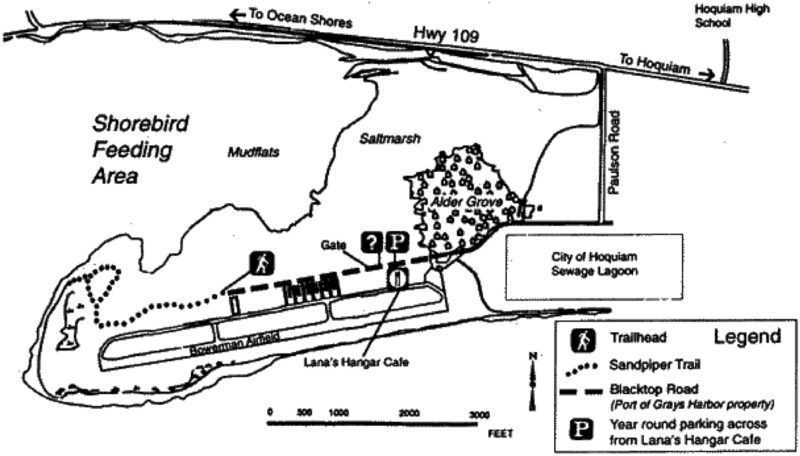 There is no entrance fee at Grays Harbor NWR — an incredible gift to the public when you consider how critical the Refuge is to shorebirds in particular. The Refuge was established in 1988 on the Grays Harbor estuary and includes 1500 acres of intertidal mudflats, salt marsh and adjacent uplands. Grays Harbor is one of six major estuary systems on the Pacific Coast and, according to the website the Refuge’s mudflats are the last areas in Grays Harbor to be flooded at high tide, the first areas to be exposed as the tide recedes. This gives shorebirds more time to feed as they follow the water line.

Once we arrived at the gate and parked near Bowerman Field, the regional airport, we passed Lana’s Hangar Cafe on the left. From there, it’s a casual stroll on a paved path, past airport hangars and the runway, until you reach the 1,800-foot boardwalk known as the Sandpiper Trail. If you plan ahead during the Festival weekend, you can join various field trips (they get booked up). But if you head out spontaneously during Festival weekend as we did that day, you still have the benefit of shorebird views and volunteers at the viewing spot who can answer questions. 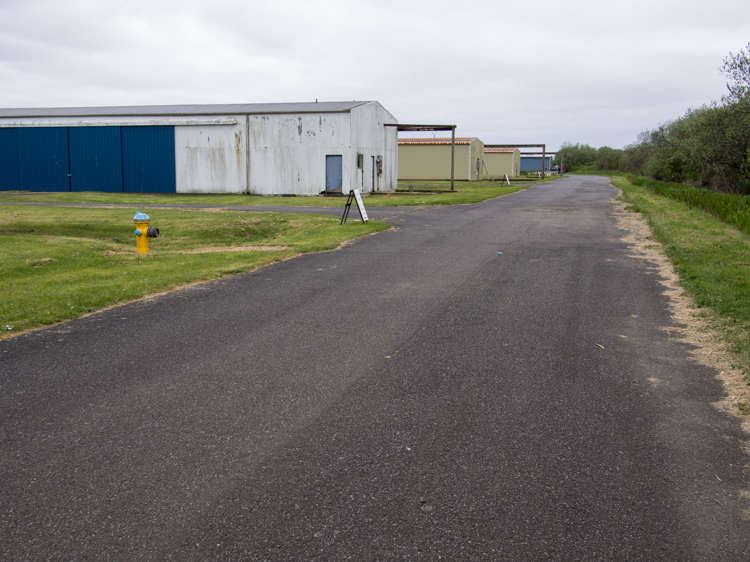 The boardwalk has pleasing bends in the road, which makes for meditative trek across the terrain. 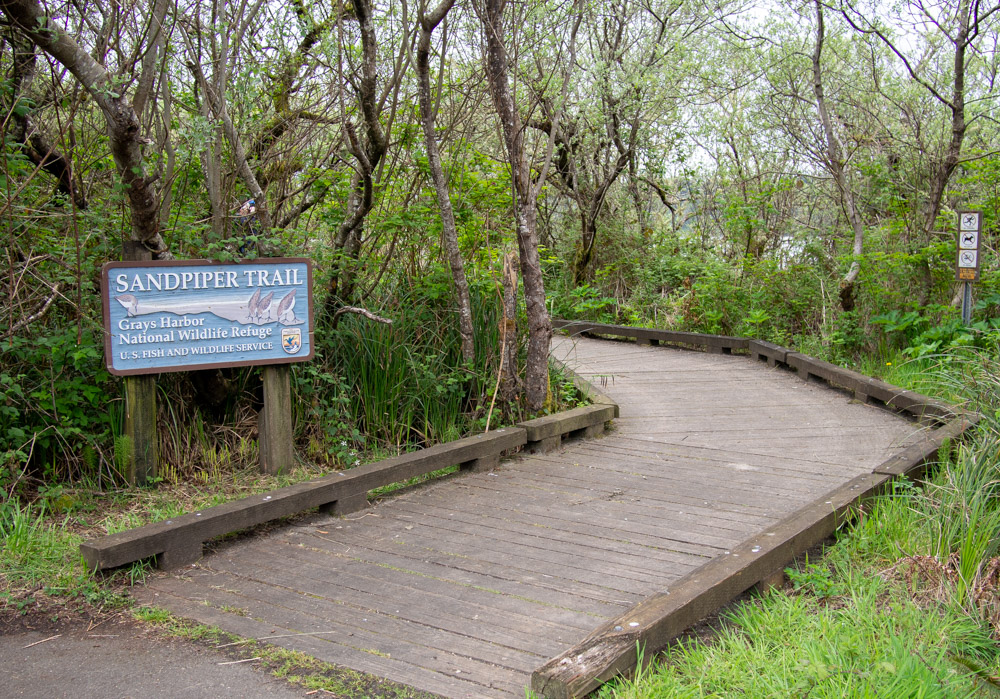 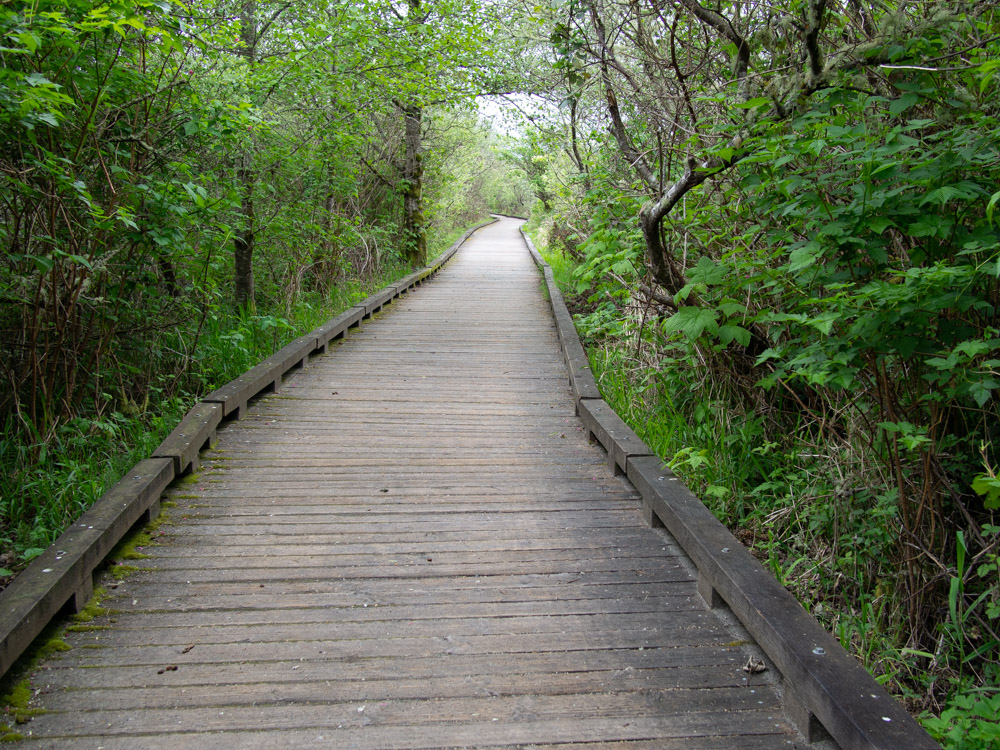 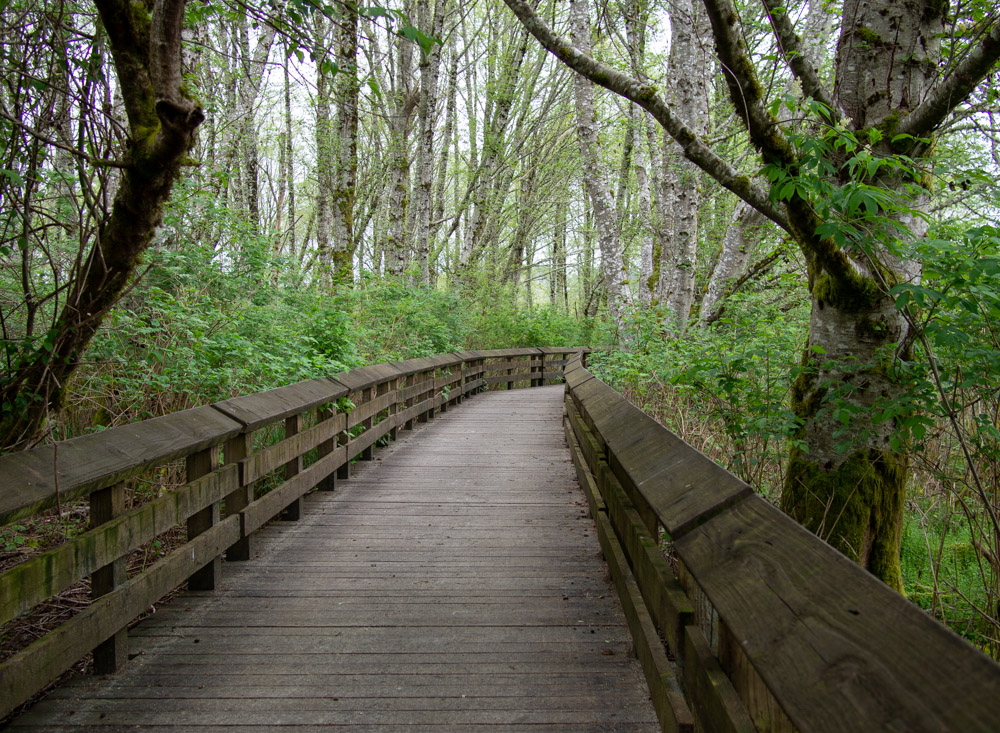 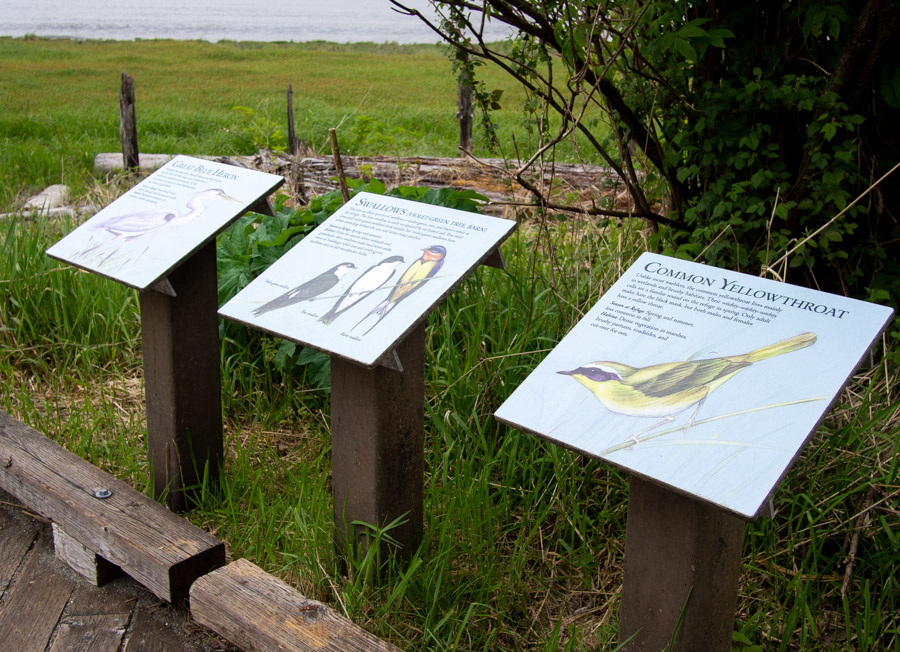 Then we rounded the last bend, with boardwalk planks stretching out into the estuary. 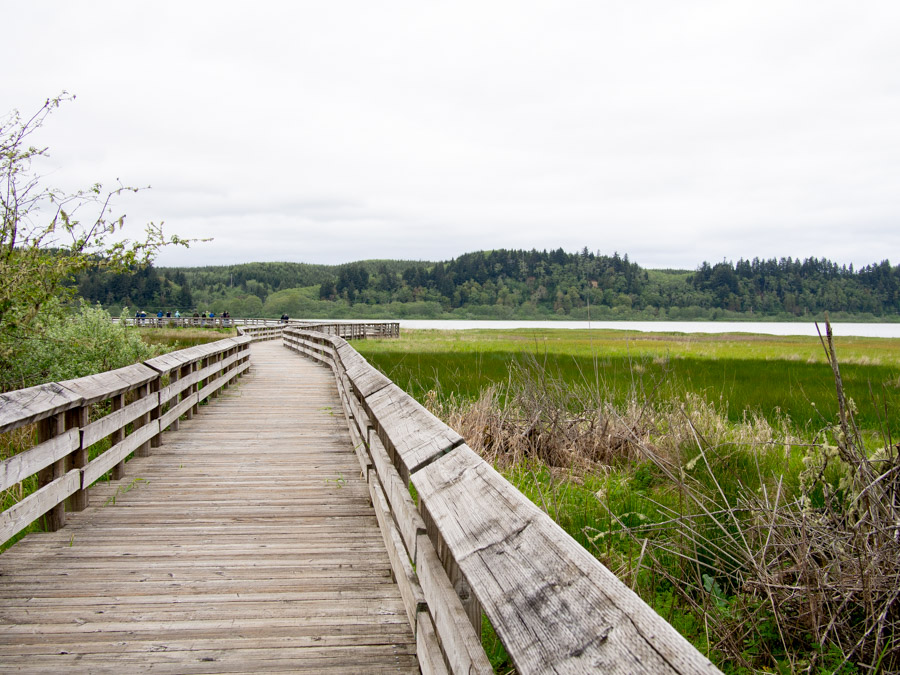 We heard the murmurs first … then the patter of shorebird wings so small and fast they sound like rattling beads and shells.

Dipping bills into the mud or periodically flushing to fill the air with their changeable colors, the flocks are composed of thousands or tens of thousands of birds. They generally include Western Sandpipers and Dunlin which constitute the largest percentage of shorebirds in the spring.  The view may also include Short-billed and Long-billed Dowitchers, Semipalmated Plovers and Black-belled Plovers, Red Knots, and Least Sandpipers. 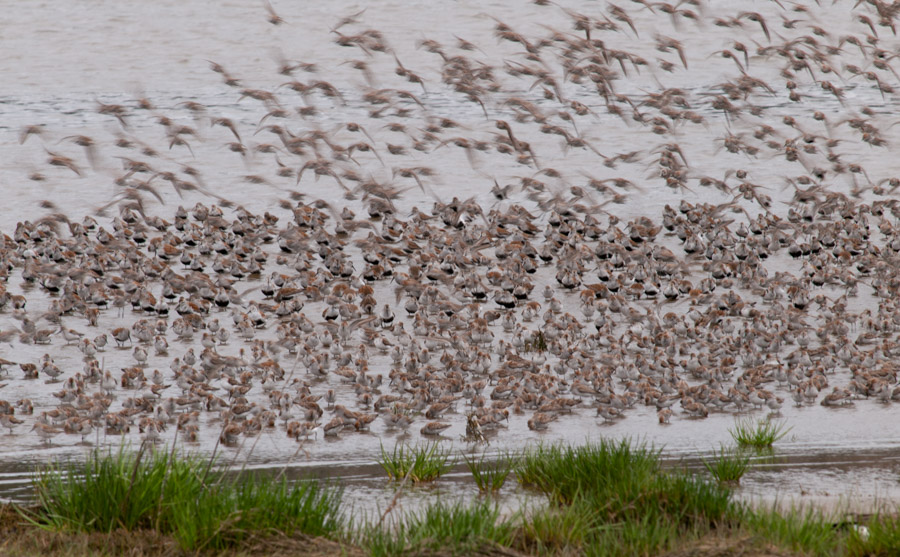 At the viewing platform, there are benches and places to set up scopes and tripods, or simply have a look over the muddy expanse. 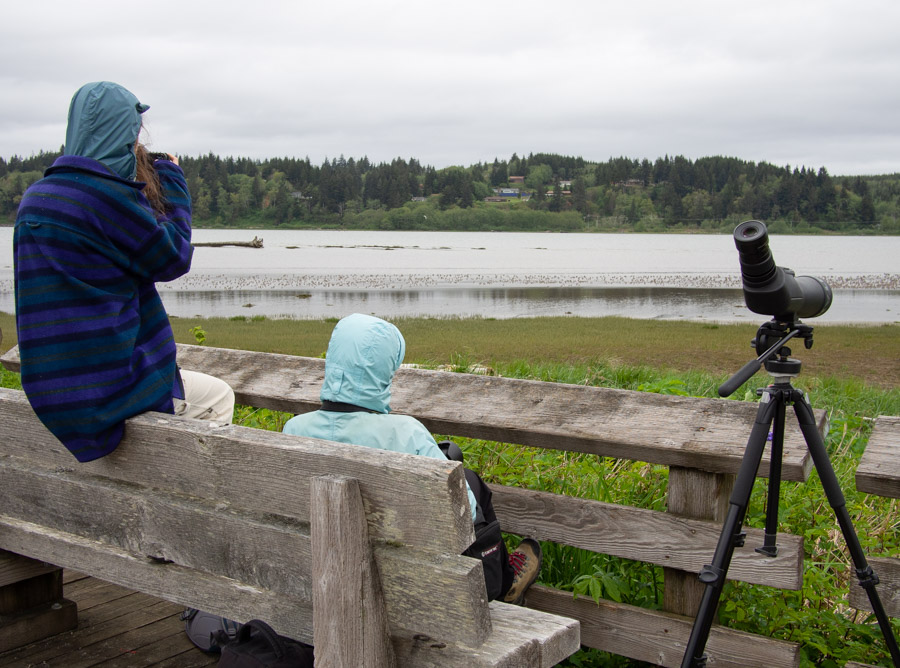 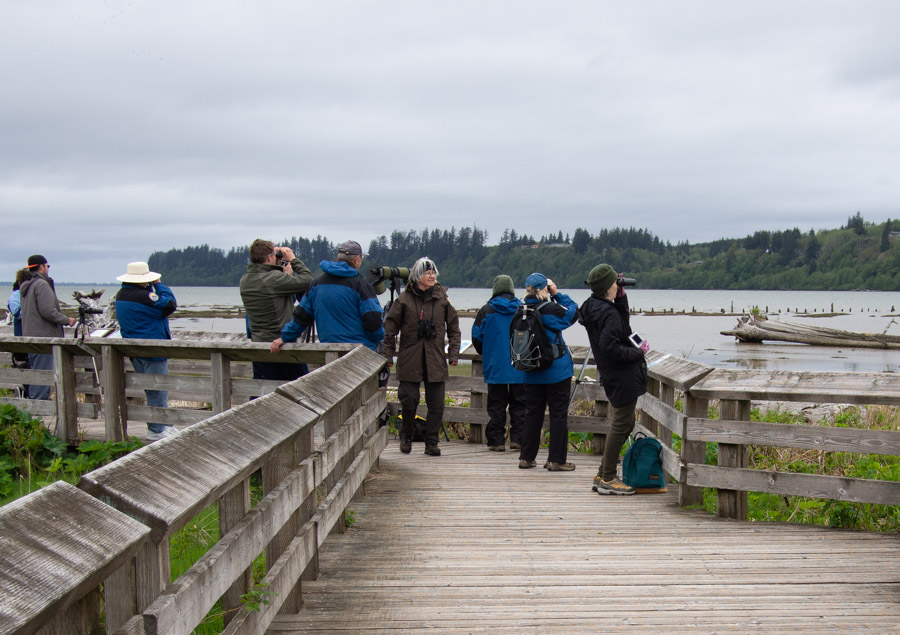 I snapped a few shots of feeding and flying shorebirds, then realized that the darkness of the drizzle was more conducive to slow-action images — at which point I switched to deliberate blurs of shorebird wings.

I asked a volunteer what his estimate was of shorebird numbers that day. The previous afternoon, they counted approximately 30,000 shorebirds on the flats. He did a scan of the scene and told me he thought there were probably 15,000 or so shorebirds scattered across the low-tide marsh in front of us.

On the way back down the boardwalk, another photographer clued us in to a Long-tailed weasel sighting. He smiled and told us to get our cameras ready.

About halfway back, sure enough, a Long-tailed weasel came traipsing down the planks toward us. In her mouth, she carried one of her kits. 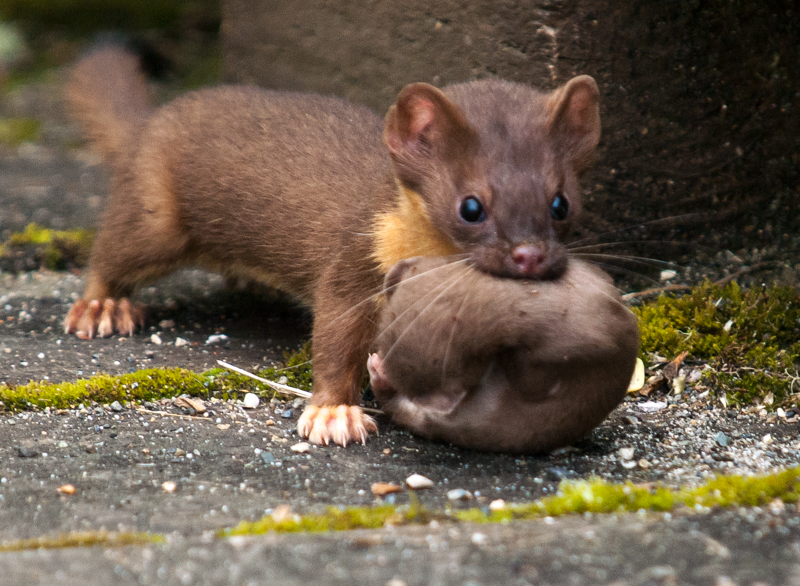 The weasel was in the process of moving the whole family from one den to another. I don’t know how many babies were moved in sum, but we saw four such transports as we sat along the boardwalk. The weasel showed little trepidation around us, and skittered past our toes as she completed her mission.

We almost stopped in Lana’s Hangar Cafe and regret not doing so. The light was welcoming and we could see a few cups of steaming coffee as we walked by. But, I had it in my head and heart to finish the trip at Ocean Shores and to touch the Pacific Ocean. We headed out, on the off chance the rain would abate and we could grab a few sightings of shorebirds on the beach. Alas, the rain never let up and, in fact, it thickened. I managed a couple of faraway shots of the shorebirds and the storm before retreating to the car, soaked, muddy and thinking about that coffee at Lana’s.

Directions: From Hoquiam, head west on Hwy 109, then turn left on Paulson Road and right on Airport Way

Every year in late April, exact dates depend on tides