Hugh and I just got our initial Hazwoper certification — a Federal OSHA requirement if we want to assist with bird rescue in oil spill areas. That, combined with a wildlife rescue training course we took back in March, will at least put us on the call list during catastrophic wildlife events.

During the Cosco Busan spill in November 2008, our participation was limited to non-exclusion areas. I volunteered with a survey team to spot and report oiled birds near shorelines, for transport to IBRRC. Now we actually have a reason to wear that powder-blue (or yellow) Hazmat number.

This oiled and land-bound American Coot, one of hundreds we spotted, had a dedicated East Bay Parks official helping him out:

Our Hazwoper training is at the base level, so you won’t see us in Level-A, fully-encapsulated hazmat gear. But passing the test did qualify us to know a few things about hazardous material operations:

If all of that sounds passive and evasive, well, it is. We’re low in the Hazwoper hierarchy which, depending on how you feel about chemical exposure, is a great thing or a massive disappointment. We don’t show up until after the precarious work is done . . . after the guys with oxygen lines and impermeable hazmat suits determine that the air and environment are at safe levels for the rest of us. And until that “site characterization” is clear, it’s Upwind, Upslope and Upstream.

Of course, before even the first responders arrive, the wildlife of the area gets to sample the toxicity of the spill — without SCBA and chemical-proof suits. Considering how little it takes of some volatile substances to wreak havoc with a living, breathing organism, the birds and mammals in the stream are most often the first casualties of any such event.

Which is precisely why we jumped at the chance to get this training and master even one more skill that might help when the going is hopelessly rough for our non-human pals. Of course, you always hope that the last spill was truly the last. 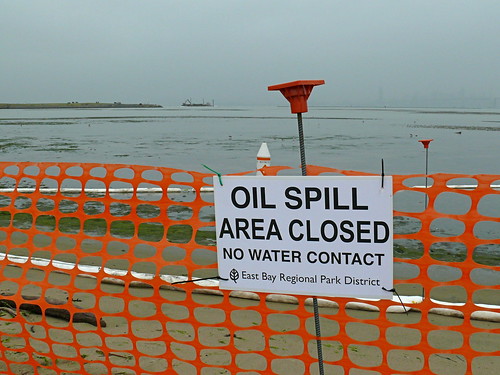 I spotted and reported this grebe (photo below) at Emeryville Marina, preening frantically — one of the signs we looked for during the Cosco Busan rescue operations. Although images like this aren’t as visually horrifying as those of birds literally dripping with crude oil, the effect on the bird is basically the same if the bird doesn’t get help: ultimately the bird will die. 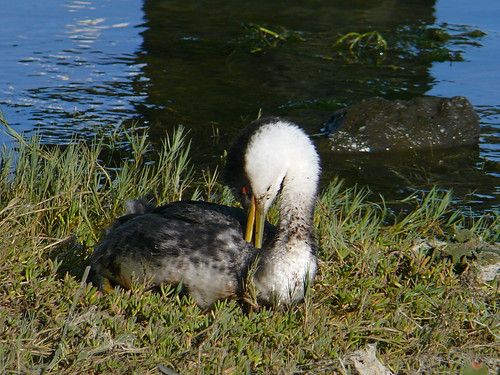 The best analogy you hear to describe the effect of oil on a bird’s feathers is the “wet suit” example. The feathers lay in such a way that they form a wetsuit-like layer of protection for birds, which is why they can withstand seemingly impossible temperatures in frigid waters. It’s why you’ll see healthy, normal birds meticulously preening. They’re fixing their feather positions so that the feathers lie in perfect formation, to function as they’re supposed to function.

Owing to this wetsuit effect, even a small spot of oil on the feathers disturbs the insulating effect. It’s the equivalent of having a hole in a wetsuit. So not only do birds succumb to the toxicity of the oil, even small amounts will ultimately lead to hypothermia and starvation.

The IBRRC website has a thorough description of the oil-on-feathers effect.