This was my last shot of the night. Under a California sky, I saw my favorite silhouettes on approach … those pterodactyl forms, Brown Pelicans, gliding past the fallen sun. Knowing I would get just the barest outline of a pelican, I raised my lens anyway, finding it impossible not to photograph these big birds I miss so much up here in the Northwest.

As I focused on the last pelican to fly overhead, I saw a large object dangling from its pouch. I feared it was precisely what this photograph shows it to be: a triple-hook fishing lure stuck in the pelican’s pouch, with a trailing line of monofilament visible in the bottom right corner of the image. 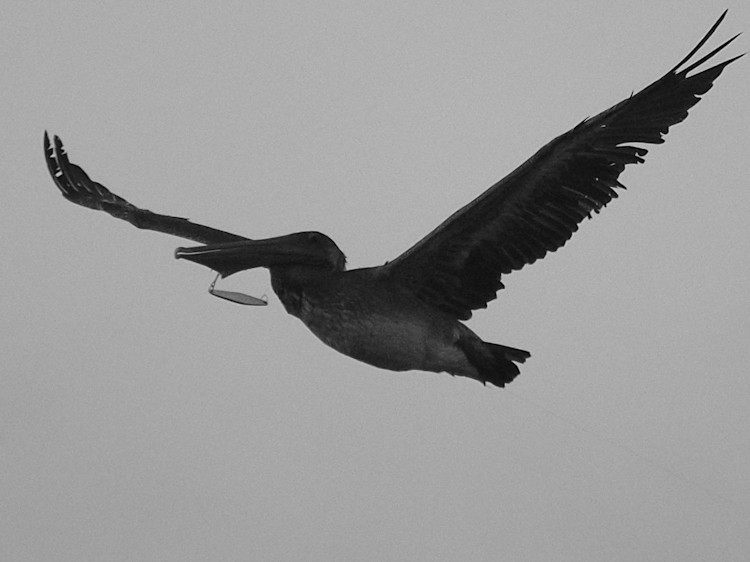 The pelican could fly well and high, and — short of an Ultralight aircraft on demand — there was no way reach the oceanic swells where he and his mates dissolved into the horizon. If the pelican gets too weak to fly, there is a chance for rescue … if he’s lucky enough to be found by the right people.

You’ve likely seen photos of Albatross carcasses, their bellies full of plastic trash. International Bird Rescue in California regularly takes in sea birds who’ve ingested fishing hooks, plastics, shotgun pellets and other human-contrived hazards that cause immense suffering and death for these animals. A lot of people encounter gulls or other birds with monofilament wrapped around their feet. Hugh and I often find and dispose of potential bird entanglements — like this mass of fishing hooks and filament we found on a Bay Area beach: 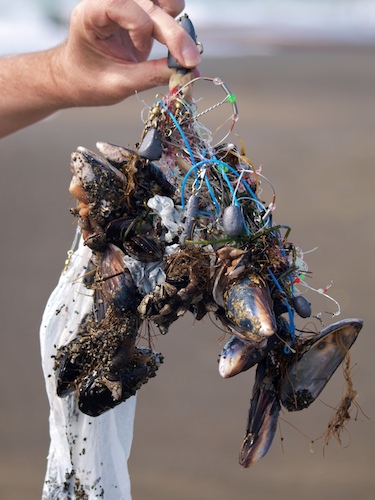 At an Emeryville fishing pier, I once found a series of hooks baited with large pieces of fish that concealed the hook. The hook tips were then stuck, deliberately and meticulously, into a wooden railing. To any passing gull or bird, they would have looked like a fast-food meal.

Even without aforethought and malice, marine debris is a significant hazard for sea birds — from commercial and recreational fishing gear, to the sea of wayward plastic we’ve come to know as the Great Pacific Garbage Patch (see video below). According to the California Coastal Commission, fishing monofilament can remain in the environment for 600 years. The Coastal Commission cites these additional figures:

“A recent study found an average of 334,271 pieces of plastic per square mile in the North Pacific Central Gyre, which serves as a natural eddy system to concentrate material.1 Results of more than 10 years of volunteer beach cleanup data indicate that 60 to 80 percent of beach debris comes from land-based sources. And debris in the marine environment means hazards for animals and humans. Plastic marine debris affects at least 267 species worldwide, including 86 percent of all sea turtle species, 44 percent of all sea bird species, and 43 percent of marine mammal species.”

The International Bird Rescue blog noted a study which showed that more than “30% of the animals harmed by fish hooks and entangled fishing line were Brown Pelicans” and that “pelican injuries caused by fishing gear were most common in the Monterey Bay region, where 59.6% of the pelicans rescued and admitted to a rehabilitation center were injured by fishing gear over the 6-yr period.” 1

States like Washington, where I currently live, are involved in derelict fishing gear removal projects, where the larger problems like derelict gill nets and crab pots are spotted, reported and removed from Puget Sound. These marine debris efforts are happening on national and international levels as well (see NOAA’s Marine Debris Program for more info). Many localities are also working to reduce monofilament (fishing line) waste by implementing disposal programs similar to this recycling and recovery program in Florida.

The California Coastal Commission has advice for properly stashing trash so that it doesn’t end up in the stomach of an Albatross … or in the pouch of a Brown Pelican. You can get more information at the CCC website, but some of the points are:

==> Also … check out the 5Gyres website for information on reducing our personal plastic debris trail.