Home|Uncategorized|Seeing the Sora
Previous Next

You’ll hear Soras more often than you’ll see them. But once in a while you’ll be lucky enough to experience both — when the characteristic Sora call precedes a visual of the Sora wading through the shallows. Soras are in the rail family, not rare, even if they are elusive. They share a lineage with the endangered California Clapper Rail (among other birds in the family Rallidae).

Coyote Hills, with its drought-driven mud cracks and seasonal sea monsters exemplifies both the thriving and the dying ends of the spectrum. In September, thirsting from a summer without rain or diverted water, the marshes dry into mud pies and whiffs of sulfur. The south ponds, which sustain huge populations of migrating ducks and shorebirds through the winter, harbor just the occasional mallard or song sparrow, dipping for morsels in the cracks. 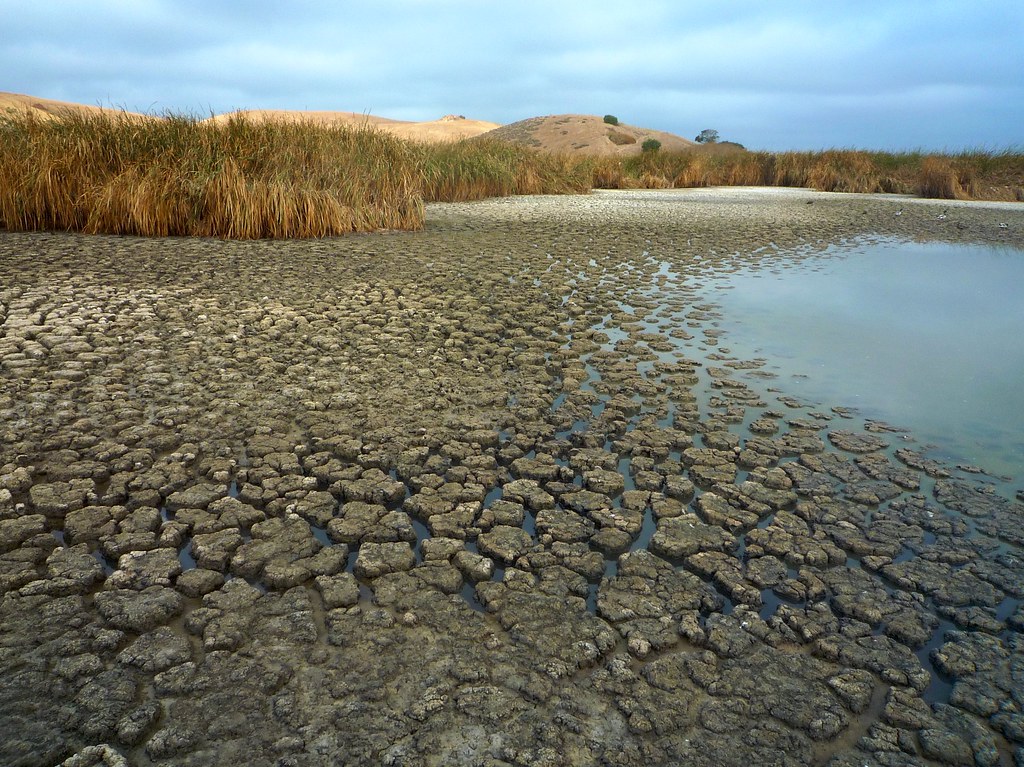 And, among the reeds, where the carp swam just a couple of months ago, and where the water level now barely covers a Sora’s knees, we saw glimpses of a rail (Clapper or Virginia, not sure) and two telltale yellow bills of Soras meandering through the stalks. They weren’t particularly skittish, but not bold enough either to come close and fill my frame. All of these Sora shots are heavily cropped.

Overhead, the silence was shattered by jet fighters . . . or rather, Northern Shovelers in steep descent. They made their final approach to the north pond without so much as a flap, and with the wind whooshing over their wings with such force it sounded like a jet above the clouds.

The north pond, in contrast, was thriving. And flooded not just with water, but with hundreds of American White Pelicans and the arriving Northern Shovelers (by the flock-load).

The chattering of various shorebirds faded as we rounded the southern bend of the trail and disappeared into different terrain altogether, marked by Bay winds and the upward spirals of vultures and Red-tailed Hawks riding the thermals.