The Goldfinch and Thistle (A Pub With No Pints)

The Goldfinch and Thistle (A Pub With No Pints)

The Bay Area has a thistle problem, or so we hear, but goldfinches weren’t complaining on our hike yesterday.

And a few photos taken in Briones, where ongoing eradication has taken out bunches of the Artichoke Thistle in the grasslands:

If you’ve read other posts in this blog, you’ll know I have mixed feelings about non-natives and invasives — in general terms, that is. I think there’s an argument for taking things on a case by case basis, depending on the non-native.

Thistles are tenacious once they plant themselves. Parks like Briones were literally overtaken by thistles that arrived with crop shipments in the late 1800s. It is an ongoing dilemma and I understand the complexity of grappling with the issue, trying to find least ecologically damaging solutions. At the same time, the hate for non-native species can be violent and unreasonable in some circles. (Read a few blog posts about House Sparrows to see just how hateful.) As a photographer and as a human — member of a virulently invasive species myself — I see things a bit differently through a viewfinder than a botanist would through the scope of scientific necessity.

During the Cosco Busan spill, I did an oiled-bird survey with an entomologist who was abjectly gleeful, trampling the ice plant underfoot. “It’s invasive, walk on it all you like.” Invasives like ice plant are persistent and hearty. At the same time, from a photographer’s perspective, a blooming landscape of ice plant is gorgeous. She’s the plant equivalent of the stunning but ruthless ice queen. As long as she exists, I will appreciate and photograph her.

As with anything in life, there are always those who can capitalize on the spread of noxious seed.

Here’s a local honeybee enjoying a romp on a bull thistle (a different invasive from the one listed above):

There could, in fact, be a pub named The Bee and Thistle, although I couldn’t find it. Purple Thistle, yes. Bee and Thistle, no. It seems too sweet a name when you consider real pub monikers like Butcher’s Hook and Cleaver. And, in any case, a pub named the The Goldfinch and Thistle would be more of a biologically perfect match, given the finches’ attraction to and love for thistle plants.

Finches eat the seed and they also use the thistle down to pad their nests. I photographed these particular finches in Strawberry Canyon — just above UC Berkeley Botanical Garden. Hugh and I ventured onto a small offshoot trail which, it turns out, was a popular pit stop for local runners. Not a good find.

But just beyond that spot was an open field with clusters of the purple-flowering bull thistle. And dotted throughout the clouds of thistle down were some merry old goldfinches (Carduelis psaltria). They might as well have been in their own finch pub for the bird “hoorays” that drifted around the thistle field.

The photo below shows the finches’ methodology. Thye pull the seed and the thistle down from the plant — and quickly extract the tasty parts. 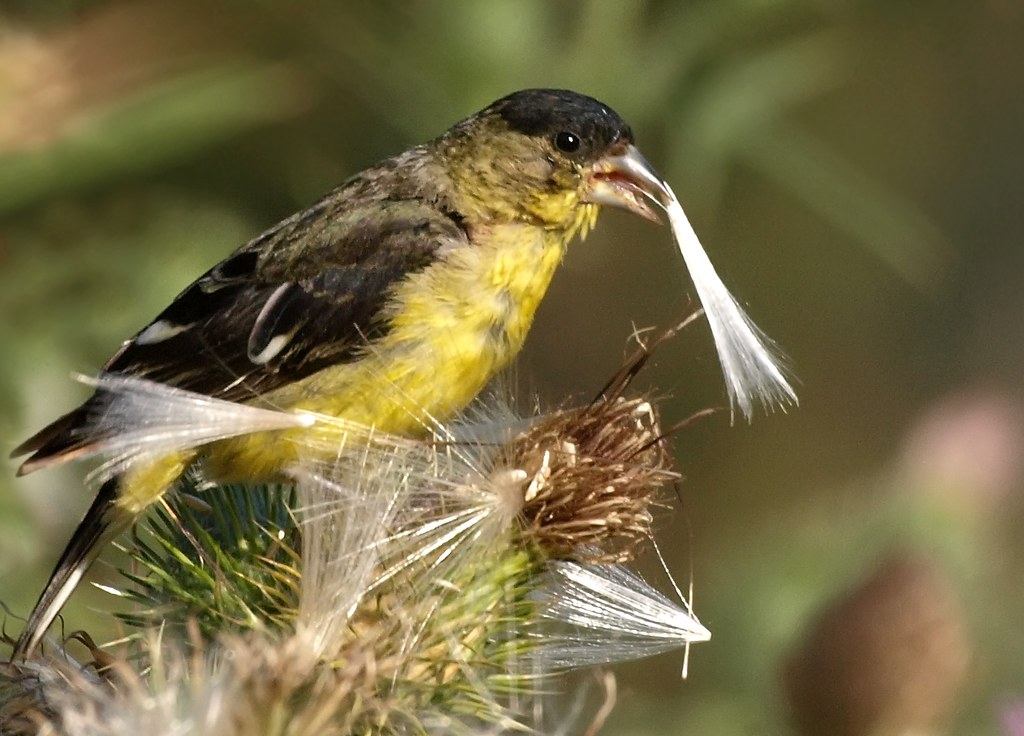 A closeup of the finch gnawing on the extracted seed:

For good measure, the final image is a backlit version of the thistle . . . because, as I say, it’s still a thing of photographic beauty. Even if it has demon plans to take over the world. At the very least, the East Bay.