Off-season, I regularly walk the trail loops at Washington Park Arboretum in Seattle. It’s one of the longer spurs of waterfront access in a city. So, when I’m feeling homesick for San Francisco Bay and the miles of open trails, I find solace at the Arboretum.

In the summer, the human and boat traffic can reach amusement-park levels. Kayaks and canoes are sometimes packed so thick in Duck Bay, they look like the Motor Boat Cruise at Yesterland. 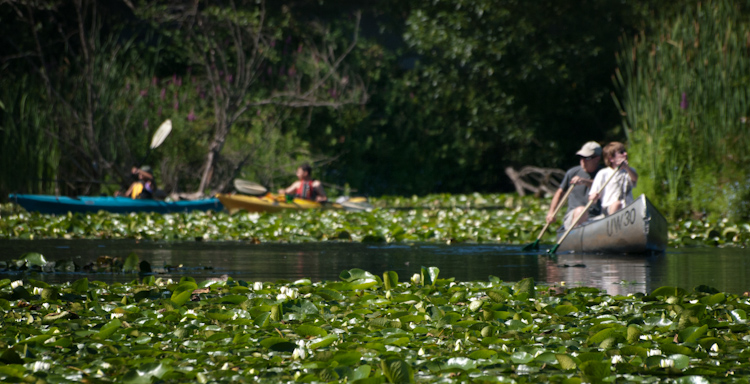 But in winter, the muddy marsh paths are near placid. Because it’s damn cold. It’s an iceberg cold … a ducks-on-ice style of cold.

I have yet to find the perfect gloves for winter photography, so I just let my fingers freeze into Crypt-Keeper hands, then loosen up my joints with the hand warmers toasting my pockets. I plant myself on a dock, with just the occasional jogger passing by, and watch the wintering duck flocks skitter into the private shallows across the lake.

On this particular morning, I caught sight of three male mergansers, Common Mergansers (Mergus merganser), floating in formation along the boat wakes, exhibiting their breeding colors. 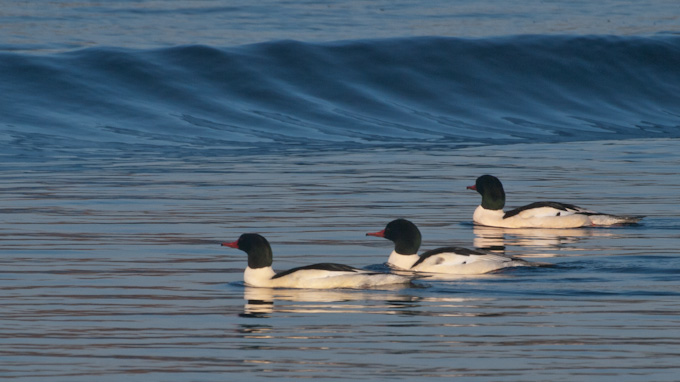 Within the span of 15 minutes, the merganser trio had to ditch nine recreational boats and one loaded barge, all cruising through Union Bay. 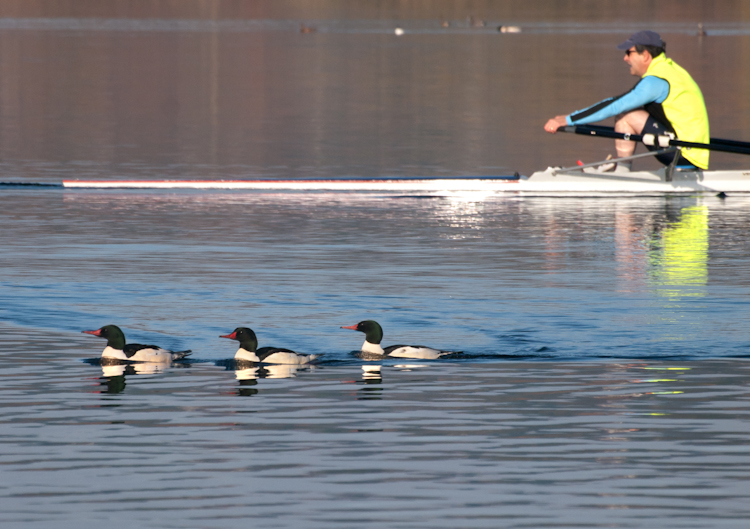 For the most part, they simply floated out of the way. 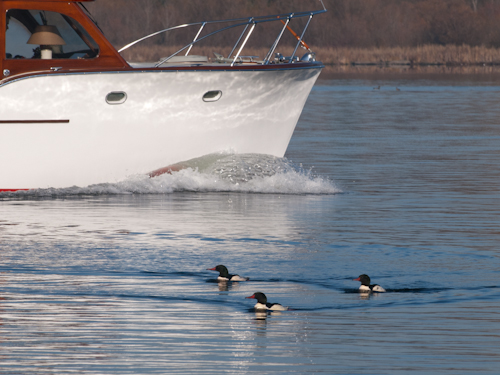 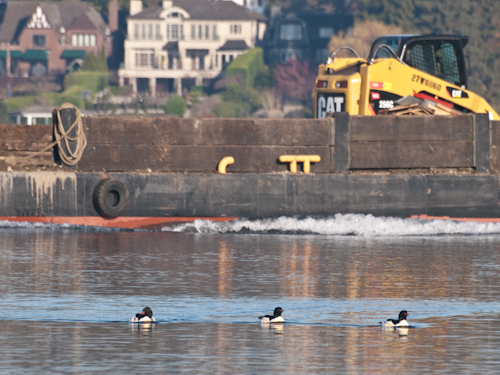 In a few cases, the boys went into panic-paddle mode, in a quick ditch from a hull. They didn’t flush from the area and they seemed to adapt, however imperfectly, to the recreational boat highway that stretches from Puget Sound and Ballard Locks and into Lake Washington. I couldn’t tell how much of a disturbance this was creating in their feeding routine, so I decided to read up on birds and boat traffic.

When we were observing orcas this summer off Vancouver Island, I learned about Washington’s new 200-yard restriction for whale watching boats. Previously, it had been 100 years and remains so in adjacent British Columbia. But, with the Northwest orca populations depleted and endangered, NOAA took measures to further reduce stress from recreational boaters.

So, I knew that. And I’m familiar with the parameters of the Marine Mammal Protection Act. But I had to go digging for some information on how this same recreation affects populations and behavior of water birds. I’ve done most of my bird photography from land and the few times I’ve photographed from a boat, I’m always on edge as the murres, ducks and pelagic birds flap or dive out of the way right when huge vessels are almost on top of them.

If you look for this information, what you’ll find, in large part, are localized studies — in parks or habitat areas specific to one state or zone. I found this piece from Coast and Kayak Magazine particularly interesting since it pertains to the same area where we viewed orcas earlier this year.

The author, Trudy Chatwin is a species-at-risk biologist with the B.C. government. She conducted her own study of boat interference on water birds, using motor boats and kayaks to measure bird responses. Based on her conclusions, she came to an appropriate boat distance — a “single set-back distance based upon the motorboat agitation response threshold of 50 meters.” Her additional recommendation is this:

Kayakers should approach seabird roost and nest sites in a tangential manner, and then paddle parallel to shore at the prescribed distance. The tangential approach is less threatening to birds than either a direct approach or a stealthy approach from behind rocks. Harlequin Duck and Brandt’s cormorant roost aggregate sites should receive an extra 20m buffer to the 50m and have a strict no-landing policy. If so, then disturbance to seabirds from kayaks could virtually be eliminated.

Another paper from Kathi L. Borgmann (Audubon California) looked at 50 published peer-reviewed studies and unpublished studies to assess the impact of recreational boating and other human activities on San Francisco Bay bird populations. From A Review of Human Disturbance Impacts on Waterbirds:

A change in behavior in response to human disturbance was the most frequently cited impact to birds. Reported impacts included immediate effects on birds such as flushing, increased vigilance behavior, calling, and changes in daily activities (Table 1). Often individuals altered their current behavior from foraging or resting to flying or diving as the disturbing agent approached (Table 1). Fifty-seven percent of studies reported birds taking flight or flushing in response to a disturbance (Table 1 and 2). The distance at which individuals flushed when an anthropogenic disturbing agent approached varied considerably by species and by type of disturbance (Table 2). For example, 72% of dabbling ducks flew when pedestrians approached within 50m 20 but Scaup species flew when a ferry approached within 179 m21. Species also respond differently to the same disturbance. In an experimental study conducted in the San Francisco Bay, abundance of Greater and Lesser Scaup and Canvasback (Aythya valisineria) declined after hikers walked along trails adjacent to ponds, while abundance of Ruddy duck (Oxyura jamaicensis), Northern Shoveler (Anas clypeata), and Bufflehead (Bucephala albeola) did not change in response to hikers22.

There are several tables referenced in the excerpt above which are worth reading. They list the impacts, from species to species, based on the types of disturbances noted.

When out in the wilds doing the things that humans do, we can’t help but have an impact. I live by my own set of wildlife photography ethics, but that doesn’t mean I don’t inadvertently disturbed wildlife from time to time. I hate it if I accidentally flush birds or cause undue stress by my presence. Ever see the Chris Farley [how could I be so stupid] interviews? That’s me if I muck up.

Our presence, even if not purposefully disruptive, does affect the behavior of birds. How much it affects their ability to thrive and survive isn’t always easy to ascertain because it’s difficult to measure the precise impact when so many factors come into play. But, keeping distance with all wildlife is the best policy. An ornithologist friend of mine always suggests that if an animal changes its behavior because of you, you are too close. It’s a difficult standard to meet when you consider how little it takes to spook a bird off a trail, as one example. But it’s an ideal to reach for.

These are some of the boat-bird guidelines from the Coast & Kayak article, based on Chatwin’s studies of birds in the waters of British Columbia. Check out the article. How Close is Too Close, for her full list of recommendations.