I was reminded of this poem tonight, by a cricket who hopped on my knee. It’s a poem that takes a while the first time you see it … a nonsensical staircase of letters by e.e. cummings: 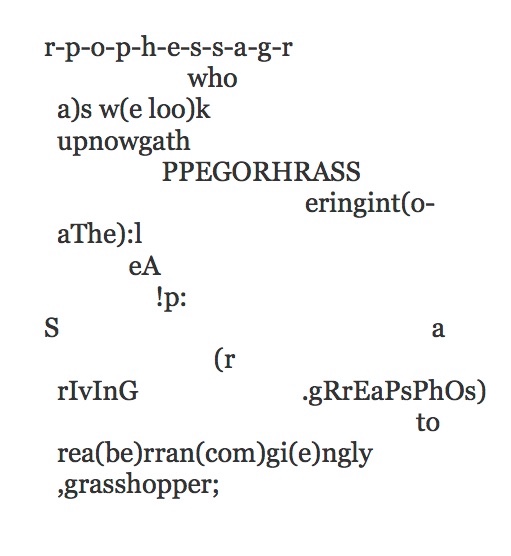 It’s nonsensical until you learn, as OxfordWords blog explains, that e.e. cummings is presenting a “grasshopper in flight in a jumble of letters, mimicking the moment when it transforms from a jumping streak back into the compact, still insect. The word ‘become’ is woven into the word ‘rearrangingly’; the two words exist simultaneously, of equal importance to the course of the transformation.”

A creature leaping and then rearranging itself back to the starting point … it’s what a cricket did tonight while landing on my knee. He looks to be a cricket, with the long antennae, belonging to the order Orthoptera which includes grasshoppers, crickets and katydids.

[IMAGES TAKEN WITH MY iPHONE] 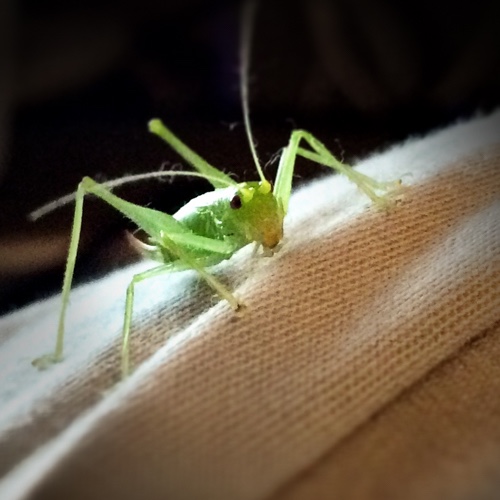 Orthoptera stood and looked at me with his compound eyes, made up of mini eyes, the ommatidia — thousands of little lenses collecting data from different directions with no need to move his head. I had this playing on SoundCloud …

… and I wondered how well his cricket ears processed that sound. They have ears on their forelegs, but they interpret sound through a complex system that can differentiate between vibrations and frequencies.

Scientists at the University of Bristol discovered that the South American bush cricket has hearing mechanisms that rival a mammal’s. The study shows that the bush cricket developed an auditory system “strikingly similar” to those of humans, but using different machinery.

I readjusted in my chair, he still didn’t move. I saw a photo opp in the backlight of my Mac. 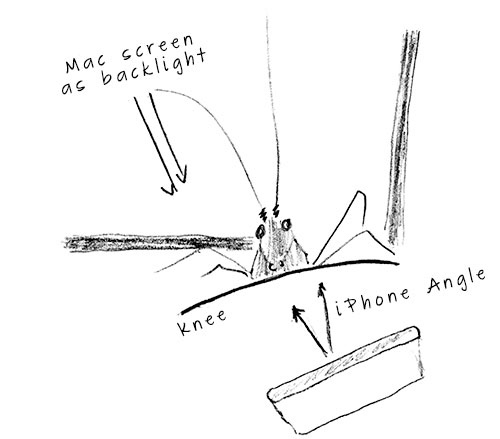 It’s my habit to put bugs outdoors if I know they can thrive out there. I wondered about this cricket, did he need a way out, a free life? I wasn’t sure. I worried about him getting trampled in the house. So I captured him in a glass took him outside — even though a gale was brewing — even though he seemed a bit slow. I’m not sure why I thought a brewing gale would be better for him.

I uncovered the glass and he hopped around inside but didn’t leave. He didn’t seem to have anywhere in particular to go, but I left him out there to find his way.

A few minutes passed and I couldn’t shake the thought of the slow cricket in the tempest. I Googled crickets and indoors and food sources and realized that I wasn’t even sure what type of cricket he was, or if he even was a cricket, or where he actually belonged. I didn’t know if he was healthy or if he’d come indoors for respite. And there I’d left him standing in the dark ‘n’ stormy, a weather system getting so thick, it might as well be dark rum and ginger beer falling from the sky.

I went outside and looked for him with a flashlight. I searched through my glasses now beading up with rain, through pools brimming with storm water. I finally saw him, just a foot from where I’d left him. He was in a shallow puddle, pulling his legs along as if they were dipped in honey.

I slipped him back under the glass carefully and brought him inside. This time, I gave him a choice. I put some twigs and greens in the glass and left it open toward a crack in the door, saying –“you can come and go as you please, stay here or live free in the rain.” Whatever his choice, it would be on cricket time, not mine. 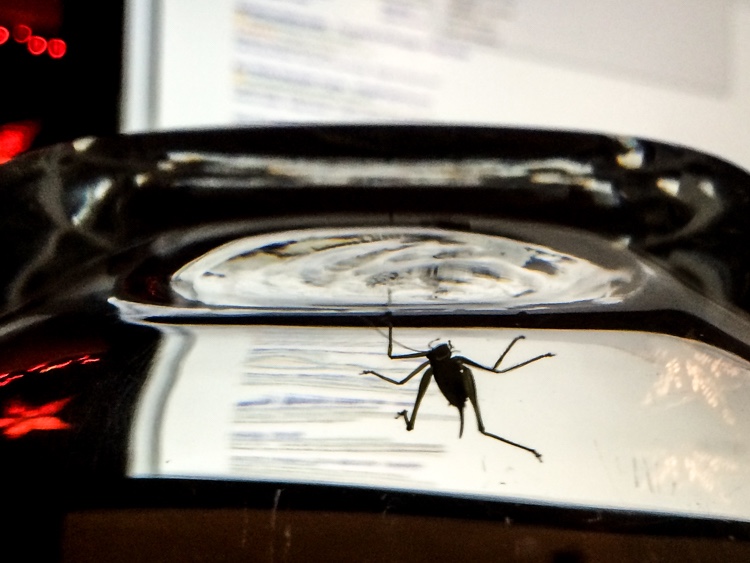 He sat, then circled the glass a few times. Finally, he hopped onto the floor along the path of twigs I’d laid out — and straight up the wall, showing no sign of being anywhere but here.

I’ll look for him in the early morning and see how he feels about starting his day, to see if he feels rearrangingly grasshopper enough — or rather, cricket enough — to leap out the door. And if not, he’s welcome to have shelter here from the storm.