All photos taken at a respectful distance with a 70-300mm Zuiko lens: effective reach, 600mm. 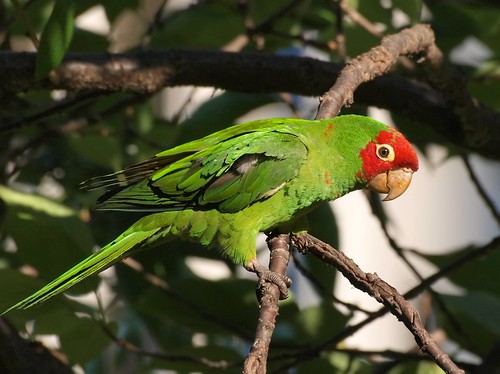 I was meandering toward Market in San Francisco, and decided to detour toward the familiar squawks of the wild parrots — one of my favorite San Francisco sounds. As I approached the area where the Red-masked Parakeets clustered and played on light posts and street lights, I noted a big group people. It appeared they were trying to nab themselves a parrot. Their efforts were clumsy and I didn’t think they had a chance — but I didn’t want to take that chance.

I sat for a moment with my camera, snapped their license plate (just in case), then walked a short distance away. I suspected they’d be at it again once I was out of sight. So, I rounded a corner where I was still able to see them — and sure enough, they were chasing the birds. I grabbed my mate who was ambling my way, and we headed back over together

They had their arms outstretched with food for the birds – a violation of the San Francisco “no feeding” ordinance but a breach that tourists sometimes unknowingly commit. I told them of the city rule. They shot back “get lost and mind your own business.”

They behaved while we were around, with the exception of taunting us by pretending to lunge for the parrots. So, we decided that sticking around to keep an eye on the parrots was the only option.

We stayed underneath the murmuring parrot trees until the people drove away with their out-of-state super van. Until after dark — just to make sure they didn’t come back. And then we notified a few parrot protectors we knew who’d keep an eye on the birds for the next few days — to be sure they didn’t try it again.

Most Bay Area residents will recall the controversy that arose over the feeding prohibition. One of the arguments for prohibiting parrot feeding spoke to this very type of situation. Habituated wild animals of any kind — although admired and respected by the majority of people — are always in danger from those unscrupulous few.

What do you do if you happen to witness something like this? Give San Francisco Animal Care and Control a call and let them know what’s going on. If there’s a local law enforcement officer nearby, see if they might be able to help. If you’re comfortable approaching people and it seems safe to do so, you can let them know it’s against the ordinance to feed the birds — which might help. But definitely don’t antagonize or put yourself in danger.

These types of things tend to happen in unguarded moments and hours. These people knew enough to stop their activity when someone else was watching.

If you haven’t yet seen the brilliant documentary about San Francisco’s parrot flocks you’re probably not from San Francisco. Even if you are from SF and somehow missed this now classic city gem, get yourself over to the Wild Parrots of Telegraph Hill website and grab a copy. Or read Mark Bittner’s detailed account of the parrots in the book by the same title. 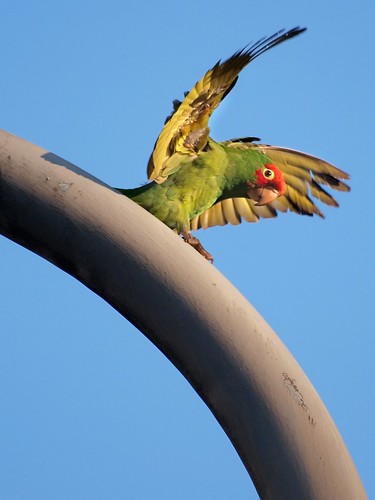 The parrot pictured above, was sliding down a light pole, reaching the bend, then flying off to start again. A precious moment in city parrot life.