A Day in the Life of a Corpse Flower

A Day in the Life of a Corpse Flower

It’s supposed to smell like rotting flesh, hence the name. But during our visit with the corpse flower (Titan arum) at UC Berkeley Botanical Garden, the plant was nice enough not to pulsate and stink up the joint. The smells come in pulses, often more pungent at night. A gardener at the Brooklyn Botanic garden had to wear a respirator while getting intimate with Brooklyn’s own Titan arum flower. 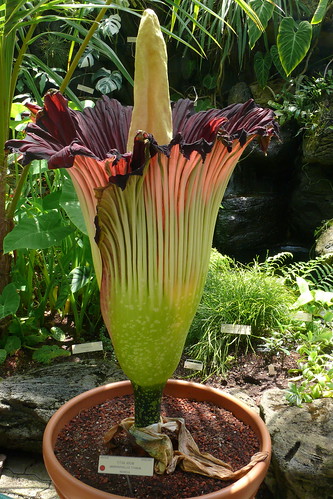 The Titan’s smell serves a evolutionary purpose: it attracts beetles who love carrion. The bloom is short-lived. It remains open for just a few days, the pungent odor dissipates, and the bloom closes up again.

It can be years between blooms, so the giant is always an attraction when it puts on its show. After the height of its bloom, this is the collapse that becomes the bloom of the Titan:

In its collapsed state, the large petals wrap around the fruit ripening within the plant:

The Botanical Garden has a beautiful visual timeline of the Titan Arum’s life and cycles.