The color white represents catharsis in alchemy. It’s the point at which a blackened substance, through heat and reactivity, develops a white crust and then puffs into a cloud inside the alchemist’s flask. It’s the stage at which future possibilities become apparent as a material is transformed from one to the other. And it’s symbolized by a white swan or white eagle.

In Arthurian tales, it was believed the elusive white hart (or stag) could not be caught. The white hart symbolized a never-ending quest for knowledge, for the unattainable.

In Celtic myth, a white boar led St. Cadoc and his monks to the proper building site of his future monastery.

Caladrius, the snow-white bird of Roman mythology, could draw illness from a man by just looking at him, then send the ailment adrift into the burning sun.

White animals are mystical, transformative, spiritual and sometimes foreboding in ancient yarns. Pegasus and unicorn — white horses, winged or horned — both elevated heroes, goddesses and saints above the fray, upon their magical hooves.

So, what was I to think when I saw the White Gallopavo? Was she, too, signaling catharsis and transformation — leading me to great fortune or to my preordained fate? And if so, when I write my own personal myth, will I tell people that I met my true destiny while crossing the roundabout of a California housing development?

Here’s the vision of White Gallopavo — the whitest I have ever seen.

In fact, this is the only white Wild Turkey — Meleagris gallopavo — I’ve ever seen. And this bird was shadowed by three flock-mates in various stages of similar whiteness. 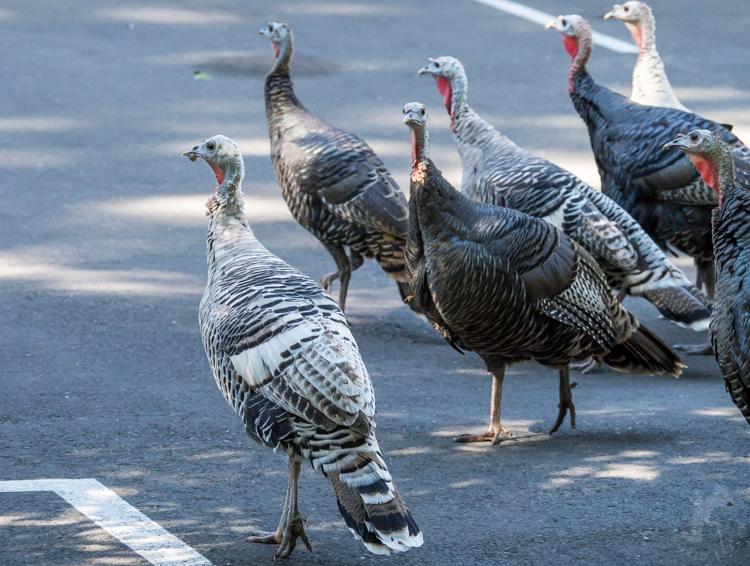 This group of Wild Turkeys roams my friend’s California neighborhood, a location I won’t disclose simply because I hear these white birds are sometimes coveted by the wrong people.

The turkeys forage for greens and snails and other items on the suburban/urban lawns, all under the generally appreciative watch of local residents. 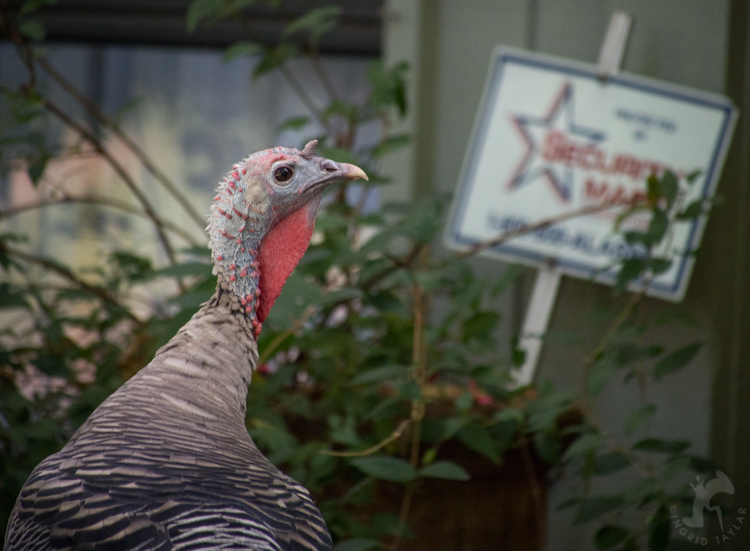 Contrary to popular impression, there is apparently no evidence that these birds are wild-domestic hybrids — breeding with white farm turkeys. They are known as smoke-phase or white-phase turkeys, exhibiting the color traits of a recessive gene. The majority of white Wild Turkeys are also female. This turkey appears to have a beard but no spurs and  perhaps a few feathers on the head. Would you identify it as a male? 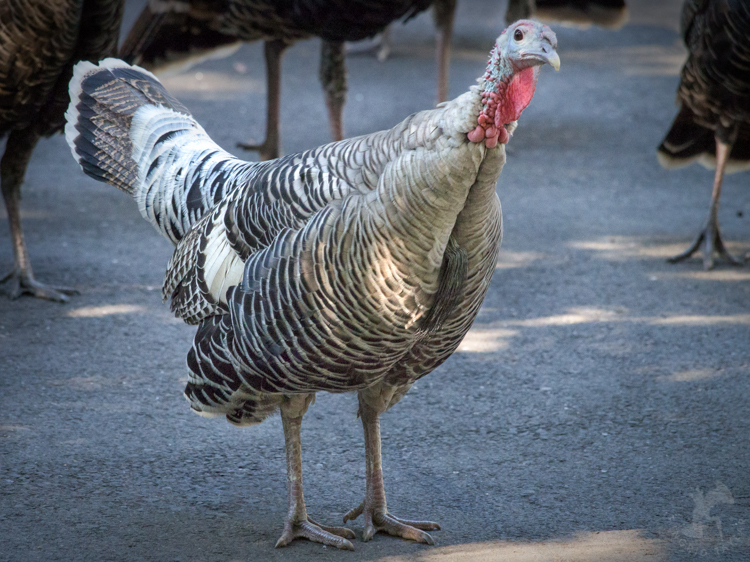 In Native American texts, Turkey had grand responsibility, either as the bearer of flame or the giver of agriculture.

A White Mountain Apache tale about the origin of corn describes how Turkey gave corn to human beings by shaking seeds of the four different colors of corn—black, blue, yellow, and white—from his feathers. In a Cherokee myth, when Turkey gave fire to the world he singed off his head feathers, which explains why turkeys are bald.

In one Seminole story I read, Turkey got his beard by way of a scalping. In a Cherokee story, Turkey convinces a Terrapin to hand over a scalp that Terrapin brought back from war. The Wild Turkey’s history is animated through myth, integral as animal spirits are in cultures beyond our own. They reside alongside human animals as messengers, deities, tricksters and teachers. And, in the case of white animals, they are uncommon enough as to stir imaginings of grandeur.

We ambled alongside our turkey companions who seemed to mind us none. Like uninvited busy bodies, we held traffic for them on a road where the turkeys, accustomed to this neighborhood, had crossed a thousand times without our assistance.

Above a parking lot, they saw this specter in a tree long before we did. They turned a collective eye upward, guiding our own eyes to the yellow talons. 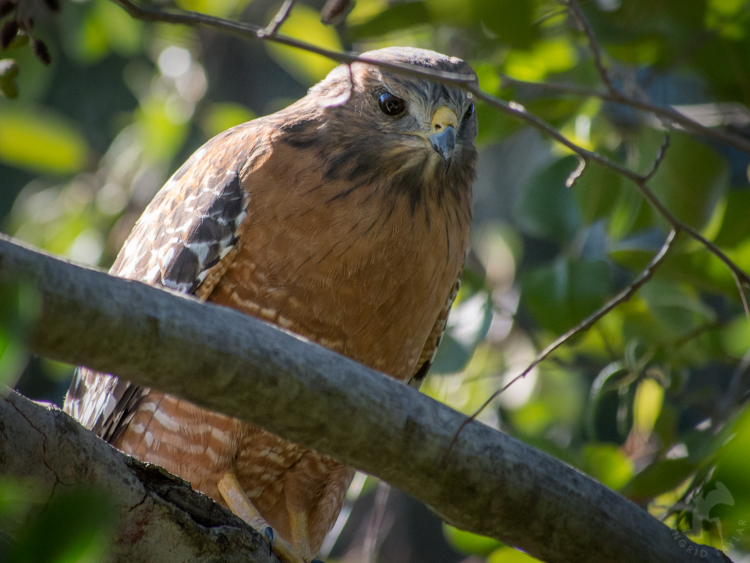 At that point, we left the turkeys — white, gold, black and red — to graze in peace on the median, as the Red-shouldered Hawk flew out from under the gaze of ten turkeys and three humans. Whatever significance I might assign to the Great White Gallopavo, as soothsayer or symbol, a Wild Turkey is a natural enchantment regardless. We used to listen for them in the California brome, sage and chaparral of the Berkeley hills. We’d often find them, too, at sunset, roosting on rooftops, shrouded in San Francisco fog,  draped in whiteness — and looking, actually, like giant cloud puffs in an alchemist’s flask.